Accessibility links
The Secret's In The Sugar: Lower-Alcohol Wines Are Taking Off : The Salt This summer is bringing a bumper crop of lighter, more subtle wines like Vinho Verde, Riesling and Txakoli. While lower in alcohol, these wines are also winning fans for their low cost. 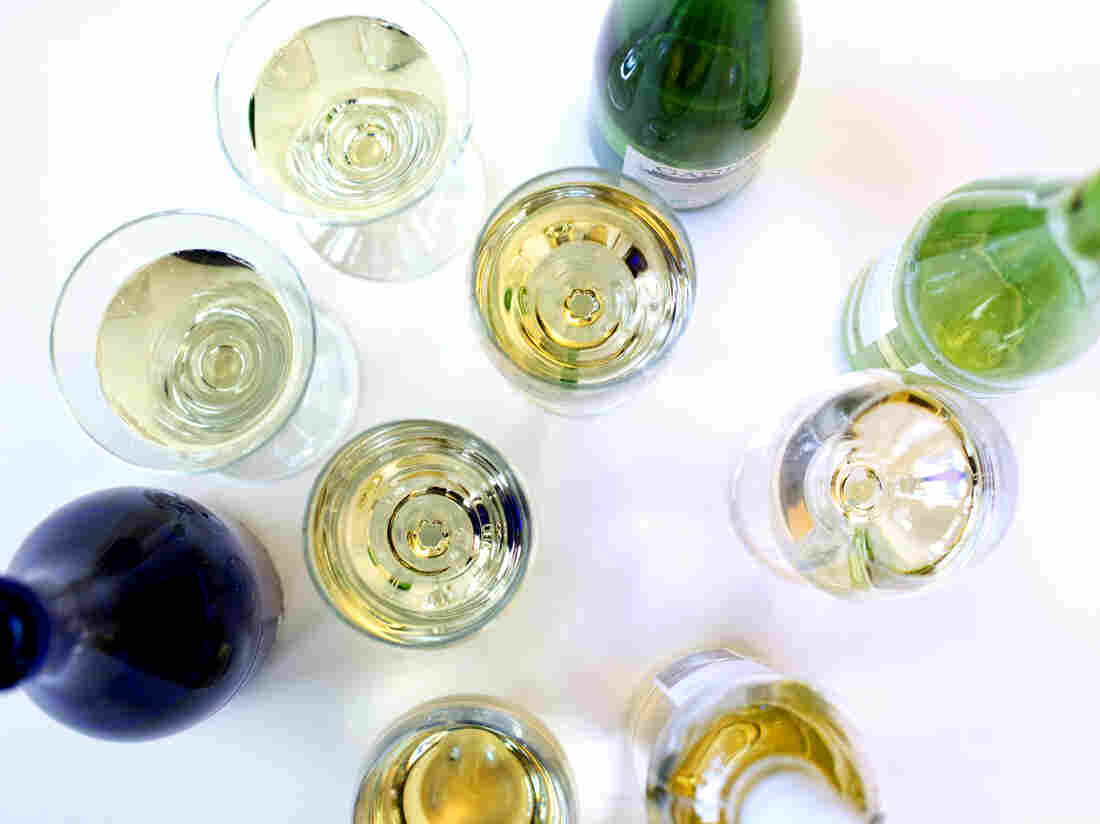 A selection of low-alcohol wines, including a Riesling from Germany, a Vinho Verde from Portugal and a Txakoli from the Basque region of Spain. Meredith Rizzo/NPR hide caption 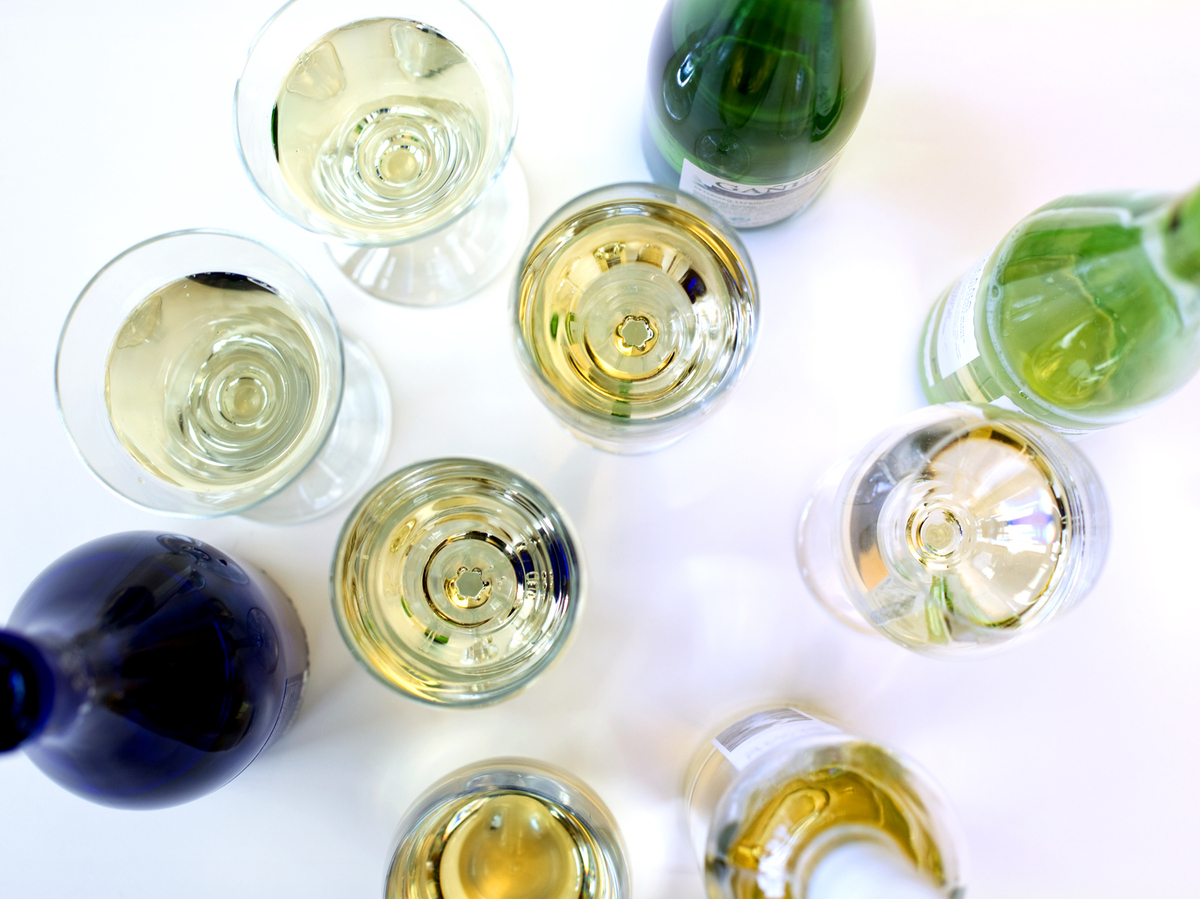 A selection of low-alcohol wines, including a Riesling from Germany, a Vinho Verde from Portugal and a Txakoli from the Basque region of Spain.

Big, bold wines have their fans. But with the arrival of summer, make room for a bumper crop of lighter, more subtle wines.

There's Txakoli, or Txakolina, wines from the Basque region of Spain, Rieslings from Germany and New York state, and Vinho Verde from Portugal, to name a few.

These wines typically hover in the 9 percent to 11 percent alcohol range. This compares to about 13 percent to 14 percent in a typical California chardonnay.

So, what explains the trend? For starters, "budding wine aficionados are more cash-strapped than their predecessors," Cole says. And these same consumers also value novelty: "They want to look around the corner to new wines, made from quirkier, more obscure grapes," she says.

Cole says a Txakoli may offer more "bang for the buck than, say, an over-oaked, overpriced, higher-alcohol California chardonnay." And she says other wine grapes Americans aren't as familiar with, such as gamay noir (a high-yield grape used to make Beaujolais), are gaining traction too. One producer is a small Portland-based winery, Bow & Arrow.

There are several factors that determine alcohol levels. The climate and grape varietals play a role. And winemakers have several techniques that can manipulate alcohol concentrations.

For instance, they can halt the conversion of sugar in the grapes to alcohol, keeping more sugar in the wine. Moscato wines, which are known for a signature sweetness and have gained popularity in recent years, are a good example of that.

In other cases, winemakers use grape varietals that don't concentrate high amounts of sugar. And they can adjust how long grapes stay on the vine.

"Lower alcohol is indicative of grapes that were picked not overripe but maybe just [barely] ripe," Broglie says. 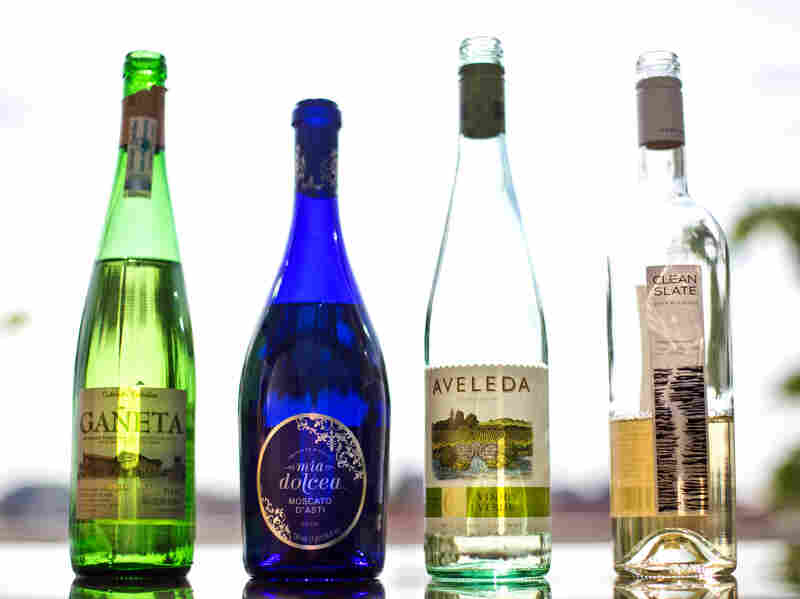 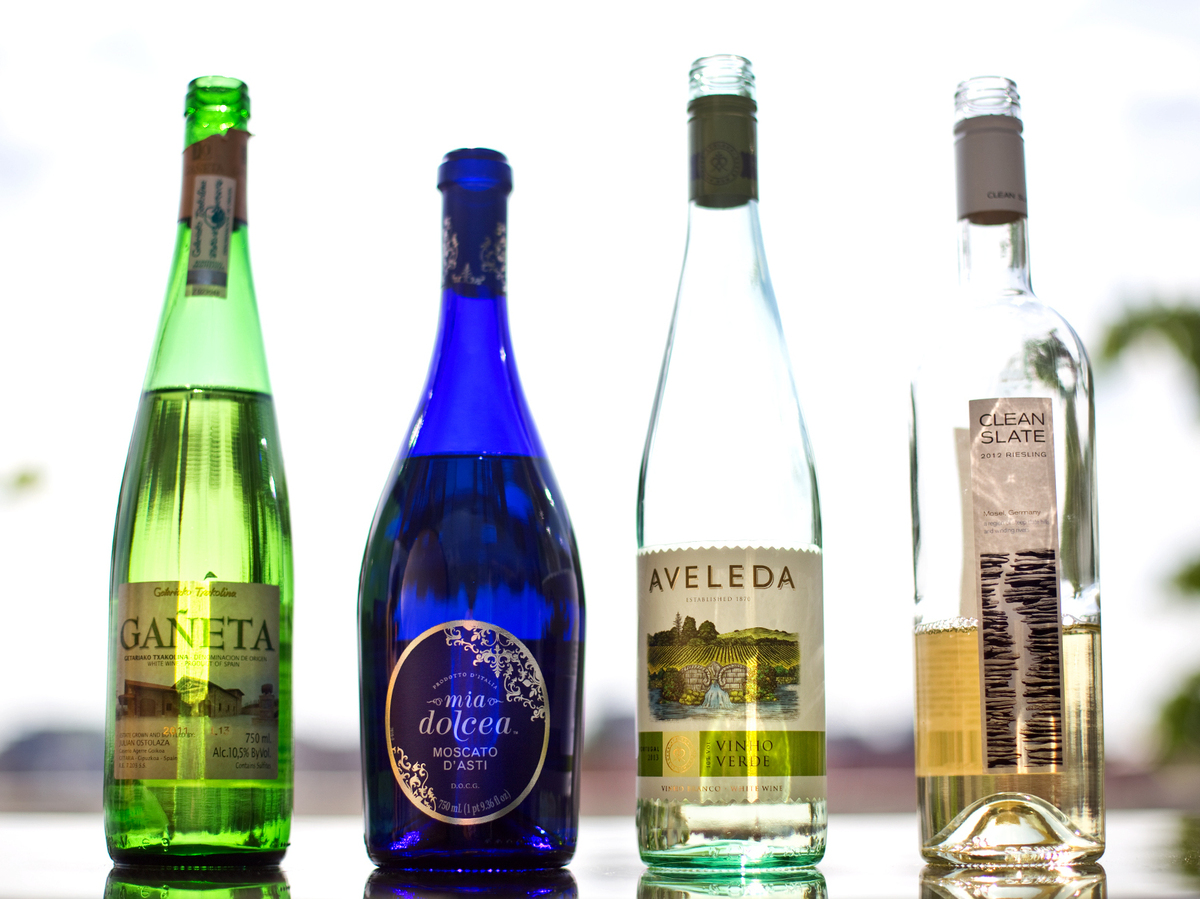 Vinho Verde — which translates from the Portuguese as green wine, or young wine — is a good example. These wines, which have been dubbed "cheap and cheerful" by New York Times wine critic Eric Asimov, are traditionally produced from valley-grown grapes that don't get super ripe, so sugar concentrations are lower. And since it's the sugar that converts to alcohol, as a result there's less alcohol.

And why the lower price points? In the case of Vinho Verde wines, part of the story is geography.

Portuguese winemakers can produce wine more cheaply compared with, say, French winemakers. In part, there's not as much pruning or fussing over the grapes.

And unlike champagne, which is aged before it's sold, Vinho Verde is produced to be consumed quickly.

Some wine critics love Vinho Verde, and say the good value is not lost on consumers. Imports into the U.S. have risen quickly.

Cole says, in many instances, "higher-alcohol wines can cost more because they're made from grapevines that have been pruned down to squeeze the highest concentration of flavor from each berry." And the cost of the labor behind this intensive technique can add up.

The move to lower alcohol concentrations is not just about cost. In fact, often it's an afterthought. What's driving the trend is changing preferences in wine styles.

Broglie says after years of winemakers pushing the envelope to produce overripe grapes that make bold, hit-you-over-the-head wines, the tide has turned.

"Now we're seeing a natural trend in the other direction, to more subtlety in wines," Broglie says. "And I see this continuing."

Wine writer Dave McIntyre agrees. "There is a move to roll back alcohol levels from the blockbuster 14 to 15 percent and higher wines so popular the last 15 years or so."

And in other cases, the move to more balance and subtlety has winemakers experimenting with all kinds of techniques.

McIntyre profiled a New Zealand producer who makes a sauvignon blanc and a Riesling at about 9 percent alcohol, which is 25 percent lower than what's typical. "And he does nothing more than picking some leaves off the vine to inhibit sugar growth."

The lower-alcohol trend goes beyond just vino. Beer-wine crossovers are starting to catch on. For instance, Odell Brewing in Colorado makes a Riesling-pale ale mashup with 7.6 percent alcohol. And newer takes on hard ciders such as Snake Bite, with 5.1 percent alcohol content, are getting notice too.

But don't expect to see a downward trend in alcohol in many red wines.

"The low-alcohol reds are a challenge for winemakers," explains Andrew Waterhouse, a professor of oenology at the University of California, Davis. "[Lower-alcohol wines] have a more subtle complex taste and higher acidity than wines made from riper grapes."

And he says the trend has been that most consumers prefer the distinctive fruity tastes that arise in very ripe red grapes.