Accessibility links
Can Farmed Fish Feed The World Without Destroying The Environment? : The Salt Farmed fish production will have to more than double by 2050 to keep up with global demand, a report finds. And aquaculture can be far more sustainable than meat production, the researchers say. 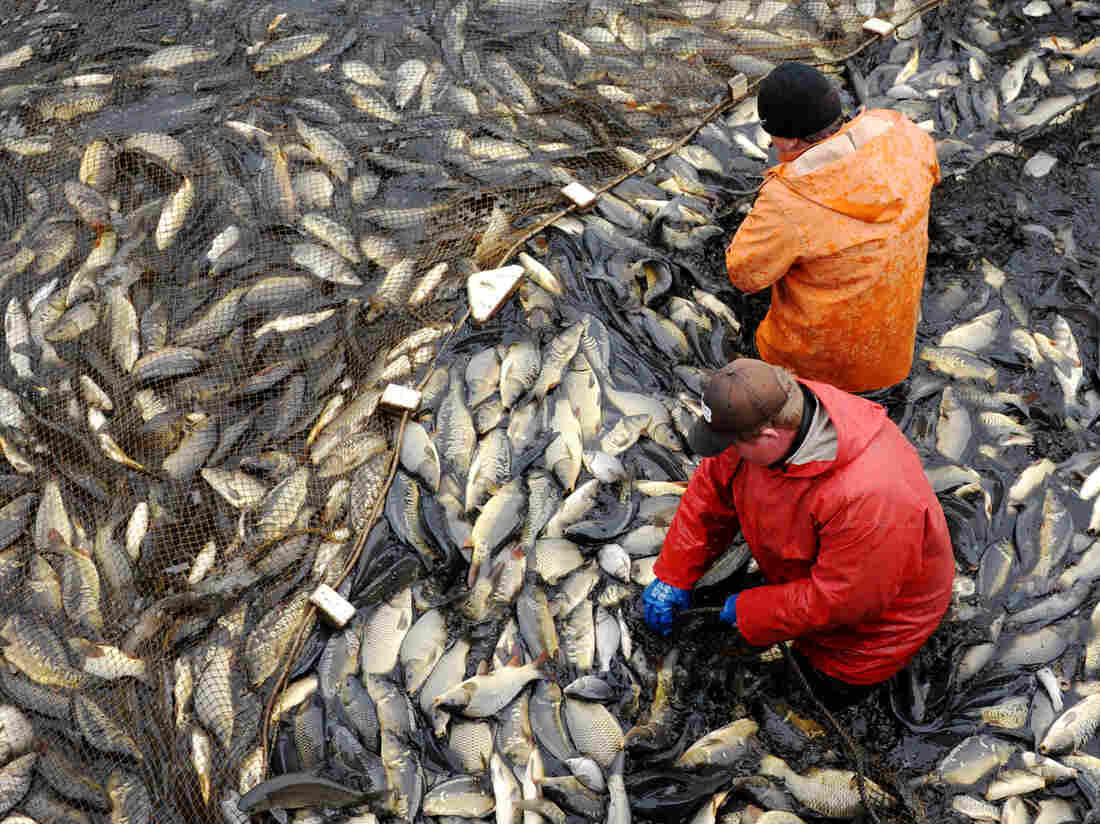 Carp are collected at a breeding farm near the Belarus village of Ozerny in November 2013. Researchers say there's a lot the aquaculture industry can do to be more efficient. Viktor Drachev/AFP/Getty Images hide caption 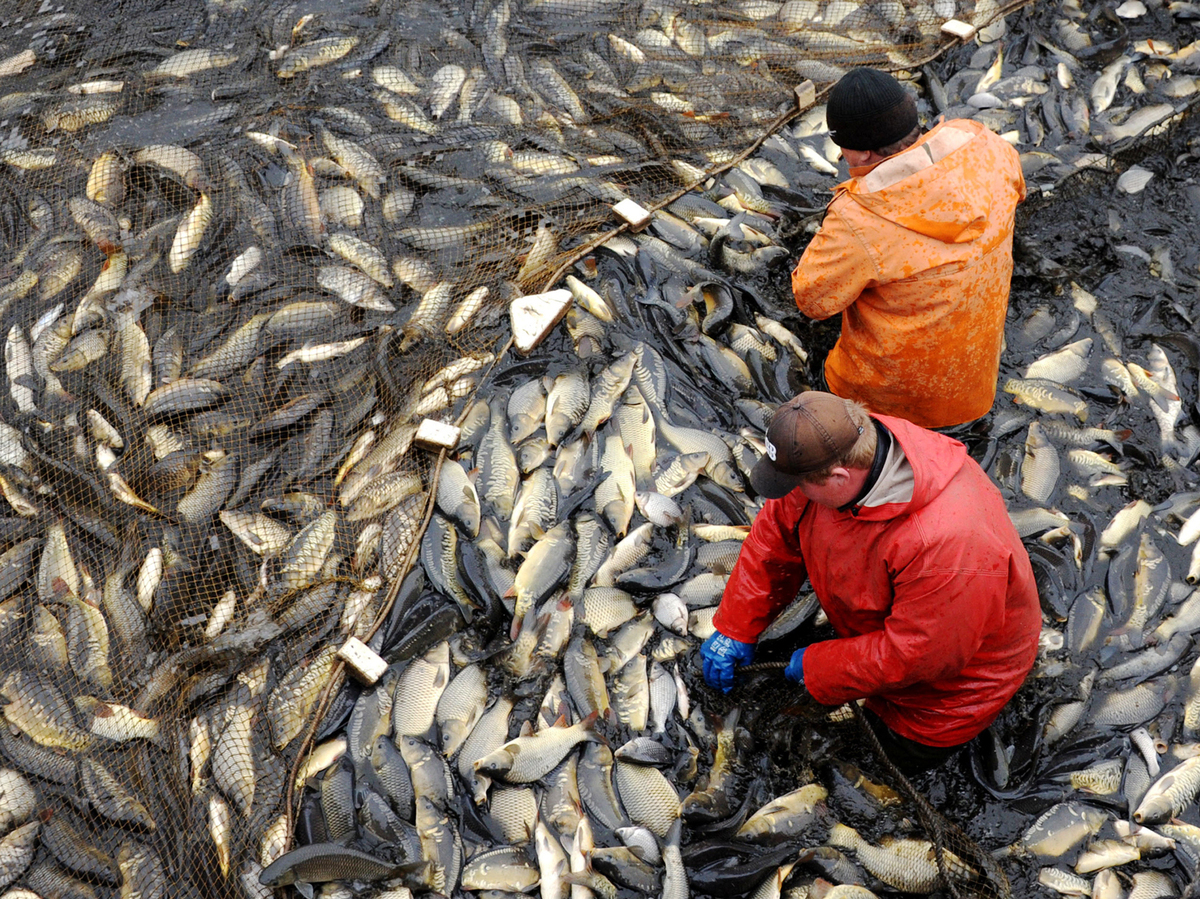 Carp are collected at a breeding farm near the Belarus village of Ozerny in November 2013. Researchers say there's a lot the aquaculture industry can do to be more efficient.

We Americans love our fried shrimp, our sushi and our fish sticks. And a lot of other people around the world count on fish as a critical part of their diet, too. According to the Food and Agriculture Organization, fish now accounts for almost 17 percent of the world's intake of protein — in some coastal and island countries it's as high as 70 percent.

To keep up with the world's growing population and its appetite for seafood, we can't just rely on wild fish. Already, we're getting more of it from aquaculture.

And that farmed fish production will have to more than double by 2050 to meet demand, according to a report by the World Resources Institute. The potential environmental implications of that are pretty daunting. 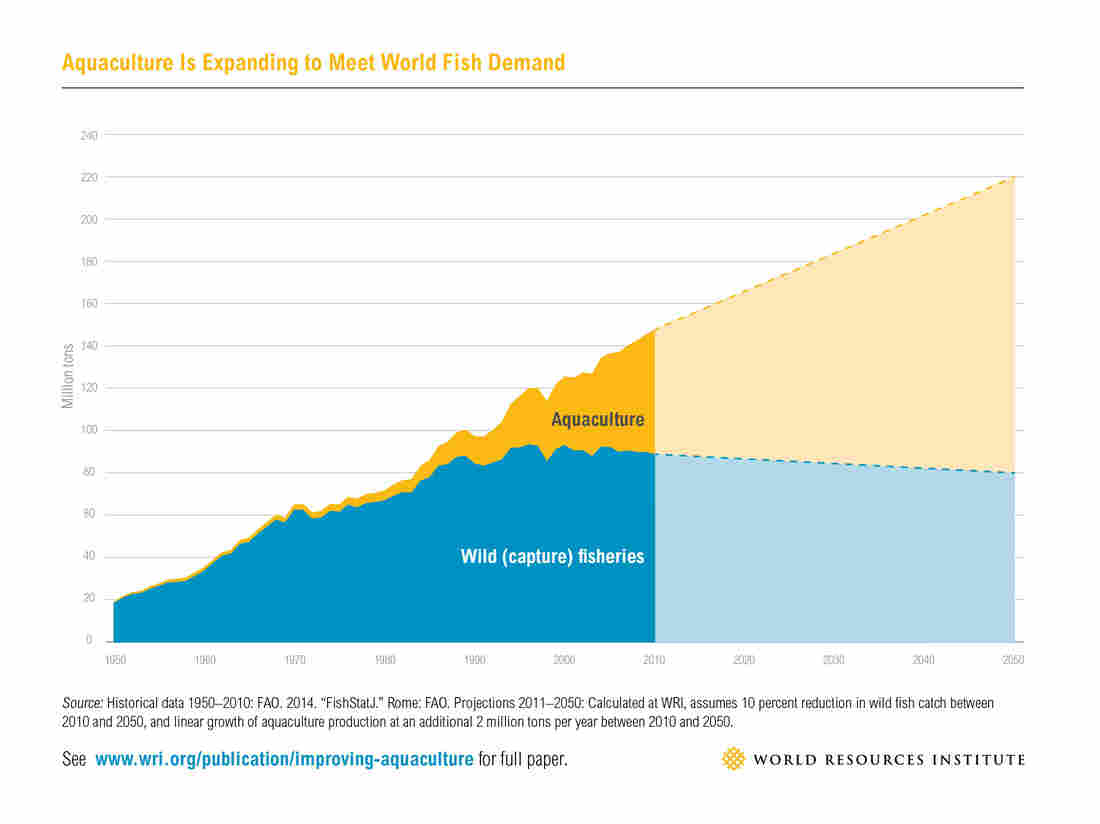 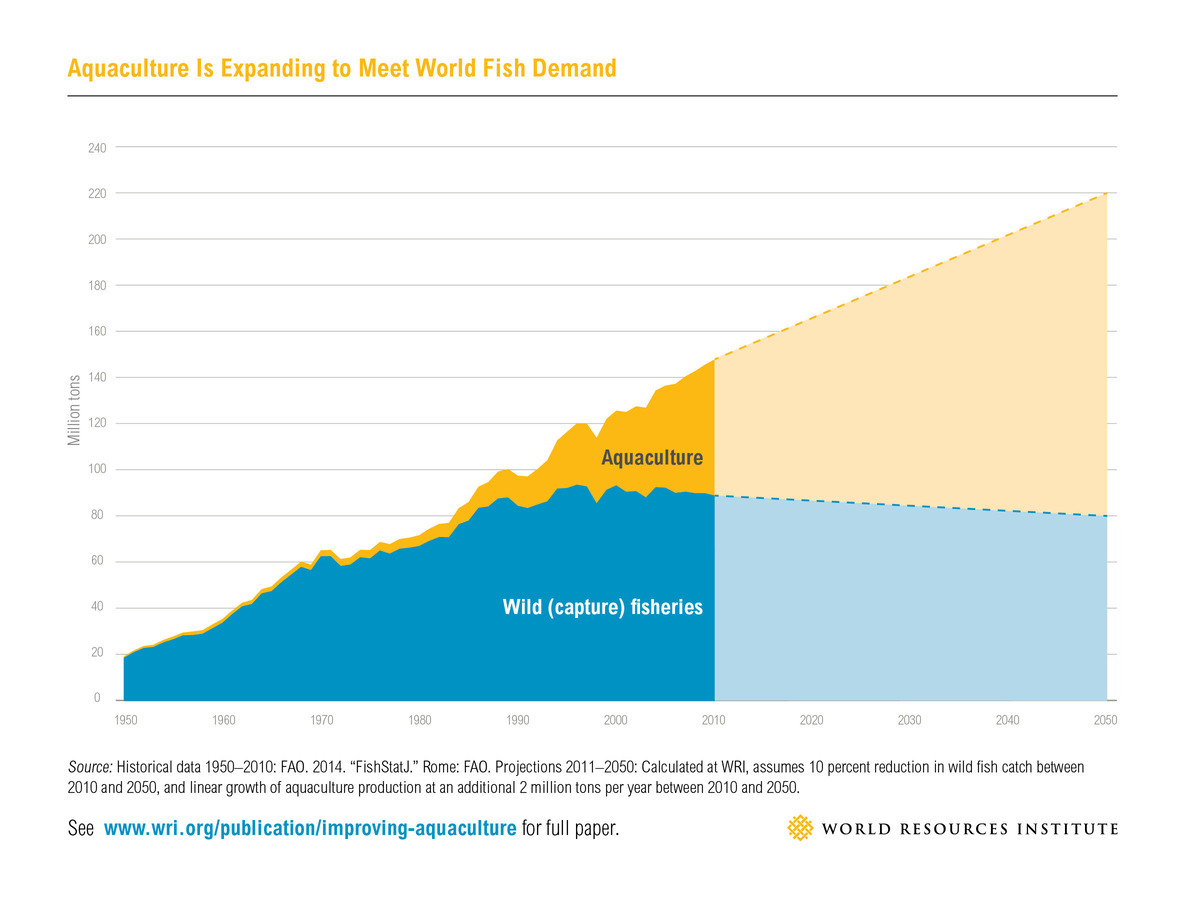 "The world's oceans and rivers and lakes are fished to their limit," says Richard Waite, a researcher with WRI. So the aquaculture industry has to step up, he says. "But if [aquaculture] were to more than double, and we don't improve the sector's efficiency, its environmental impact will double as well."

But if it's done right, aquaculture can grow without taking a major toll on the environment, the WRI researchers say.

Fish and shellfish are already among the most eco-friendly sources of animal protein, Waite tells The Salt. They don't emit anywhere near the amount of greenhouse gases that cows do, and most farmed fish convert feed into edible meat very efficiently.

But large-scale aquaculture can have significant environmental consequences. It can take a lot of wild fish to feed certain farmed fish. And when tons of fish are crowded together, they create a lot of waste, which can pollute the ocean. Fish farms can also be breeding grounds for disease. Plus, shrimp farming in Indonesia is at least partly responsible for the region's declining mangrove forests. 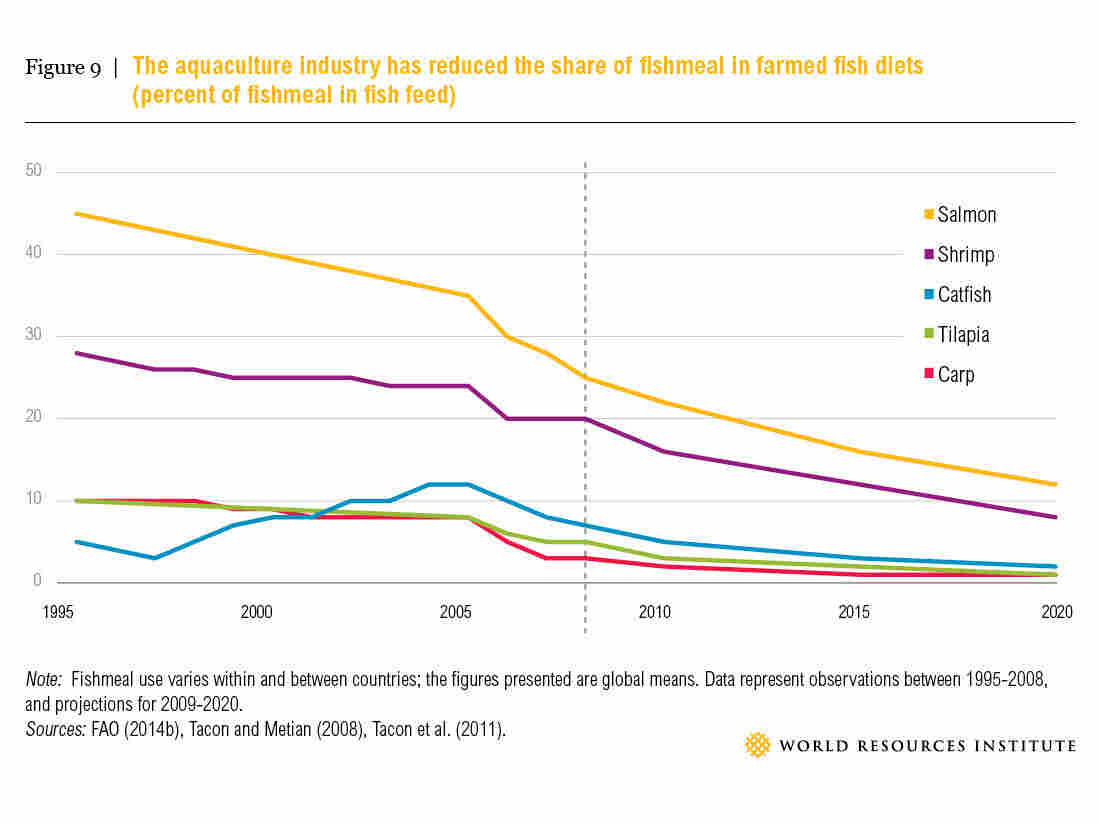 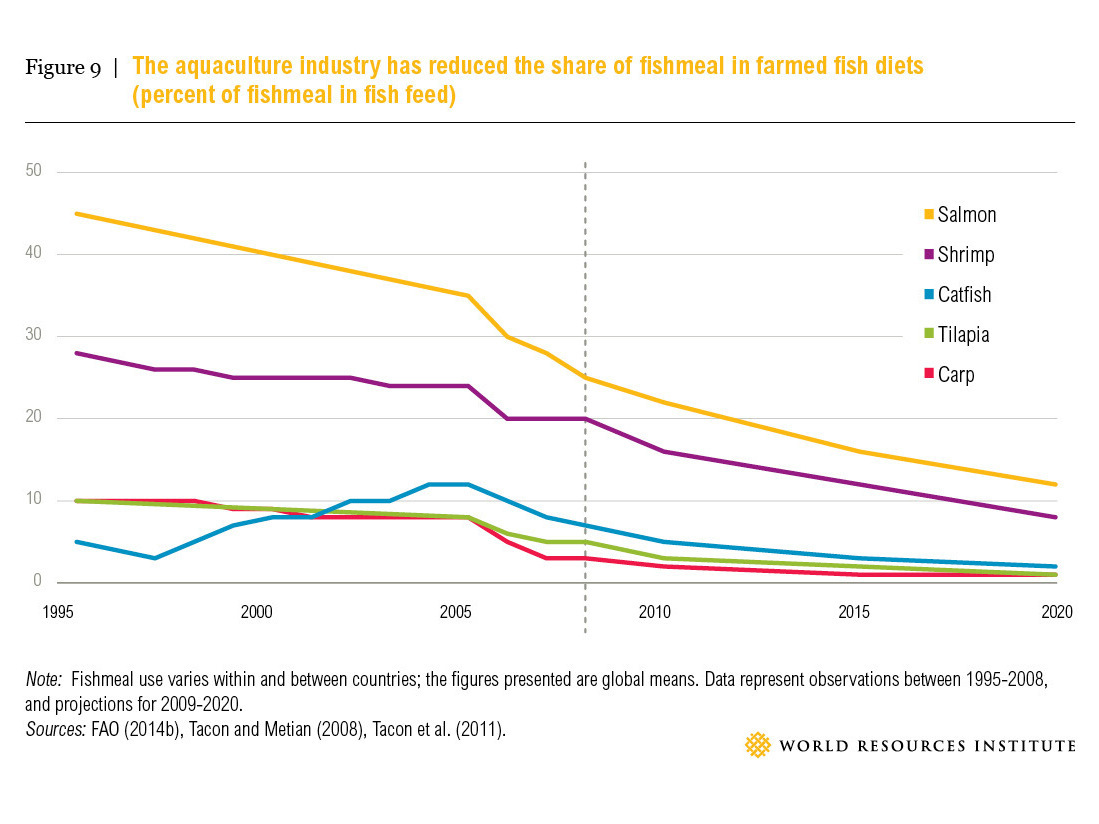 It doesn't have to be that way, the researchers say. "There's a lot the industry can do to become more efficient," Waite tells us.

Some are trying to boost efficiency by building fish factories on land, as NPR's Dan Charles reported in April.

Re-evaluating what we feed farmed fish will also help a lot, Waite adds. Over the past 20 years, farms have greatly reduced the amount of fish meal they use in their feed, the report finds. As we've noted, a few salmon farms in South Africa are replacing fish meal with fly meal to take fish farms' pressure off the oceans.

And while fish farmers will naturally want to become more efficient and productive, since it makes them more money, Waite says, it also helps when governments provide incentives to adopt sustainable practices.

What can consumers do?

The report recommends eating more seafood that's lower on the food chain. Tilapia, catfish, carp — as well as mollusks like oysters, scallops and clams — don't require as much feed. "Mollusks are the planet's most environmentally sustainable source of animal protein," Waite says. "They don't use any land, they don't use any freshwater and they actually clean up the environment around them."

Overall, Waite says, aquaculture doesn't have to be destructive. But it's also not a panacea for the environment or world hunger. "It can be done well or it can be done badly," he says.