Accessibility links
The Salad Frontier: Why Astronauts Need To Grow Lettuce In Space : The Salt With the help of grow lights and air exchange fans, NASA is growing lettuce on the International Space Station. The scheme could help keep food costs down — and keep astronauts happy tending plants.

The Salad Frontier: Why Astronauts Need To Grow Lettuce In Space

The Salad Frontier: Why Astronauts Need To Grow Lettuce In Space 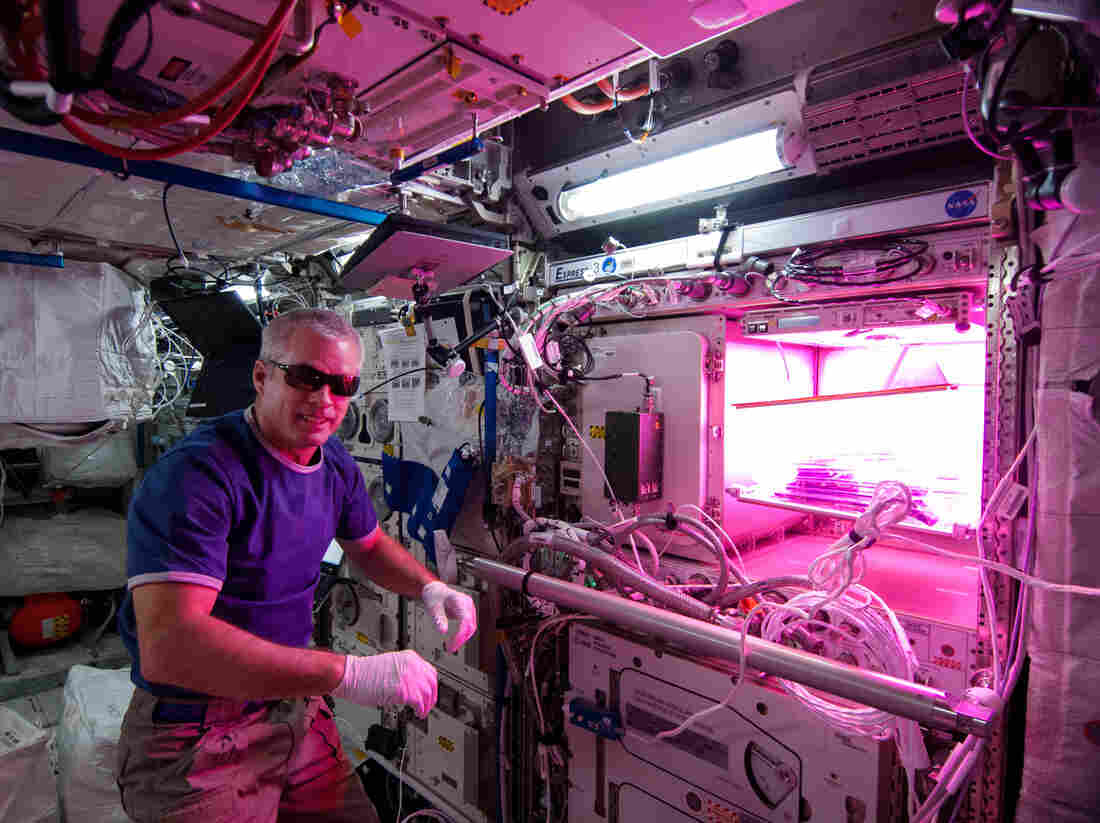 Astronaut Steve "Swanny" Swanson tends to lettuce plants growing at the International Space Station that may one day make it into his salad. Courtesy of NASA hide caption 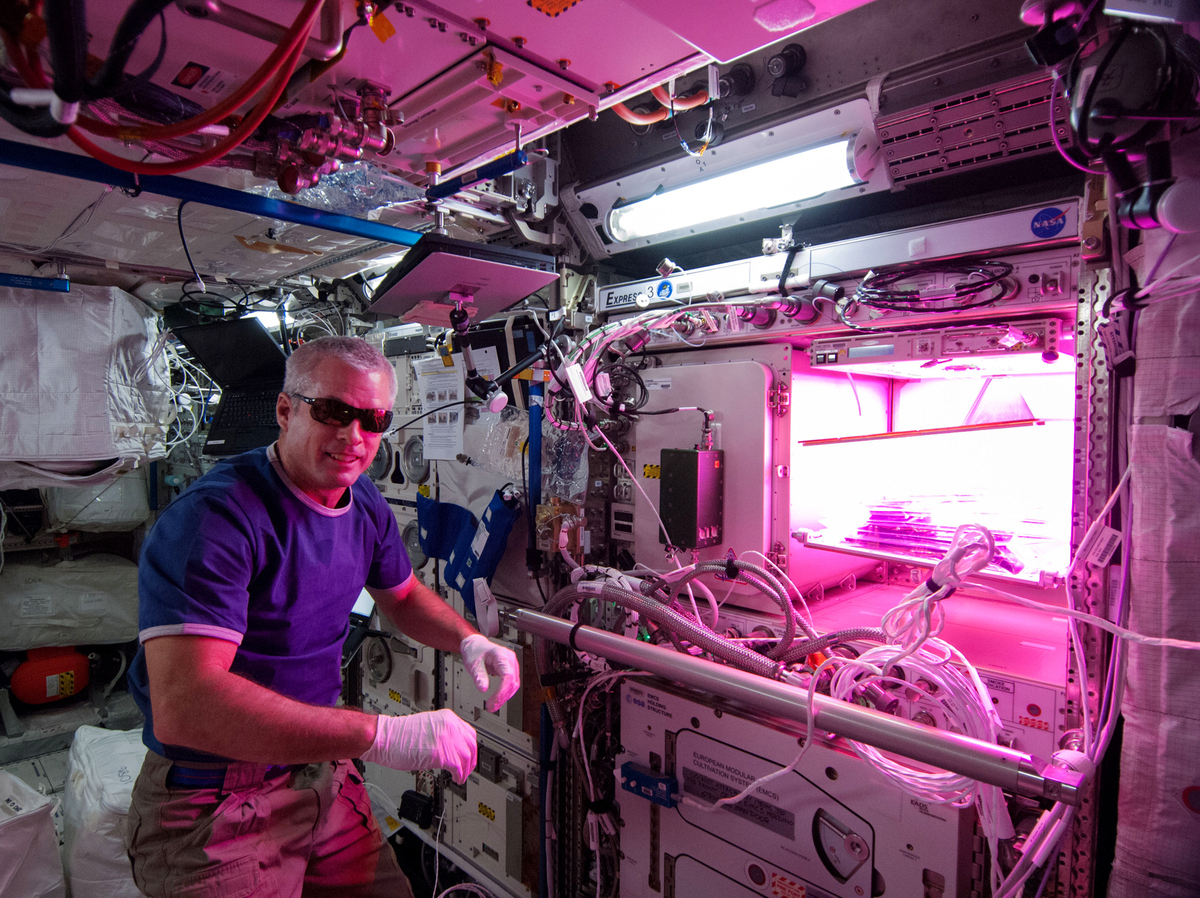 Astronaut Steve "Swanny" Swanson tends to lettuce plants growing at the International Space Station that may one day make it into his salad.

Astronauts who spend months on end in space sure do miss their greens. That's why NASA is embarking on a program to get astronauts growing their own food. First stop is the International Space Station and a vegetable production system called Veg-01, or "Veggie."

We've brought you stories before about cooking food in space and why astronauts love hot sauce, but as for growing food, NASA is just in the seedling stage with Veggie.

Veggie is a 1.5-foot-long capsule that glows like an otherworldly purple jellyfish. Inside are six Outredgeous lettuce plants (a red Romaine variety), some growing better than others, NASA says. They are scheduled for harvest Tuesday.

The eerie purple glow comes from grow lights similar to those used in greenhouses on Earth. Veggie has 132 red, 32 green and 32 blue LED lights, says Gioia Massa, the scientist in charge, to get the plants going in the right direction. 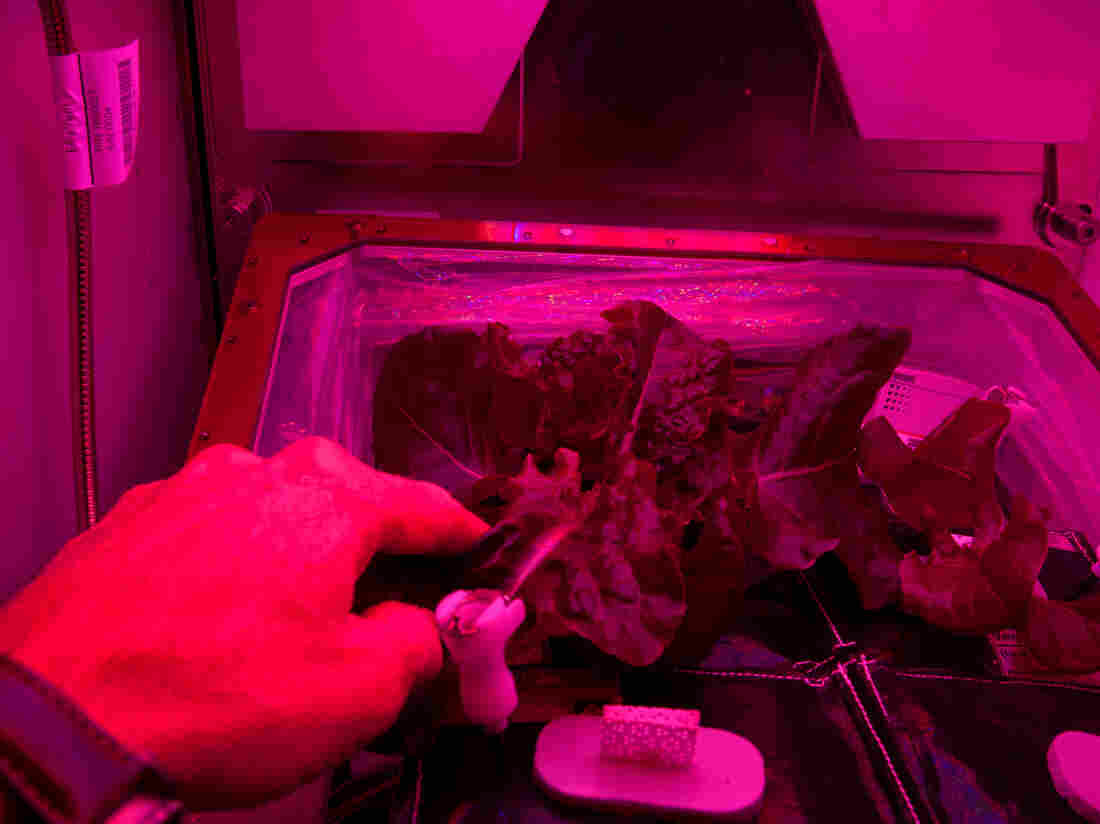 How does your garden grow? An astronaut checks on his lettuce plants aboard the International Space Station. Courtesy of NASA hide caption 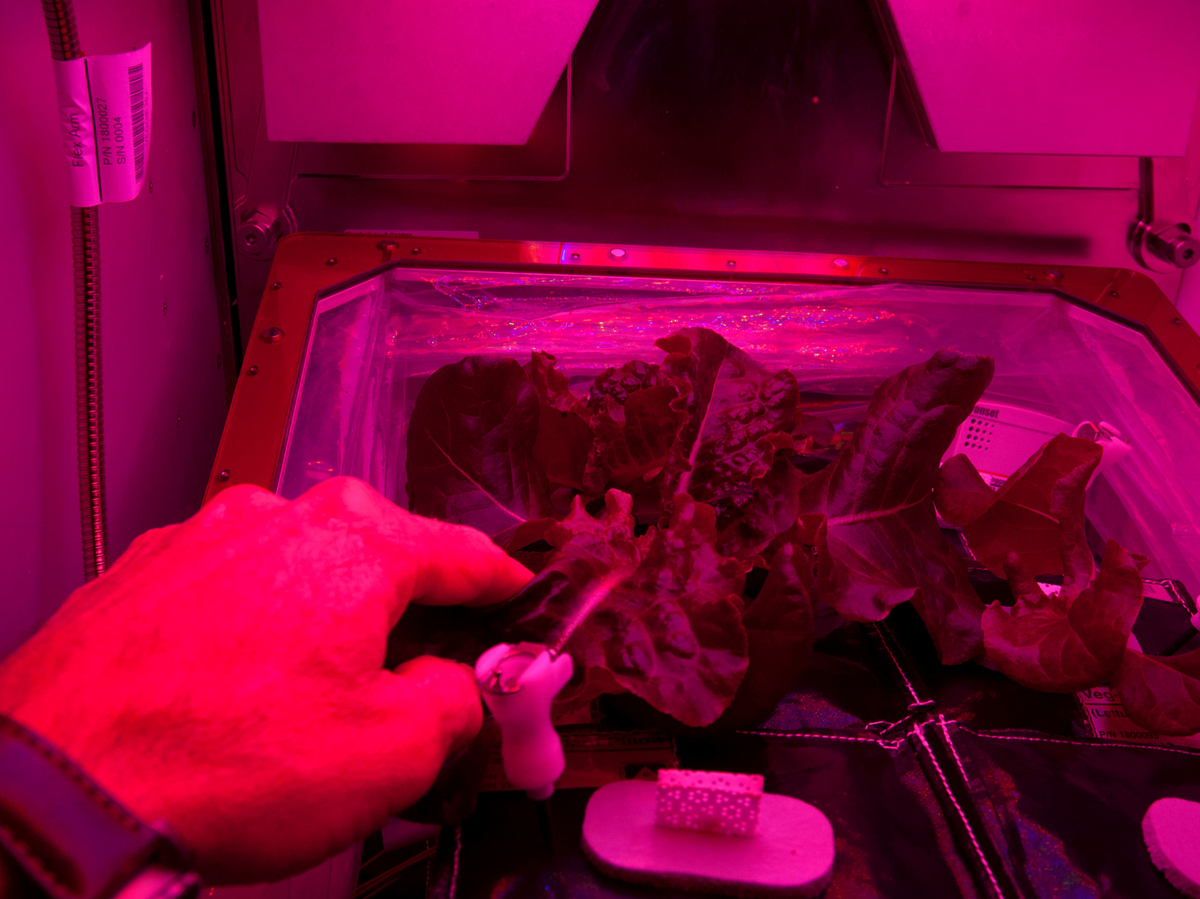 How does your garden grow? An astronaut checks on his lettuce plants aboard the International Space Station.

"Most plants are really just fine with red and blue lights ... for photosynthesis," Massa says. But the green lights are in there because otherwise the plants look pretty unappetizing to humans. "They look gray and purple in that kind of light," she says.

Astronaut Steve "Swanny" Swanson, who tends the plants in sunglasses, jokes that he's "getting a tan while growing lettuce."

The Veggie growing unit took years to develop. Because of the lack of gravity and other atmospheric challenges on the ISS, it has its own heat and air exchange systems.

"We call it a bellows," Massa says. There's a fan, drawing air from the station's internal atmosphere up and passing it out through a vent, sending oxygen out and carbon dioxide in — a bonus air cleaner for the ISS. The access side of Veggie has a "flexible accordion structure. It's attached up at the top with magnets, but you can take it down to photograph," she says, so NASA can keep tabs on the seedlings.

The bottom of the unit is made of screens covered in plant pillows — little sealed-off packets of seeds and fertilizer and a wicking material so the plants can take up water. That part has not worked as well as hoped, so some of the plants got a little stressed before they added extra water, Massa says.

So will the astronauts get to taste the greens Tuesday, when they're set to be harvested? Nope — at least not right away.

The scientists at NASA want to make sure the lettuce didn't pick up any pathogens first, so the specimens will be frozen and sent back to Earth for testing in the fall.

While they don't expect to find anything dangerous, there could be things in the air coming from the humans that the plants pick up. "We don't sterilize the crew," she says.

Growing lettuce in space is clearly a whole lot of work. Is it really necessary when prepared foods are so readily available? Yes, says Massa.

"It's expensive to send food, and food is heavy," with the packaging required, she says. And as there are longer missions planned for Mars and beyond in the future, the costs could be prohibitive.

But there are mental health benefits for the astronauts-turned-gardeners as well.

"The psychology of having something growing you can eat, it's very satisfying — most of the time, when you're not fighting off pests or something," Massa says.

No word yet on whether any extraterrestrial garden pests have shown up to spoil the party.