Accessibility links
Moms And Tykes Should Eat More Fish Low In Mercury, Says FDA : The Salt Many mothers-to-be and breastfeeding women were turned off of fish out of mercury concerns. A study finds many of these women now eat too little fish, so two agencies are recommending they eat more. 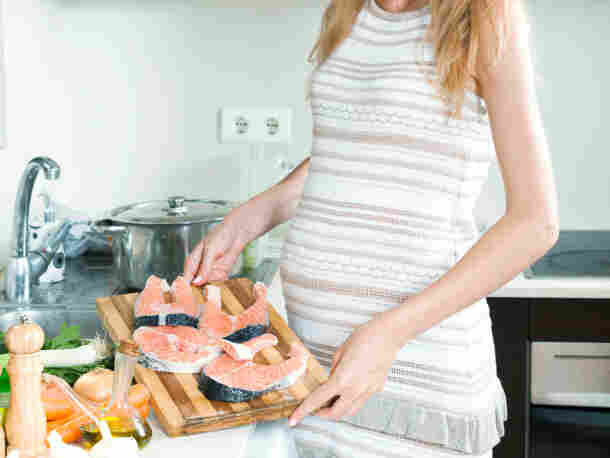 The FDA is recommending that pregnant women eat 8 to 12 ounces per week of fish such as salmon, canned light tuna, tilapia or cod. Iakov Filimonov/iStockphoto.com hide caption 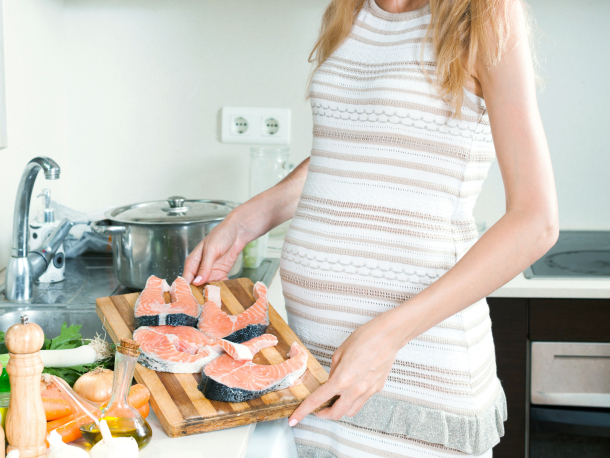 The FDA is recommending that pregnant women eat 8 to 12 ounces per week of fish such as salmon, canned light tuna, tilapia or cod.

Lots of us think of fish as brain food.

But many moms-to-be and breastfeeding women have been turned off of it, in part due to concerns about the potentially harmful effects of mercury in some types of fish.

An analysis by the Food and Drug Administration and Environmental Protection Agency released Tuesday found 1 in 5 pregnant women were not eating any fish for long periods of time during pregnancy. And 75 percent of women were eating fewer than 4 ounces per week.

"Emerging science now tells us that limiting or avoiding fish during pregnancy and early childhood can mean missing out on important nutrients that can have a positive impact on growth and development as well as on general health," said Stephen Ostroff, the FDA's acting chief scientist, in a statement.

In new draft guidance, the FDA is recommending that pregnant women eat 8 to 12 ounces per week — or 2 to 3 servings — of fish such as salmon, canned light tuna, tilapia and cod, which are all low in mercury. (For a full list of common varieties of fish and their mercury content, check out the FDA website.) Small kids should also get 2 to 3 servings a week, the agencies say.

The new advice, which replaces guidance from 2004, should clear up a long-standing conundrum for pregnant women who want to get the benefits of all the vitamins, minerals and omega-3 fatty acids found in many types of fish and shellfish.

Many women, it seems, have already gotten the message on mercury, as we reported in 2013. An EPA analysis found that the blood mercury levels in women of childbearing age had dropped 34 percent in the decade between 2000 and 2010.

According Laura Jana, a pediatrician in Omaha, Neb., who authored Heading Home with Your Newborn, you don't have to make it to a fresh fish market to meet the new guidelines and enjoy fish.

"Importantly, the new FDA draft advice makes it clear that canned light tuna is recommended as a safe source of fish for pregnant women," Jana tells The Salt. "In terms of convenience, this is great news ... it requires no advance planning and is unquestionably simple to prepare – from tuna sandwiches to Tuna Tetrazzini or simply putting it atop a salad." Jana adds that she keeps frozen tilapia filets stocked in her freezer for quick, healthy fish meals.