Accessibility links
It's Not Tennessee Whiskey If It's Aged In Kentucky, State Says : The Salt Tennessee recently began regulating whiskey carrying the state name, sparking a dispute between two liquor titans. A complaint over barrels stored in Kentucky added a new twist to the conflict. 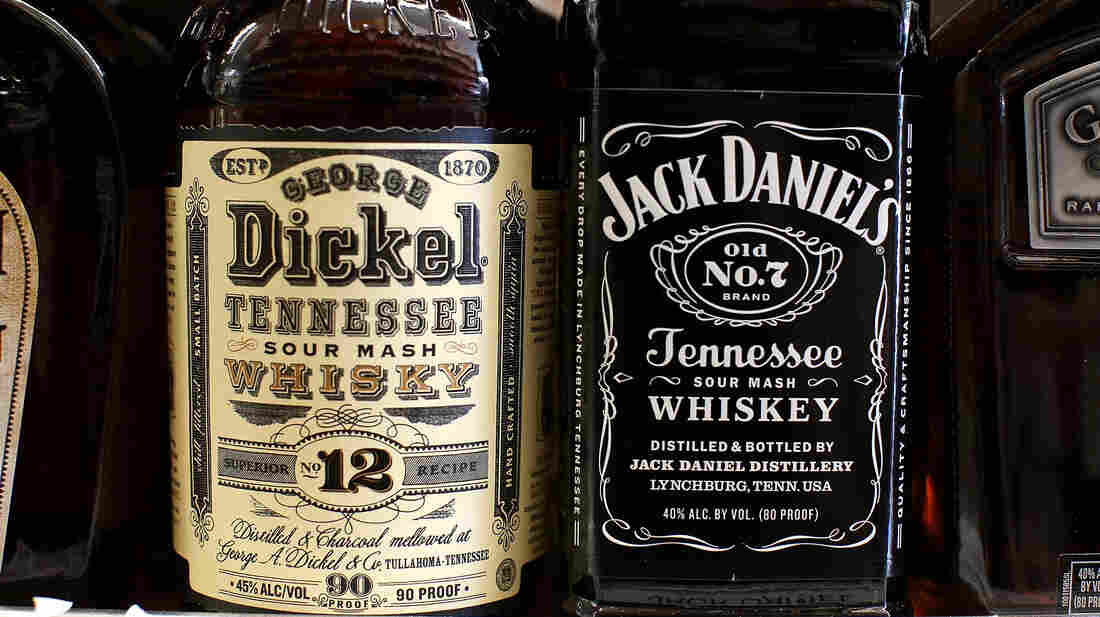 New regulations on what can be called "Tennessee whiskey" have sparked a fight between the makers of Jack Daniel's and George Dickel, two best-selling brands. Justin Sullivan/Getty Images hide caption 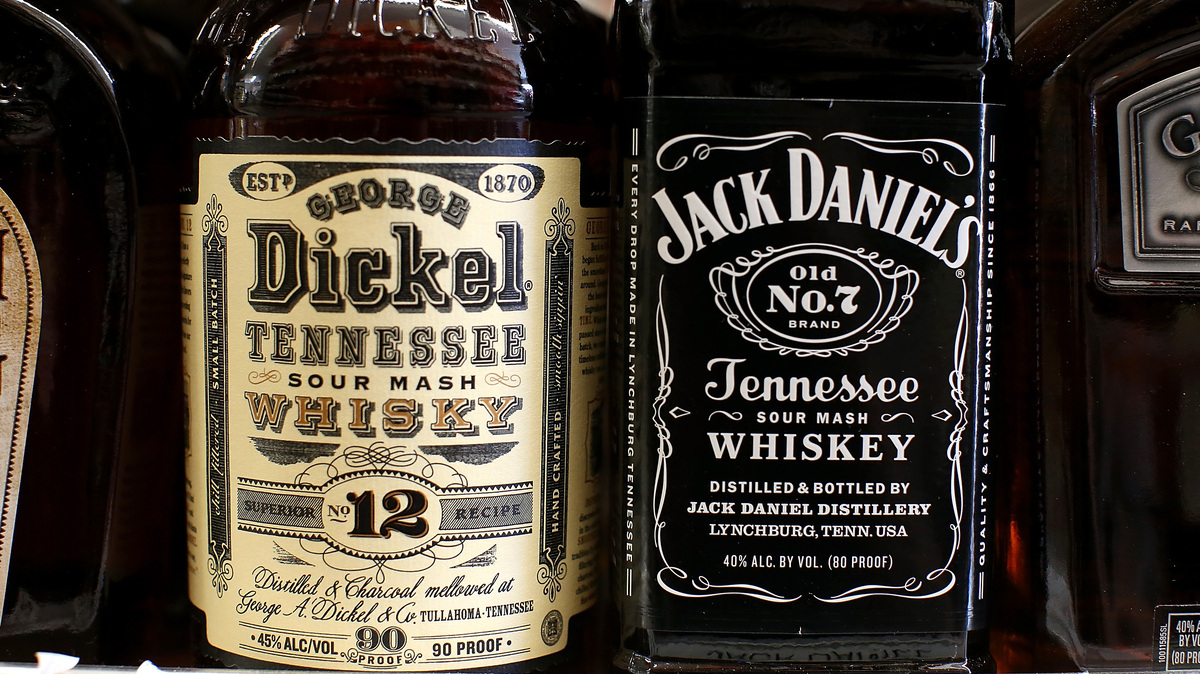 New regulations on what can be called "Tennessee whiskey" have sparked a fight between the makers of Jack Daniel's and George Dickel, two best-selling brands.

Well, actually, no. The latest chapter in the Tennessee whiskey wars revolves around the finer points of making whiskey in the Volunteer State — specifically, where you take the spirit to age.

The kerfuffle began in 2013, as NPR's Scott Simon explained earlier this spring, when the state Legislature decided to specify what exactly qualifies as Tennessee whiskey.

The state's new restrictions mostly echo the federal rules for bourbon, which has to be made from a mash that's at least 51 percent corn and aged in new charred oak barrels. The biggest difference is that Tennessee whiskey must be filtered through charcoal. (The rules do allow some flexibility: One small distillery is already exempted from the charcoal requirement.)

Do You Know Who Owns Your Favorite Liquor?

Jack Daniel's people lobbied heavily for the law, which they say helps guard against knockoff, lower-quality alcohol. Diageo, meanwhile, argued that it would make whiskey-makers dependent on the supply of new barrels, The Associated Press reports, and would hurt craft distillers who want to test out new recipes for the spirit.

Diageo launched a legislative effort this spring attempting to overturn the rules. In March, some lawmakers proposed simply tweaking the law to allow the use of reused barrels. Both repeal and reform failed to pass.

Fast-forward to June, when the state and Diageo resolved a second squabble — this time about where aging happens.

A 1937 law requires that all spirits made in Tennessee be aged in Tennessee, no more than a county away from the place they were manufactured.

State attorneys in Nashville complained that the George Dickel distillery had moved barrels of whiskey outside the state, into neighboring Kentucky, for aging — which would violate the 1937 law. Diageo promptly sued the state, alleging that the law was unconstitutional. They also pointed out that this was the first time the state had actually enforced the law — suspiciously soon after Dickel protested the state's newer rules.

On June 10, the state dropped the complaint against the distillery after Dickel clarified that the alcohol in question went to Kentucky not for aging but rather for blending: All George Dickel products are made and aged in Tennessee, the company's master distiller told the Nashville Post.

Regardless of what that booze was doing in Kentucky, does it really matter where exactly a barrel of liquor ages? According to Joe Barnes, founder of the Tennessee Whiskey Trail, yes.

Environmental conditions have a big impact on the wooden barrels, which provide the essence of aged whiskey, he says.

If you ask anyone in Tennessee, if they take their barrel down the street — much less across the state — they're going to get a different product, just by fluctuations in temperature and humidity.

"If you ask anyone in Tennessee, if they take their barrel down the street — much less across the state — they're going to get a different product, just by fluctuations in temperature and humidity," Barnes says. "Aging a product in Giles County is different from aging a product in Sevier County."

And if you assumed that a product aged in Kentucky wouldn't be that different from one aged in Tennessee, "that's really not the case," Barnes says.

There might also be some international intrigue at the heart of these disputes. Brown-Forman is American-owned, while Diageo is based in the U.K.

Both companies produce a world-famous best-selling whiskey. For Brown-Forman, it's Tennessee whiskey. For Diageo, it's Johnnie Walker scotch.

Some people — including a spokesman for Brown-Forman — suggest that the conflict over regulating Tennessee whiskey is part of a larger Jack-vs.-Johnnie competition for global market share. If the new laws strengthen Jack Daniel's position in the marketplace, that might hurt Diageo's scotch sales.

Trans-Atlantic conflict aside, now that the state has dropped the case against George Dickel, the whiskey wars look like they'll go quiet for a while. But stay tuned: The AP reports that this summer, state legislators are expected to revisit the question of what, exactly, makes a Tennessee whiskey.