Accessibility links
From Organic Pioneers, Son Inherits Passion, Just Not For Farming : The Salt Arlo Crawford's parents started the kind of small, organic farm that's now trendy, back before it was trendy. But it was his parents' dream, not his. He's now written a book about the experience. 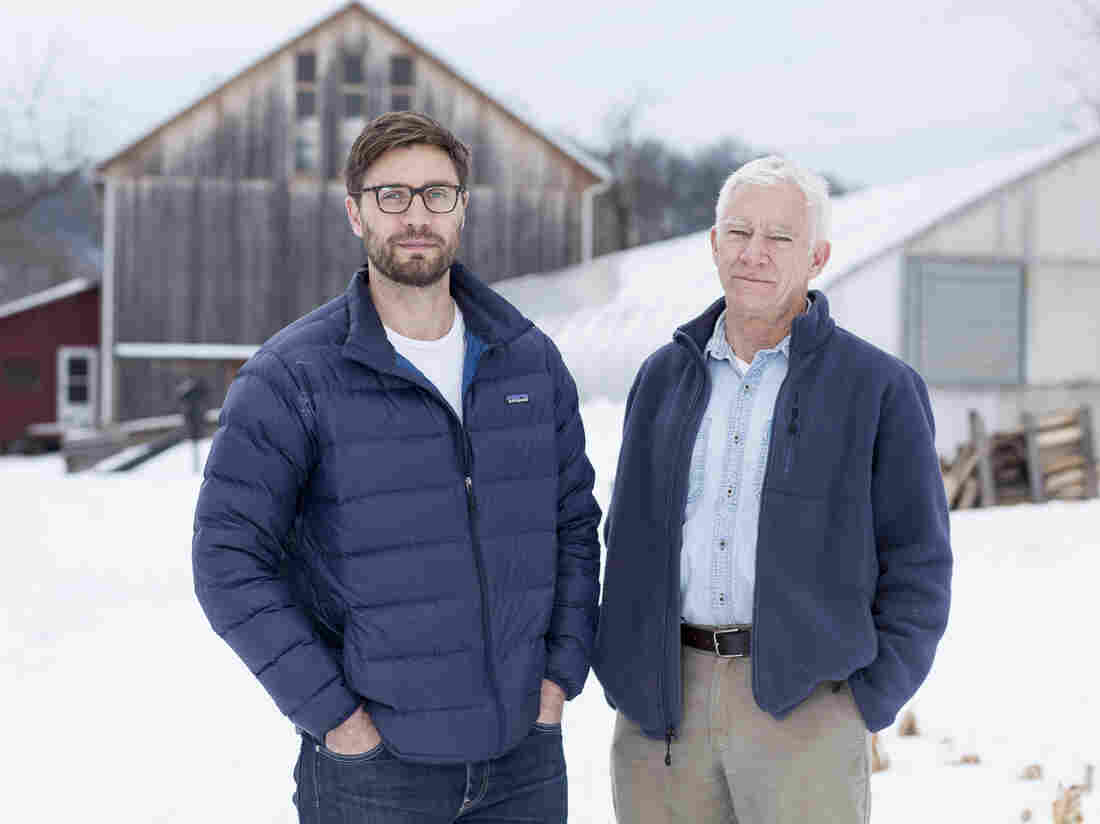 Writer Arlo Crawford (left) with his father, Jim Crawford, an elder statesman of the organic farming movement who dropped out of law school in 1972 to grow vegetables. Melanie McLean/Courtesy of Henry Holt and Co. hide caption 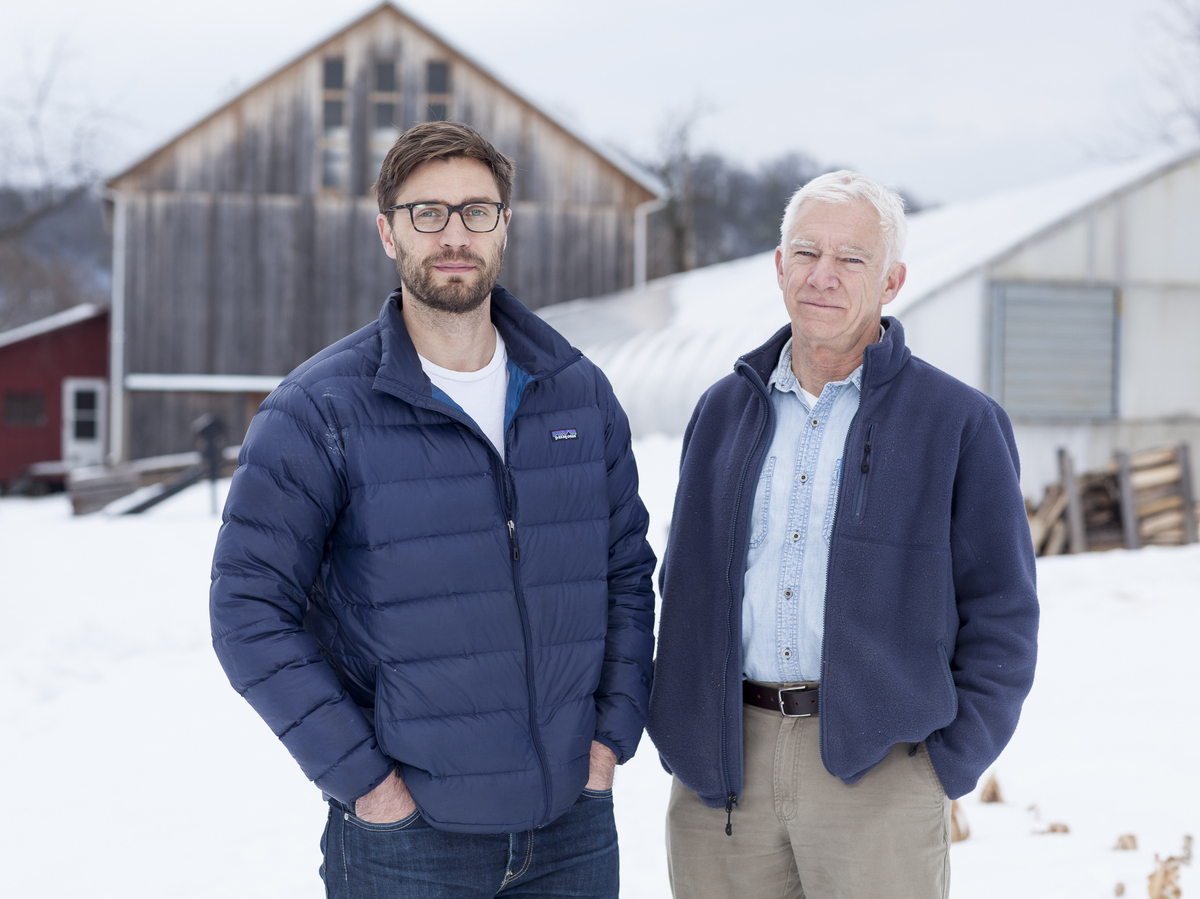 Writer Arlo Crawford (left) with his father, Jim Crawford, an elder statesman of the organic farming movement who dropped out of law school in 1972 to grow vegetables.

If you're a listener, you may recognize the name New Morning Farm. It's a 95-acre organic vegetable farm in south-central Pennsylvania, and it has appeared in our stories about young farmers, urban farmers markets, new food safety regulations and the popularity of rhubarb.

The voice of the farm is usually Jim Crawford, its founder, now an elder statesman of the organic farming movement. He's a child of the suburbs who dropped out of law school in 1972 because he was smitten by the idea of making a living doing what he'd always loved: growing vegetables. 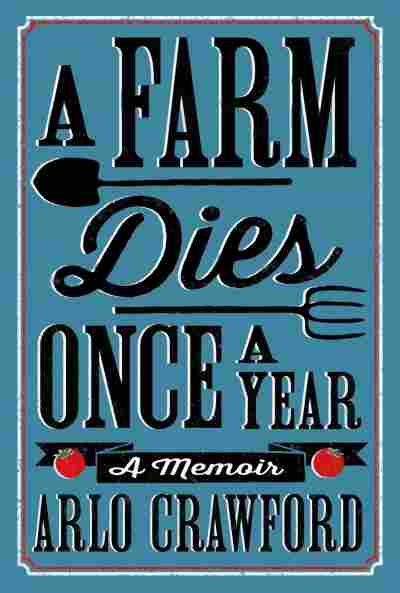 A Farm Dies Once a Year

Title
A Farm Dies Once a Year
Author
Arlo Crawford

A few years later, Moie Kimball joined him, taking a train from New Hampshire on the advice of a mutual friend for what amounted to a blind date. Two years later they were married, and eventually, they had two children together.

The older of those children, Arlo, has now written a book, A Farm Dies Once A Year, that looks at New Morning Farm from a different angle. It's the perspective of a son who saw farming as his parents' choice and passion, but not his own.

Crawford's story caught my attention because it describes a style of farming — rooted in youthful, naive enthusiasm, rather than family legacy — that has captivated a new generation in recent years.

Thousands of young people, inspired by ideals of environmentalism and the satisfaction of growing healthful food, are following in the footsteps of Arlo Crawford's father. They are interning on organic farms or trying to start their own, learning the mysteries of soil fertility and weed control and ways to reach new customers. And Arlo Crawford's book about his father's life on the farm is also — perhaps unintentionally — a kind of meditation on what may still lie ahead of this new "Generation Organic."

I wondered what Arlo Crawford thinks of this wave of enthusiasm for the kind of farm that he grew up on, and eventually left behind. So I called him up.

Crawford chuckles. "I celebrate it — because I look at them and think, 'You have no idea,' " he says. "You're watching somebody take off on a kind of crazy expedition to a place they aren't sure of yet."

They could probably learn a lot from his father, who "has always had this really pragmatic view of what it takes," he says. In the book, Arlo Crawford portrays his father as single-minded — almost neurotic — in his focus on the day-to-day details and profitability of his business.

That focus on profits has been a key to the farm's survival and success, Crawford says, but "there's also something that was lost. In the 1980s, things might have been really difficult, but it was more fun! There was more joy involved" than in later years when the farm was more successful.

With growth, "you end up with new obligations," Crawford says. "And it's interesting to watch how the farm has followed that track of responsibility. The business has aged in the same way that a human ages." 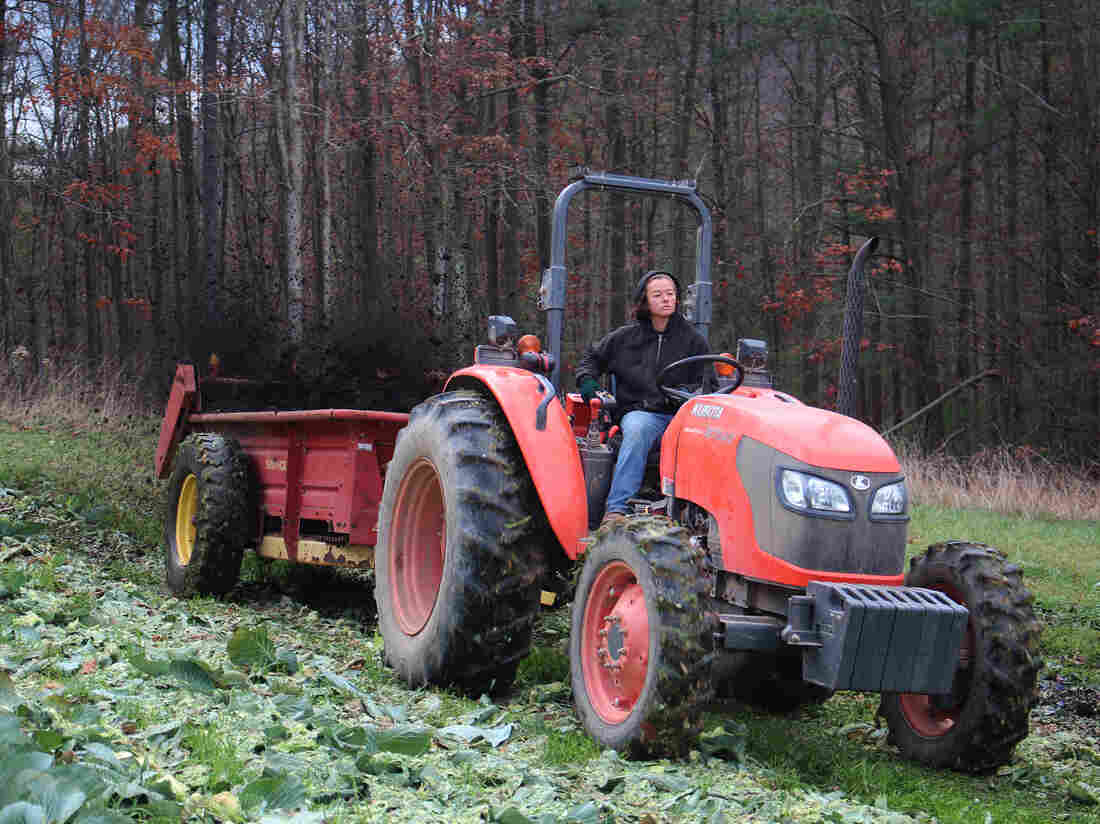 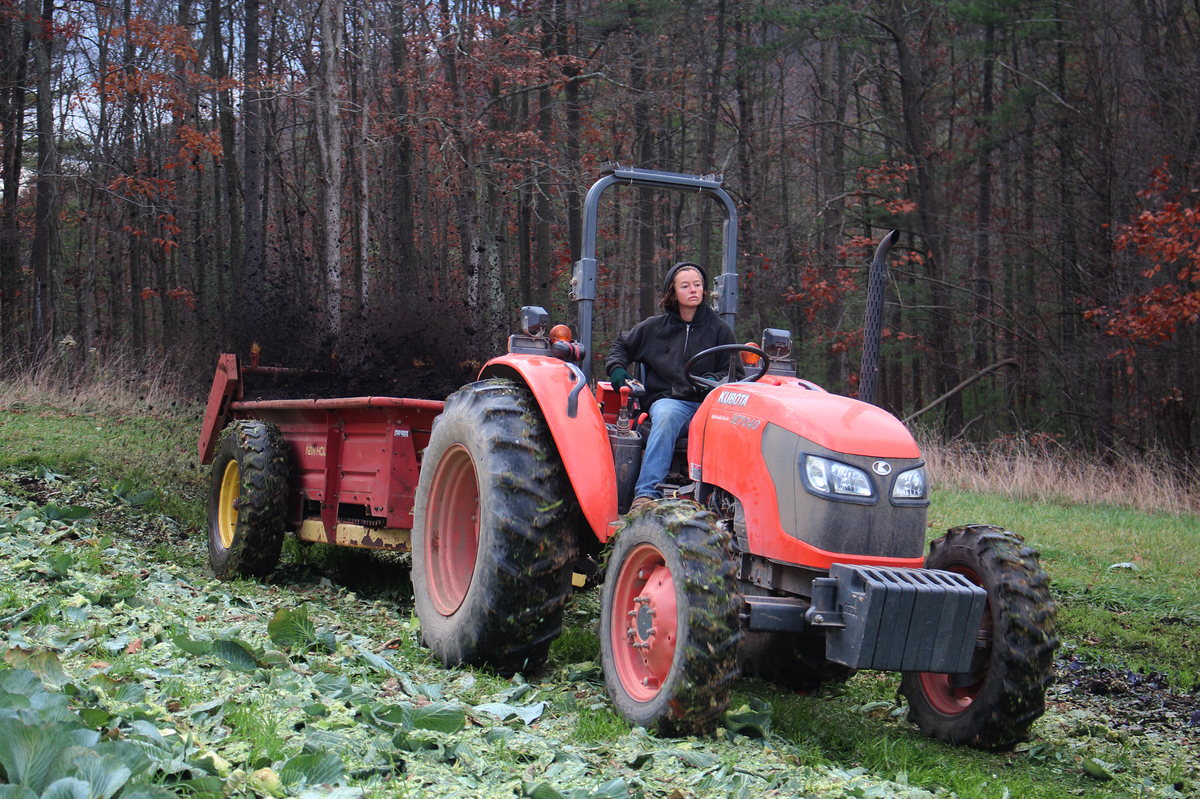 The new wave of interest in local food and organic farming has certainly hit New Morning Farm. About 10 years ago, Crawford says, "there was this big crisis" because the farm couldn't find enough interns to help out in the summer. Then, suddenly, there was a flood of overqualified applicants.

"[Getting an internship at New Morning] was like getting into Harvard or something," Crawford recalls. "And the crew that's on the farm today, they're amazing farmers. They run the farm so efficiently, and it's a great thing."

Yet Crawford, who grew up there, moved on (he now lives in San Francisco). So have nearly all the people he knows who grew up in similar situations, as children of organic pioneers or back-to-the-landers. 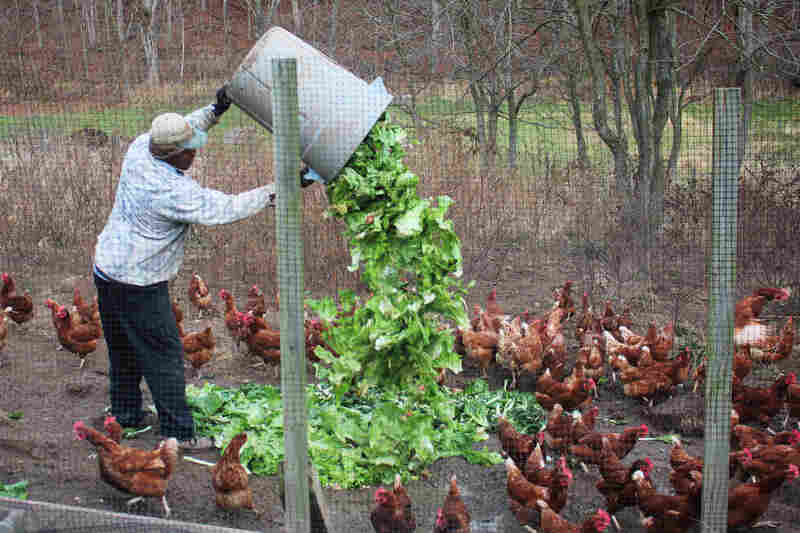 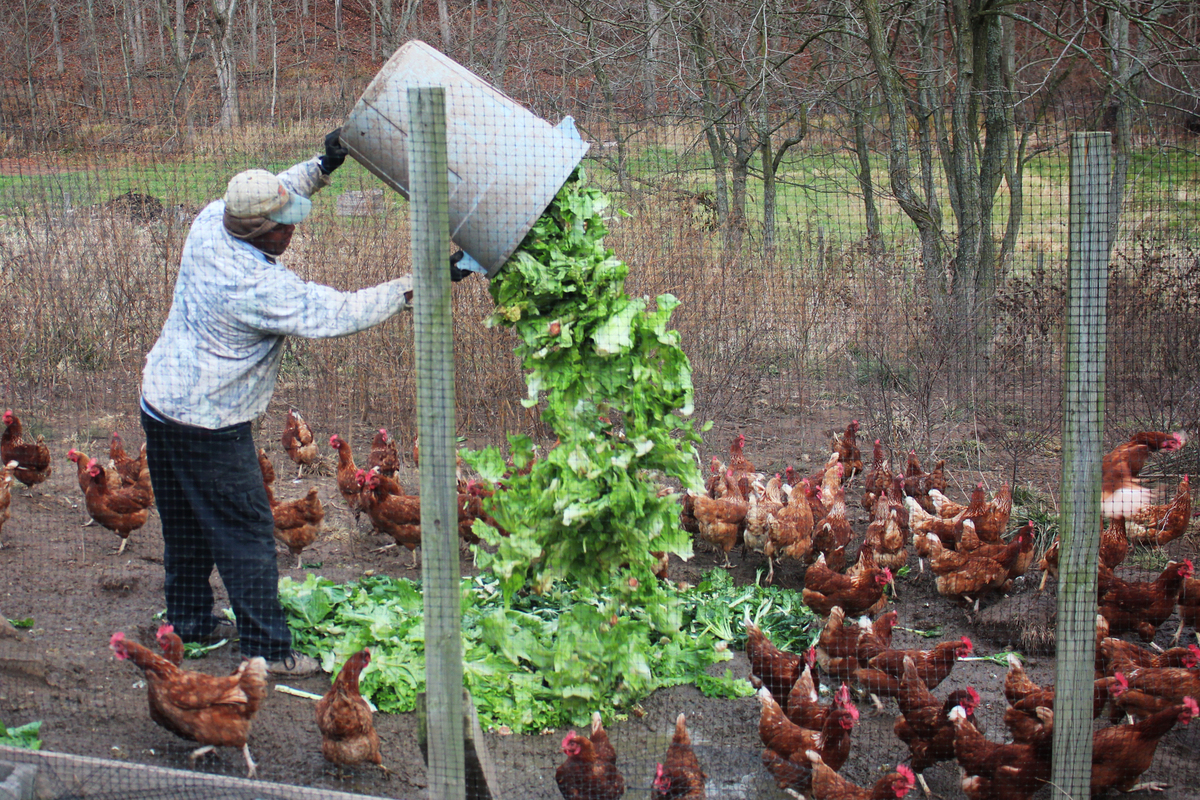 This actually makes sense, he says. New Morning Farm is a "passion project," not something to be handed down from parents to children, the way so many traditional farms are. Quite the opposite: "Both of my parents were really defying their parents' expectations when they decided to do this."

The legacy of his parents, in fact, is not the land, but the impulse to try new things. "What my parents passed on to me is that it's possible to go out and take huge risks," Crawford says. Right now, he's trying to forge a life as a writer.

So the new style of farming may be one in which farms don't stay in families. They're adopted by whoever has the passion to keep them going.

Read an excerpt of A Farm Dies Once a Year