Accessibility links
Science Of Stink: Blame Sulfur Compounds For Your Garlic Breath : The Salt A sulfur compound in garlic can linger in the body for up to two days, stinking up your breath, sweat and pee. Milk, parsley or citrus might help break it down more quickly or mask the stench.

Science Of Stink: Blame Sulfur Compounds For Your Garlic Breath

Science Of Stink: Blame Sulfur Compounds For Your Garlic Breath

Garlic is delicious. But if you consume enough of it, its stench can repel not only vampires but any person within a 5-foot radius.

What's behind garlic breath that makes it so offensive? In a video, the folks at the American Chemical Society and the chemistry blog Compound Interest lay out the chemicals responsible for the odor.

Chopping or crushing garlic releases the compound allicin, which then breaks down into four other smelly compounds. The most mischievous of them is allyl methyl sulfide, which can linger in your body for a long time. It not only causes your breath to go rank, but as it seeps into your bloodstream, it also gets into your sweat and pee.

It can be incredibly difficult to get rid of the stench once you've ingested this chemical. "Humans and animals are exquisitely sensitive to the most tiny amounts of sulfur compounds," says Eric Block, a professor of chemistry at the State University of New York in Albany, and the author of Garlic and Other Alliums. 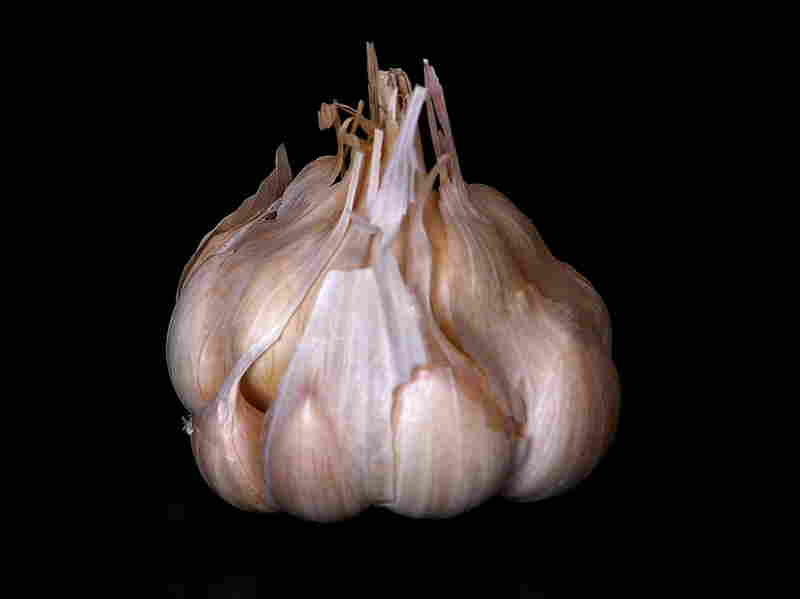 It makes our mouth water, but it makes our breath stink. Flickr hide caption

Once you metabolize these compounds, the smell goes away, Block tells The Salt. But that can take a while — up to two days, though it varies in each person.

Some people can break it down quickly, but "I'm not one of those," he says. "I'm a garlic lover, and my wife — who has an excellent sense of smell — says even 48 hours after eating a garlic meal, she can smell it on my skin."

Some research suggests that the fat in milk may help us break down the allyl methyl sulfide more quickly. The ACS video also suggests parsley.

But these sorts of remedies may be iffy, Block says; instead he recommends masking garlic with other strong smells.

Citrus can help, says Bhimu Patil, a horticulturist at Texas A&M University, but that's based on anecdotal evidence.

Garlic — especially when it's eaten raw — is good for you, Patil says. "Maybe eat it at night," he says. "That way you can also lead a social life."

But if you're gorging on garlic because you think it'll quash your cold or reduce your risk of getting cancer, don't get your hopes up too much.

Some preliminary studies show that garlic's antimicrobial properties may benefit our health, Patil says. And epidemiological studies that look at countries where people consume a lot of garlic suggest that it may reduce the risk of developing cancer.

But, he says, "We need to do more analysis. We need to really understand the role of these compounds in garlic — both good and bad."

And since garlic is so pungent, most of us probably don't eat enough to actually reap any major health benefits, Block says.

It does stop the spread of disease in at least one way, though, Block says. "As I once heard a comedian say, by eating garlic you'll have such bad breath that no one wants to come near you."