Accessibility links
Kandinsky On A Plate: Art-Inspired Salad Just Tastes Better : The Salt Would a salad arranged like an abstract painting be more enjoyable and valuable to diners than a typical salad presentation? Psychologists tried to find out. 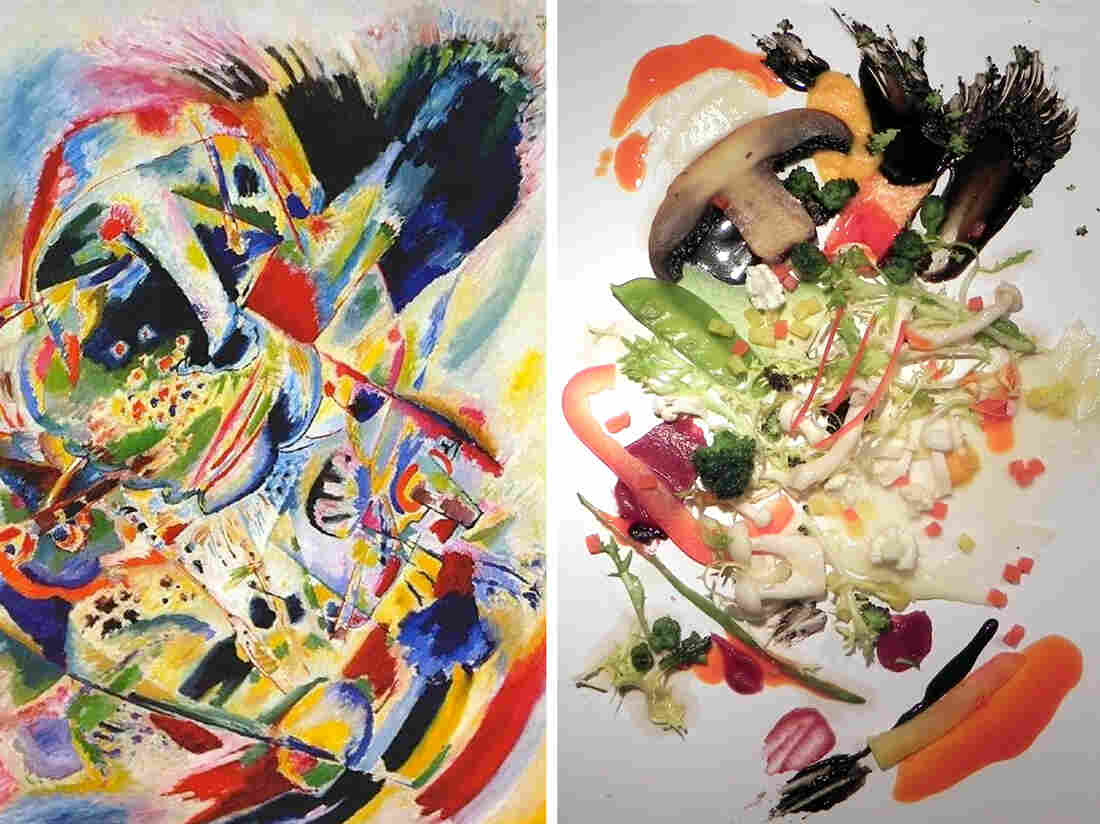 Kandinsky's Painting No. 201, on the left, was the inspiration for the salad on the right, which was used to test diners' appreciation of the dish. Museum of Modern Art; Crossmodal Research Laboratory hide caption 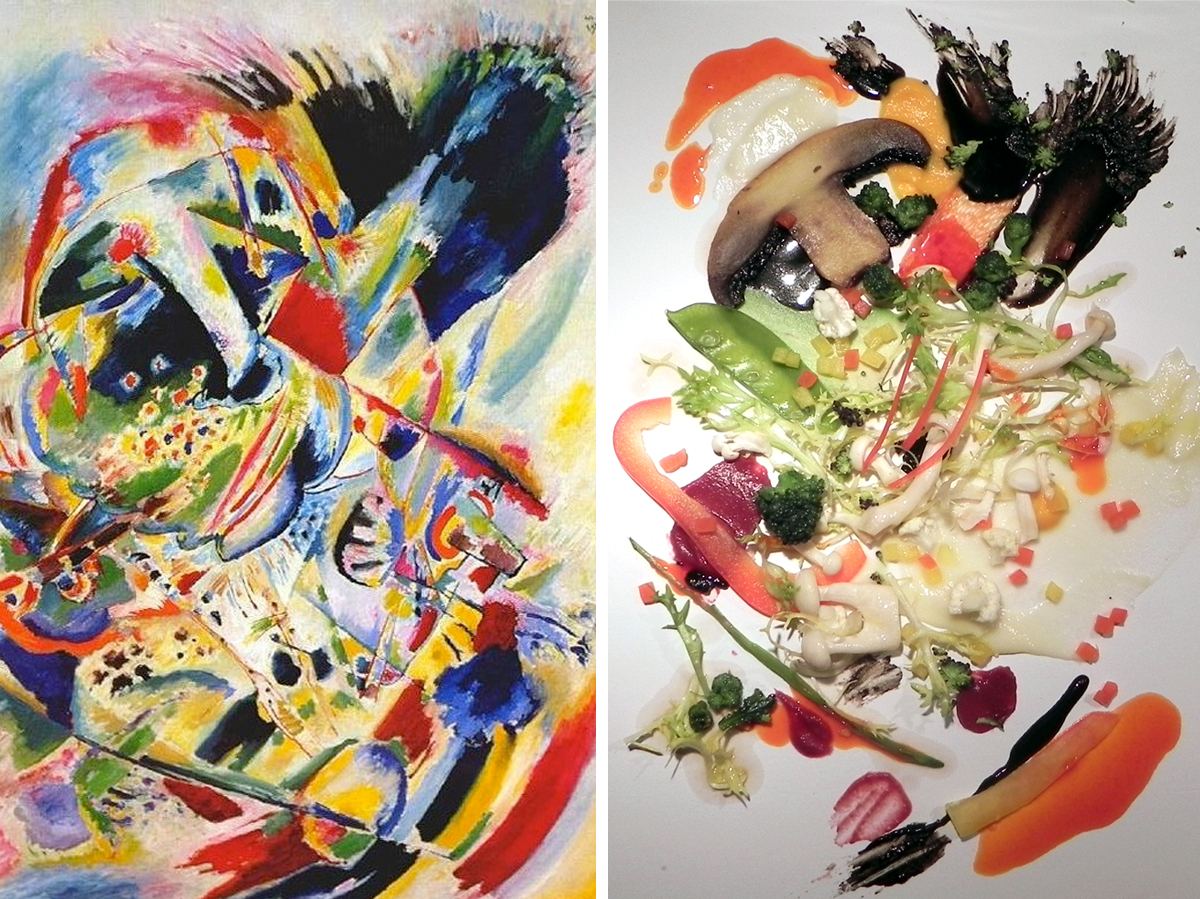 Kandinsky's Painting No. 201, on the left, was the inspiration for the salad on the right, which was used to test diners' appreciation of the dish.

We eat first with our eyes. When strawberries are perfectly red, they seem to taste sweeter. When chicken is painted blue, it's disturbing. The ancient Romans understood that, and certainly today's top chefs exploit it when they plate their food.

Some plating practices are ethnic, others trendy. A Japanese dish would not appeal if a large chunk of meat was set on top of a heap of starch in the center of the plate, as is common practice with French food. And then there are chef-y flourishes like towering vertical stacks, swirly sauces and the fried sprigs of rosemary sticking out of a sandwich.

So how far should chefs and stylists really go to win over diners? Perhaps even further.

Recently, some experimental psychologists at the University of Oxford decided to see what impact a plate of salad arranged like an abstract painting would have on 60 diners' perception of the food.

One group of diners was offered a salad arranged like Wassily Kandinsky's Painting No. 201. Another group was given a salad featuring broccoli sprouts, Portobello mushroom slices and snow peas lined up in neat rows. The last group was offered a typical pile of salad arranged in the middle of a plate. Each salad had identical ingredients, dressing and condiments.

The Kandinsky salad was rated the best — by an 18 percent margin over the other two presentations. Most importantly for restaurateurs, diners were willing to pay twice as much, both before and after eating it. (See the breakdowns in ratings in this bar graph.) 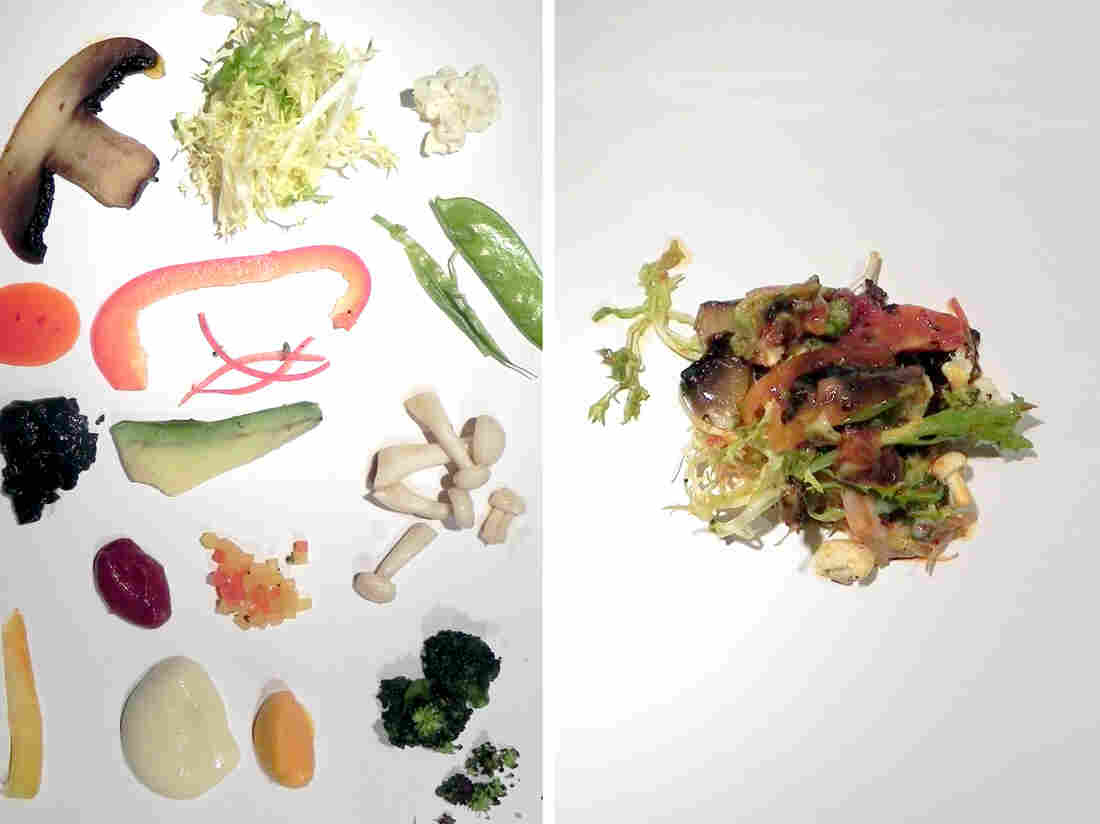 The components of the salad used in the Oxford study (left), and the pile of salad given to the third group of participants. Crossmodal Research Laboratory hide caption 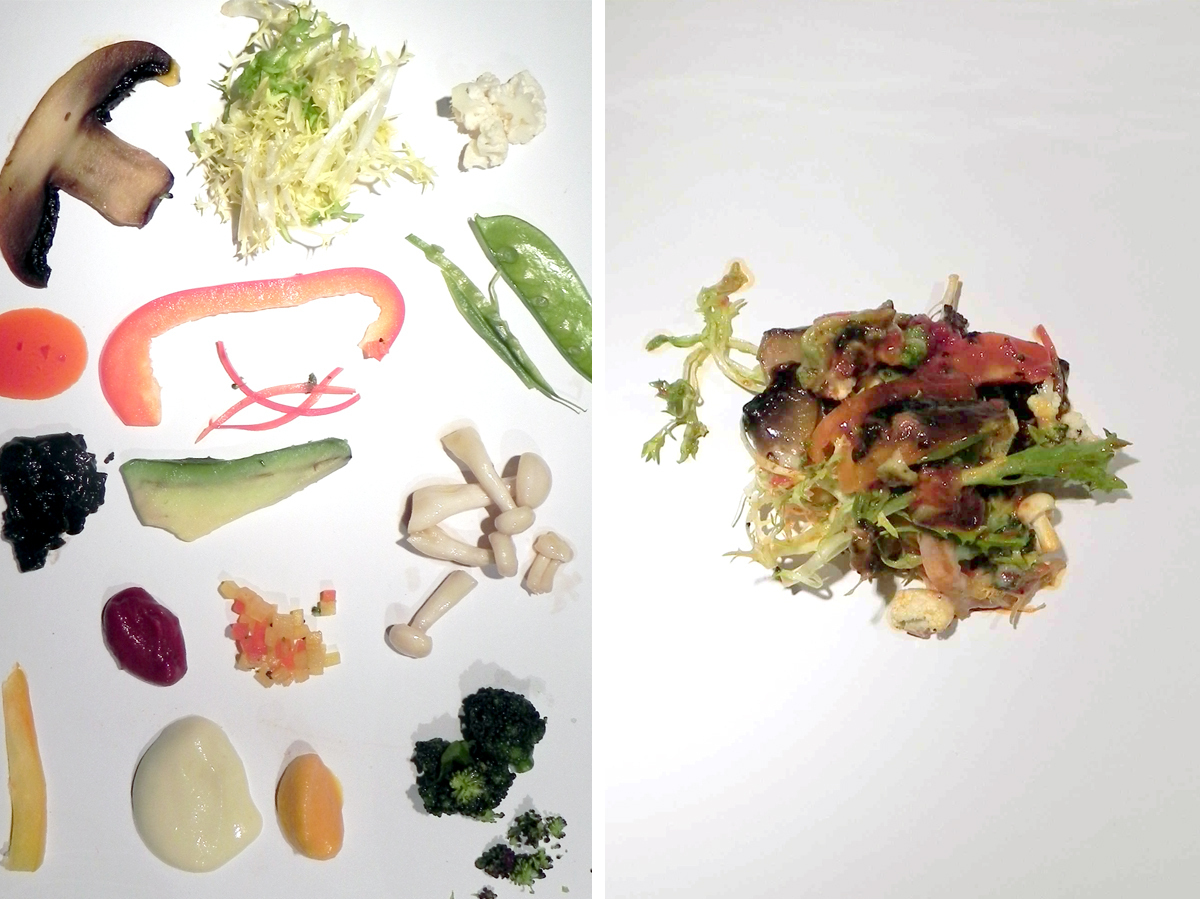 The components of the salad used in the Oxford study (left), and the pile of salad given to the third group of participants.

Charles Michel, who is the chef in residence at the Oxford Crossmodal Research Lab and the lead author of the study, tells The Salt he chose Kandinsky's work for "the specific association of colors and movement." His chef's mind saw a salad, particularly the mushroom shape in the top left corner, and the experiment took shape.

"It's not so much about food copying a work of art in particular, but rather using artistic inspiration, or simply having an artistic sensitivity when plating food — as most chefs actually do," he says.

The diners were not told that the Kandinsky-esque salad was designed to look like a painting. Still, the study shows that "diners intuitively attribute an artistic value to the food, find it more complex and like it more" when presented this way, Michel and his co-authors write in the paper.

Why the diners thought the painting-like plates were more appealing is trickier to parse. They may have identified appealing patterns of color and shape, or the artistic plate may have "implicitly suggested a connotation of higher value (or effort) through the visual display, value that might have helped to deliver a more pleasurable eating experience," the study says.

The "Taste of Kandinsky" study was published this month in the journal Flavour.

"I hope certain cooks can get inspired by this, and openly connect culinary creation to a more artistic act," Michel says.

So all you wanna-be chefs and food stylists, try imitating some art for your next food photo shoot. Tweet us your pictures to @NPRFood. Don't forget to tell us what painting you're modeling and use the hashtag #NPRfineartfood. We'll post a roundup of the best next week.