Accessibility links
'Artisanal' Ramen? Instant Noodles Get A Healthy Dose Of Hacking : The Salt Bake them, grill them, even smother them in chocolate. College students and food writers who count instant ramen noodles as a staple are devising all sorts of ways to make them healthier and tastier. 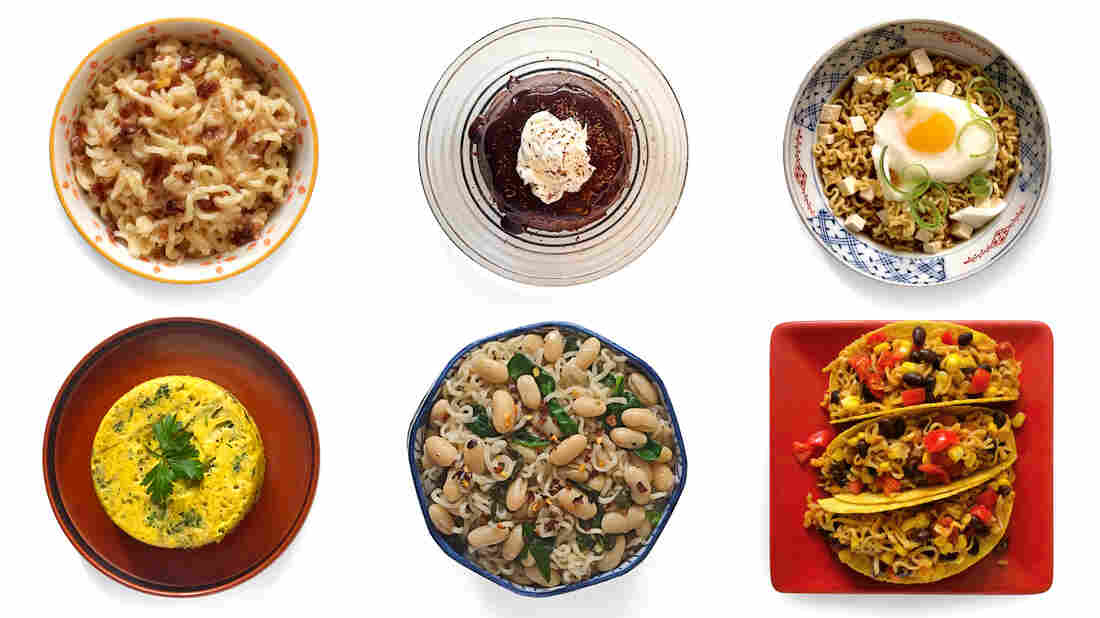 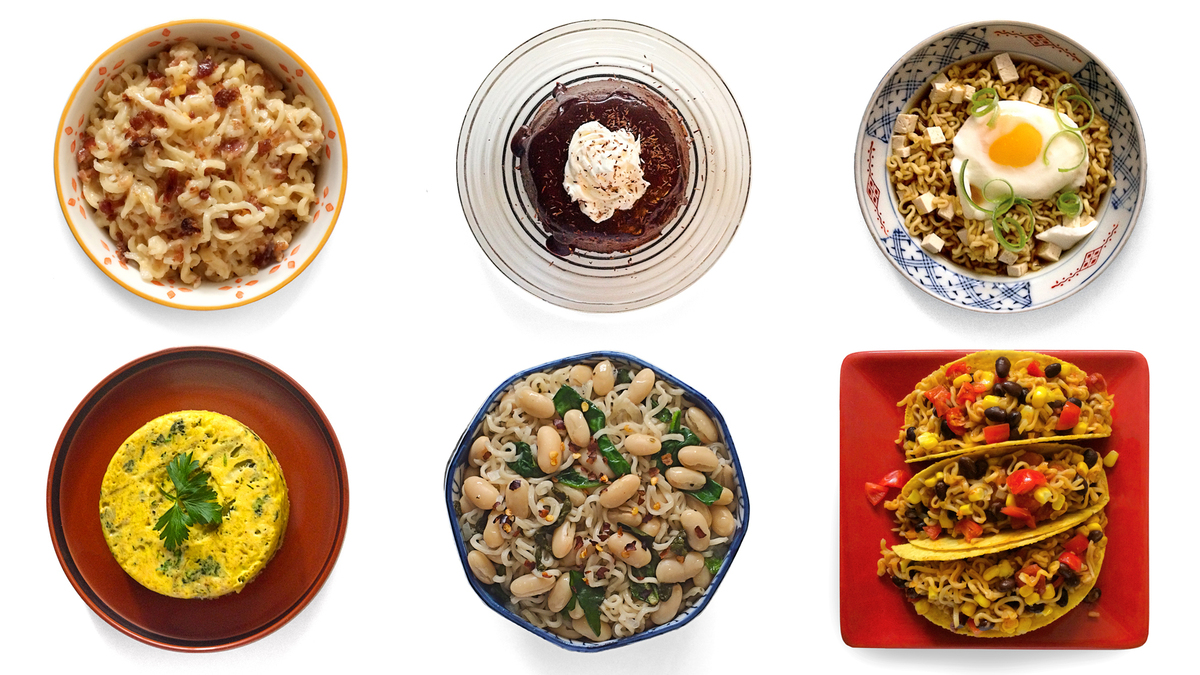 If there's one thing college students know well, it's a belly full of instant ramen.

"Ramen always has been and always will be a college staple," says Rick Brandt, a recent University of Iowa graduate.

And it's not just college students who turn to the noodles in lean moments: When your food budget is reduced to quarters dug out of the couch, or when hunger pangs strike at ungodly hours, ramen noodles may come to the rescue. 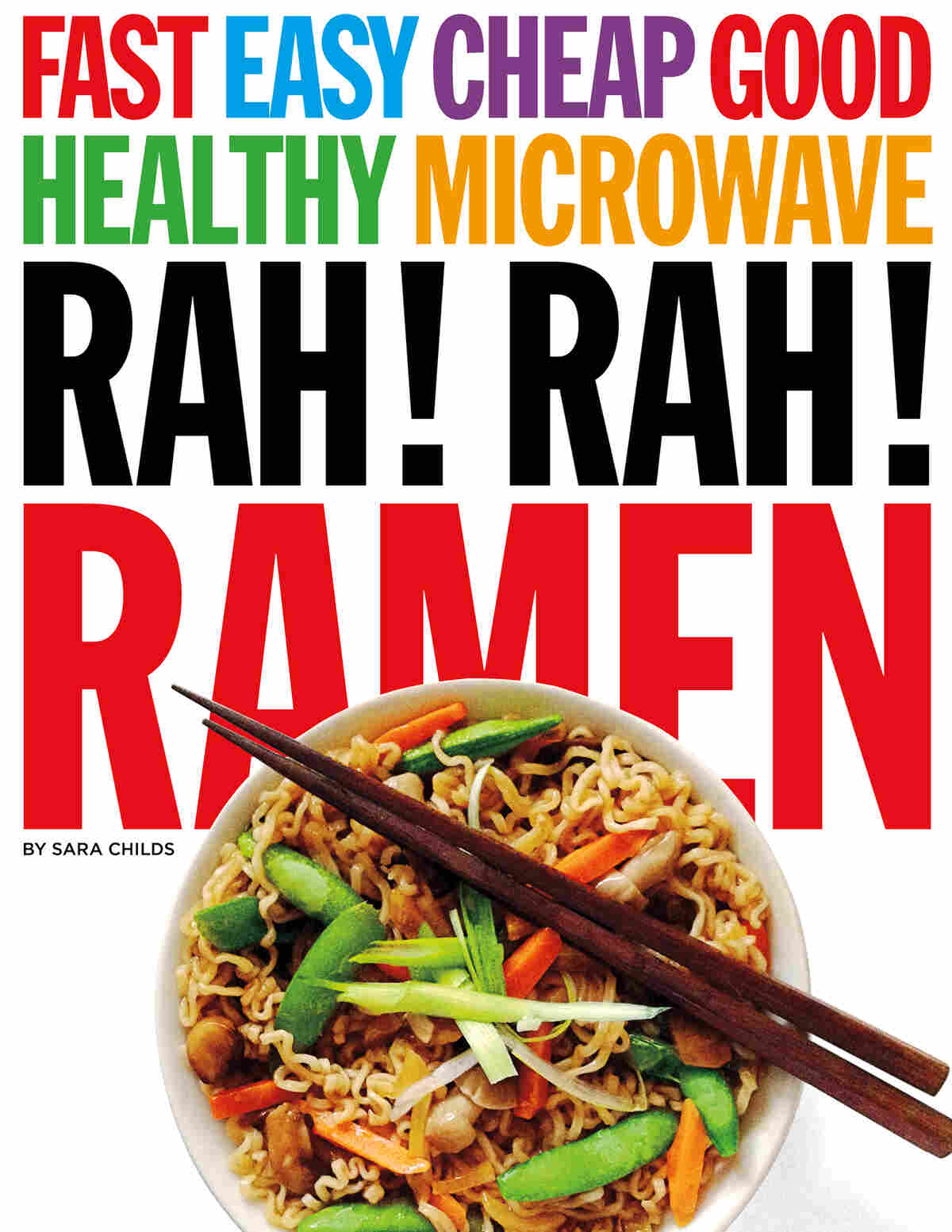 But while you can get a quick fix of salt and carbs by tossing the block of dried noodles and seasoning into the microwave, you won't be getting much in the way of nutrition.

And that got Brandt starving for something that's just as convenient, but a lot healthier. He created the recipe blog College Fed (recently renamed Dumbed Down Food) to test and share ways to eat healthier in the dorm.

Several blogs like his are now offering students — and anyone else who counts ramen as a staple — all sorts of ways to hack the ripply noodle. The simpler recipes suggest throwing in vegetables and protein to add nutritional value, much like Brandt's ramen stir-fry recipe, which he says has been one of his more popular posts.

The most intriguing hacks are those that take the instant noodle out of its conventional setting. For instance, ditch the bowl and make ramen a substitute for bread in this latest craze: ramen noodle grilled cheese sandwich.

Or, perhaps you prefer to bake it into a ramen frittata, packed with shredded cheese, bacon and tomatoes. Better yet, just smother it in chocolate and ice cream for a one-of-a-kind dessert.

"The possibilities are endless," says a graphic designer and experimental chef who uses the pen name Sara Childs. Her new book Rah! Rah! Ramen features more than 50 speedy recipes for preparing instant noodles in the microwave. The whole idea, she says, was inspired her friend's college-bound daughter, who mentioned that she had four years of ramen to look forward to.

Childs' recipes include Macmen N' Cheese, which calls for hot sauce, cheddar cheese and bacon. Or, if you're looking for some added fiber, why not try her spinach cannellini ramen soup?

In a mood for something sweet? Childs assures me the lemon curd ramen is a must-try.

But these recipes are only the tip of the iceberg. She says she could come up with at least 50 more if she had the time and space in her book. After all, basic ramen (without the seasoning packet) is just wheat flour and palm oil.

"If you look at it as just a basic ingredient, you can keep adding with your imagination and take off on it," she says.

Ramen is what food historians call a platform food, says Barak Kushner, a Japanese history professor at University of Cambridge. "It's ... like a sandwich, on which you can put any flavors, so it adapts well to local tastes," he tells The Salt.

Plus, at around 30 cents a pack, what cash-strapped adult can resist?

But as the anthropologists behind the book The Noodle Narratives will tell you, the "humble commodity" means more to Americans than the price suggests.

"Instant noodles, it would seem, may serve as a blank slate for the inscription of small personal stories," they write. Indeed, when NPR asked listeners to share their ramen noodle stories with us in 2009, we were served a "big, steaming bowl of nostalgia."

Memories flooded in of how a bad case of gas led to the creation of Stoodles — ramen mixed with beef stew, how a hungry flight attendant discovered the magic of ramen tuna casseroles, and how ramen burritos became a regular lunch item.

These creations may be no match for chef David Chang's bowls of sybaritic ramen, but they can be considered artisanal in their own respects.

"When people eat a lot [of the same thing], they're always looking for ways to make it better," blogger Rick Brandt says. "And you know what? To them, they've just made something out of this world."