Accessibility links
'Frobot' Creator: Taking Frozen Yogurt Where It's Never Been Before : The Salt Is frozen yogurt a weak link in our quest for sustenance and gastronomic pleasure? A Washington, D.C., startup thinks so, and has just launched a frozen yogurt vending machine to make fro-yo easier.

'Frobot' Creator: Taking Frozen Yogurt Where It's Never Been Before

'Frobot' Creator: Taking Frozen Yogurt Where It's Never Been Before 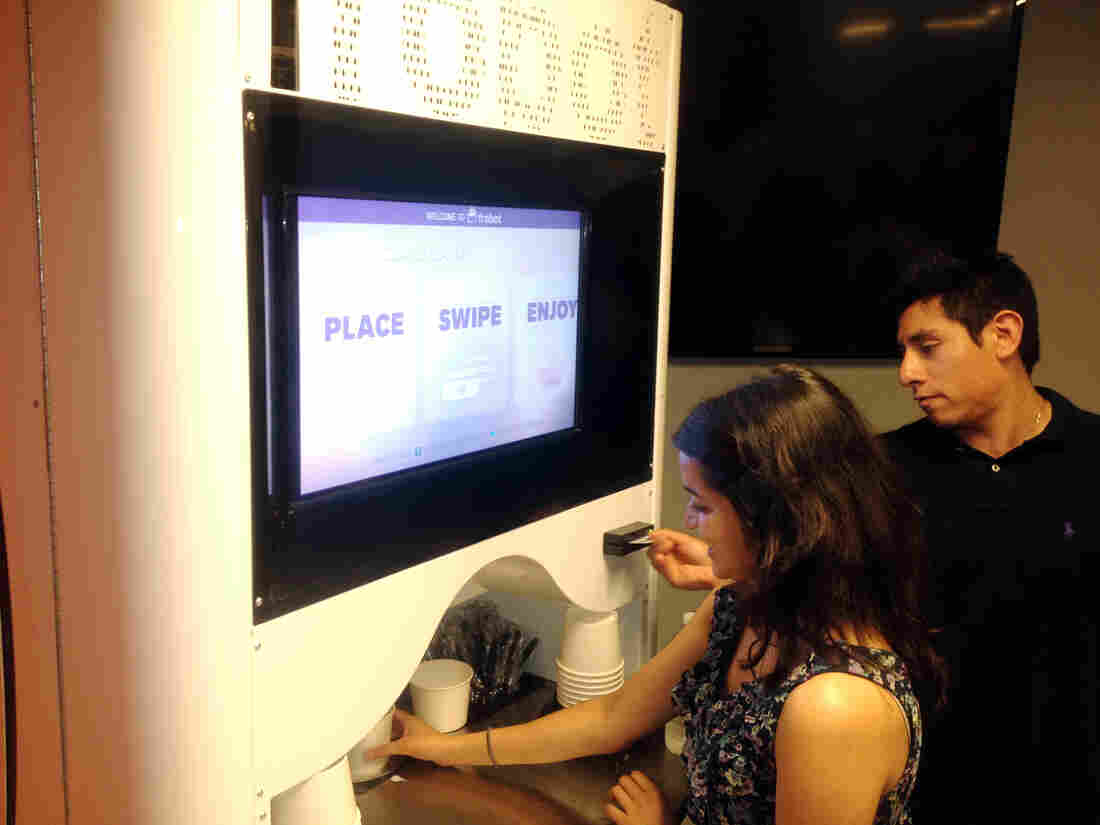 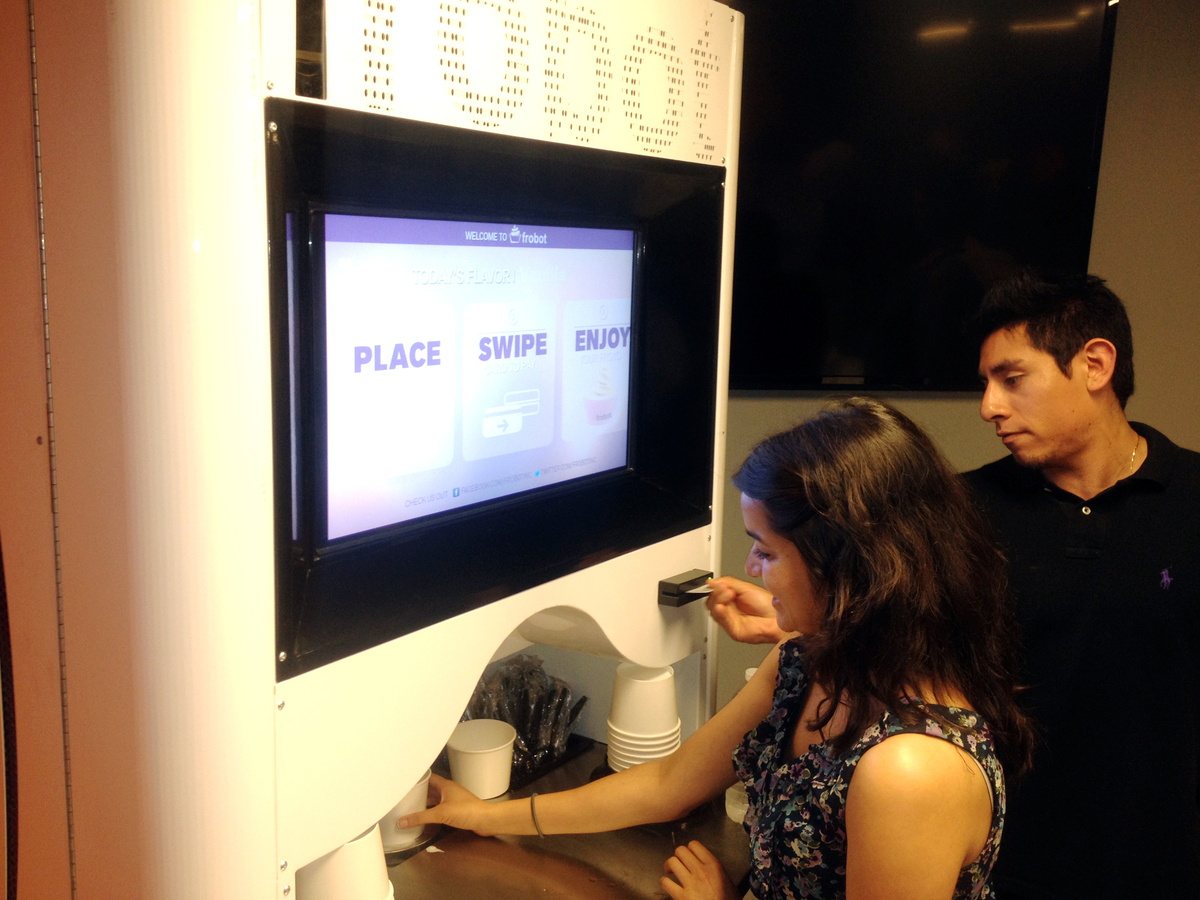 There has been a lot of talk of disrupting the food system lately. Bill Gates, among others, has said the way we produce meat is hugely inefficient — and is crying for Silicon Valley-style disruption. That's why he's investing in chicken-less eggs.

You can already walk into one of hundreds of self-serve frozen yogurt franchises in the U.S., pick up a cup, fill it with your desired flavor, load it with toppings and weigh it before paying at the register.

Yet one D.C. startup thinks it has found a way to make that process even easier — with a frozen yogurt vending machine called Frobot. It's following the footsteps of other food bots — like the pizza vending machine and the sushi bot — trying to make food delivery that much simpler.

For $3, payable only by credit card, Frobot dispenses a 7-ounce serving of one rotating flavor of the creamy confection.

At the bot's launch in late June at UberOffices, a co-working space in D.C., its creators said they hope the technology changes the face of "fro-yo," not unlike the way that Uber — now valued at $17 billion — has transformed urban transportation.

"We always felt that Frobot was a machine that should exist," says Jeremy O'Sullivan, 27, one of the creators of Frobot. "This is about bringing frozen yogurt where frozen yogurt wasn't before."

O'Sullivan and his business partner Melissa Nelson began designing Frobot in 2011 and installed their first prototype in May.

The two chose D.C. to launch because they wanted to see if an innovative product like Frobot could make it in the "city of red tape," O'Sullivan tells The Salt.

The first taste seemed to go over well with customers.

"It's very fluid and easy. You just swipe, grab your yogurt, and it's over," says Mallika Padmanabhan, 25, who enjoyed her first robot-served scoop of vanilla at the launch.

By 2015, O'Sullivan says, he plans to have more than 100 units across the country. Specifically, he plans to target college campuses and grocery stores, such as Wegmans.

But success is not a sure thing.

Pinkberry and Yogurtland have been expanding. Frozen yogurt sales grew 74 percent from 2011 to 2013. But frozen yogurt orders at restaurants (including yogurt-specific chains) actually peaked around 1991-92, according to the market research firm NPD Group.

Still, O'Sullivan is convinced his Frobots, which cost about $30,000, are cost-effective. "We built Frobot to be labor-saving," he says.

The creators say they plan to partner with commercial and local frozen yogurt vendors to distribute their product, which as of now does not include toppings. So, sprinkles with your "fro-yo" is currently a no-go.

Every morning for the past month, Joshua Margolin, 25, who works on the floor above Frobot, has checked out the machine's latest flavor on Twitter. If Frobot announces that the day's flavor is something like mango or cake batter, Margolin races down at lunchtime.

"You don't have to leave the building to get fro-yo — it's just there," Margolin says.

Convenience is Frobot's main selling point. In D.C., just across the street from where the current prototype is located, there's a Pinkberry frozen yogurt shop. But when people are hard at work, O'Sullivan says, they don't want to walk across the street for their favorite treat.

Nicholas St. Fleur is an intern with the NPR Science Desk.

An earlier version of this story suggested that O'Sullivan wanted to see if his company could make it through Washington, D.C.'s strict health regulations. In fact, the company has already received food safety licenses from the city.