Accessibility links
Alcohol Test: Does Eating Yeast Keep You From Getting Drunk? : The Salt When we read about a way to stave off intoxication in Esquire, we were dubious. So we bought a Breathalyzer and a few IPAs and tested out the kooky theory. 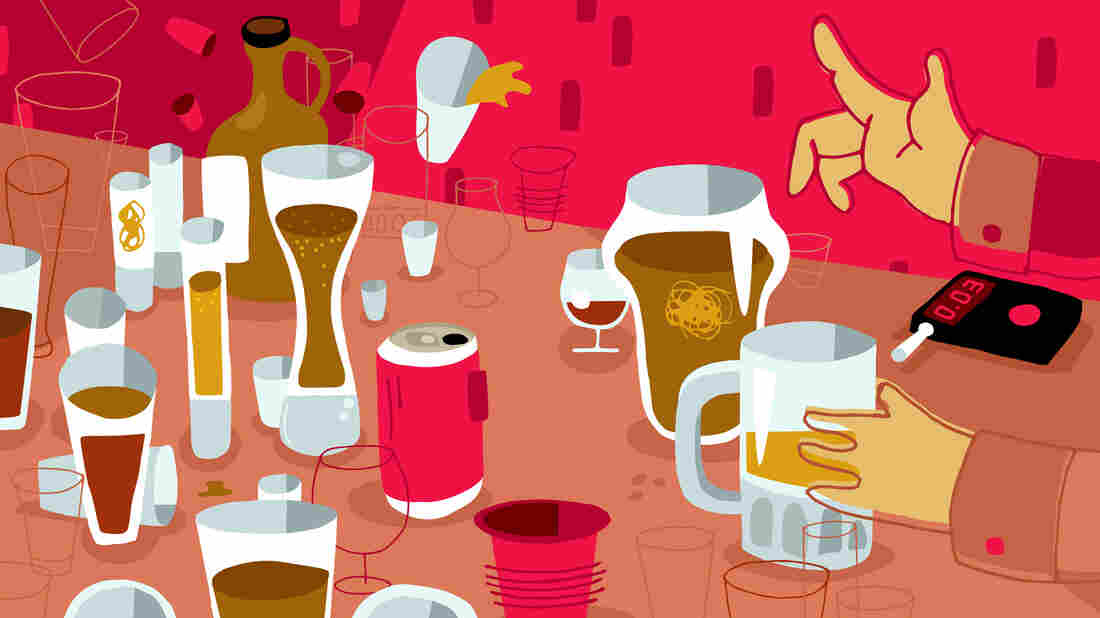 The idea that it might be possible to keep drinking a delicious bottle of pinot noir or tall bottle of beer and go right back to work is a tempting one. Alex Eben Meyer for NPR hide caption 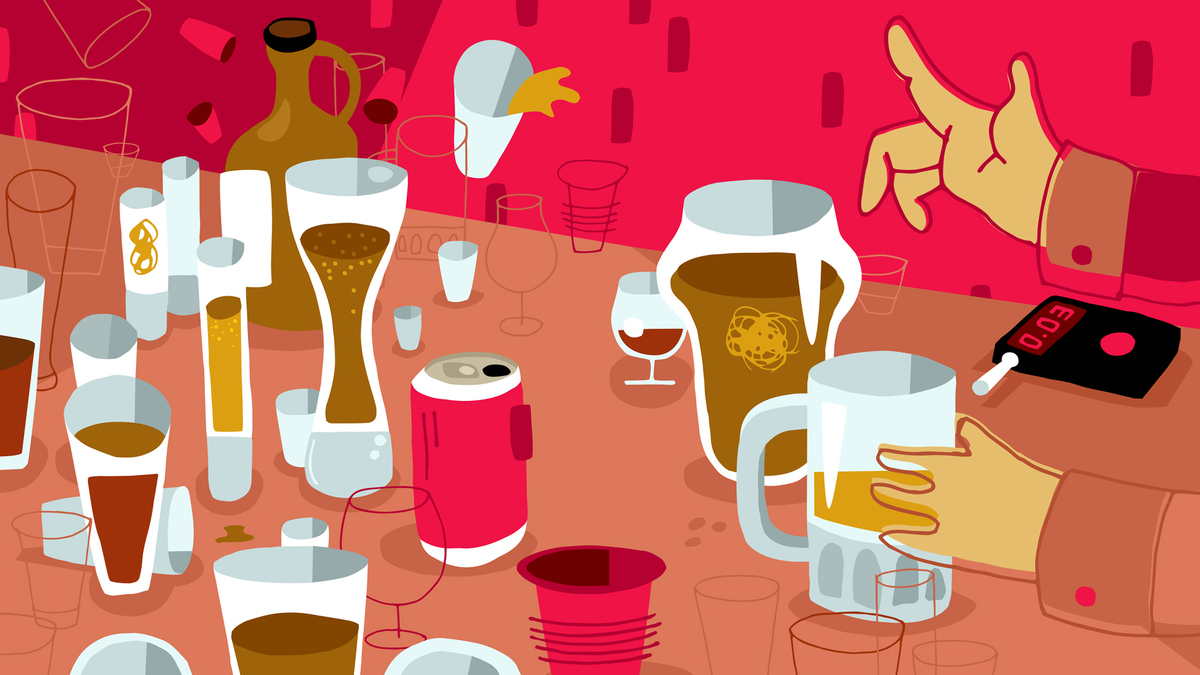 The idea that it might be possible to keep drinking a delicious bottle of pinot noir or tall bottle of beer and go right back to work is a tempting one.

Sometimes we drink with the sole purpose of relaxing, or drowning the week's worries. But other times we just want to savor a special craft beer or vintage wine, or make that good meal taste even better.

And as we get older, we're warier of that third or fourth glass. The consequences of too much alcohol — the drowsiness, the confusion and the wobbling — are a bigger hindrance. And let's face it: A hangover at 36 isn't the same as one at 22.

So when we came across a tip in Esquire for staving off intoxication, we perked up. You mean I might be able to have another glass of pinot noir or a third IPA without getting as loopy? Tell me more.

Jim Koch is a professional drinker. As the founder and brewer of Sam Adams, Koch tastes every batch of beer Boston Beer Co. makes before it leaves the brewery. This involves a lot of sipping, sometimes well before noon.

To keep his mind sharp and taste buds savvy through all those lagers and ales, Koch has a secret: He mixes a teaspoon of baker's yeast with a small amount of food — usually yogurt — and gulps it down immediately before laying into a pint.

"I've been doing this for 10 years," Koch tells The Salt. "I experimented with this in the beginning with portions until I got it down."

Yeast are microscopic, single-celled fungi, and Koch's explanation is that they break down some of the alcohol in the stomach before it gets absorbed in the bloodstream. "It mitigates the effect of alcohol," he says. In other words, it allows him to drink at 9 a.m. and go right back to running his company.

Now, Koch didn't make up this trick. He learned it from biochemist and legendary brewer Joseph Owades, who helped to develop low-calorie, light beers.

And it sounds like it might work. Yeast has an enzyme, just like our own livers and stomach linings, that can break down alcohol. (It's called alcohol dehydrogenase for all you biochemistry boffins.)

But we were dubious. Yeast makes alcohol from sugar. If it were good at degrading it, wouldn't it eat up all the ethanol in wine and beer?

Though there's plenty of research showing that food in the stomach slows the absorption of alcohol into the bloodstream, we couldn't find anything on yeast doing the same thing.

And as science writer Adam Rogers notes in his new book, Proof: The Science of Booze, there's been little research in general devoted to the question of how to temper the effects of alcohol while drinking.

We broke the "study" into three separate tests:

Before each test, we fasted for eight hours. This ensured that our stomachs were empty and there would be no question of food interfering with the results.

The goal? To find out whether eating yeast mixed with yogurt, or drinking extra water, while drinking would suppress our BAC, the only true measure of "drunkenness" since our sense of it varies so much physically — and psychologically — person to person.

To refresh you, 0.08 is the BAC limit for driving, though the National Transportation Safety Board has recommended that it be lowered to 0.05. (Driving can be impaired at levels as low as 0.01, the NTSB says.)

We took BAC readings using a calibrated BACTrack S80 Pro Breathalyzer, reportedly the most reliable on the market.

While as scientific as we could manage, our tests involved just three people of average weight in their mid-30s; we don't claim to be a representative sample. And even among the three of us, you'll see there was variation in how much alcohol we absorbed and how quickly it entered and left our bloodstreams.

But a few conclusions were clear: Yeast in yogurt doesn't slow down the absorption of alcohol very much — perhaps only a tad. But drinking a bunch of water before and between beers might have a slightly bigger effect on peak BAC than the yeast-yogurt combo.

So what's going on? Why didn't the yeast gobble up all the ethanol in the beer before we absorbed it?

"Yeast can degrade ethanol," says microbiologist Benjamin Tu of the University of Texas Southwestern Medical Center. "But they love other sugars — glucose, maltose — more. When those sugars are around, the cells turn off the genes needed for alcohol degradation."

Many beers contain some leftover sugars that don't get fermented. Yogurt has sugars, too. So if Koch is eating the yeast with yogurt, that offers the fungi something more tempting than alcohol.

Plus, Tu says, the yeast most likely won't have time to degrade the alcohol before our digestive tracts absorb it. "I think the exposure time of the alcohol to the yeast is too low," he says. "Any effect of the yeast [on BAC] will be marginal."

To be fair, Koch never claimed this is for everyone. "I can't say it works for everybody. It works for me," he tells us.

We Didn't Believe In 'Artisanal' Toast, Until We Made Our Own

Koob thinks that Koch might just have a higher tolerance for alcohol, meaning his liver can metabolize the alcohol more quickly.

As for our results with water, we were able to show that drinking enough of it might lower your BAC below what it would normally be. Why?

We think the explanation is simple: The water dilutes the alcohol in your stomach.

Several studies have found that alcohol absorbs more quickly into the blood when the drinks are higher proof. For instance, a vodka tonic is likely to get you drunk faster and more quickly than a glass of wine. And wine will be quicker than a beer, one recent study showed.

This is also why women generally are more likely to be more intoxicated from the same amount of alcohol as men of a similar weight. According to Koob, women have less water per pound than men, and alcohol hangs out in the water part of our bodies.

But we wouldn't really recommend pounding 32 ounces of water with each drink — it's unpleasant to put that much liquid in your body in such a short time, not to mention potentially dangerous.

OK, so we didn't learn the ultimate trick to drinking without getting drunk, but we did enjoy monitoring our experience of intoxication. For one thing, having a Breathalyzer in your pocket makes you pretty popular at parties. (Of course, you'll get a lot of faulty BACs if you pass it around, since you have to wait at least 20 minutes after drinking to get an accurate reading.)

Another key finding is that there's a sweet spot in getting buzzed, at about 0.04 BAC. No shocker: It's better to underdrink than overdrink. The closer you get to 0.08 BAC, the more likely you are to be impaired, says Koob.

So if you want to keep away from that danger zone, you'll have to do it one of the old-fashioned ways: passing on the next drink or drinking slowly with a meal. Or why not try a lower-alcohol wine or a session beer?

In an earlier version of this post, the y-axes on the authors' Blood Alcohol Concentration, By Hour graphs were off by two decimal points. The correct range is .02 to .10 percent BAC, not 2 to 10 percent.