Accessibility links
This Fine Wine Made At An Italian Penal Colony Is No 2-Buck Chuck : The Salt Off the coast of Tuscany, prisoners serving the end of their sentences are learning to make wine from a 30th-generation winemaker. It's a unique approach to rehabilitation that seems to be working. 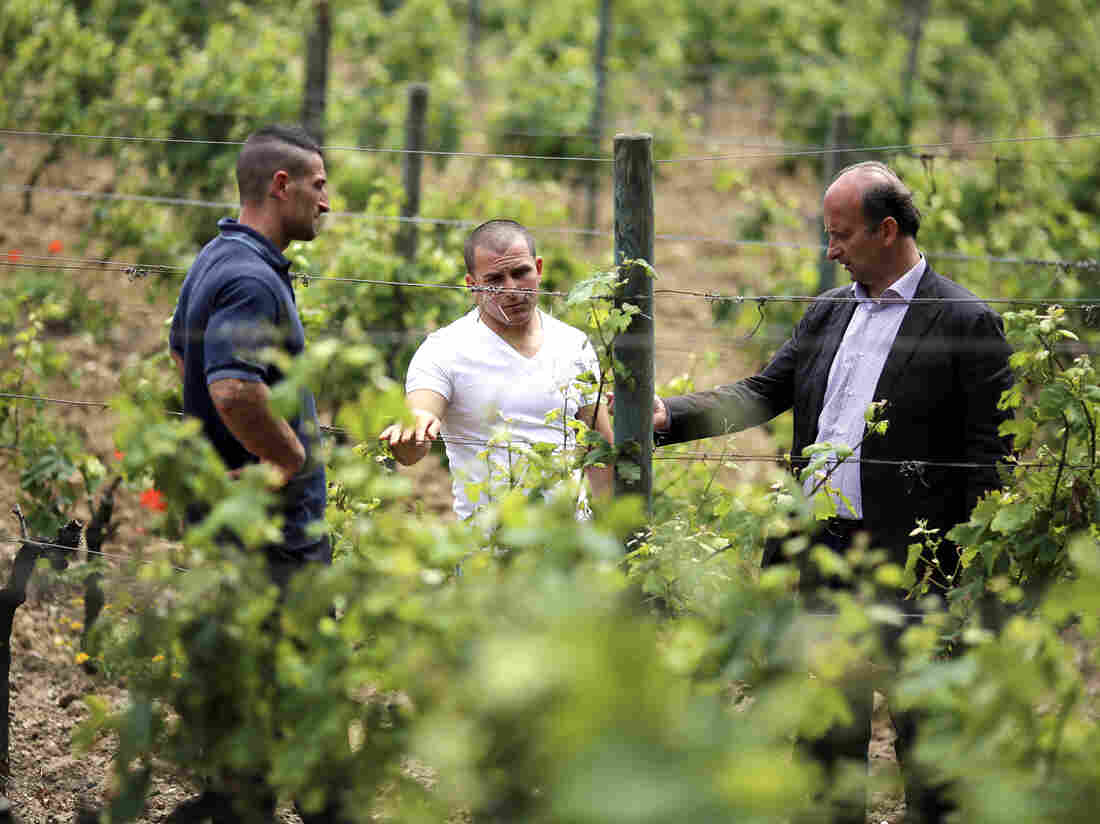 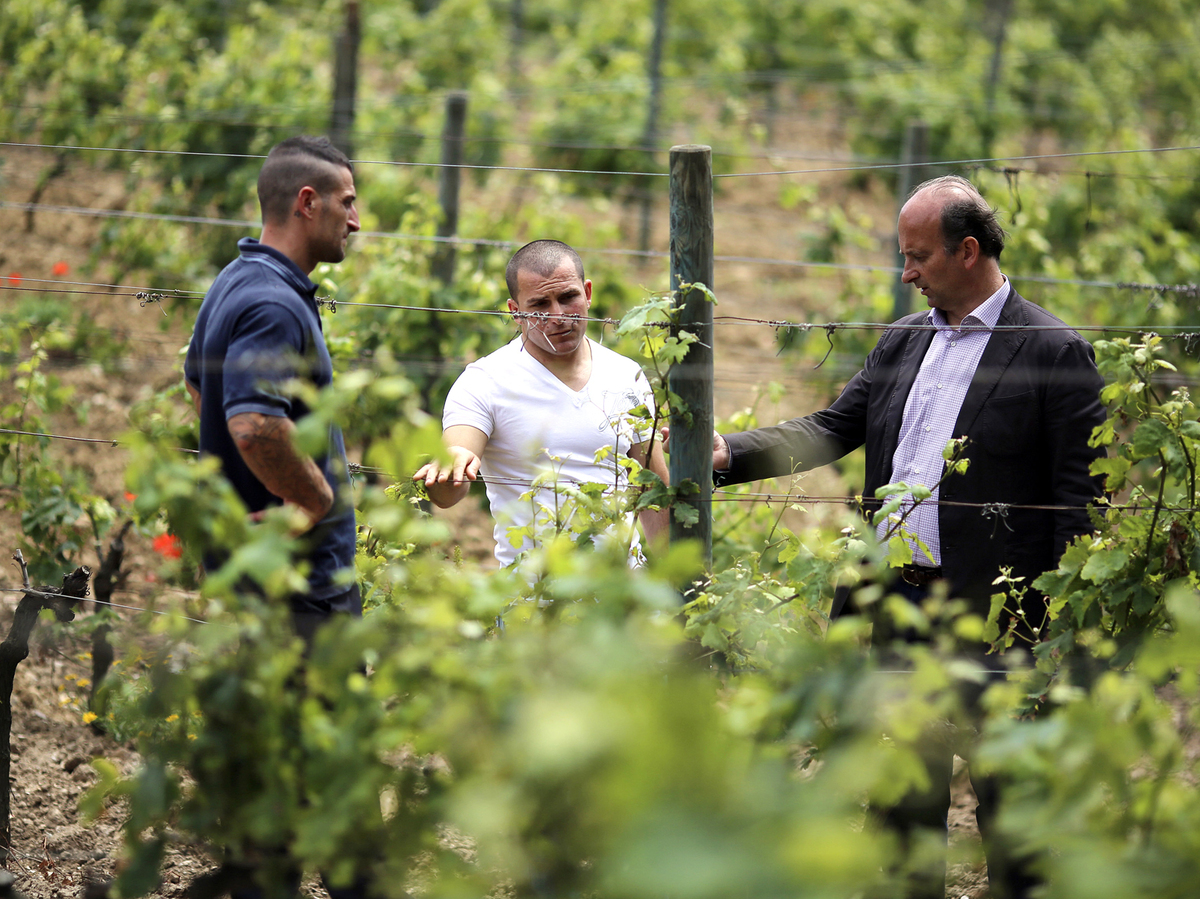 Marquise Lamberto Frescobaldi (right), of the winemaking dynasty, talks with prisoners Brian Baldissin (left) and Francesco Papa at his vineyard on Gorgona island in June 2013.

Eighteen miles off Tuscany's coast, Gorgona is Italy's last island prison. Its steep cliffs rise up from azure Mediterranean waters. Here, a select group of convicts serves the end of long sentences by farming. And now, a legendary winemaker is training them to make high-end wine.

Mentioned by Dante in The Divine Comedy, Gorgona was for thousands of years a refuge for hermits and monks. Since 1869, it's been a penal colony.

With Italian prisons among Europe's most crowded, serving time here is very attractive. Prison guard Mario Pascale says Mafiosi and sex offenders are banned. The 69 inmates who are here know they've come for work and rehabilitation.

"They've got to be trustworthy," says Pascale. "By the time they get here, they've already spent many years in jail — at least half of a 20- to 30-year sentence for very serious crimes."

It's a steep trek from the boat up to the 2.5-acre vineyard where Umberto Prinzi tends the vines. When he landed on Gorgona, he looked around for a guard to cuff him. But he was told he was free to move around on his own.

"That was fantastic," he says. "In other prisons I was locked up for 22 hours a day in a cell 2-by-3 yards wide. Here I'm outdoors from morning to night."

Inmate Benedetto Ceraulo works in the wine cellar. He was convicted of the sensational contract murder of Maurizio Gucci — he of the leather fashion empire — on the orders of Gucci's former wife. 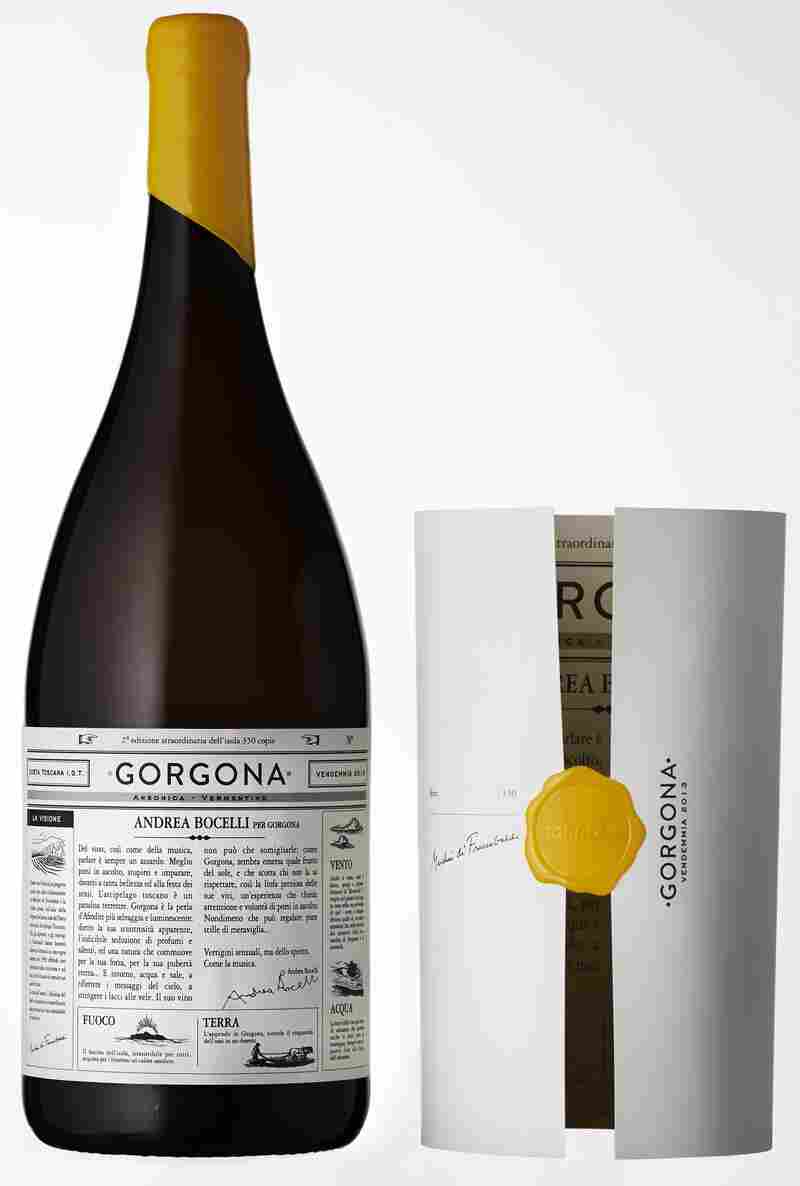 The 2013 Gorgona vintage label was written by tenor and singer-songwriter Andrea Bocelli, who is from the mainland of Tuscany. Courtesy of Lamberto Frescobaldi hide caption 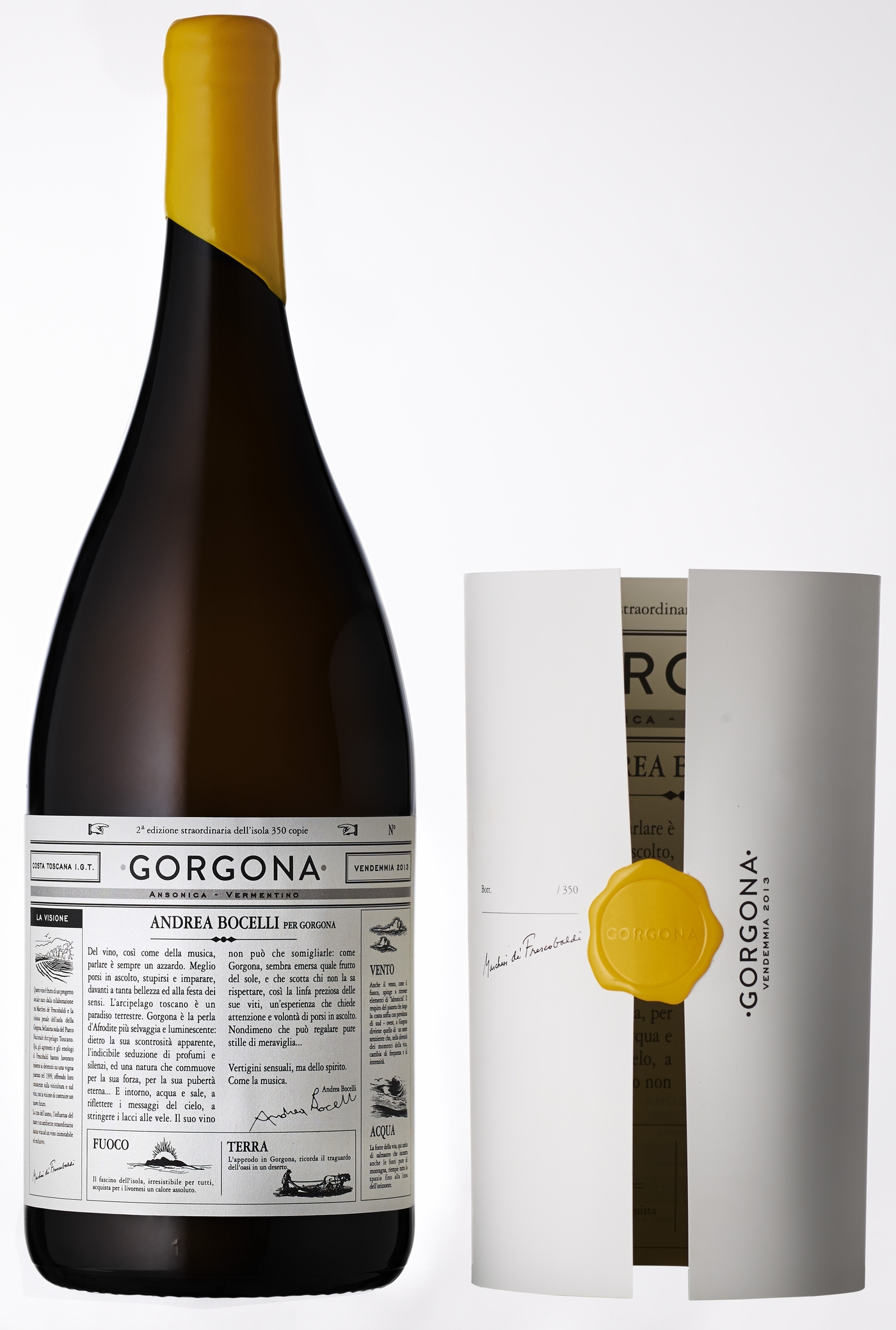 The 2013 Gorgona vintage label was written by tenor and singer-songwriter Andrea Bocelli, who is from the mainland of Tuscany.

Here, the 56-year-old has learned lots of skills. "It's been an enriching experience; it's made me feel better. ... I take care of the beehives, and I make sculptures out of pieces of wood."

Gorgona Prison director Carlo Mazzerbo is a staunch environmentalist who says Gorgona is an ideal place to discuss issues such as organic farming, vegetarianism and animal rights. He believes inmates should be encouraged to take part in the dialogue.

"In jail, they see the state as the enemy. They learn the less you speak, the better," says Mazzerbo. "Here, on the contrary, the point of this project is to give inmates a sense of responsibility and participation. That way, you help them change their views of life and values."

Two years ago, Lamberto Frescobaldi — the 30th generation of the Marchesi de' Frescobaldi winemaking dynasty that was supplier to many popes, to the court of Henry VIII and to Renaissance artists such as Donatello — answered a call from prison authorities about teaching prisoners skills that will help them find jobs once they're released. It's called The Grand Duchy of Tuscany Project, named for the Grand Duchy of Tuscany, which in 1786 became the first civil state in the world to do away with torture and capital punishment.

And it seems to be working. Among Italy's prison population, the rate of repeat offenders is 80 percent. At Gorgona, it's 20 percent, says Mazzerbo.

Today is a special day at the prison: The ban on alcohol has been lifted. Wine writers chatter and mingle with prison guards and inmates as long-stemmed glasses are filled with an amber-colored liquid. Marchesi de' Frescobaldi is hosting a wine-tasting under a pergola on a terrace overlooking the sea.

"Now we are tasting Gorgona 2013, our second harvest on the island," says Lamberto Frescobaldi.

Frescobaldi describes the taste: "of sage, of those dried herbs that you can find on the island, discreet but intense at the same time."

It's also "a taste of hope and a second chance for these people. Unfortunately [they've made] mistakes in life; they've misbehaved. But we have to give them a second chance when they're going to be out, and teach them to become a better person."

Inmate Umberto Prinzi says he used to drink just to knock himself out. Now, he cherishes the sample he's given of the fruits of his labor. "With every sip I take, I'm reminded of all the time dedicated to the vineyard. It's a different concept of drinking — very, very satisfying," he says.

Frescobaldi has signed a 15-year winemaking agreement with Gorgona. And he says he's willing to hire some of these workers once they're released.