Accessibility links
From McDonald's To Organic Valley, You're Probably Eating Wood Pulp : The Salt Many processed foods contain cellulose, which is plant fiber that is commonly extracted from wood. It's used to add texture, prevent caking and boost fiber. And it's been around for ages. 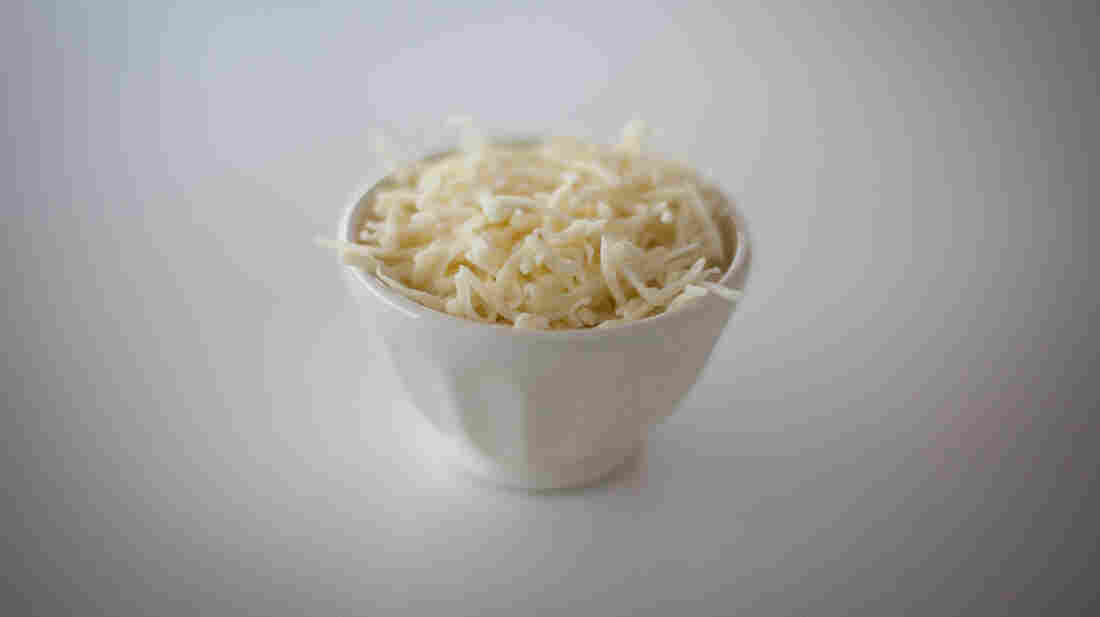 You can find wood pulp in several brands of packaged shredded cheese. It helps keep the cheese from clumping. Maggie Starbard/NPR hide caption

Do not be alarmed, but you may be eating wood pulp. Or at least an additive that started out as wood.

If you buy shredded cheeses, including brands such as Organic Valley and Sargento, or hit the drive-through at McDonald's for a breakfast sandwich or a smoothie, or douse some ribs with bottled barbecue sauce, there's likely some cellulose that's been added to your food.

Cellulose is basically plant fiber, and one of the most common sources is wood pulp. Manufacturers grind up the wood and extract the cellulose.

It's odd to imagine the same kind of pulp that's used to make paper turning up in our food. So, it's no surprise there's buzz over a spate of recent posts, from Quartz to the Los Angeles Times, on the food industry's widespread use of cellulose to help add texture and fiber to foods.

But there's not much new here. The FDA long ago green-lighted the use of added cellulose in foodstuffs. And, in our bodies this cellulose passes right through our GI tracts, virtually unabsorbed.

Food scientist John Coupland of Penn State says it doesn't matter much where the cellulose comes from. In theory, you could extract it from any plant, from asparagus to onions, but he says that would be a waste of good food.

"A good way to think about it is to ask: Would our food be any better or worse if the cellulose used was sourced from another plant?" And Coupland says the answer is no. "Cellulose is just a molecule, and probably one we want more of in our diets."

"Ah, yes, the 'wood pulp in cheese' stories," Elizabeth Horton of Organic Valley responded to us when we asked her about the headlines.

"Yes, Organic Valley does use cellulose in our shredded cheeses; it's a pretty standard anti-caking agent." So, it helps prevent the bits of cheese from clumping together.

Horton says there is work in the industry to find other sources allowed for organic use, but "the challenge is they are not as effective at anti-caking."

And, perhaps, not as cost-effective either.

We reached out to a supplier of cellulose, Sweetener Supply Corp. The company's Jon Bodner told us that there have been efforts to extract cellulose from a wide range of plants including oat and soybean hulls, corn stover and even hemp. "But establishing a new supply chain system to accumulate the [plant] materials is cost-prohibitive."

He points to an effort in the late 1990s to establish a cellulose pulp plant using corn stalks, leaves and husks, but it failed.

And now, there are additional challenges to using nonwood plants. For instance, lots of customers, Bodner says, are demanding non-genetically modified products. If the cellulose industry were to use corn stalks, leaves and husks or sugar beets, it would be a challenge to keep the supply chain free of genetically modified crop residue.

The baking industry has been defending the use of cellulose for more than 35 years. Back in 1977, the ITT Continental Baking Co. promoted its use of cellulose as a way to boost healthy fiber.

"We feel it's important to get the facts out," the baking company's John Colmey told The Milwaukee Journal back then. And it seems, decades later, the industry is still working to win consumer acceptance.