Accessibility links
If Exercise Feels Like Work, Mindless Snacking May Follow : The Salt The idea that sacrifice at the gym entitles us to a reward is embedded in our collective thinking. Researchers set out to test how this affects how we eat after a workout. 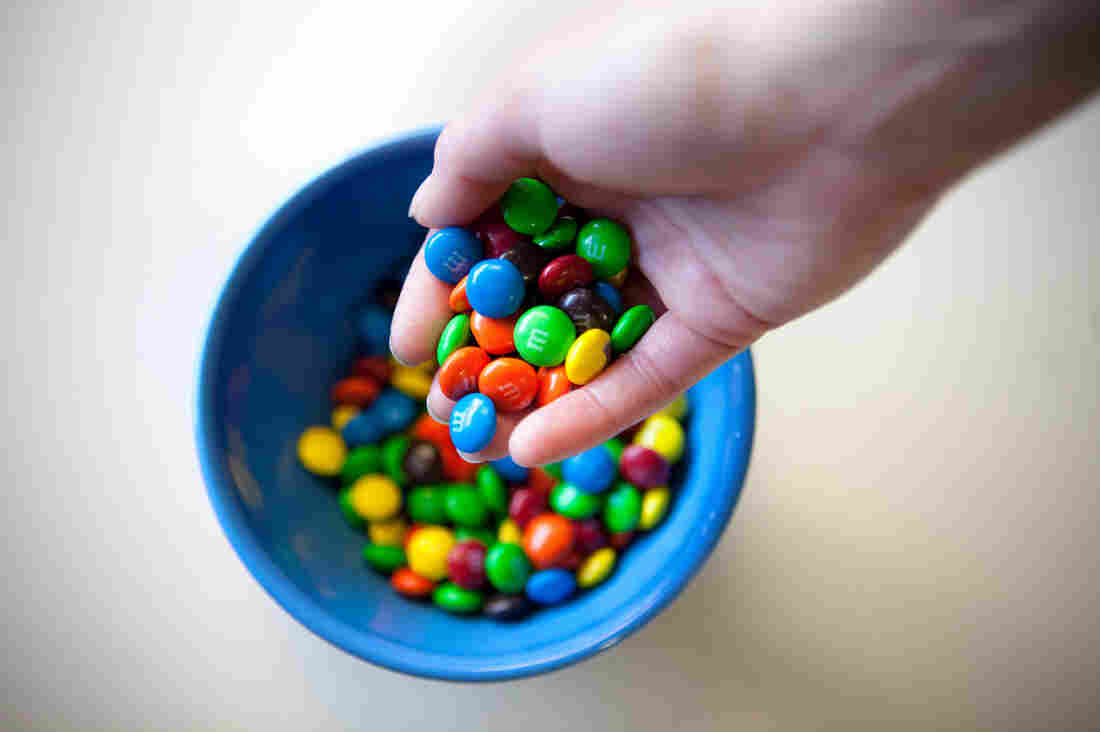 In a recent study, participants who focused on the exercise of walking ate more M&M's than people who focused on music while walking. Daniel M.N. Turner/NPR hide caption

If we hit the gym, don't we deserve a little extra something, maybe something sinfully sweet? The idea that sacrifice begets reward is embedded in our collective thinking.

But a fascinating new study from the folks at the Cornell Food and Brand Lab shows how this thinking might backfire. Thinking of exercise as work can lure us into mindlessly devouring calorie bombs, such as a big helping of pudding or extra handfuls of M&M's. And compensating for physical activity with sweet treats this way may lead to weight gain.

Brian Wansink, a professor of marketing, and his colleagues studied the behaviors of two groups of adults who were attending a consumer camp at Cornell. Just before lunch, a guide led one group on a walk framed as "scenic" to enjoy the view of the lake and wildlife. They walked 2 kilometers, or a little more than a mile.

Another group was led on the same walk at the same pace. But their guide framed the walk as exercise, as a real workout. "Half-mile to go!" the guide would call out, encouraging them to go the distance.

Then, Wansink observed what the participants ate at lunch. "The group that had framed their walk as exercise ended up taking 35 percent more chocolate pudding than the 'scenic' walk group," Wansink tells The Salt. And it wasn't even supertasty stuff; it was pudding from a can served in a bowl. The study is published in Marketing Letters this month.

So, was Wansink surprised that scenic walkers, who believed they were just supposed to be enjoying the birds and the stroll, ate so much less?

"I knew the compensation would happen," Wansink says. "What I found surprising is that ... it only really happens with dessert." The exercisers didn't eat more salad or vegetables.

Wansink found similar differences among another group of campers, who were instructed to listen to music as they walked. The guide told them to focus on the music, asking them, for instance, where they heard the music more clearly.

Wansink documented that the music-focused walkers consumed far fewer M&M's offered up as a snack after the stroll, compared with participants who had just focused on the exercise of walking.

It's a lesson in how we frame things in our mind. Don't think of your workout as, well, work. This might bias you to seek a reward at the end, and snack more.

"Do whatever you can to make your workout fun," says Wansink. "Play music, watch a video or simply be grateful that you're working out, instead of working in the office!"

You can find more tips from Wansink and his team on how to eat mindfully at Slim By Design.