Accessibility links
U.S. Customs Seize Giant African Snails Bound For Dinner Plates : The Salt Officials say the snails are "highly invasive, voracious pests" that eat paint and stucco off houses. But the snails are a prized delicacy in West Africa, where they're marinated or grilled on sticks. 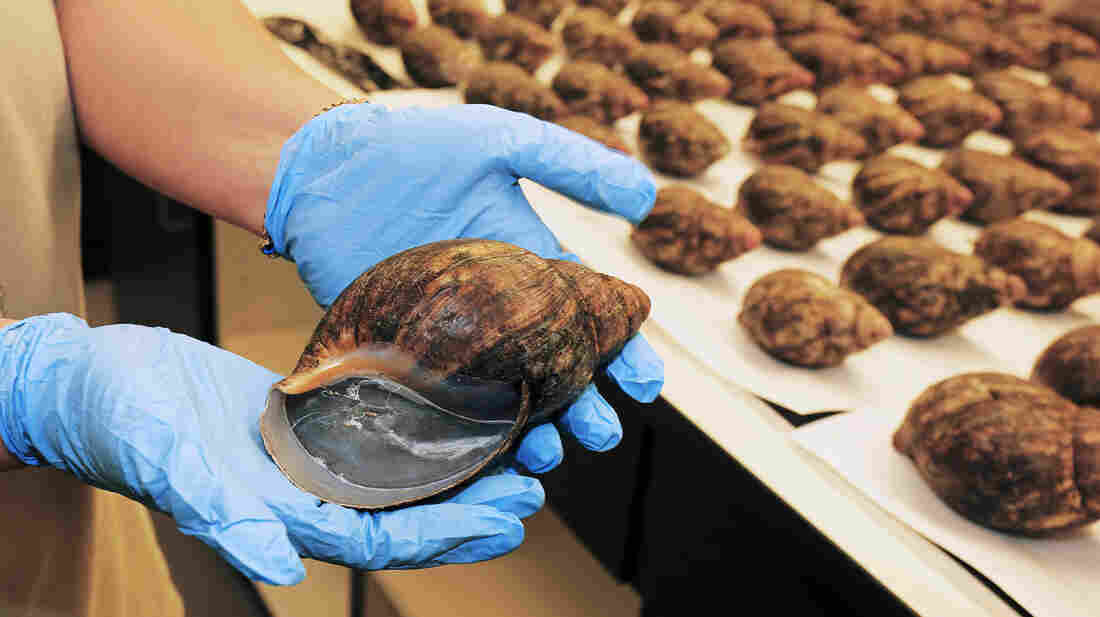 A single snail from an air cargo shipment of 67 live snails that arrived at Los Angeles International Airport on July 1. Officials said that the 35 pounds of snails arrived from Nigeria along with paperwork stating they were for human consumption. Greg Bartman/AP hide caption 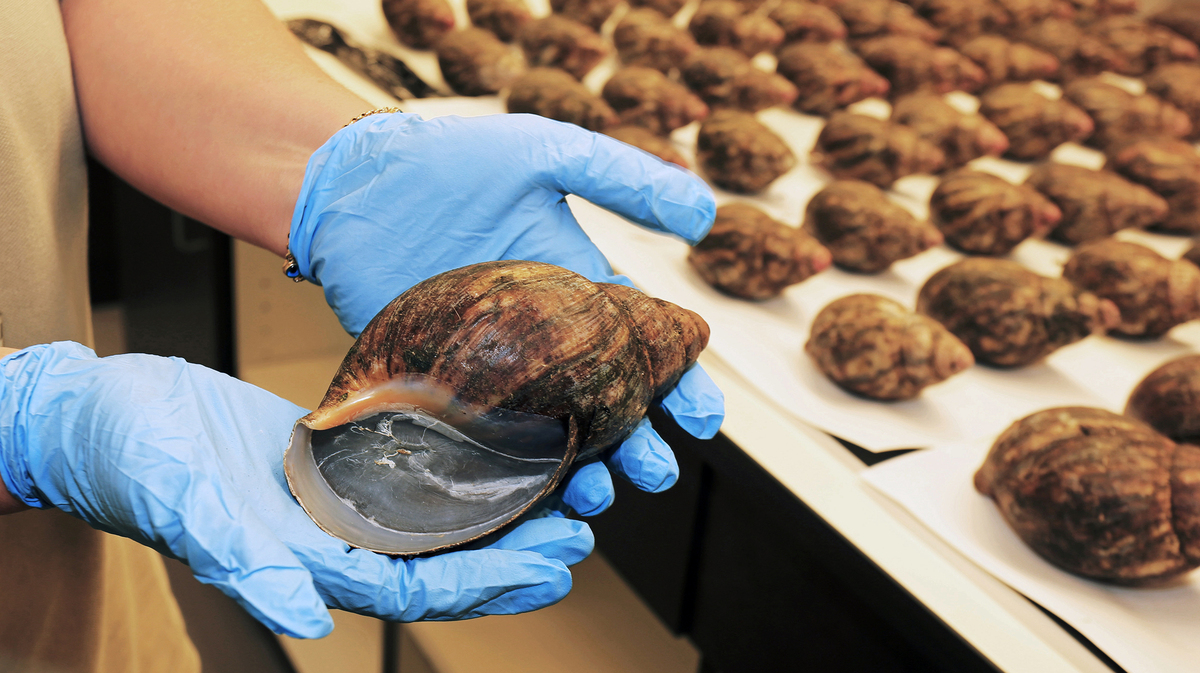 A single snail from an air cargo shipment of 67 live snails that arrived at Los Angeles International Airport on July 1. Officials said that the 35 pounds of snails arrived from Nigeria along with paperwork stating they were for human consumption.

Oh no! Snails are getting a bad name in the U.S.

I'm not talking about the delicate garlic-and-butter escargots that the French favor and savor.

It's giant African land snails, also known as Archachatina marginata, banana rasp snails or a number of other names they go by.

I hadn't realized the snails could be such a pest. But customs' inspectors at Los Angeles International Airport recently seized a shipment of 67 of them from Nigeria, labeled "for human consumption."

News reports describe the snail shipment as weighing a total of 35 pounds. Each snail was larger than a human palm, measuring up to 6 or 8 inches.

U.S. Customs and Border Protection says the snails are "highly invasive, voracious pests" that eat paint and stucco off houses and can munch their way through 500 plant species, if they can't find fruits and vegetables. 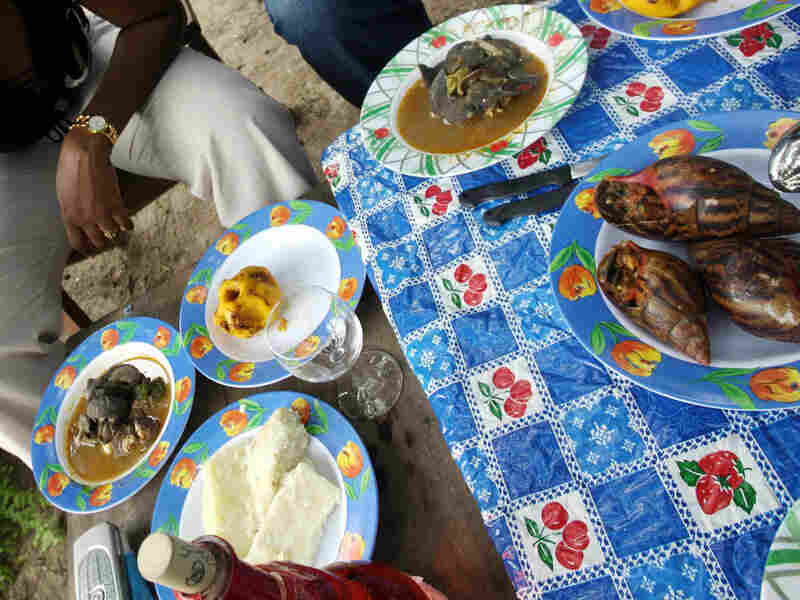 A woman eats snails in Ahoue, a village in Ivory Coast, during a snail festival in 2006. Kambou Sia/AFP/Getty Images hide caption 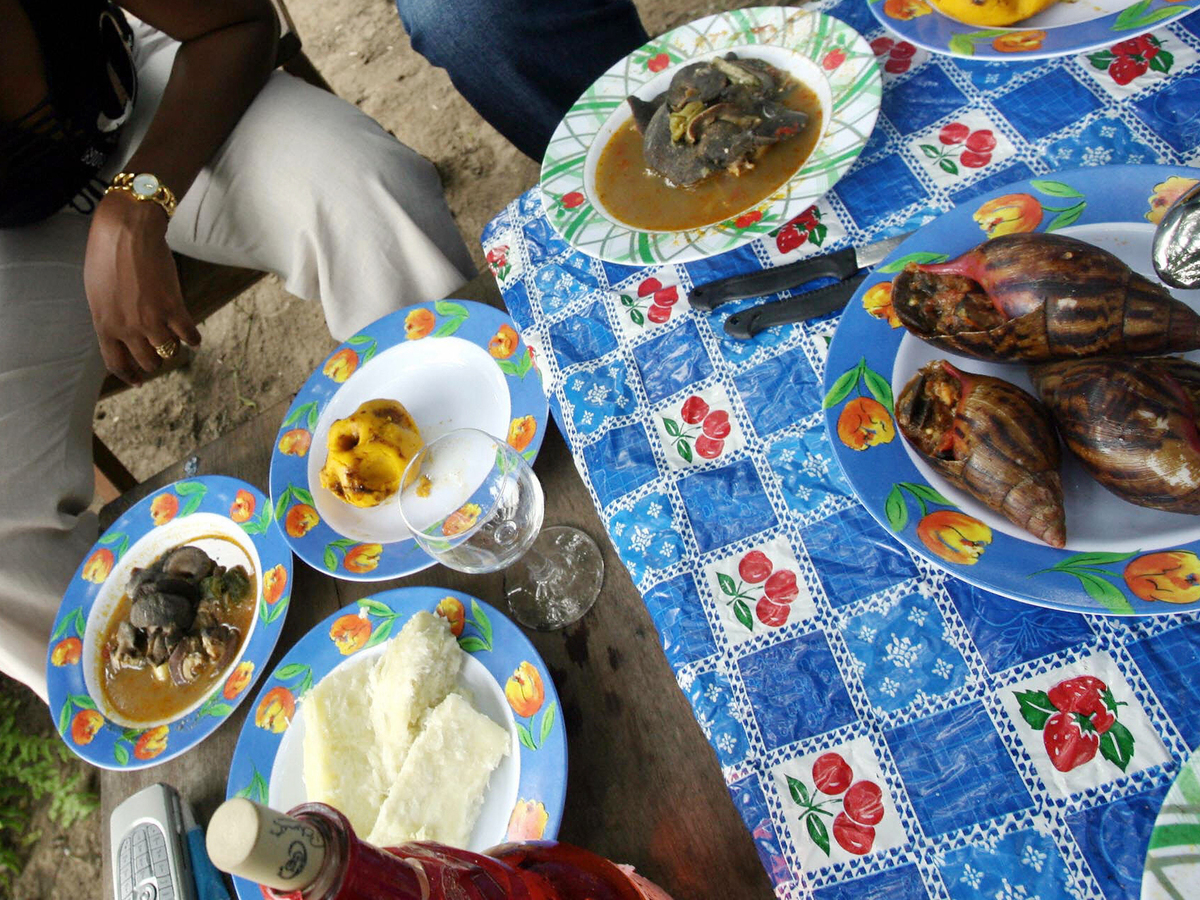 A woman eats snails in Ahoue, a village in Ivory Coast, during a snail festival in 2006.

Officials warn they're also a serious threat to the environment and public health because they can carry parasites that could lead to meningitis.

After being intercepted on July 1, the pests went for extensive tests before meeting their end in the incinerator.

But I keep thinking about how they'd probably been special-ordered for a banquet or a snail barbecue or fest — one for each guest.

As Ghanaian children, we were raised on these large, black, slightly rubbery snails. And it seems the 67 were not imported for any sinister purpose, rather for the pot.

Snails are a delicacy in West Africa. We flavor soups with them. Peppered snails with sautéed onions and tomatoes, garlic and chilies: divine. And they can be minced or marinated and impaled on kebab sticks for grilling. Any which way, they taste good.

You can buy them by the roadside in long strings — or in Ghana's legendary markets, where you'll barter over the price. In Nigeria, women balancing large, round metal trays on their heads sell fragrant, chili-spiced snails on the streets.

I have an iron stomach, I tell myself. I cannot resist them!

Over the years, I've convinced a number of friends — whose diets and eating habits did not include giant snails — not to be repulsed or put off, but to enjoy them.

Plus, snails are nutritious, I'm told — a good dose of protein, a pinch of carbohydrate and a drizzle of fat. They're also an excellent source of iron and other essential minerals, including potassium and phosphorus.

A dear friend, who has become a champion of the African land snail for the cooking pot, took a while to come round. But she has become a dab hand at cooking — and eating — snails.

She stays well away from the slime, which oozes out when the mollusks are pried out of their large, striated black-and-brown shells for preparation.

I keep reminding her that we slice them lengthwise, not width-wise, but she has her own ideas about culinary presentation and now proudly serves snails at her table.

Viva Archachatina marginata! Long live giant African land snails, as long as they don't wander across from Africa to the U.S.