Accessibility links
Captain Ahab's Revenge: Brewing Beer From An Ancient Whale Bone : The Salt Yeast scraped from a 35-million-year-old whale fossil is the key ingredient in a "paleo ale" from a Virginia brewery. Like many scientific innovations, the idea came about late one night over a pint. 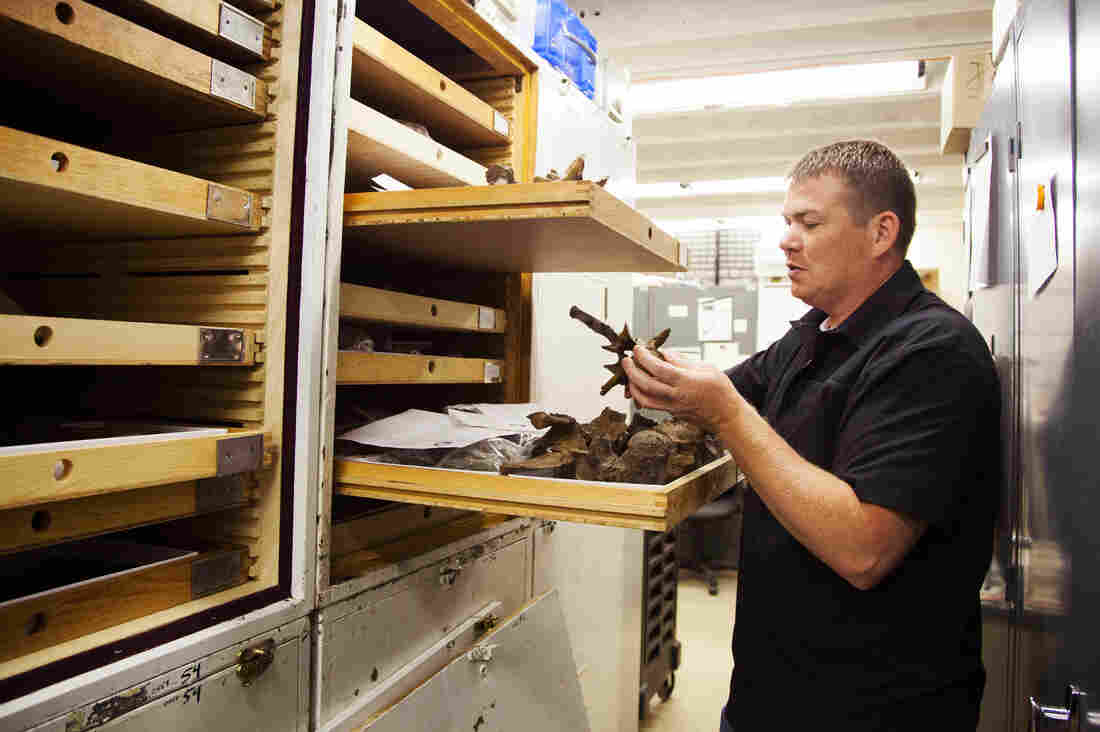 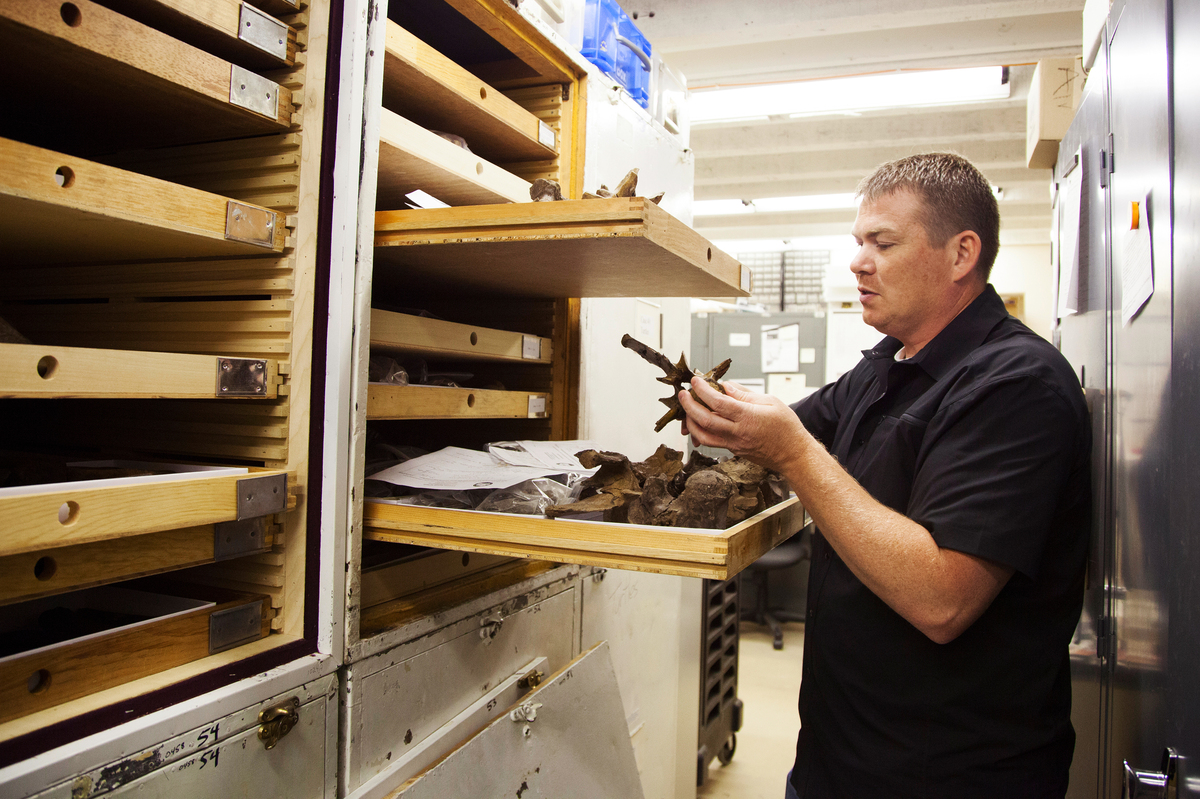 What happens when an amateur paleontologist with a love for beer teams up with a microbiologist? Bone beer, or beer made from yeast scraped from a 35-million-year-old whale fossil, to be precise.

Like many scientific innovations, Bone Dusters came to Osborne late one night while he was drinking a beer.

Osborne was hunched over his desk, studying ancient whale bones he'd collected on an underwater expedition, when he took a sip and began to ponder how beer has yeast — an organism that transforms sugar into alcohol — and yeast can be found almost anywhere. His gaze shifted from his glass to his fossil.

"I thought, even though this is dead, there's got to be things living on it," he tells The Salt.

And an idea began to brew.

Osborne enlisted his friend Akerboom to swab the fossil and a dozen more from the basement drawers of the Calvert Marine Museum in Maryland. Akerboom, a former research specialist at the Howard Hughes Medical Institute, didn't think the prehistoric bones could sustain yeast's appetite.

But in the name of science and great beer, he swabbed away. The results, he said, surprised him. While most fossils failed to create suitable yeast, Akerboom found one that fermented.

What he discovered was a wild yeast subspecies, which the pair named Saccharomyces cerevisiae var protectus, after the yeast's host, protocetid whale "Eocetus wardii," an early whale ancestor that Osborne had described in a 2011 paper in the journal BioOne.

The whale was a prehistoric beast that had hind legs, molars and canine-like teeth. Scientists say it may have been amphibious, dwelling on both land and water.

To retrieve the fossils, Osborne went 30 feet down into a Virginia swamp wearing full scuba gear and equipped with a type of crab cage. Down there, the violent water rushed past him like hurricane winds, he says. It was an "extreme sport for science."

"It's such a high risk," Osborne says. "But the yield of return is super awesome."

In this case, that yield is not just millions-of-years-old fossils, but bone beer.

Akerboom says that the yeast is probably not nearly as old as the fossil it was scraped from, but he believes that it came from the swamp that the bones were found in. And it behaves in mysterious ways.

"The fermentation is so strange. It stops and then continues. That's something we haven't seen before, not from our brewing strains," says Akerboom. 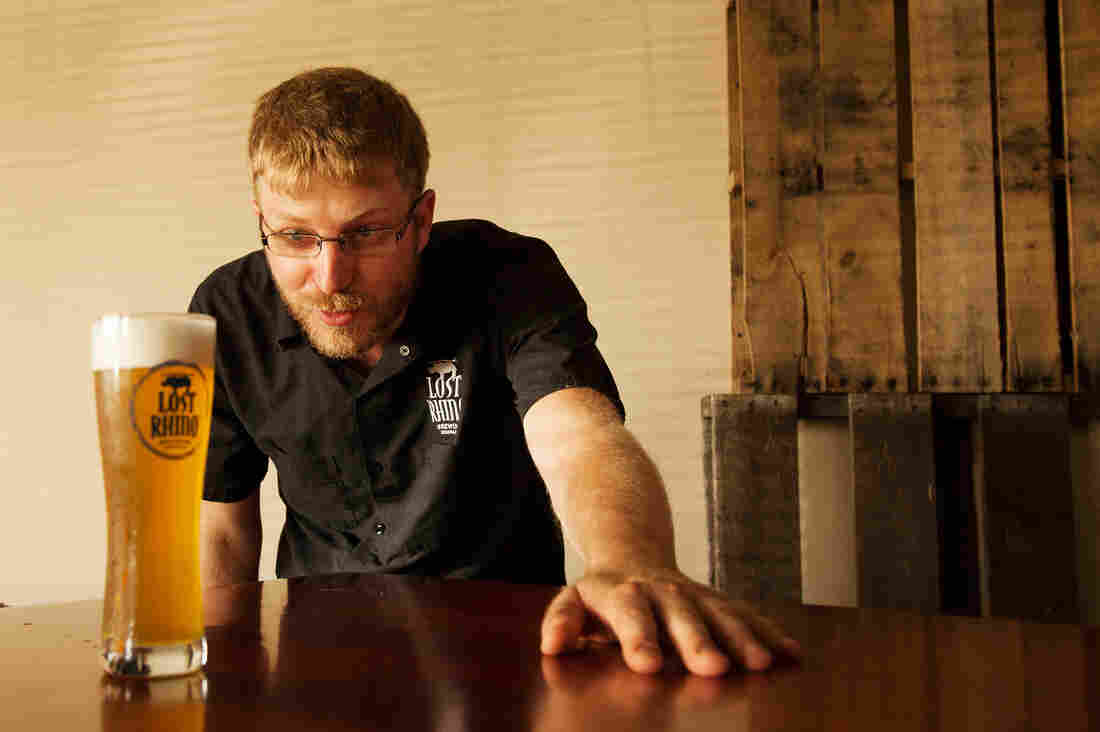 Jasper Akerboom of the Lost Rhino Brewing Co. in Ashburn, Va., tested a dozen yeasts before finding one that was perfect for making bone beer. Ryan Kellman/NPR hide caption 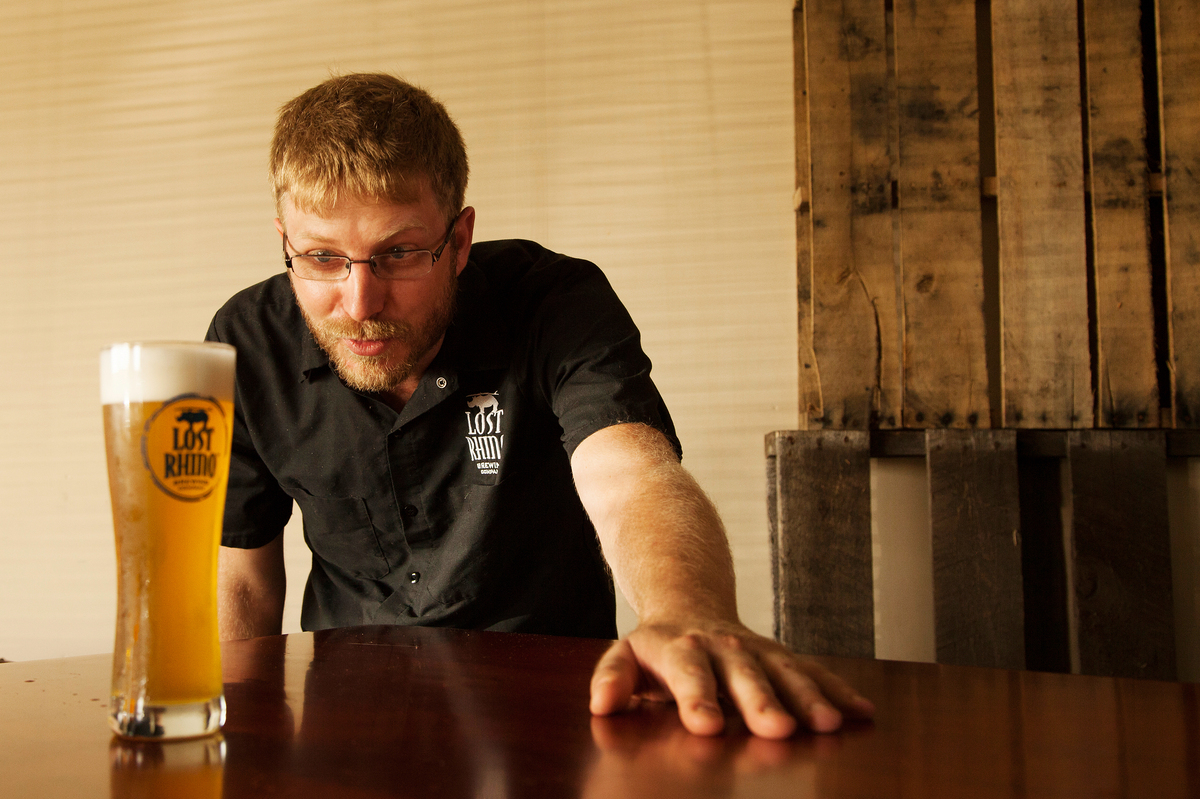 Jasper Akerboom of the Lost Rhino Brewing Co. in Ashburn, Va., tested a dozen yeasts before finding one that was perfect for making bone beer.

Osborne and Akerboom are not the first to craft a prehistoric brew. In a feat that resembles Jurassic Park, Raul Cano extracted yeast from the stomach of a 45-million-year-old fly entrapped in fossilized amber to create his own beer.

Cano, a microbiologist who now operates Fossil Fuels Brewing Co., raises some skepticism over the origins of the yeast Osborn and Akerboom discovered. 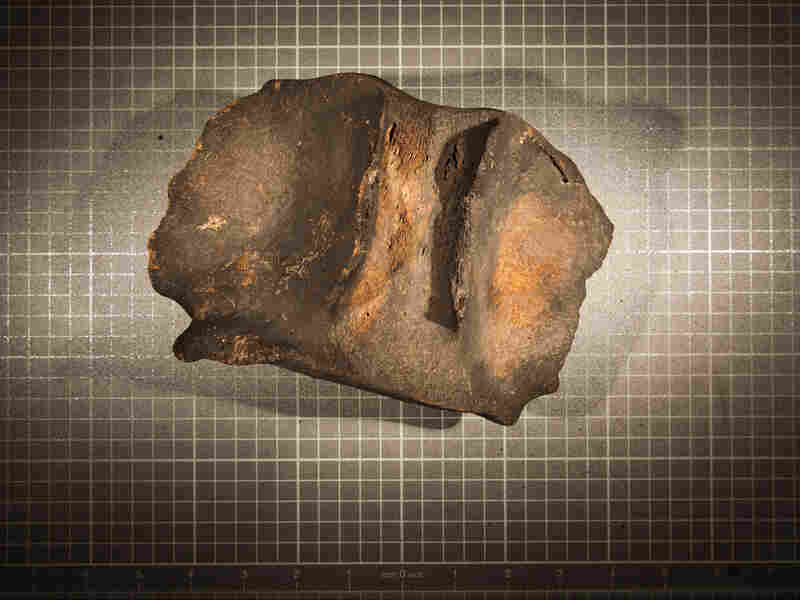 A piece of ancient whale vertebra similar to the one used in the creation of the Bone Dusters Paleo Ale. Ryan Kellman/NPR hide caption 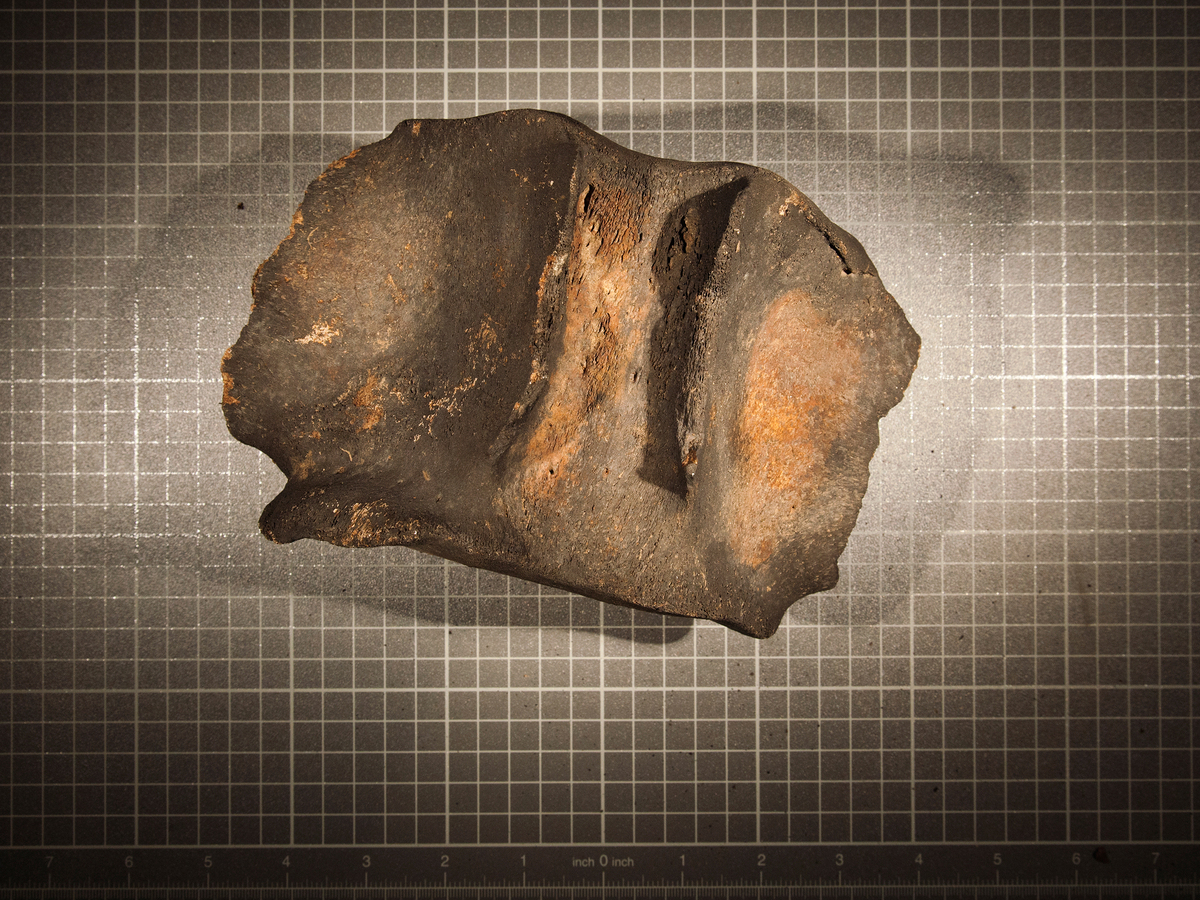 A piece of ancient whale vertebra similar to the one used in the creation of the Bone Dusters Paleo Ale.

He thinks that the yeast is most likely the product of contamination, whether from the museum or from the people who handled it.

But he praises the team's accomplishment. "Regardless of whether it came from a whale bone, or someone's fingernail, I think it's amazing."

But only the taste can take this brew from gimmick to classic, he says.

"You drink the first beer because of curiosity," Cano says. "You drink the second because it's good, so if people keep drinking it, I'm impressed."

At the Bone Dusters premiere in late June, scientists and beer geeks alike arrived to taste what Akerboom described as a citrusy, Belgium-style amber. Osborne will donate part of the Paleo Ale proceeds to buy microscopes for underserved schools in Virginia, he says.

"This was an adventure," says Osborne. "It's getting people excited about paleontology in a different way," one prehistoric pint at a time.

As you know, we here at The Salt love our beer, so stay tuned for an upcoming video poem celebrating beer ... and the evolutionary saga you can taste in every pint.