Accessibility links
Craft Beer Reaches New Depths As Mainers Brew A Batch From Seaweed : The Salt A craft brewer in Maine is partnering with a most unusual item — seaweed. If the beer takes off, the state's emerging seaweed aquaculture industry may benefit. 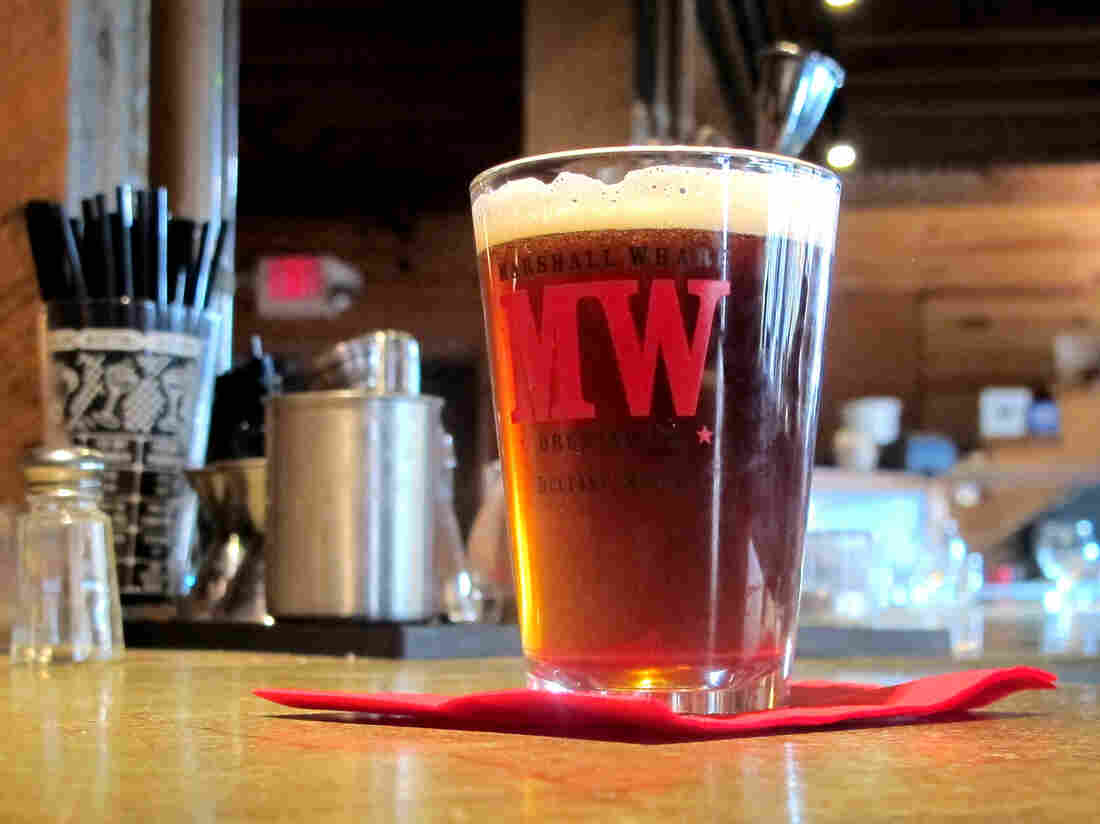 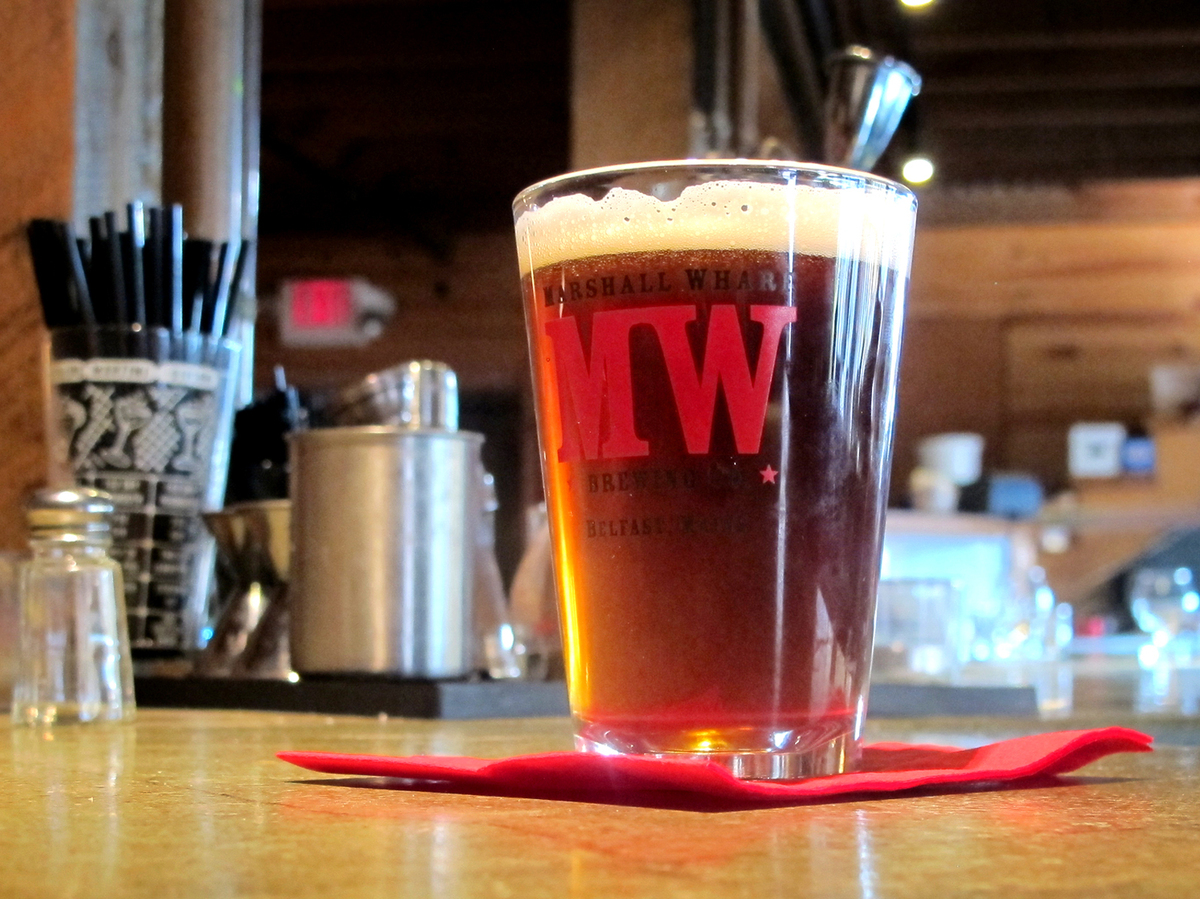 A glass of the seaweed beer created by Marshall Wharf Brewing Co. in Belfast, Maine. 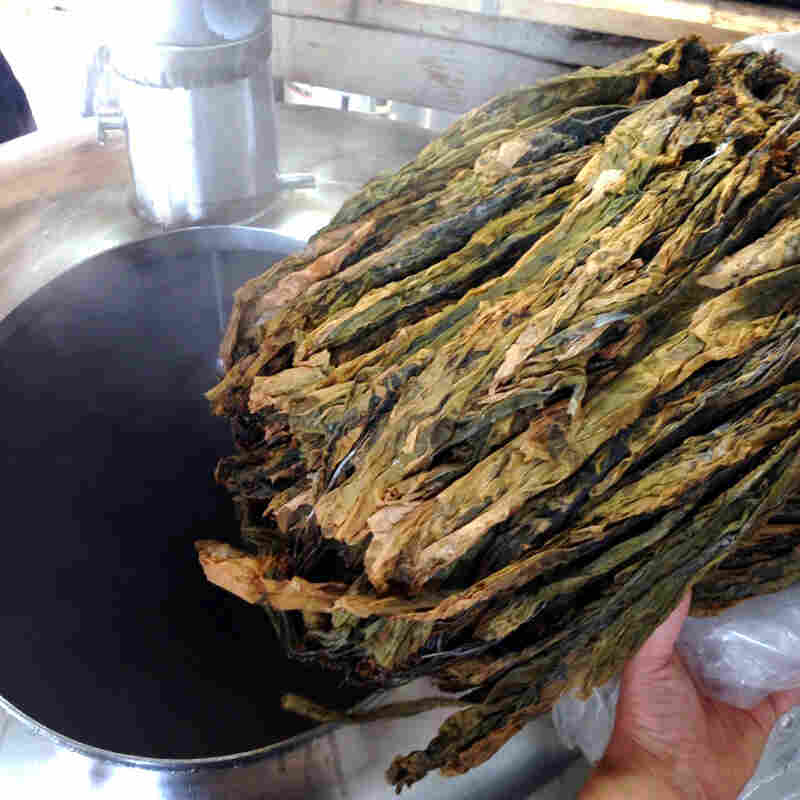 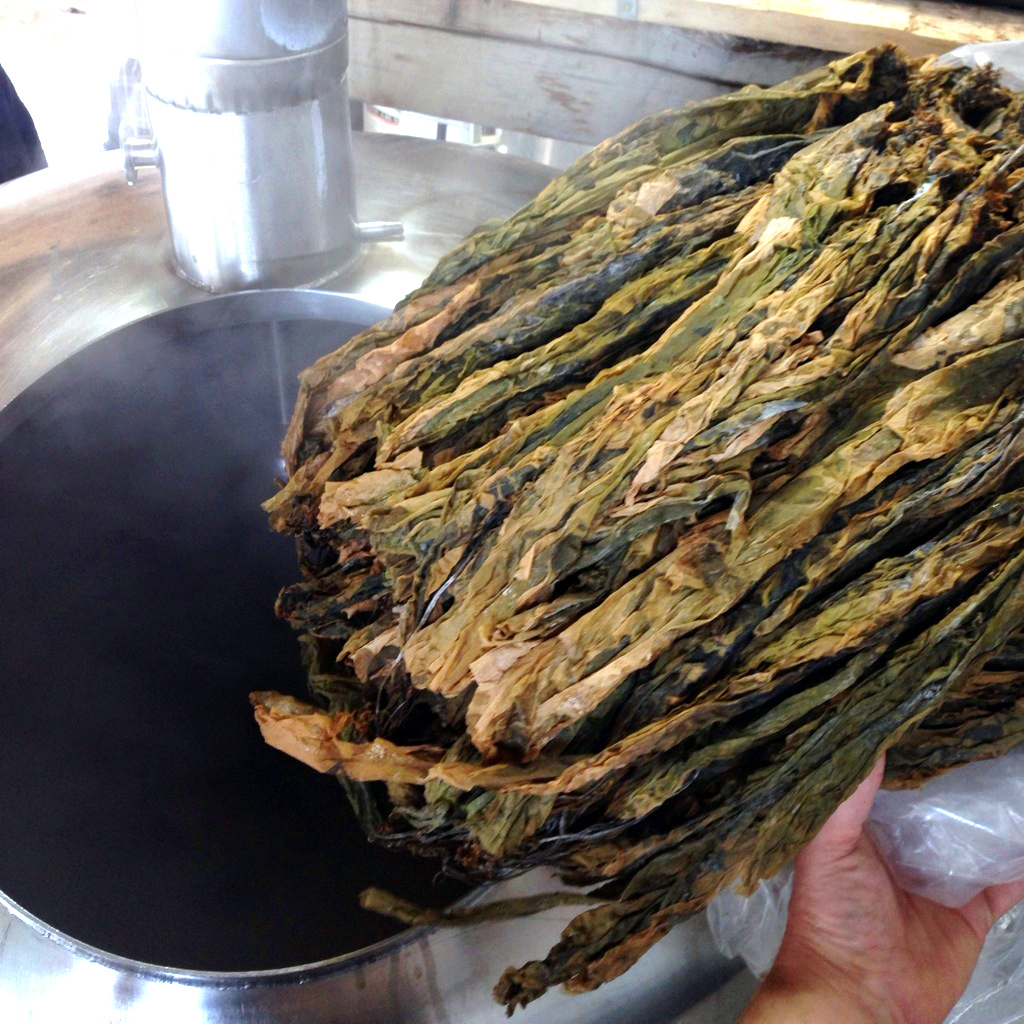 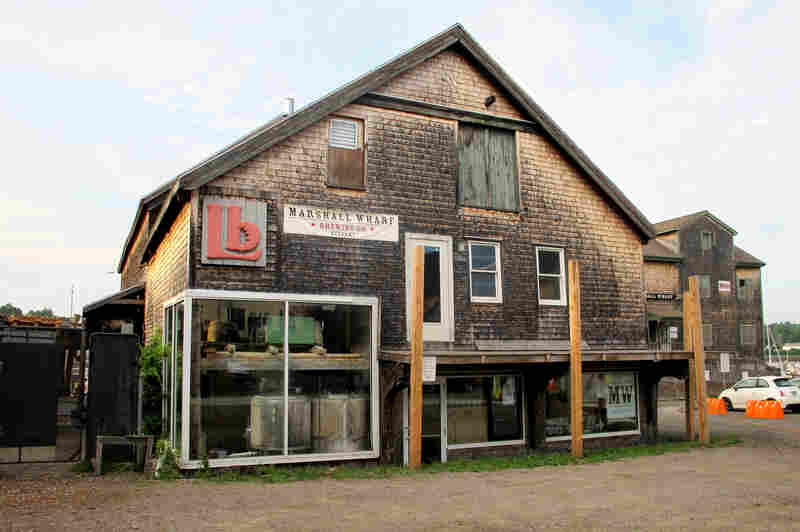 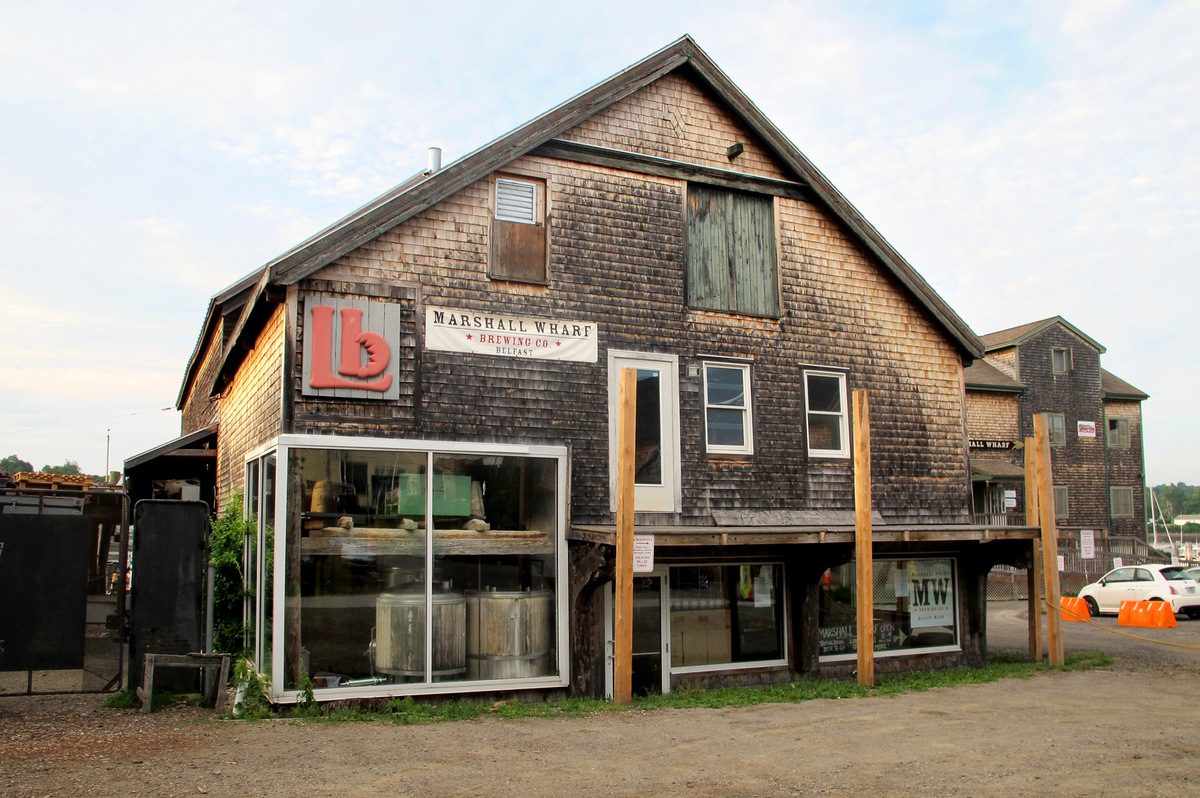 More craft breweries are using exotic ingredients in their creations these days. There are ales made with all kinds of fruit, beers infused with coriander and other spices, stouts brewed with oysters — even beer made from yeast scraped off 35 million-year-old whale bones. But what about a beer made with seaweed?

At Marshall Wharf Brewing Co. on the Belfast, Maine, waterfront, new beers begin their journey into draft lines and pint glasses inside two large tanks. Marshall Wharf has a reputation for making some unconventional beers — a stout with locally sourced oysters, for example, and a wheat-infused kolsch with jalapeno and habanero peppers. A few years ago, David Carlson, the brewing company's owner, discovered a beer from Scotland, called Kelpie, made with seaweed.

"If there's seaweed in Maine and it's a good product," he says, "why not try putting it in the beer?"

Few if any U.S. breweries have tried making beer with seaweed.

"We're taking a risk," says Carlson, "because when you build a recipe, you want to know everything that's going into it. You don't want to fly blind."

To lessen that risk, at least a bit, Carlson has been consulting with scientists like Sarah Redmond, an aquaculture specialist at the University of Maine's Center for Cooperative Aquaculture Research. Maine has been harvesting wild seaweed for years, but has only started getting serious about farming it.

"We know that if we can figure out how to farm it on sea farms, then we'll be able to provide more of a sustainable source of seaweeds," says Redmond, "for exciting new products in Maine and to drive new innovation." Products like fertilizer, food ingredients, nutritional supplements or even beer.

Redmond has become something of an activist for seaweed, teaching fledgling seaweed farmers like Peter Arnold how to seed kelp and other species and grow them on lines just off shore. Arnold runs Maine Fresh Sea Farms, a 6-month-old start-up. His business partner sells mussels to Marshall Wharf and told Carlson about the sugar kelp they were growing in the Damariscotta River in Bristol. Sugar kelp is found in all kinds of foods from Japan to Scotland.

"To have David call up and say, 'I want some for the beer!' was so exciting," Arnold says.

On a recent Wednesday afternoon Carlson and his crew are about to add some of Arnold's sugar kelp to a new brew, boiling away in one of the tanks at Marshall Wharf.

Carlson digs into a plastic bag and pulls out handfuls of the dried kelp. Sarah Redmond is on hand to help add the seaweed. The two climb up to a small platform at the top of the tank.

"All this has to go in," instructs Carlson. "There's nothing pretty about it. Just grab and toss."

The brittle strips of seaweed disappear into the steam. In all, six pounds of dried kelp, the equivalent of 60 pounds of wet seaweed, go into this 200 gallon batch of scotch ale called Sea Belt. Carlson knew he'd get some iodine from the sugar kelp and some salt to counterbalance the Scottish peat-smoked malt in the beer. But he worried that if the kelp introduced too much of a polysaccharide called carrageenan that the beer would end up thick — like a milkshake. And no one is quite sure what the beer will taste like.

A few weeks later, the first batch is done and it's time for a taste test. Carlson wants an expert opinion. So he calls another brewer with a reputation for using off-the-wall ingredients, Sam Calagione, founder of Dogfish Head Craft Brewery in Milton, Del. Calagione agrees to taste Sea Belt, and Carlson ships him some cans. The men hook up via a conference call.

Calagione cracks open one of the cans as Carlson eagerly awaits his reaction.

"That's a nice beer," he says. "I get a lot of caramel notes early in the taste."

The beer is more malty than hoppy, earthy like the scotch ale that it's based on, but a bit more salty, thanks to the sugar kelp. Marshall Wharf Brewing Co. began pouring Sea Belt Scotch Ale on July 15.