Accessibility links
Not So Offal: Why Bone Soup, A 'Perfect Food,' Tastes So Meaty : The Salt After a taste of Singaporean sup tulang, we felt compelled to unpack what makes marrow so profoundly delicious. A biochemist says its unique combination of volatile compounds create a wallop of umami.

Not So Offal: Why Bone Soup, A 'Perfect Food,' Tastes So Meaty

Not So Offal: Why Bone Soup, A 'Perfect Food,' Tastes So Meaty 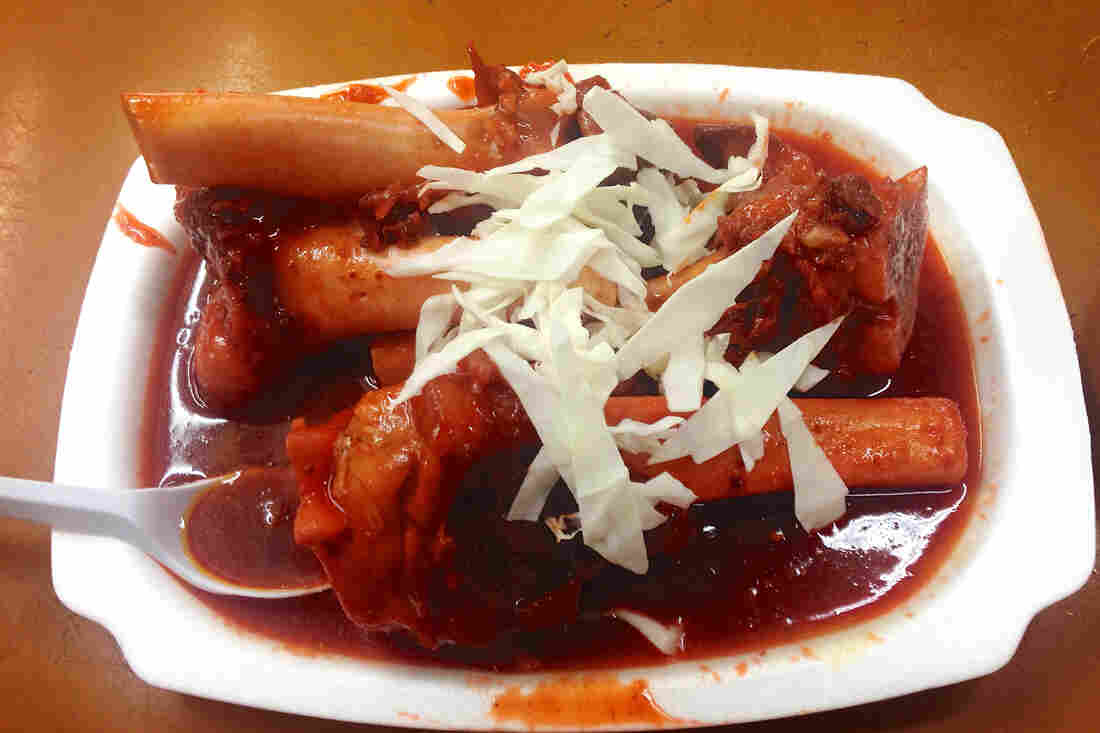 Sup tulang, as this dish is called in Singapore, is Malay for "bone soup." The fattiness of the marrow rounds out the chili, tomato, fennel, cumin and ginger. Konstantin Kakaes for NPR hide caption 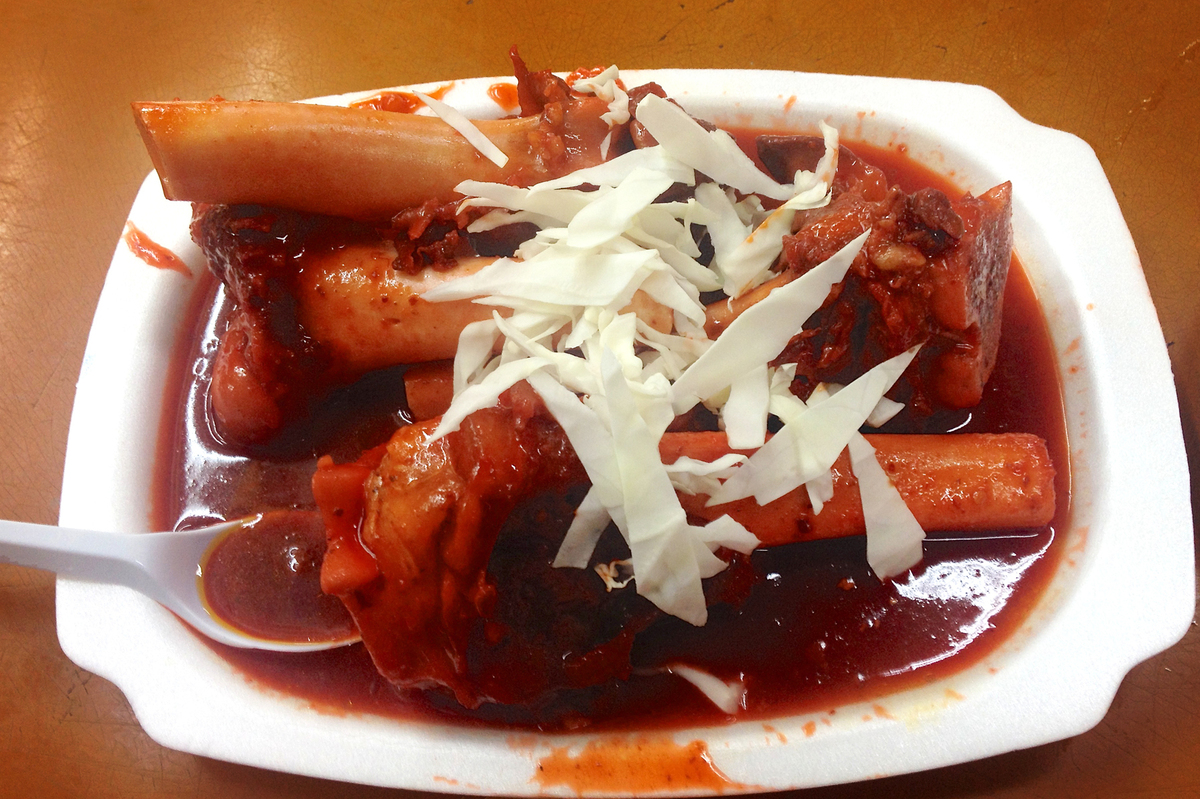 Sup tulang, as this dish is called in Singapore, is Malay for "bone soup." The fattiness of the marrow rounds out the chili, tomato, fennel, cumin and ginger.

I ate the best meat I've ever eaten through a straw.

When the Singaporean food stall proprietor who'd just served me a plate of bones first offered the straw, I refused. I didn't want to take any shortcuts as I worked the tastiest bits of marrow out from the skeletal hollows.

But a couple of minutes into my repast, my face smeared with the viscous broth the bones had come in, I couldn't face the thought of leaving some of this food unexploited. So I took the proffered straw, inserted it down into a bone cavity and inhaled.

It tasted like the first bite of an excellent steak, only more so. Unlike biting into a rib-eye, when that initial sensation gives way to something less exultant and chewier, the marrow lingered on the tongue. I felt as if I was mainlining glutamate, the substance responsible for umami.

These bones had been cooked for hours in a fluorescent red amalgam of tomato and chili. Sup tulang, as this dish is called in Singapore, is Malay for "bone soup." I ate it at Deen Tulang Specialist, one of a handful of stalls specializing in the dish in the Golden Mile Food Centre, one of many food courts, known as hawker centers, in Singapore.

Even as I eagerly gobbled at the bones in front of me, I turned a question over in my head: Just what was it that made the bones so good? 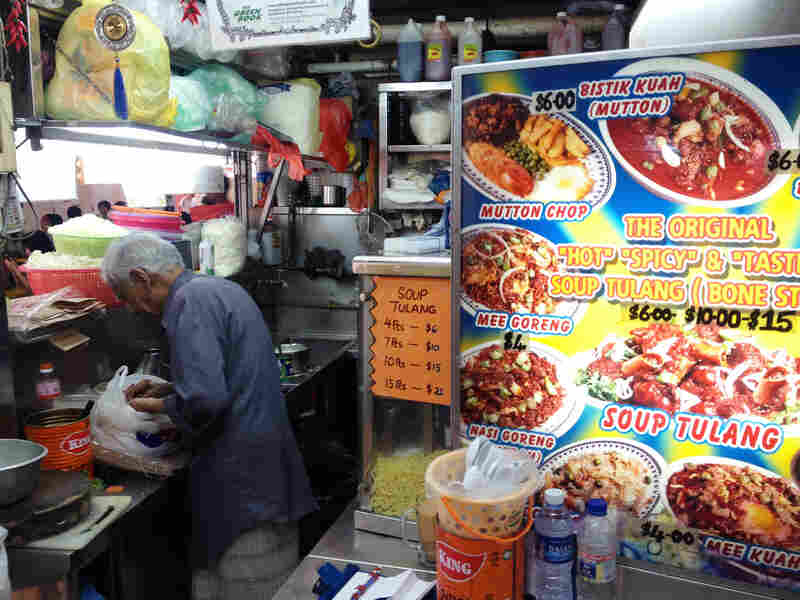 Sup tulang on the menu at the Deen Tulang Specialist stall in the Golden Mile Food Centre in Singapore. Konstantin Kakaes for NPR hide caption 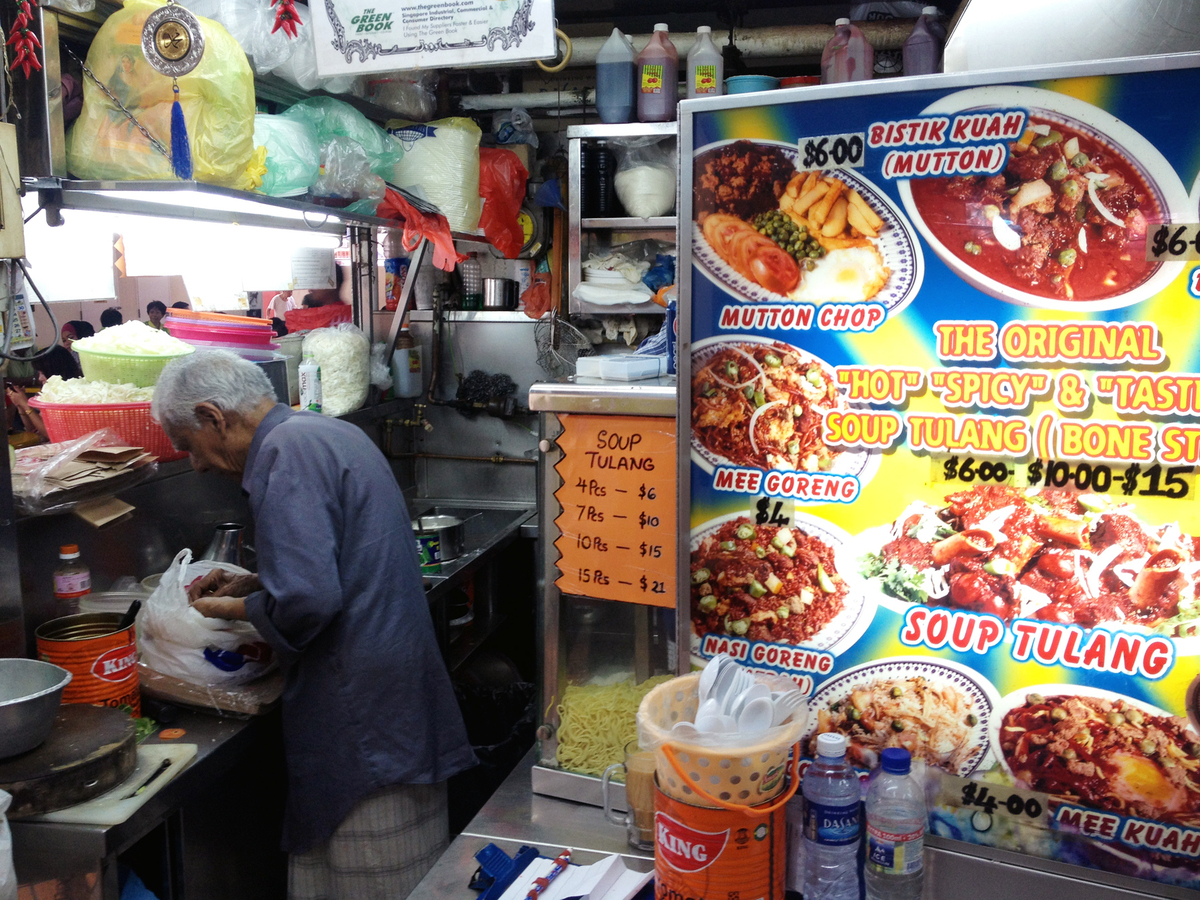 Sup tulang on the menu at the Deen Tulang Specialist stall in the Golden Mile Food Centre in Singapore.

Humans have been eating marrow for as long as we've been around. Indeed, some paleoanthropologists argue that eating marrow is part of what made us become human.

This school of thought is based largely on bones and stone tools from about 2 million years ago found in the Olduvai gorge, in present-day Tanzania. Fossils found there suggest that early humans scavenged carcasses already picked apart by other carnivores, and, using tools, broke open the bones and sucked out the marrow. Because marrow is very fatty, it is calorically dense, so the effort required to break open the bones was worth it.

In the West, marrow somehow evolved into an aristocratic food. In Offal: A Global History, Nina Edwards mentions a recipe used at Henry V's court "involving a beef marrow-stuffed steak rolled up like a pancake and sweetened with honey." Queen Victoria, she says, ate roasted bone marrow on a daily basis. In more recent times, Fergus Henderson, a chef in London who was in the forefront of "nose-to-tail" eating, popularized a recipe of roast beef bone marrow with parsley, served with toast.

These sorts of preparations are delicious, but they treat marrow as a delicate, rare thing, like caviar or foie gras. Yet marrow, today as it was in prehistoric times, is plentiful.

The sup tulang vendors in Singapore sell it by the bone — it works out to just over a U.S. dollar for each one. It's not a pricey food by Singaporean standards, though it is a delicacy.

A similar soup by the same name can be found in Malaysia, but the preparation I had at Deen's is uniquely Singaporean. It is a specialty of the mamak, or Indian Muslim, community in Singapore, who make up a small percentage of the population. Aside from the hawker center where I had it, there are a handful of other food stalls and restaurants in the city-state that serve it.

Compared with the marrow I'd eaten before, which was lightly spiced, the marrow in the tulang soup tasted more intense — the fattiness of the marrow rounded out the chili, tomato, fennel, cumin and ginger.

Marrow, because it is less widely consumed than flesh these days, hasn't been thoroughly studied by flavor scientists. There is one guy, however, who has his Ph.D. in bone marrow: Belayet Choudhury. His 2008 dissertation, "Volatile and non-volatile components of beef marrow bone stocks," is great reading.

Part of marrow's flavor, Choudhury explains, comes from the Maillard reaction in which sugars react with amino acids (this is the same thing that causes a nice crust to develop on steaks cooked over high heat).

Bone marrow, he writes, is almost 80 percent fat and only about 2.6 percent protein, with the rest being moisture. There are at least 12 different fatty acids present and about 20 amino acids.

When bone marrow is cooked, the large number of acids create even larger numbers of volatile compounds through a series of chemical reactions (the Maillard reaction and oxidation being the most important ones). The newly created volatile compounds interact with the nonvolatiles to bring about the marrow's rich taste.

Choudhury set out to find what compounds endow marrow not just with its pronounced umami but also with its "mouthfulness and taste continuity." He performed a series of experiments to single out exactly what was in the stock, finding a number of volatile compounds that hadn't previously been identified that, he wrote, provide "characteristic aroma and overall flavor."

Guy Crosby, an adjunct professor of nutrition at Harvard and the science editor of America's Test Kitchen, says that the many nucleotides present in bone marrow amplify the umami taste of glutamate by as much as 20 to 30 times.

Crosby reminded me that the function of bone marrow is to produce red blood cells. Because it is, in effect, a factory for the creation of cells, Crosby says, bone marrow is like an egg: "a perfect food. It's got everything in it needed to create and sustain life."

And it's true: Marrow tastes wholesome, in a way that other similarly rich foods, like butter, don't. It has some of everything you need. Just as cold, pure water from a mountain spring quenches thirst, this soup, the marrow tempered with spice and made resilient by tomato, seems to me as close as any substance can be to the tangible opposite of hunger.

I liked grappling with the bones, not immune to imagined kinship with cavemen who hunted beasts and gnawed on their prey. But my variety of carnivorous experience is distant from theirs. The fact is, once I gave in and sucked at the marrow through a straw, the implement children use to drink, I got at more of it. It was a reminder that I'm not that much less powerless than a toddler.

Konstantin Kakaes is a freelance writer in Washington, D.C., and the author of the e-book The Pioneer Detectives.