Accessibility links
Soylent DIYers Sell Their Own Versions Of The Powdered Food : The Salt Soylent, the offbeat meal replacement company, has built an online community of more than 18,000 users. But some are impatient to get their orders, so they're making and selling it themselves. 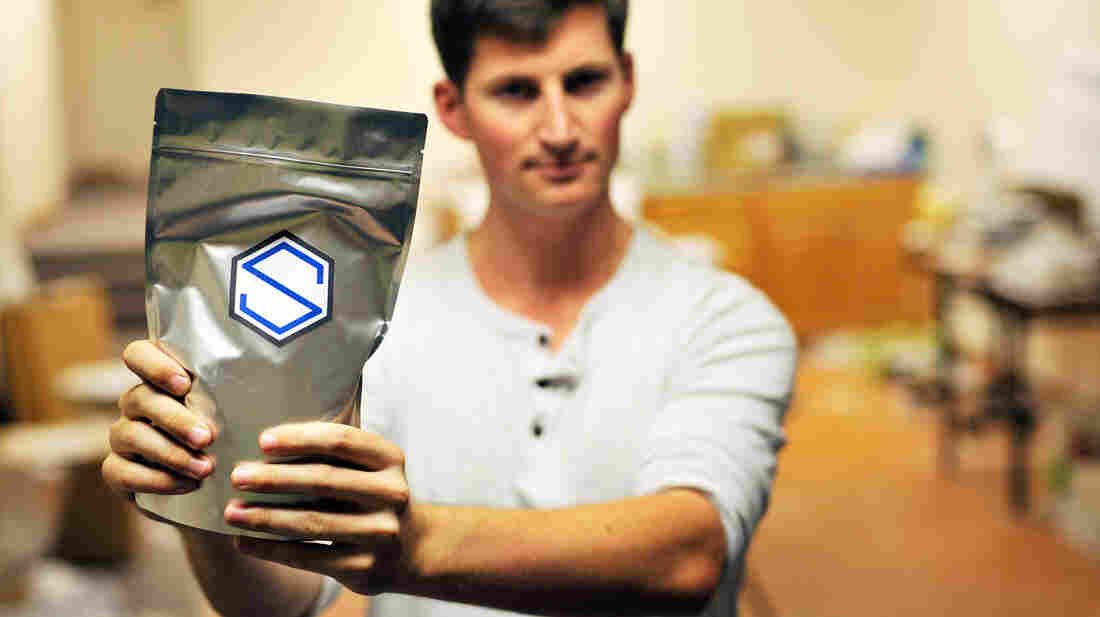 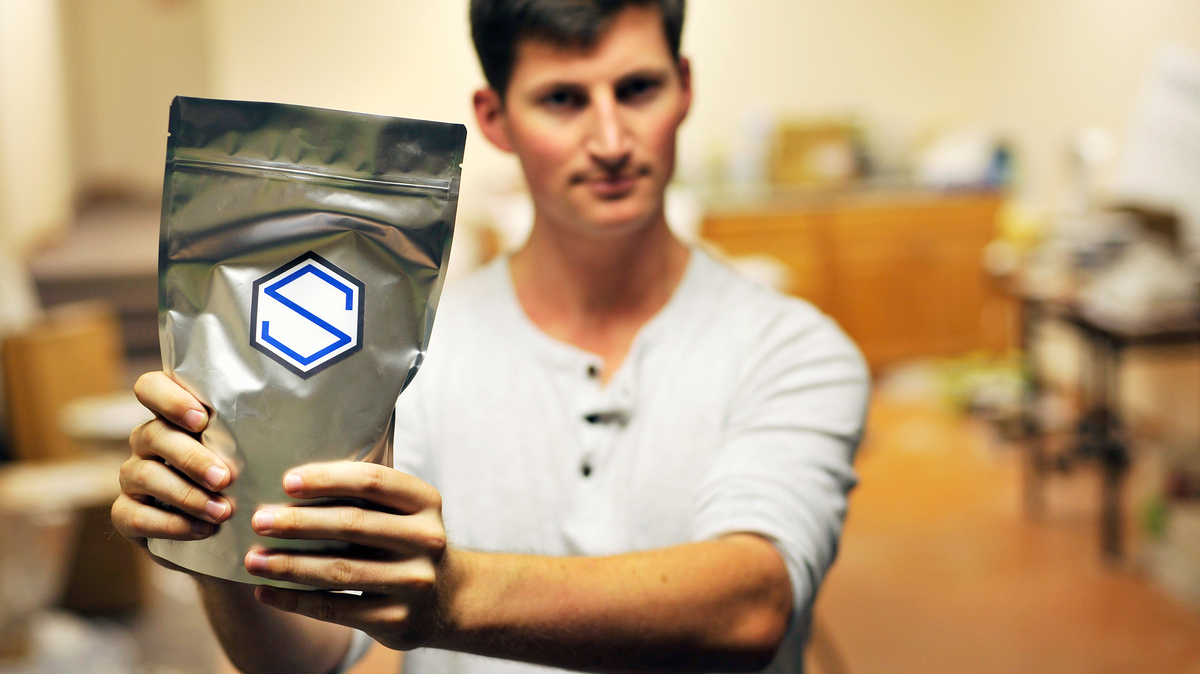 When Rob Rhinehart first created Soylent –– a powdered, synthetic food product made of industrial nutrients and oils –– he was a San Francisco techie trying to sustain himself cheaply without the inconveniences of grocery shopping, cooking or even eating.

His initial blog posts attracted the attention of Hacker News and members of the "lifehacking" community, who rallied around his DIY approach to concocting a nutritious food powder to live on. Rhinehart posted his recipe online and invited others to tinker with it. Some 2,400 customized versions, like "Chocolate Silk" and "Bachelorette Chow," tailored to various tastes and dietary needs, now exist.

While some nutrition scientists were skeptical of Rhinehart's claims that Soylent could be a healthful alternative to real food for everyone, his vibrant online following helped him raise over $3 million through crowdfunding to take it to market. Silicon Valley venture capitalists were also convinced that there was money to be made in Soylent and ponied up $1.5 million in funding.

Production began in late 2013, and the company began shipping orders to crowdfunders early this year. A week's supply of Soylent (21 meals) is $85 for a one-time purchase, and $70 for a monthly subscription. The company says new orders are rolling in to the tune of $10,000 a day.

But even as the company's early success suggests this synthetic food is here to stay, tension is building between the company and the enthusiasts online — now numbering 18,000 users from around the world — who helped get it off the ground. 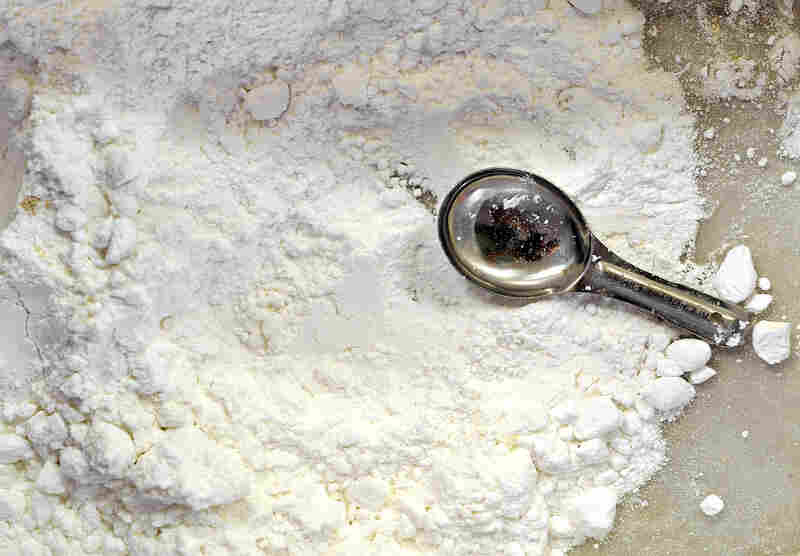 A tub of potassium gluconate on a production table at the Soylent corporate office in September 2013. Difficulty procuring large volumes of industrial nutrients like this one has slowed the company's ability to fill orders. Josh Edelson /AFP/Getty Images hide caption 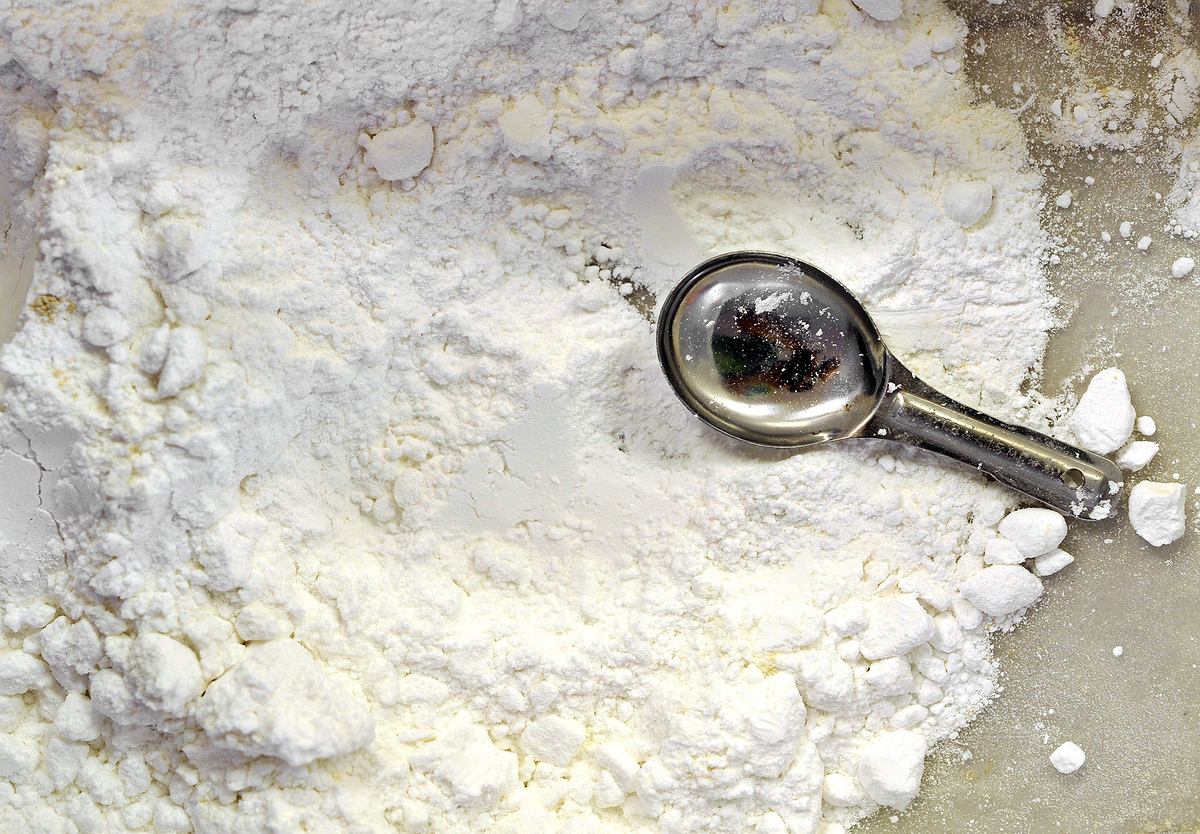 A tub of potassium gluconate on a production table at the Soylent corporate office in September 2013. Difficulty procuring large volumes of industrial nutrients like this one has slowed the company's ability to fill orders.

The company has struggled to procure large volumes of the industrial nutrients in the formula. And that's hindered its ability to fill orders on time.

Soylent's sluggish shipping has caused dismay among some of its backers, prompting some to propose buying and selling the community's versions instead. In a recent online "Fireside Chat" with Rhinehart, one member of the company's online forum noted that some "DIYers ... have started selling our DIY soylent to impatient Soylent backers."

They then asked how Rhinehart would feel if community members sold blends under a different name like "Schmoylent."

Rhinehart discouraged it, replying, "I won't stop you from selling 'Schmoylent' on legal grounds, but I must caution you it is unwise to enter [into] direct competition with us."

Soylent isn't patented, and the recipe is still public. But the company's DIY wiki notes that Soylent refers to the trademarked product –– Rhinehart alone holds the trademark –– made by Soylent Corp., while "soylent" refers to any other version.

"People confuse do-it-yourself recipes with Soylent, and we're ... [grappling] with that," she says. "We don't want people to be making their own stuff and shipping it without understanding that they need to be licensed to do that. As the organizers of this community we have a certain responsibility."

Laskey says the differences between the community's custom blends and the company's are Soylent's "unique method of combining its ingredients and rigorous manufacturing process."

Still, Laskey says the company welcomes competition, adding, "We are more than happy to lead the way for this whole ecosystem to develop. We think it's awesome when you have competition that breeds innovation and brings cost down."

Some forum members who've already received their orders are getting creative with the product. Jonathan van Clute created the website IAmSoylent.com to document his and his partner's adventures with the beverage after receiving his first shipment of the official product in April.

And despite the fact that Soylent is invented as a substitute for real food, van Clute says he has taken to experimenting with Soylent baked goods. He posted a video of peanut butter and chocolate chip cookies to his YouTube account; other Soylent users have come up with recipes for oatmeal cookies and brownies.

Editor's Note, 4:32 p.m.: After this story was published, Soylent contacted NPR to clarify that the company raised over $3 million in crowdfunding between June 2013 and May 2014. Previously, we stated that the company had raised an initial $750,000 through crowdfunding

Alexander McCall is the social media intern at NPR. You can follow him @awmccall.