Accessibility links
Some Food Companies Are Quietly Dumping GMO Ingredients : The Salt Many mainstream companies are creating GMO-free foods, but they're not publicizing the changes. Meanwhile, some are also fighting state initiatives that would require them to label GMOs ingredients. 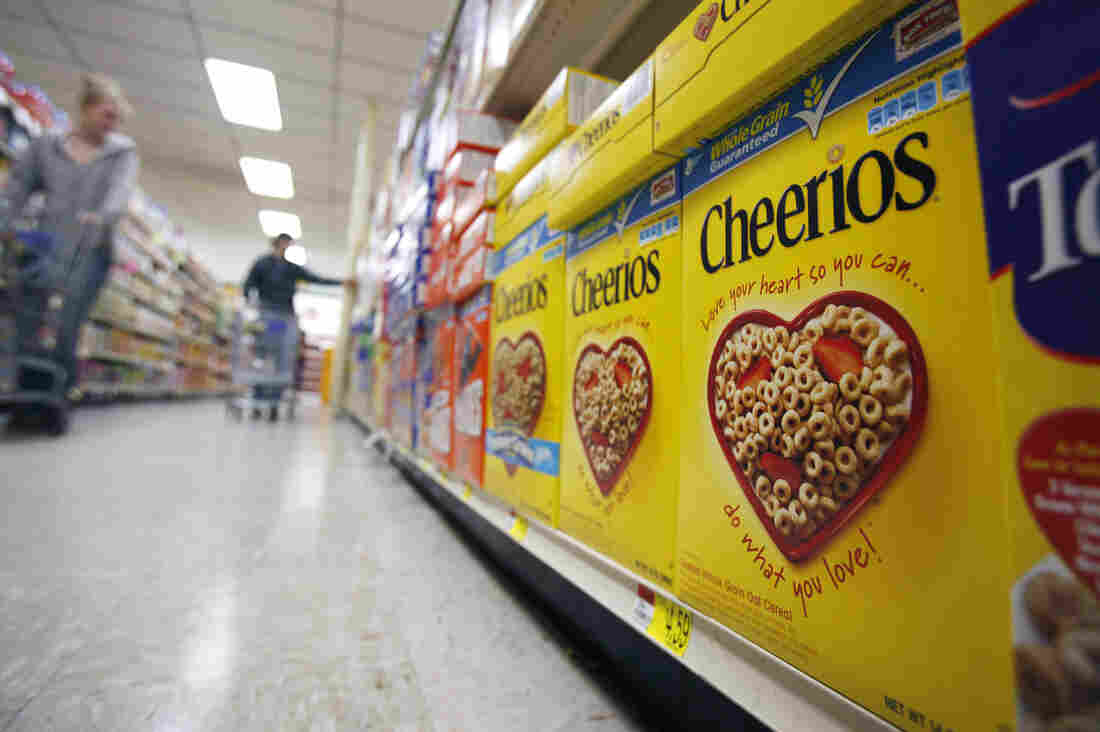 General Mills' original Cheerios are now GMO-free. But you won't find a label on the box highlighting the change. David Duprey/AP hide caption 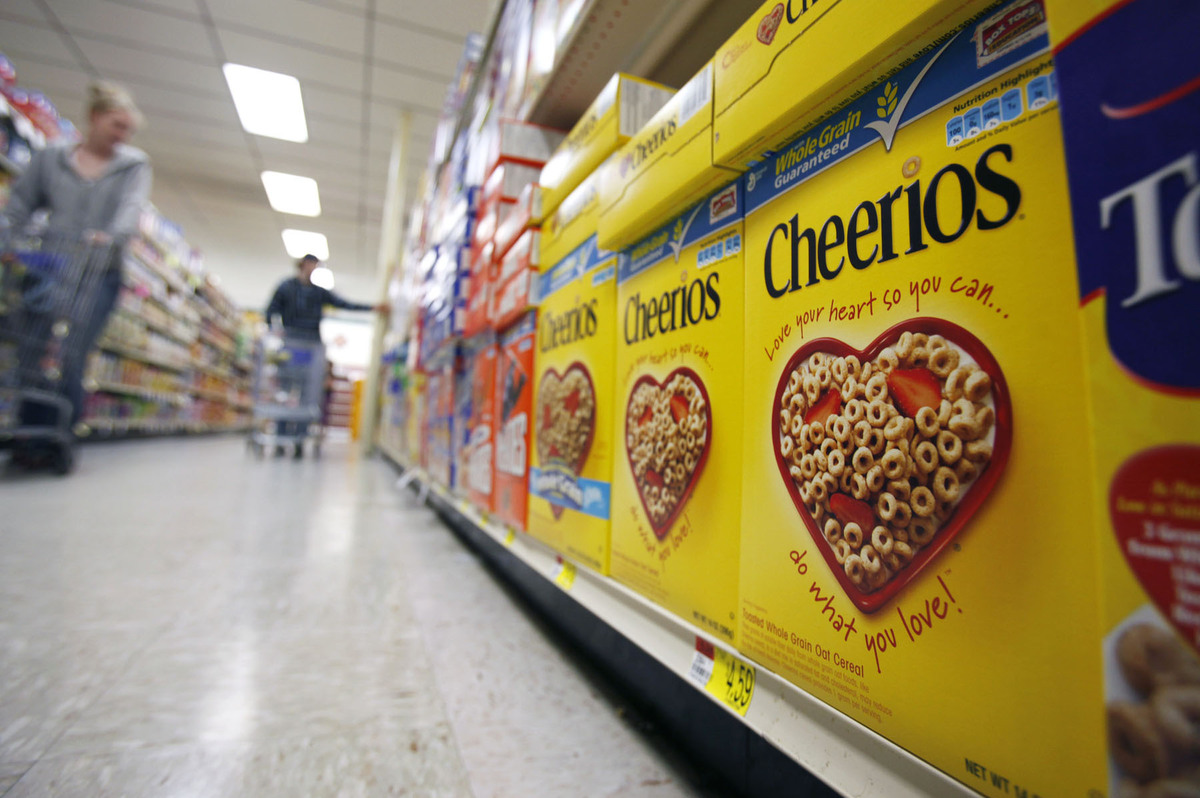 General Mills' original Cheerios are now GMO-free. But you won't find a label on the box highlighting the change.

A tour of the Ben & Jerry's factory in Waterbury, Vt., includes a stop at the "Flavor Graveyard," where ice cream combinations that didn't make the cut are put to rest under the shade of big trees.

One recently deceased flavor has yet to be memorialized there: Coffee Heath Bar Crunch, one of the company's best-sellers. Ben & Jerry's CEO Jostein Solheim says the company had to remove the key ingredient, Heath bars made by Hershey, and rework the flavor. Its replacement is called Coffee Toffee Bar Crunch. (Some fans have blasted the company in online forums, claiming it doesn't taste as good.)

The reason for the change? Hershey makes Heath bars with genetically engineered ingredients, and Ben & Jerry's has made a pledge to remove all GMO ingredients from its ice cream.

The company has taken a vocal stand in recent years in support of states looking at legislation that would require manufacturers to disclose food that is made with genetic engineering. And Vermont recently passed a law that will require labeling starting in 2015. Ben & Jerry's co-founder Jerry Greenfield recently launched a campaign to help fill the coffers of Vermont's crowd-sourced defense fund set up to combat lawsuits over its labeling law.

The news that Ben & Jerry's is taking a stand on a controversial issue is no surprise; it's part of the company's calling card. But some other mainstream companies are carefully — and much more quietly — calibrating their non-GMO strategies.

General Mills' original plain Cheerios are now GMO-free, but the only announcement was in a company blog post in January. And you won't see any label on the box highlighting the change. Grape Nuts, another cereal aisle staple, made by Post, is also non-GMO. And Target has about 80 of its own brand items certified GMO-free.

Megan Westgate runs the Non-GMO Project, which acts as an independent third-party verifier of GMO-free products, including Target's. She says her organization knows about "a lot of exciting cool things that are happening that for whatever strategic reasons get kept pretty quiet."

The Non-GMO Project has certified more than 20,000 products since it launched in 2007, and Westgate says this is one of the fastest growing sectors of the natural food industry, representing $6 billion in annual sales. But just because they're testing the water doesn't mean most mainstream companies are ready to start publicizing their changes.

Nathan Hendricks, an agricultural economist at Kansas State University, says big food producers are trying to gauge what direction consumers are headed in. "Ultimately," he says, "these big companies aren't just friends with Monsanto or something. They want to make a profit, and they want to be able to do what's going to make them money." So they'd better have a product line in the works if consumer sentiment starts to shift more heavily toward GMO-free food.

But even as they create GMO-free products, many of these corporations are fighting state initiatives that would require them to give consumers more information about their ingredients.

They often fight those battles through the powerful Grocery Manufacturers Association, or GMA, a trade group with hundreds of members. It has just filed suit against Vermont over the state's GMO labeling law.

Even Ben & Jerry's, so vocal in its anti-GMO stance, has a conflict, of sorts. It may have eliminated GMOs, but it's still owned by Unilever, which put a lot of money toward fighting labeling legislation in California and belongs to the GMA. That might make things sticky for Ben & Jerry's CEO Solheim.

But he equivocates. "You know," he shrugs, "in big companies a lot of things happen behind closed doors. I think we'll leave that conversation behind closed doors." But Solheim says a unique agreement between the ice cream maker and Unilever allows Ben & Jerry's to continue its social mission independent of its parent's choices.

One reason these large companies might be quietly working to make GMO-free food now is because finding ingredients can be a major challenge. More than 90 percent of all the soybeans and corn grown in the U.S. are genetically engineered. Most of those GMO crops go to producers of eggs, milk and meat who feed their animals with them, but GMO soy oil and cornstarch are used in a lot of food manufacturing, too.

To ensure non-GMO ingredients, the supply chain has to remain separate and pristine. Crops need to be grown far enough away from genetically engineered seeds to prevent cross-contamination. Harvesting equipment needs to be either used only for non-GMO crops or cleaned extensively before switching. The same is true for processing and manufacturing facilities and transport receptacles like shipping containers.

That's why Westgate says a natural foods brand like Kashi, owned by Kellogg's, is transitioning more slowly than many fans would like. She points out that Kashi told consumers it would take a couple of years to switch over all of its ingredients. It's a matter of changing contracts with growers, finding farmland where non-GMOs can be grown successfully, and reworking recipes so the flavors that customers have grown used to aren't drastically changed, like what has happened with Ben & Jerry's new toffee.

Right now, non-GMO food fetches a premium. Purdue University agricultural economist Chris Hurt says that premium is likely to come down if this part of the agricultural sector gains more traction and an efficiency of scale can kick in.

Ultimately, the consumer is king. And the question of whether or not consumers will want non-GMO products is still up in the air.

At the Ben & Jerry's factory in Vermont, most tourists seem more interested in getting their free samples than hearing about the brand's stand on genetic engineering. Still, manufacturers are clearly wondering what might happen if more states enact labeling laws and if consumer sentiment begins to shift. So they're hedging their bets: fighting state-by-state labeling initiatives, but quietly introducing their own GMO-free products in the meantime.