Accessibility links
Can Finishing A Big Bowl Of Ramen Make Dreams Come True? : The Salt At his ramen shop in Cambridge, Mass., chef Tsuyoshi Nishioka wants customers to follow their dreams. His philosophy? If you can finish a bowl of his ramen, you can accomplish anything in life. 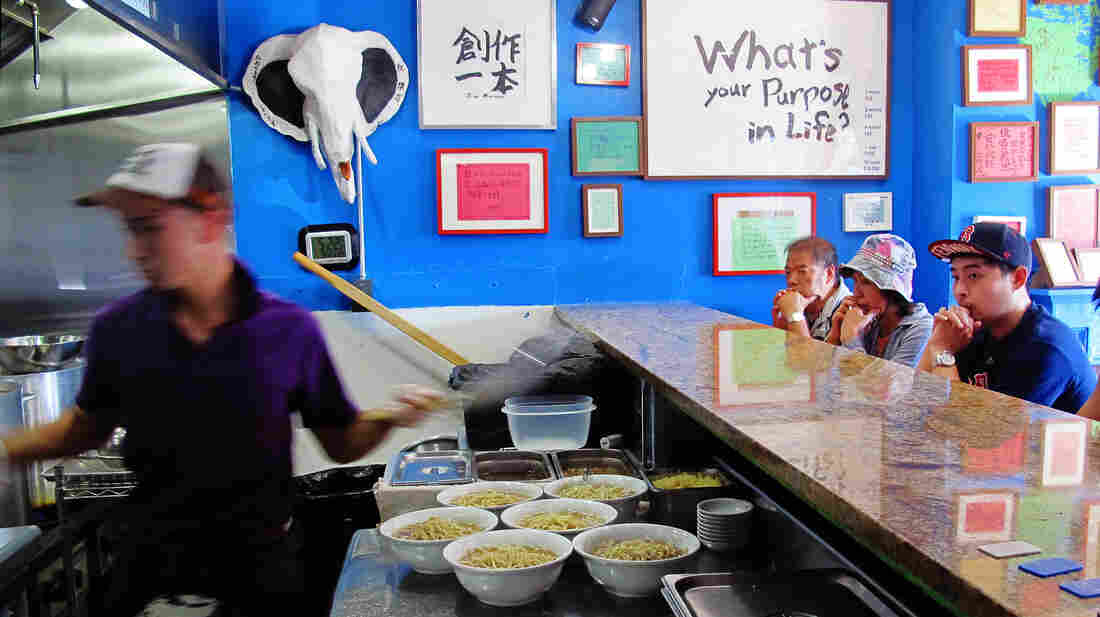 At Yume Wo Katare, eating ramen is treated as a path to personal fulfillment. Andrea Shea for WBUR hide caption 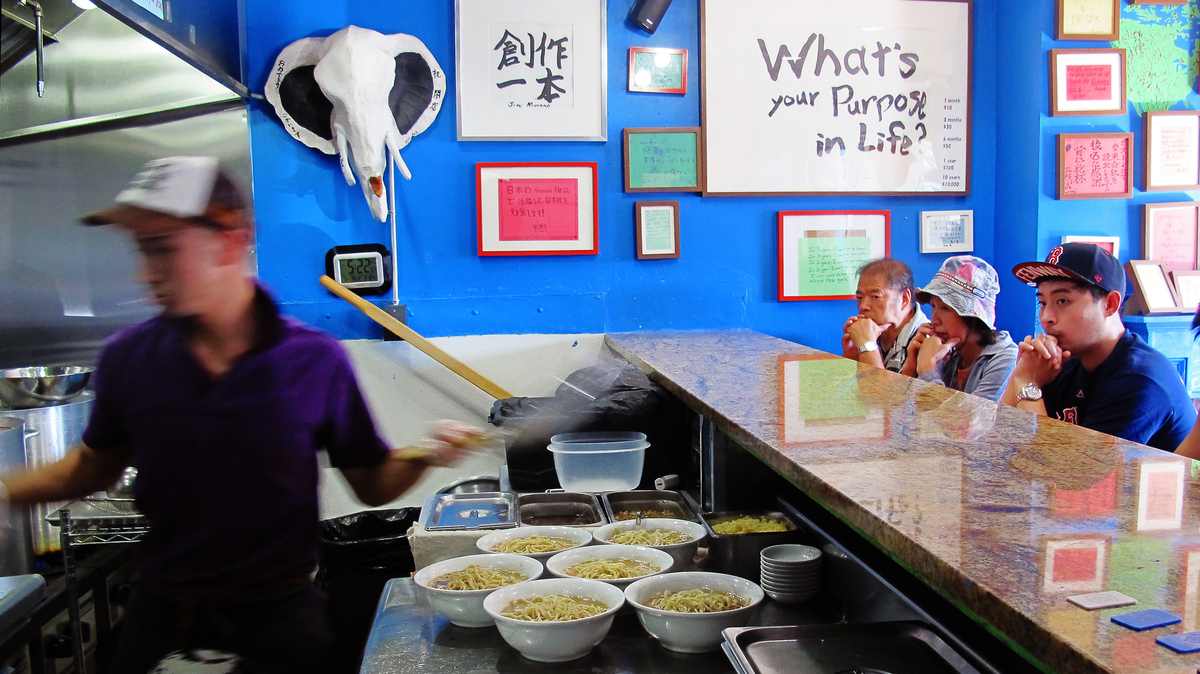 At Yume Wo Katare, eating ramen is treated as a path to personal fulfillment.

You can find ramen, the Japanese noodle soup that's meant to be slurped, almost anywhere in the U.S. these days. Ramen shops continue to pop up, and you can find renditions on the menus of restaurants and gastropubs.

But there's a truly funky noodle spot in Cambridge called Yume Wo Katare that serves more than just ramen.

There aren't many restaurants where you get praised by everyone around you for clearing your plate or bowl. But that's exactly what happens at Yume Wo Katare.

"Everyone, he did a good job!"

You'll hear that again and again over the course of a meal in the cozy but loud space. 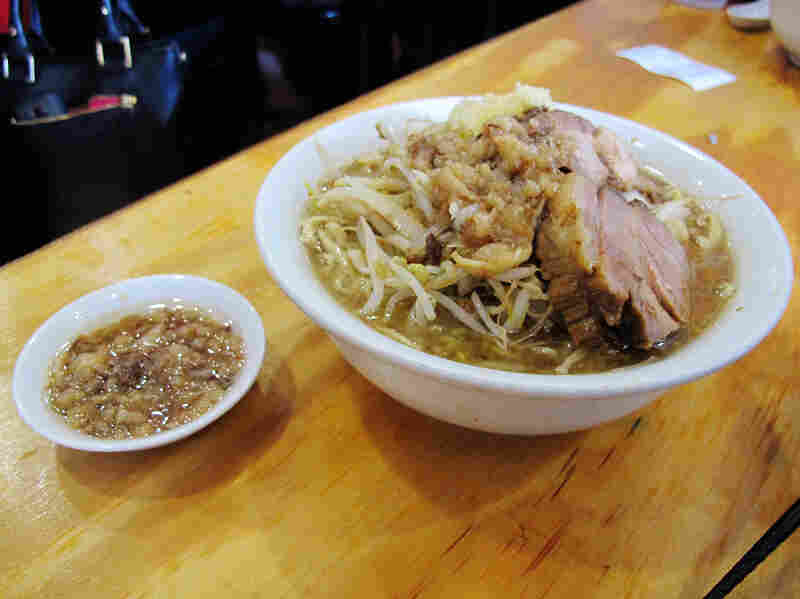 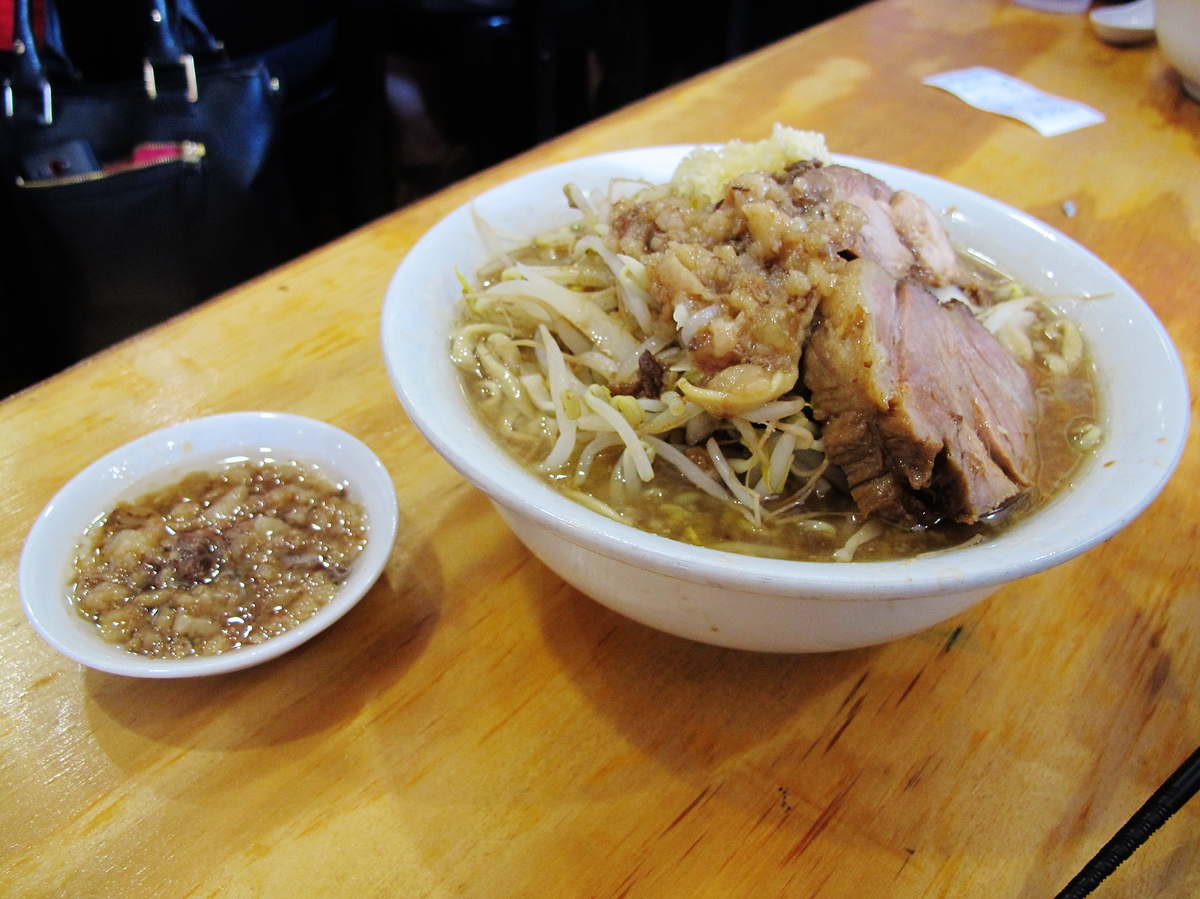 Owner and ramen master Tsuyoshi Nishioka yells the traditional welcome "Irasshaimase!" — more or less "come in" — at customers from behind the long counter that separates his open kitchen and the shop's 18-seat dining room. Sometimes people wait more than an hour outside on the sidewalk in all temperatures to participate in this novel but highly regimented ramen experience.

"Thank you for coming to Yume Wo Katare, which means 'talk about your dreams' in Japanese," Yamamoto says. "Whatever dreams you may have, how we can help you with that is the ramen he's preparing right now. So if you can finish this high bowl of ramen, you can do anything in life. That's the concept. OK, good luck with your ramen, and thank you very much!"

Eating ramen here is seen as a path to personal fulfillment. Some customers write their dreams down and hang them on the restaurant's walls. One reads, "skydiving." Another, "one month without sugar." Most are written in Japanese.

"Each person understands another meaning [of the philosophy]," 34-year-old ramen chef Nishioka says. "So it's good for our restaurant."

Nishioka opened Yume Wo Katare in November 2012. Since then, he's been encouraging people to reclaim abandoned dreams and nurture new ones.

Like a ramen guru, Nishioka believes dreams require fortitude and deep concentration — just like eating a heaping pile of his homemade noodles does.

"When ramen is coming, grab chopsticks and don't stop until you finish eating the bowl," he says. 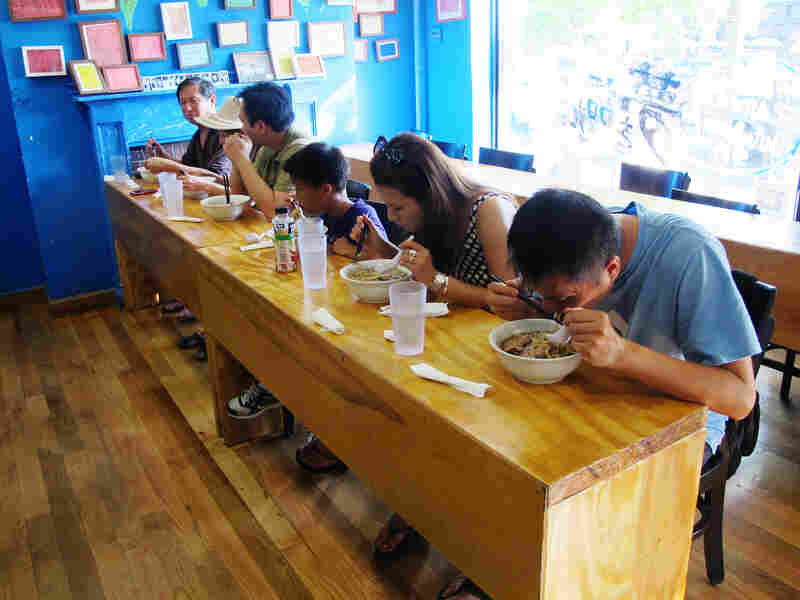 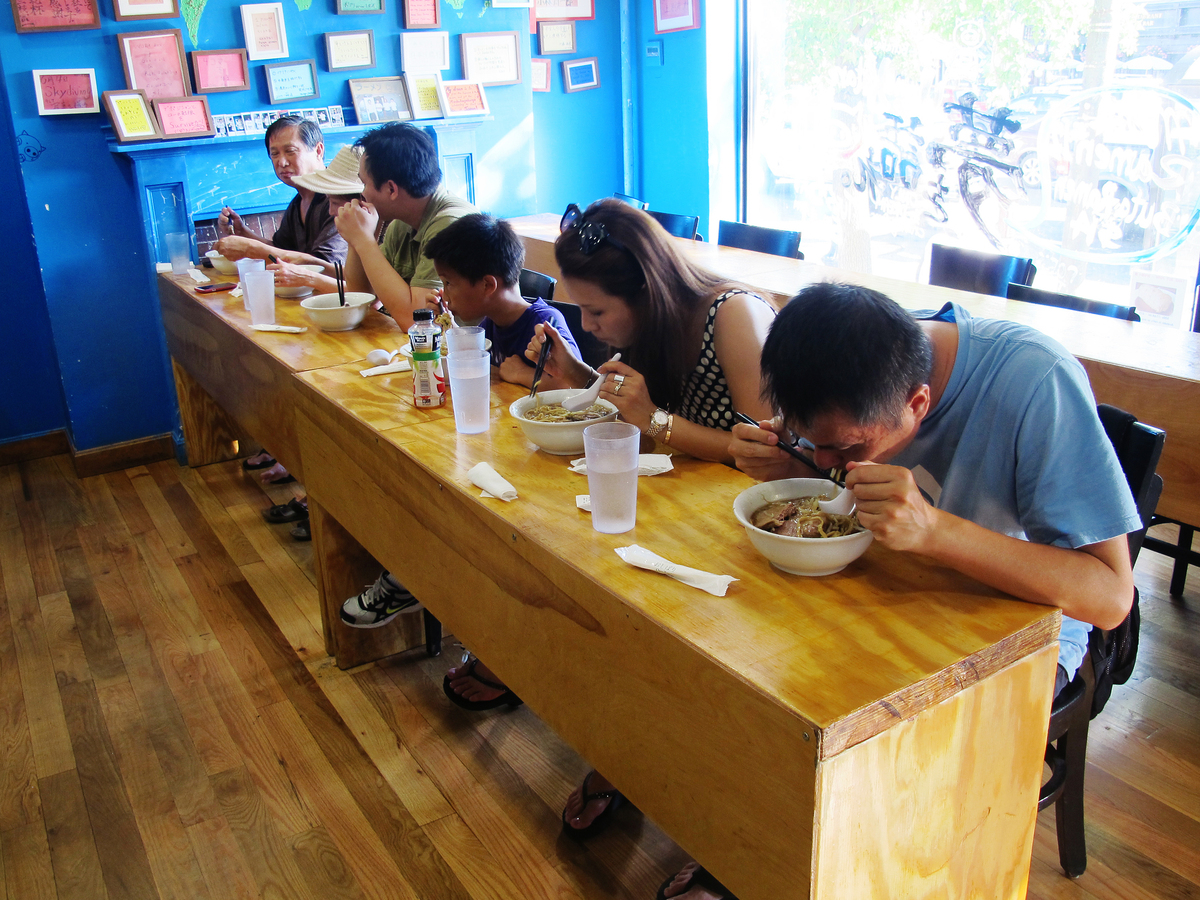 At this shop, finishing the huge, rich bowls of ramen requires fortitude and deep concentration.

If you finish everything Nishioka loaded into your steaming bowl, the room erupts in cheers of, "Everybody, we have a perfect!" along with claps and giggles. (I managed this feat on my third time eating at Yume Wo Katare, and I have doubts I'll ever be able to do it again.)

If you eat your noodles but can't drink every drop of the rich broth you earn a different cheer: "Everyone, he did a good job!"

Those with smaller appetites are met with an "almost" or "next time." The goal, chef Nishioka says, is to push people beyond what they think they're capable of.

"It's an interactive kind of experience, even when you're going alone," explains customer Chris Shipley. "So yeah, I've waited in lines over an hour."

Shipley has eaten here once a month since moving to the area in September. The ramen is different and delicious, he says, adding that he doesn't shoot for a "perfect" anymore.

"I've decided to get down to a 'good job,' because sometimes 'perfect' is a little too much. It's really greasy," he says. "That broth has a lot of fat in it."

The fatty broth and chewy noodles come with thick, tender slices of rolled pork belly that lay on a bed of bean sprouts, bok choy and minced garlic. 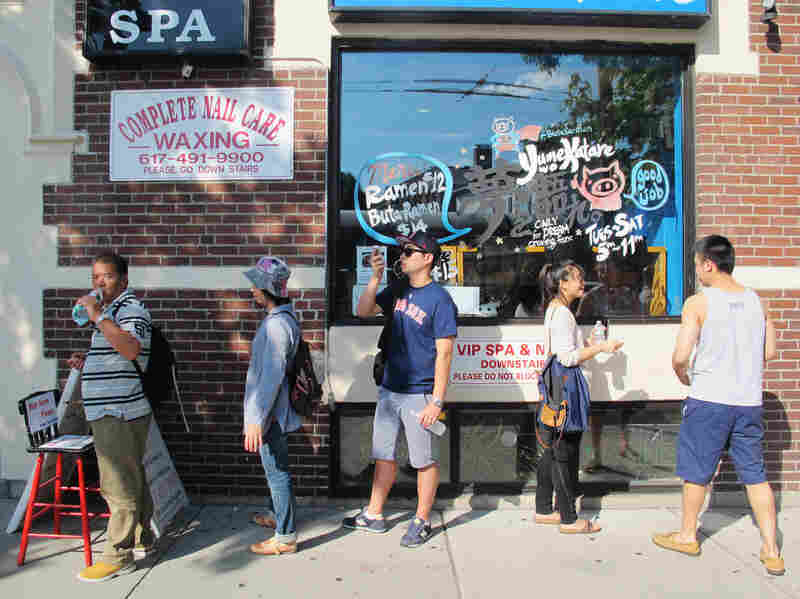 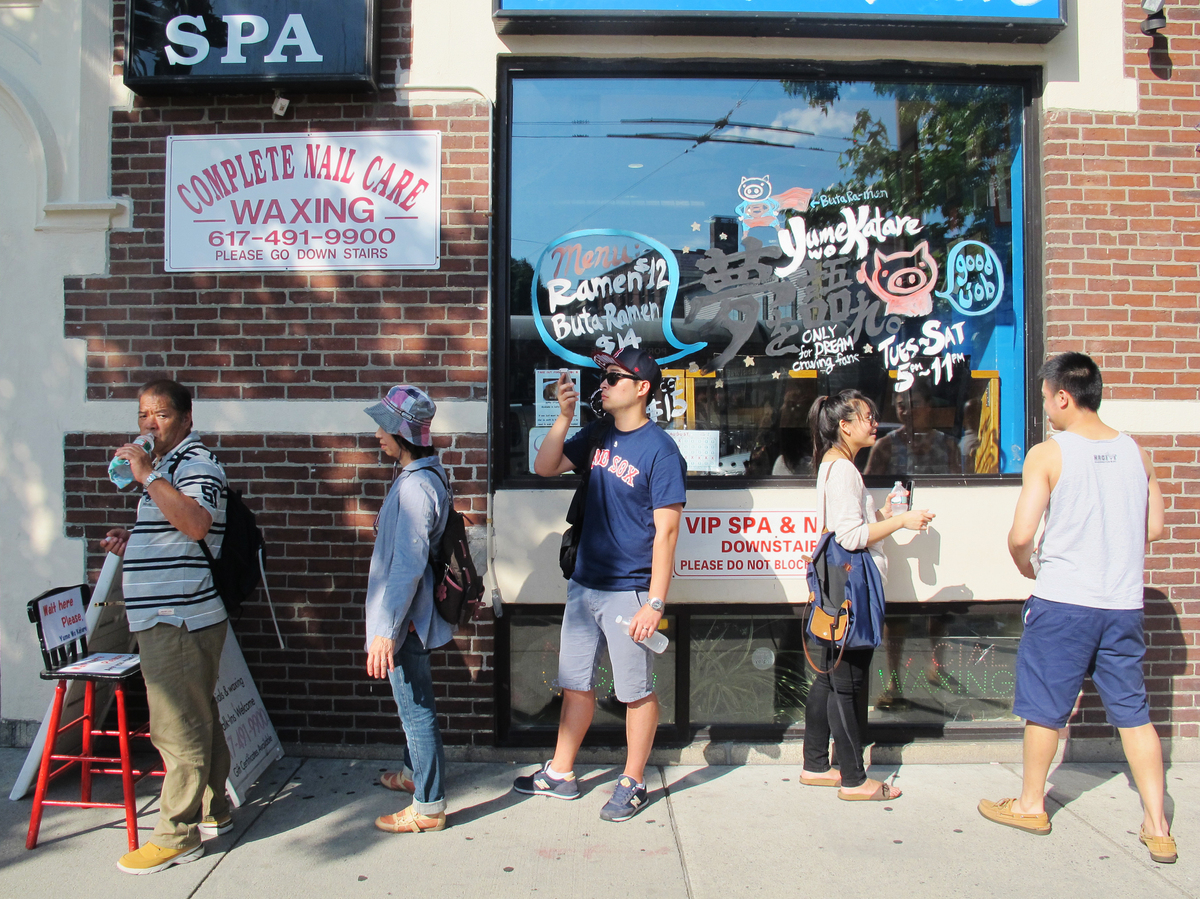 This style is called jiro ramen, and it's rare in the U.S. Nishioka learned to make it at a famous Japanese restaurant chain called Ramen Jiro. He opened five of his own shops — in Kobe, Kyoto and Osaka — then sold them to his managers before searching for a space in the U.S.

Over the past few months, owner Nishioka and his friend Ryo Takahashi have started hosting workshops at the restaurant on Monday night to help their peers develop strategies.

"There's a lot of Japanese population here — especially students who haven't really figured out their life yet," Takahashi explains. "So we're trying to help to talk about what's your plan, and you know, what's your dream, and what do you want to do in the future?"

Twenty-year-old Satomi Yoshida tries to attend every Monday. She's a student at Bunker Hill Community College and says she first came to Yume to talk about her dreams. The ramen came second, but she added, "Eating ramen here, always I feel some positive power."

And she compares finishing a bowl of ramen to running a marathon.

"It's just me and the ramen," Yoshida says with a smile.

Nishioka hopes more people will drop by the weekly Monday night meetings. The restaurant is closed that night, but business is brisk most others. It's so good that Nishioka can shut down the shop every few months to go back to Japan.

When asked about his own future, Nishioka muses that maybe, just maybe, he won't even serve ramen — as long as he can keep encouraging other people to dream on.