Accessibility links
Could Specialty Cocoa Be Haiti's Golden Ticket To Prosperity? : The Salt Cacao "supertrees" in the north produce more pods with more seeds than ordinary cacao trees. A USAID project hopes to capitalize on that so Haiti can gain a foothold in the high-end chocolate market.

Could Specialty Cocoa Be Haiti's Golden Ticket To Prosperity?

Could Specialty Cocoa Be Haiti's Golden Ticket To Prosperity? 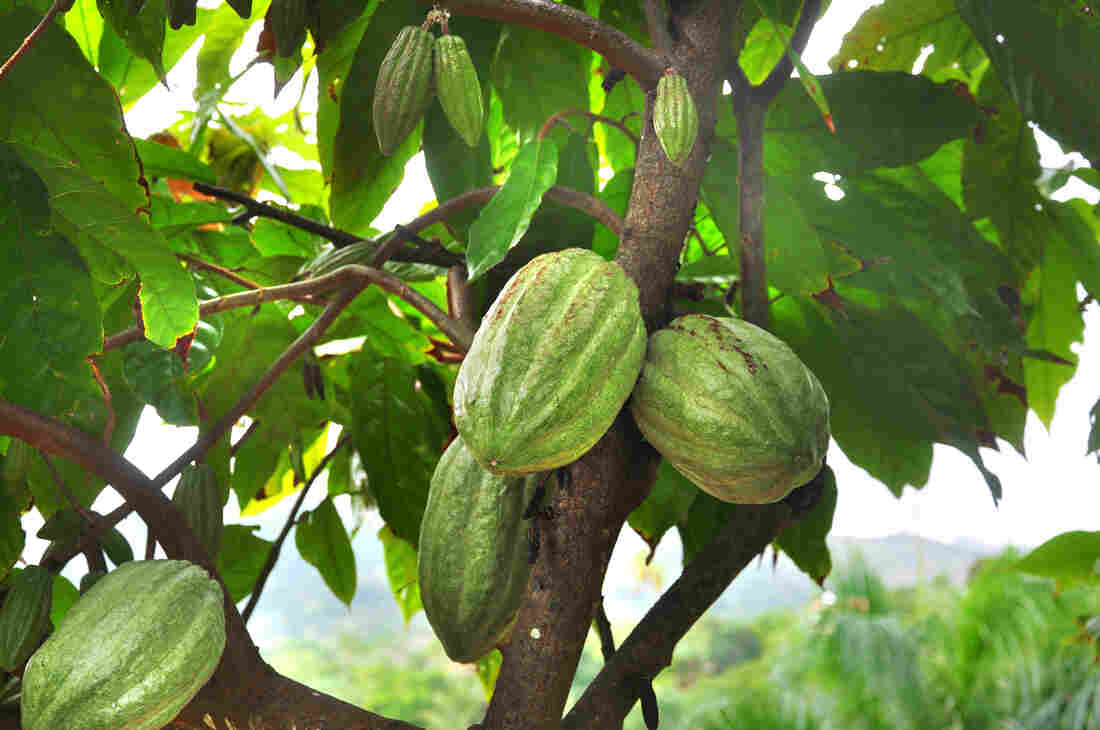 Maman Pye cacao, a Haitian supertree, can produce 20 times as many cacao pods as ordinary trees, and the pods themselves are denser with cacao seeds than ordinary pods. Shutterstock hide caption 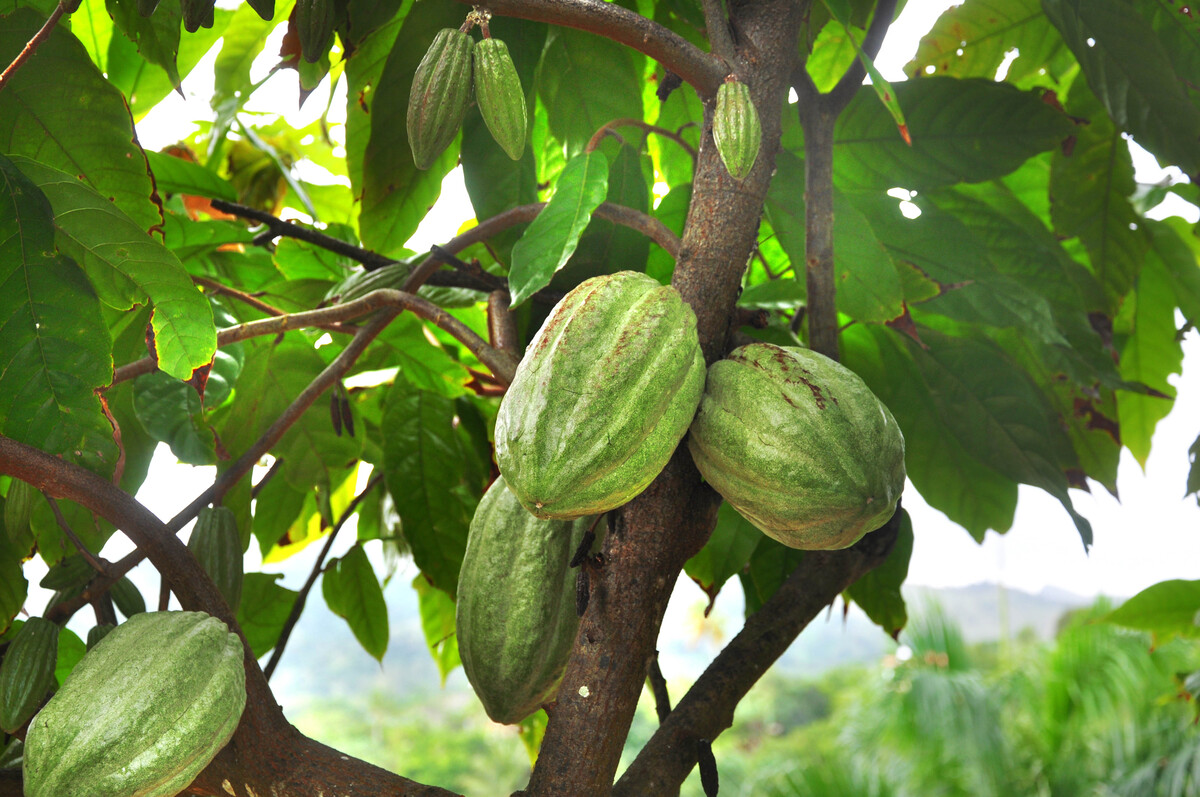 Maman Pye cacao, a Haitian supertree, can produce 20 times as many cacao pods as ordinary trees, and the pods themselves are denser with cacao seeds than ordinary pods.

In Robillard, a tiny hamlet deep in the Haitian hinterland, Valmir Mamonvil is standing next to a would-be national hero: Maman Pye cacao, which in Haitian Creole means "mother cacao tree." His father planted it 30 years ago, but for Mamonvil, the tree is more than a family heirloom. It could be his kids' ticket to prosperity — and his country's chance to cash in on surging chocolate demand around the world.

Maman Pye is one of about 600 "supertrees" scattered throughout northern Haiti. Supertrees are not unique to Haiti. They don't even seem remarkable, until you look closer. These mamas can produce 20 times as many cacao pods as ordinary trees, and the pods themselves are denser with cacao seeds than ordinary pods. What's more, their fruitful ways are easily spread, largely by grafting.

All of which makes Maman Pye and its sisters key to realizing a long-cherished dream in Haiti: to rev up cacao production and gain a foothold in the high-end global chocolate market, says Philippe Mathieu, a chocolate lover and former agriculture minister who now directs USAID's cacao program. "We are looking to find a niche market, because Haiti can provide chocolate for the connoisseur," he says.

In some ways, it's a modest goal. Beset by historically low yields and poor farm-to-market infrastructure, Haiti doesn't yet expect to become a commodity player or for cacao to single-handedly transform the economy. Instead, Mathieu and others hope that cacao supertrees will improve standards of living in the long-struggling country, which has a per capita gross national income of less than $800 a year.

There's certainly plenty of room for a niche producer. The World Cocoa Foundation says global demand for Theobroma cacao, literally "food of the gods," is rising 3.1 percent a year. The reason? Citizens of emerging economies are becoming chocoholics. Hershey, for instance, predicts China will be its second-largest market (after the United States) by 2017. Cacao supply, however, is notoriously erratic. Crops in West Africa, which produces 70 percent of the world's cacao, are vulnerable to extreme weather, pests and disease.

Specialists in big chocolate companies came here and loved our cocoa so much, they said they would buy everything we had — 10 times more, 100 times more. But we didn't have it.

Haiti wouldn't need huge plantations to compete: Unlike large, industrialized crops, 90 percent of the world's cocoa comes from small, family-run farms like the ones Haiti has.

Those are sweet macroeconomic fundamentals, but how does the Haitian stuff taste? Singular, according to the experts: sweetly seductive rather than bitter, even in its natural form. Haitians swear by their chokola, richened with cinnamon, vanilla and nutmeg. Mathieu, who has written copiously about Haitian cocoa, says it's "unbeatable."

"Specialists in big chocolate companies came here and loved our cocoa so much, they said they would buy everything we had — 10 times more, 100 times more," he says. "But we didn't have it. The quantity we produce is not enough right now."

Haiti's cacao results from the remarkable union of Criollo and Trinitario, varieties championed throughout the world. They arrived on Hispaniola, the island Haiti shares with the Dominican Republic, with French and Spanish conquerors in the mid-16th century. For a while during the colonial era, cacao was exported in abundance by sharp-eyed Europeans looking to make their fortunes.

Their legacy of quality cocoa may mean riches for Haitians 500 years on. Right now, the low yields and weak infrastructure render Haitian chocolate almost wholly absent from groceries and confectioners worldwide. Connoisseurs, including those from Paris' prestigious Salon du Chocolat, wish it weren't.

Part of USAID's $88 million Feed the Future North program, the cacao project aims to double yields within a decade, so that by 2024, Haiti will produce 400 kilograms per hectare. That would bring Haitian cacao production up to the world average. While USAID has had some success with cacao yields in the past, it now sees the supertrees as critical to taking Haiti's cacao even further.

In Mamonvil's garden, grafts from Maman Pye have been applied to low branches of ordinary cocoa trees. When they take, the grafts will transfer Maman Pye's fruitful genes to younger trees. The younger trees will mature more quickly than trees grown from seedlings, producing pods within just three years — and many more pods than their ordinary brethren.

The program isn't relying wholly on supertrees and grafts, though. It also teaches farmers the basics: how to prune correctly, protect delicate seedlings using big-leaved banana plants for shade, share tips and tricks at farm field schools, and graft from supertrees. Nearly 2 million seedlings will also be planted.

If the program hits its targets, Haiti will produce some 10,000 tons of cacao per year. It'll be a tiny bit of the total worldwide output, which is currently 10 million tons, but enough to gain a foothold as a niche producer of luxury chocolate. There's no guarantee it will succeed, of course; little is easy in Haiti. But if Haiti can produce enough of its specialty cocoa, then rising demand and chocolate prices would, in theory, do the rest.

Back in his garden in Robillard, Mamonvil says he is hopeful for the first time in years. "One of my sons has just finished studying agronomy. He'll help, of course, but it's funny," he says, "all my six children tell me they will always return, no matter what they do, to take care of the cocoa trees."