Accessibility links
Want To Reduce Your Carbon Footprint? Choose Mackerel Over Shrimp : The Salt Sardines and other small, oily fish are some of the most nutritious in the sea. Now there's another reason to eat them: Fishermen use a lot less fuel to catch them than many other kinds of seafood.

Want To Reduce Your Carbon Footprint? Choose Mackerel Over Shrimp

Want To Reduce Your Carbon Footprint? Choose Mackerel Over Shrimp 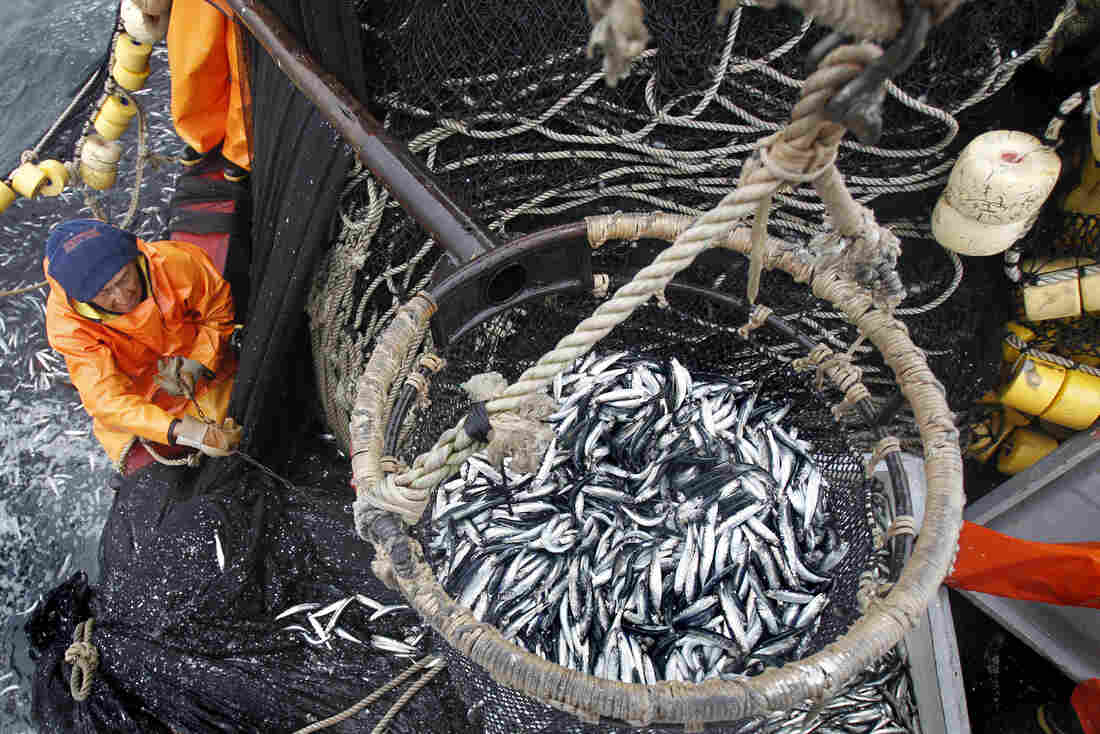 A fisherman pulls a basket filled with anchovies aboard a fishing boat off of Peru's northern port of Chimbote, in 2012. Peru is the world's top fishmeal exporter, producing about a third of worldwide supply. Enrique Castro-Mendivil/Reuters/Landov hide caption 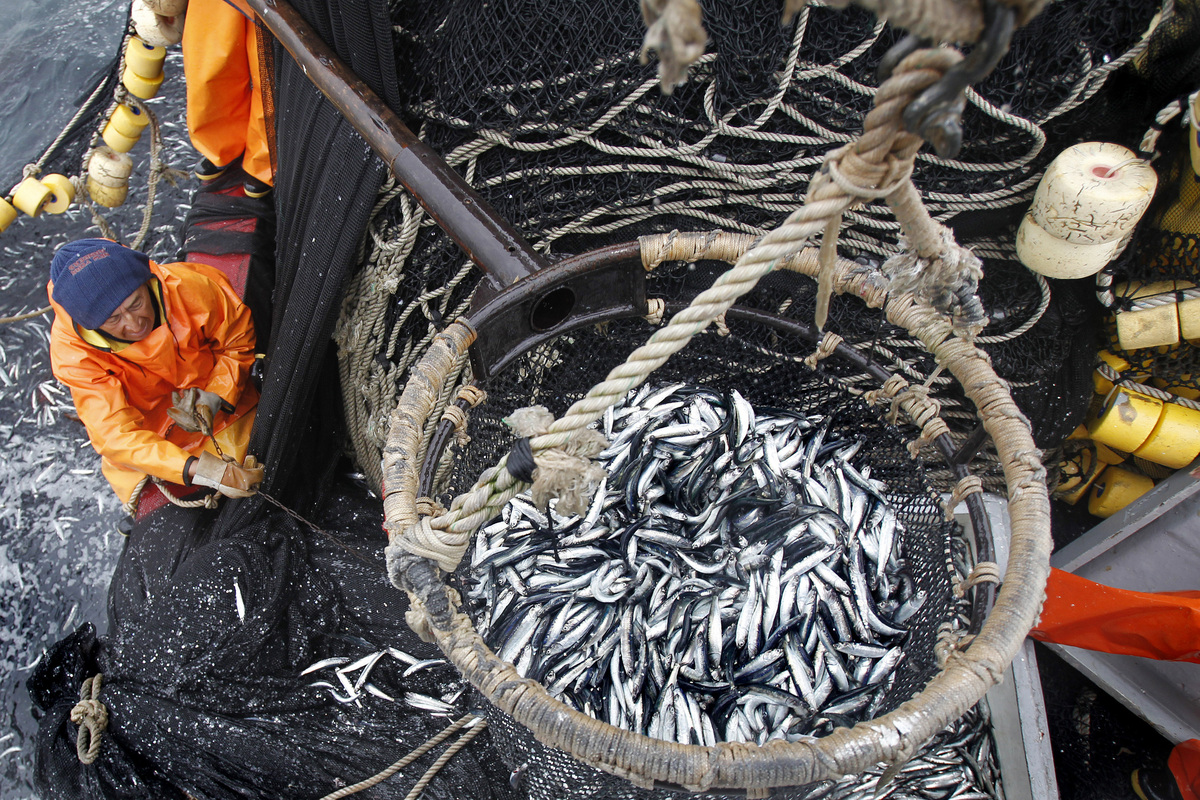 A fisherman pulls a basket filled with anchovies aboard a fishing boat off of Peru's northern port of Chimbote, in 2012. Peru is the world's top fishmeal exporter, producing about a third of worldwide supply.

Small fatty fish like mackerel, herring, sardines and anchovies are high in omega-3s, vitamin D and low on the food chain.

Those shining attributes have earned them plenty of nods from doctors and environmentalists alike, as we've reported. They're not among the most popular seafoods in the U.S., though, partly because of their fishy taste.

But if you knew that eating these fish would mean shrinking your carbon footprint a wee bit, would that convince you to buy them over say, that bag of frozen shrimp you just mindlessly threw into your grocery cart?

Robert Parker is betting that if you care about eating greener, you'll want to know about how much fuel it takes to catch your favorite fish. He's a Ph.D. candidate from Nova Scotia, studying the fishing industry at the University of Tasmania in Australia.

Parker and Peter Tyedmers, who directs the School for Resource and Environmental Studies at Dalhousie University in Halifax, recently published an analysis of a fishing industry fuel use database Tyedmers developed. Their analysis finds that fisheries producing the small fish – sardines, mackerel, and anchovies — are "among the most energy and carbon-efficient forms of protein production." The paper appeared in the journal Fish and Fisheries on July 4.

They also found that fishing for shrimp and lobster are almost as fuel-intensive as raising livestock. As we've reported, raising livestock has more of an impact on the environment than any other food we eat.

For example, Parker says, to catch a metric ton (about 2,200 pounds) of sardines or anchovies, it takes about 5 gallons of fuel.

Now, U.S. and Canadian lobster outfits "are a bit more efficient because of the higher lobster biomass in the ocean," he says. But they are still burning close to 264 gallons of fuel to catch those 2,200 pounds of crustacean.

So why is all this fuel getting burned? As the fishing industry has evolved in the last century from throwing out a few lines over the local dock to industrialized operations, we've been able to fish in more parts of the ocean and freeze our catch right on the boats.

But "a consequence of many of these advancements has been the increased reliance of fisheries on larger vessels, the motorization of fishing fleets with more powerful engines and the increased demand by fisheries for fossil fuels to power everything from propulsion and gear operation to on-board processing, refrigeration and ancillary services such as navigational aids," the paper says.

And the boats – not the packing plants or trucks transporting fish to the store — are where the bulk of the burn comes from, Parker says. The energy needed to get fish to the dock accounts for 60 to 90 percent of the fishing industry's total energy use and emissions.

"Fuel is the second biggest cost" in fish production, says Parker, and labor is first, so to encourage more efficient fisheries – and fewer greenhouse gas emissions — we should be "implementing measures shown to decrease fuel consumption."

And what people do with the fish is inefficient, too. Much of the mackerel, sardines and anchovies get turned to livestock and aquaculture feed, rather than going right to hungry humans. So we're "taking an efficient system and making it part of an average or inefficient system," he says.

But getting more people to eat these fish is a tough sell, at least on this side of the Atlantic. Parker himself admits that he wasn't always a herring fan, but on a trip to Denmark, that's what was served at the hotel breakfast, so he gave it a try.

Now, he's a believer. "If you have pickled herring, it's one of the most delicious things," he says.

Parker acknowledges that his fuel and fishing study has some limitations. For starters, its largely built from fisheries data from Europe and Australia, where the best records are kept, as well as some from North America. The database does not have much data on fuel use and fishing in the developing world — yet.

Also, he notes, fisheries are not generally giant offenders when it comes to the food system's carbon emissions. "Fisheries in general have a relatively low carbon footprint when it comes to food ... they don't have [the] methane associated with cows, and feed costs," he says.

But they hope their work goes beyond emissions. "We're looking at all the different factors now – we need to feed people, we need to support rural communities, we need to provide healthy and high quality food to people – one niche issue is the role of fisheries in fuel consumption."