Accessibility links
Should We Return The Nutrients In Our Pee Back To The Farm? : The Salt A group of environmentalists in Vermont aren't at all squeamish about "pee-cycling." A local hay farmer is using their pee as fertilizer as they run tests to find out how safe it is for growing food.

Should We Return The Nutrients In Our Pee Back To The Farm?

Should We Return The Nutrients In Our Pee Back To The Farm? 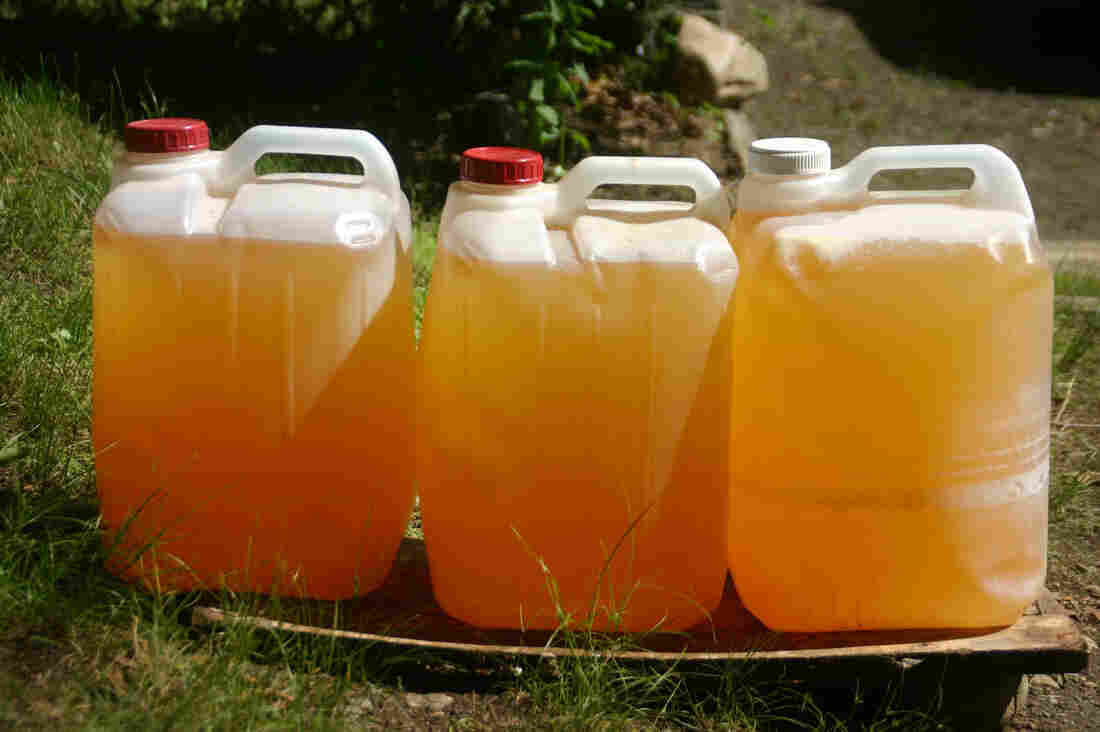 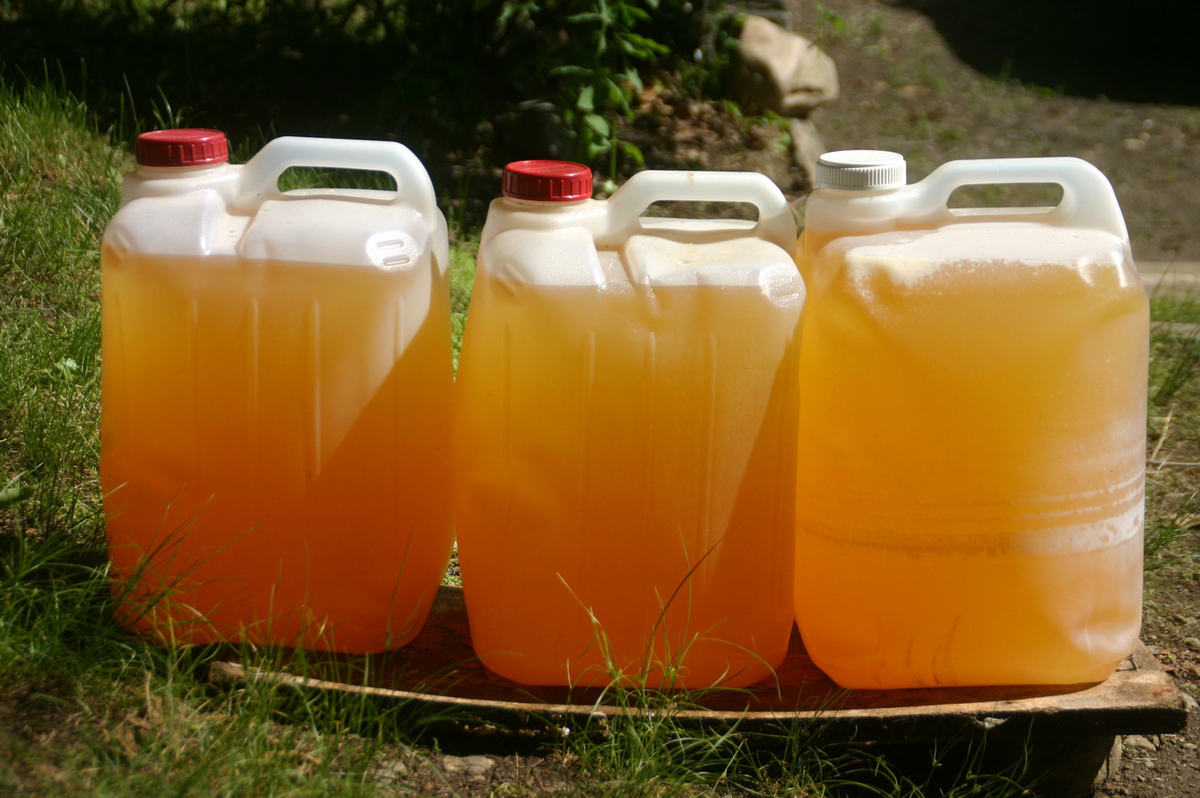 More than 170 volunteers in the Brattleboro, Vt., area have contributed urine to the Rich Earth Institute field trials.

Let me guess how you feel about your urine: Get that smelly stuff away from me as fast as possible?

A small group of environmentalists in Vermont isn't as squeamish. Instead of flushing their pee down the drain, they're collecting it with special toilets that separate No. 1 and No. 2. 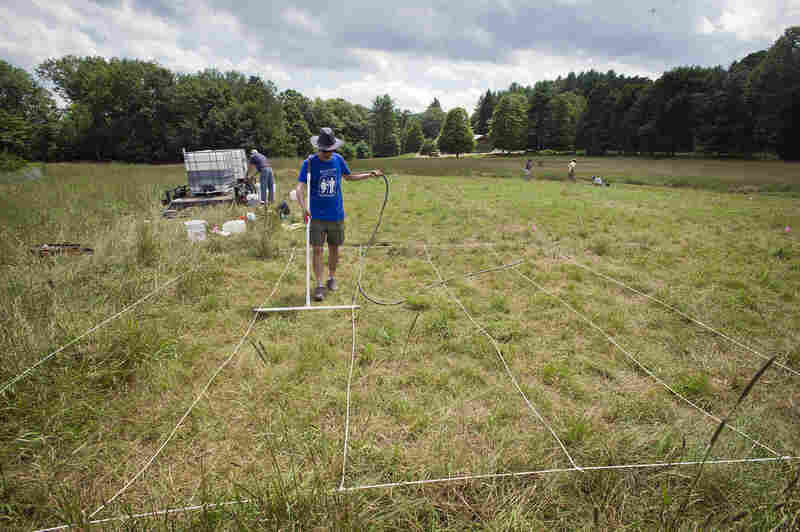 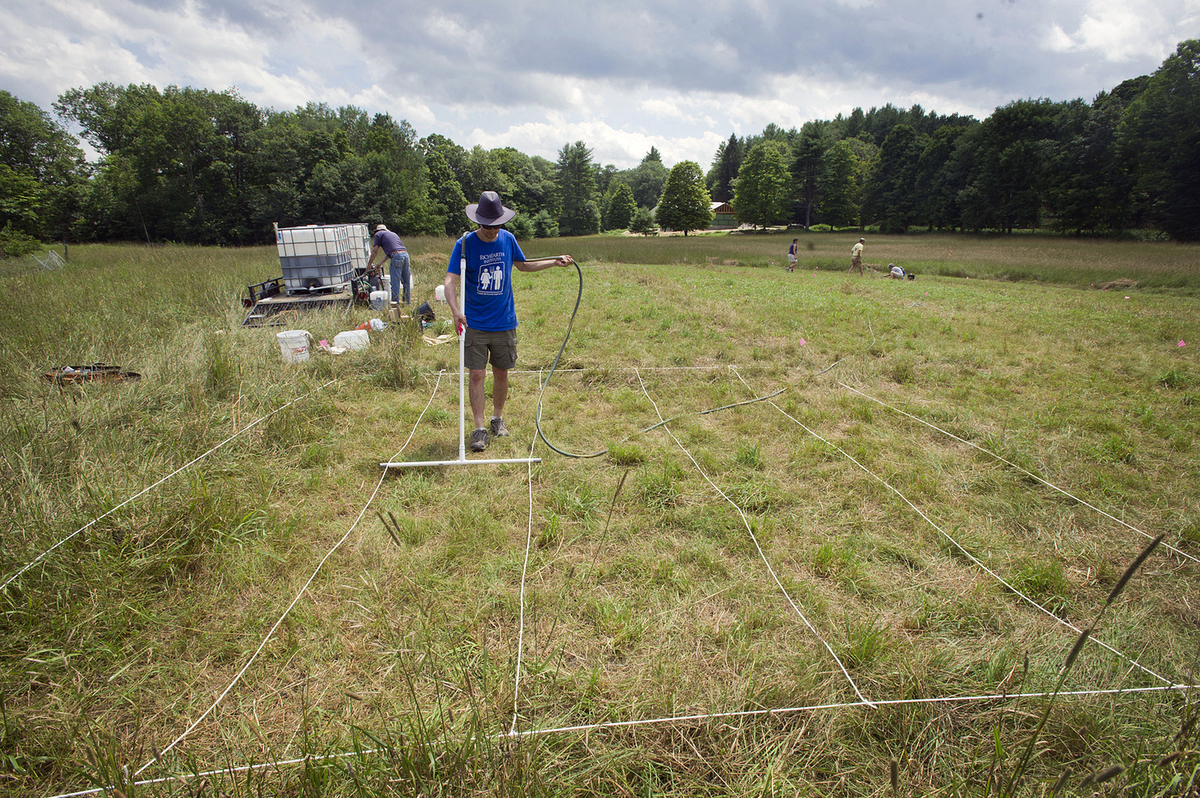 Abraham Noe-Hays, research director of the Rich Earth Institute in Vermont, applies urine to a 5-by-5-meter test plot on a hay farm.

Then they're pooling the urine of the 170 volunteers in the pilot project (a quart or so, per person, daily) and eventually giving it to a farmer, who's putting it on her hay fields in place of synthetic fertilizer. The goal is to collect 6,000 gallons this year.

The logic driving this avant-garde project of the Rich Earth Institute, based in Brattleboro, Vt., is that it's foolish and wasteful to part with the precious nitrogen and phosphorus that moves from the food we eat right through us — especially when farmers have to buy fertilizer at great expense to put those very same nutrients back into the soil.

What's more, founders Abraham Noe-Hays and Kim Nace tell The Salt, once our urine enters the wastewater system, drinking water carries it to a treatment facility, where the nutrients become pollutants that can contaminate waterways and cause algal blooms, among other issues.

"One goal is preventing the pollution caused by peeing in water — keeping pee out of the waterways and protecting water quality," says Noe-Hays. "And we can also make agriculture more sustainable and resilient by returning these nutrients to the soil. Urine is an inherently local and renewable source of fertilizer."

The idea of "pee-cycling" has much in common with the "night soil" tradition, as well as the newer practice of using biosolids, or sewage sludge that's been transformed into soil amendment for farmers. Several wastewater treatment plants in the U.S. have been making and donating biosolids, which are regulated by the Environmental Protection Agency, to farmers for years. But the practice is controversial because some activists claim that even certified biosolids could contain harmful chemicals.

Whole Foods Bans Produce Grown With Sludge. But Who Wins?

The average human generates 8 pounds of nitrogen and almost 1 pound of phosphorous in a year's worth of urine. And those nutrients come in a form that plants can use. Though Rich Earth is the only legally authorized and publicly documented urine reuse project in the U.S., many other countries — rich and poor alike — have recognized its potential, and are conducting their own research.

Urine from a healthy person is sterile, so using it on farmland is considered safe: Even the World Health Organization has guidelines for reusing urine in agriculture.

The problem, though, is that with the urine-diverting toilets, which some of the REI volunteers are using (others have waterless urinals with removable containers), the pee may get contaminated. So to kill off germs, Nace and Noe-Hays are testing two sanitization methods: pasteurization and storing it for a month or more, which allows the alkalinity to develop over time and kill microbes.

They are also trying to determine if there are medicines in the waste that might wind up in plants grown for food. So they're sending samples to researchers at the University of Michigan and University of Buffalo to find out, for a study funded by the EPA.

So far the only farmer using the product grows hay as a forage crop for animals. When the Rich Earth team measured the impact of the urine applied to her hay fields in 2013, they found that yields increased dramatically. And word has gotten around their community; they now have a waiting list. 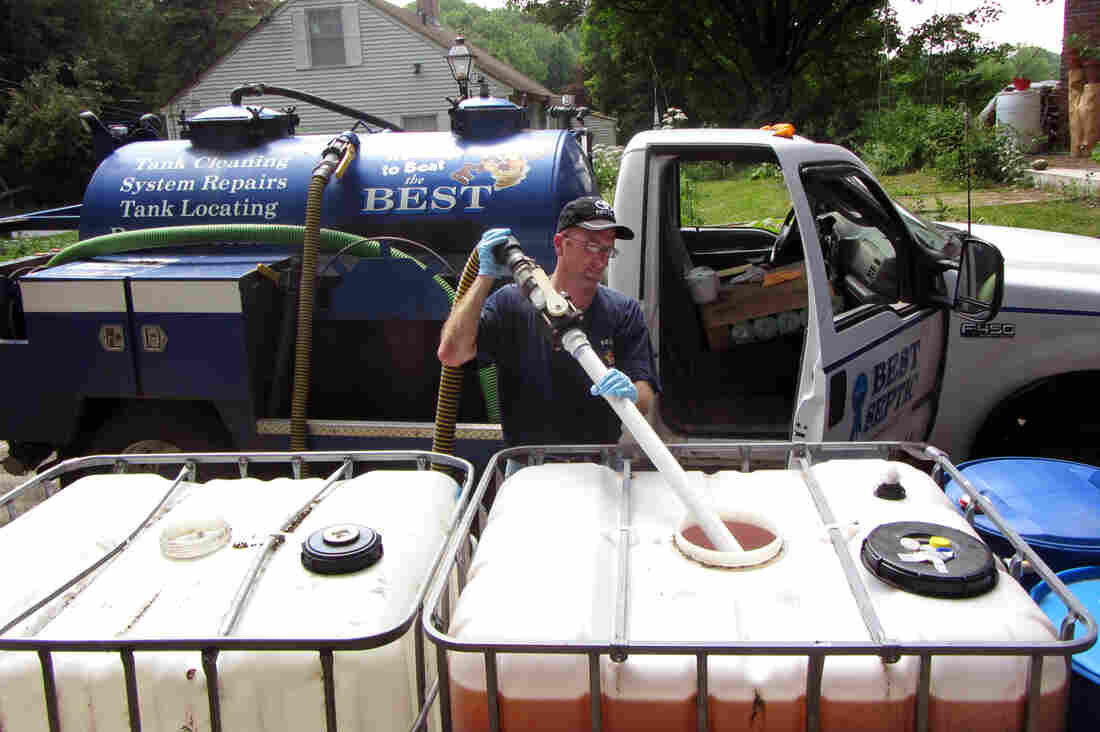 Seth True of Best Septic pumps urine from the 275-gallon tank. A family of three can fill a tank this size in eight months. Mike Earley/Courtesy of Rich Earth Institute hide caption 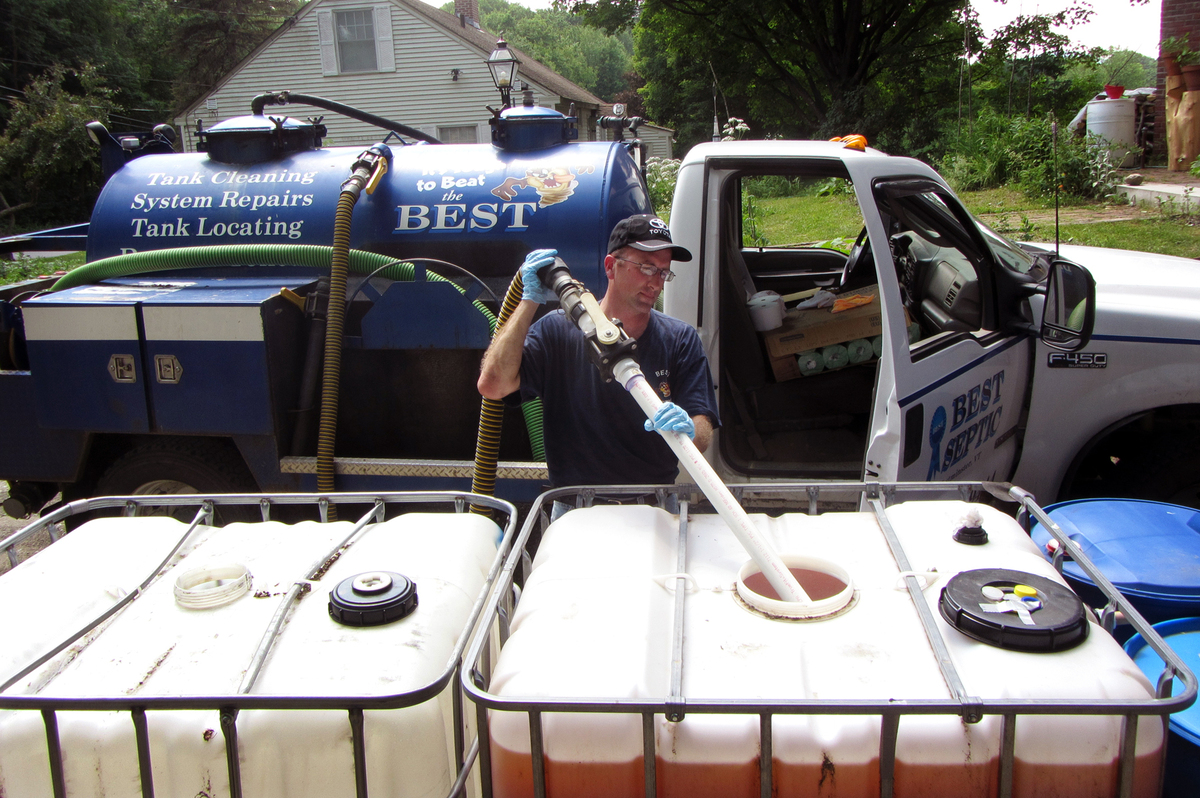 Seth True of Best Septic pumps urine from the 275-gallon tank. A family of three can fill a tank this size in eight months.

"We have more farmers who want urine brought to them than infrastructure to do it," says Nace. "But we can only begin to service this region. We would like to have enough [scientific] documentation that it could be replicated at the state level."

Scaling up such a project isn't just a hope of hippie Vermonters. Samantha Antonini, a researcher at the Center for Development Research at the University of Bonn in Germany, assessed two rather complex and expensive technologies for turning urine into fertilizer and found that agricultural yields with urine fertilizers were comparable to those achieved with commercial fertilizers.

Europeans, and particularly the Swedes, are intrigued by the idea. But, Antonini tells us in an email, "there's a long way to go before you can even think of using urine as a commercial fertilizer given the rather stringent regulations in the EU."

In the developing world, however, she thinks these systems could be especially helpful for those who don't currently have access to any sanitation. But so far, there isn't much demand for it. Still, "ecological sanitation" is becoming a bit of a buzzword — the wonky version of "pee-cycling."