Accessibility links
Chef Grills Steak, Volcano-Style, With Molten Lava : The Salt After Sam Bompas roasted marshmallows over lava at a volcano in Japan, he wanted to recreate the experience. So he asked a geologist and sculptor who'd built an artificial volcano to host a barbecue.

B&P Cook Out from robert wysocki on Vimeo.

What happens when a chef, a sculptor and a geologist team up for a culinary stunt? You get a molten lava barbecue.

"Cooking with lava is simply the most spectacular way to grill a 10-ounce rib-eye steak," says chef Sam Bompas, a member of the London-based culinary design duo Bompas & Parr that spearheaded the stunt.

Bompas first tried cooking with lava on a trip to Sakurajima, an active volcano in Japan. A self-proclaimed "architectural foodsmith" with a long resume of experimentation, Bompas didn't hesitate to jump a fence to try roasting marshmallows over a stream of flowing lava.

The experience was so intense that he wanted to share it with others. But he couldn't bring people to the volcano – so he looked for a way to bring the volcano to the people.

"We found there is one man in the world who can make synthetic lava," says Bompas, "and we called him up." 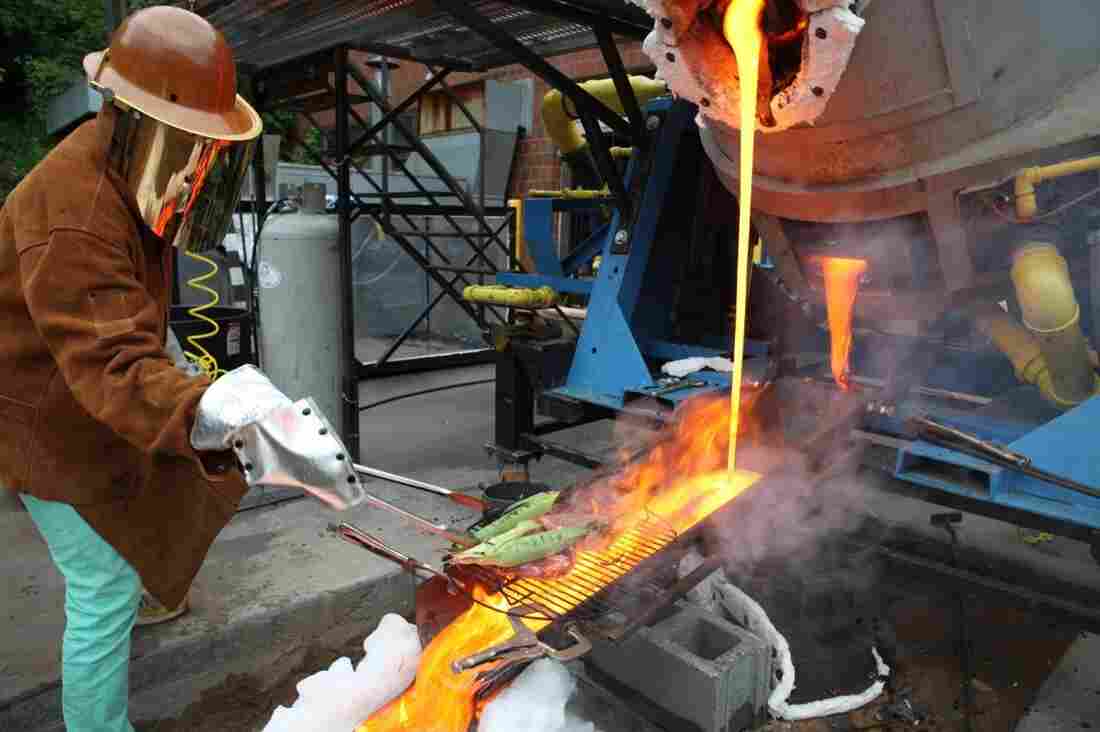 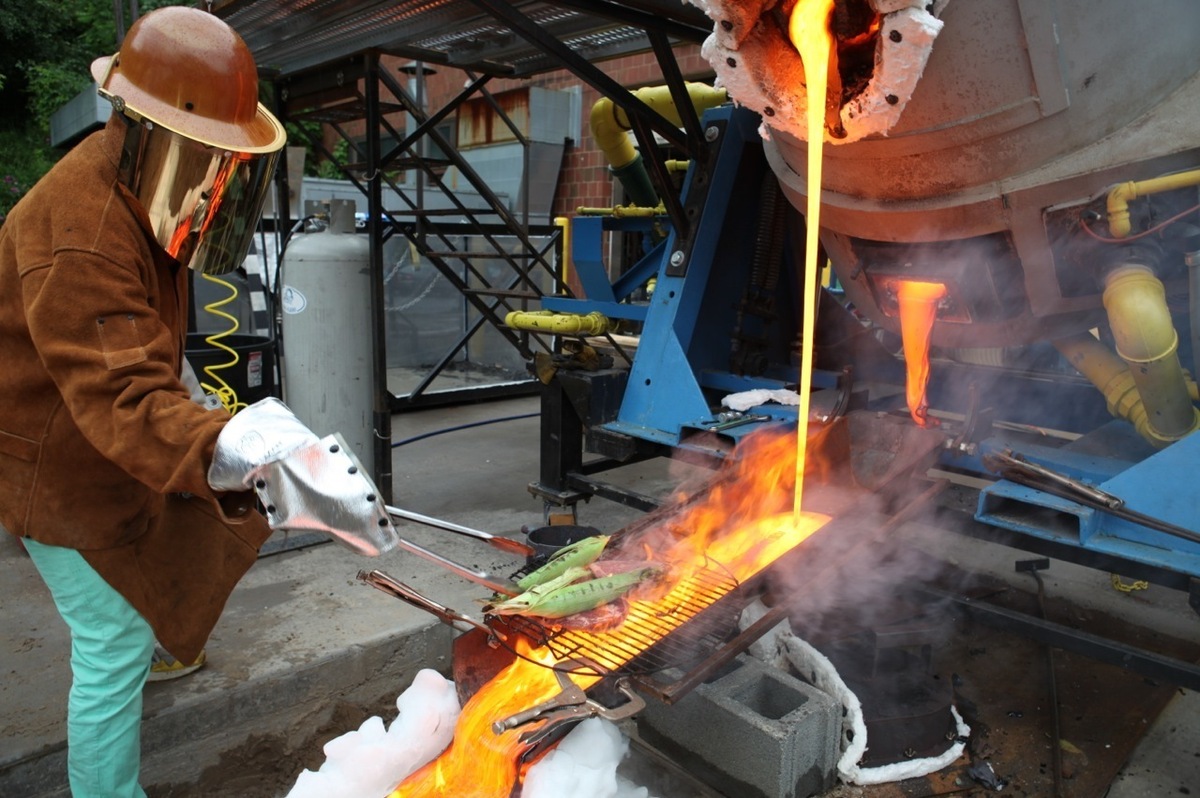 Harry Parr of Bompas and Parr gets volcanic on 10-ounce rib-eye steaks and ears of corn.

Courtesy of Bompas and Parr

Actually, there are two: sculptor Robert Wysocki and geologist Jeffrey Karson of Syracuse University. They have constructed their own artificial volcano in Syracuse — a furnace that takes 1.1 billion-year-old basaltic rock and heats it up to 3,000 degrees Fahrenheit, the temperature at which it turns molten.

"It's not unlike the Crock-Pot that's on your counter," says Wysocki, since the furnace has an metal containment vessel on the outside with an inner crucible that withstands high heat. But their "Crock-Pot" is about the size of a car.

Wysocki, Karson and volcanologists use the furnace to study lava flows; it's a far safer environment for this kind of research than the side of a volcano. But they were intrigued by Bompas and Parr's idea to use lava to cook food — in this case, steak, corn and marshmallows. On June 25, the team came together in Syracuse to make it happen.

"It is the heat that most chefs dream of," says Bompas. "You are standing before this molten lava that flowing out, and it is beautiful."

With that kind of heat, the steak charred on the outside, while remaining a perfect medium-rare in the center. And Bompas says they didn't get any of the gases you'd get if you were cooking over an open gas, charcoal or wood flame altering the flavor. 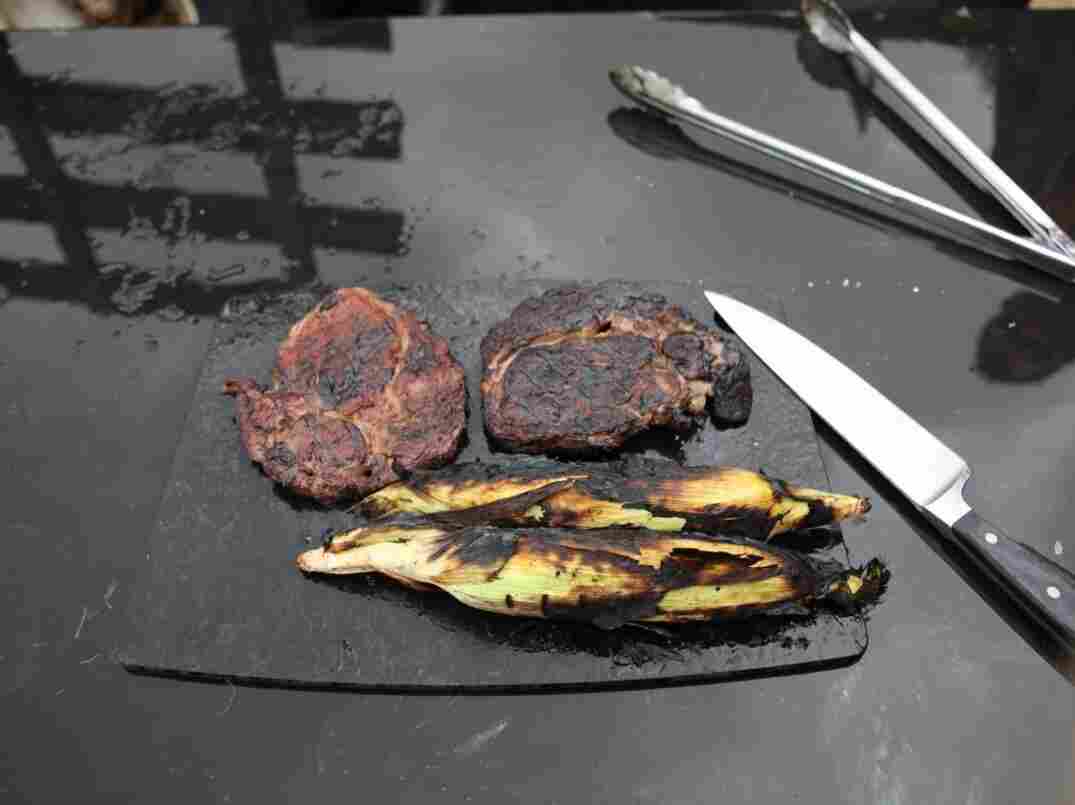 At 2,000 degrees Fahrenheit, the meat chars on the outside, while remaining a perfect medium-rare in the center. Courtesy of Bompas and Parr hide caption 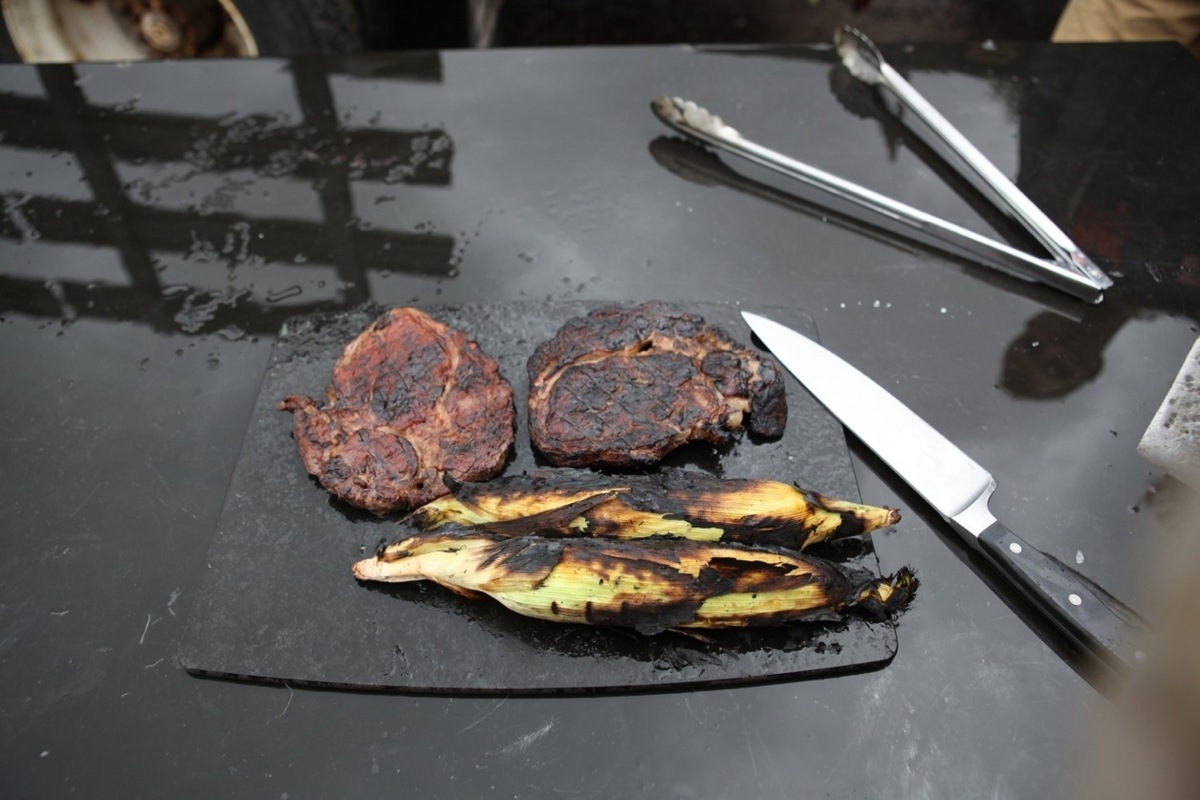 At 2,000 degrees Fahrenheit, the meat chars on the outside, while remaining a perfect medium-rare in the center.

Courtesy of Bompas and Parr

Wysocki agrees: "It was the best steak I've ever had. It was just the flavor of that meat."

The downside? It takes 60 to 70 hours for the furnace to melt all that rock into lava. Once the lava cooled down a bit, they all roasted some marshmallows and enjoyed s'mores.

So does Bompas suggest we decamp to Hawaii to stage our own volcano cookouts?

"Only taking all precautions," he says. "Or call us up, we are ready to grill."

According to Bompas, they have devised a way to transport the five-ton artificial volcano to London. And they hope to soon launch a "lava banquet" service. All you need to book it is a month's lead time and a minimum of 500 guests, and then you too may be able to barbecue meat over molten rock. (They haven't listed the price for such a service, but we can only imagine it'll induce volcanic reactions.)