Accessibility links
Mass. To Make Big Food Wasters Lose The Landfill : The Salt By October, the state will have the most ambitious commercial food waste ban in the U.S. Institutions that produce more than a ton of waste a week will have to find new uses for their scraps. 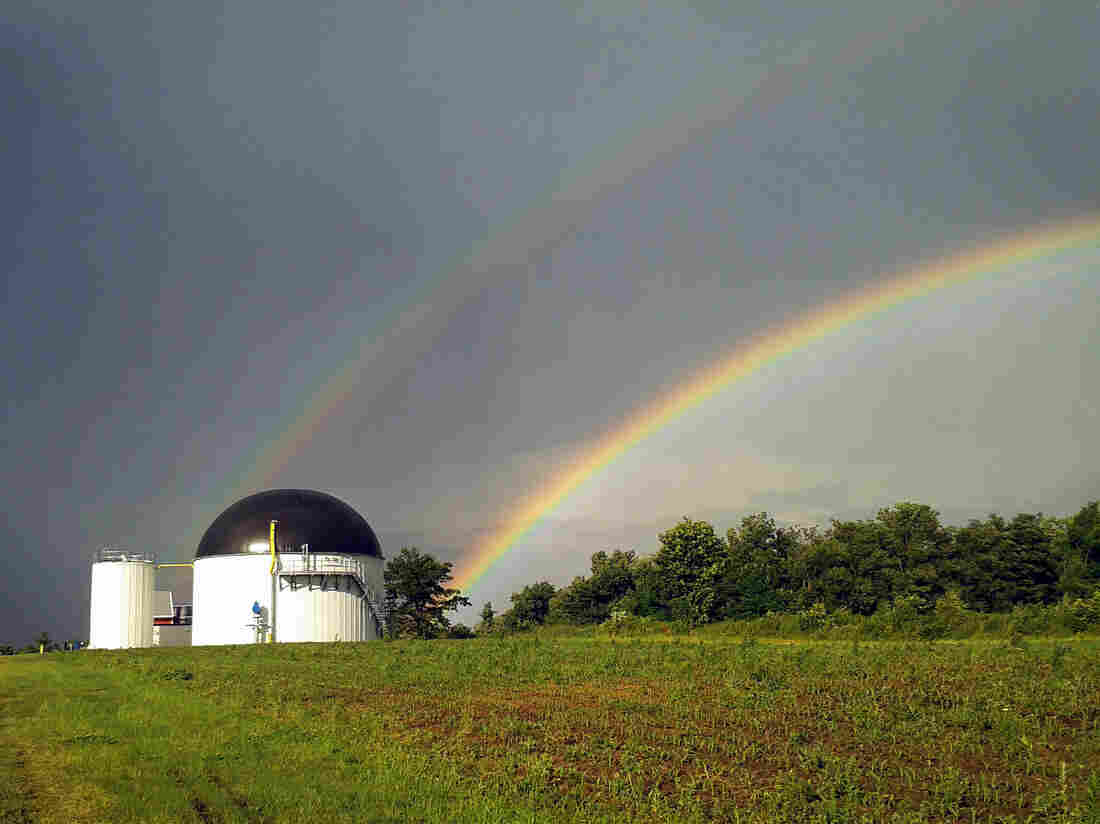 There may not be a pot of gold at the end of these rainbows, but there is an anaerobic digestion facility turning food waste into energy at Jordan Dairy Farm in Rutland, Mass. Randy Jordan/Massachusetts Clean Energy Center/Flickr hide caption

Sure, there's plenty you can do with leftovers: foist them on your office mates or turn them into casserole.

But if you're a big food waste generator like a hospital or a supermarket, your scraps usually go to the landfill to rot.

In Massachusetts, that's about to change, as the state prepares to implement the most ambitious commercial food waste ban in the U.S.

The ban, which will commence Oct. 1, applies to institutions that produce more than a ton of food waste a week. Those 1,700 some-odd supermarkets, schools, hospitals and food producers will no longer be able to send their discarded food to the landfill. Instead, they they'll have to donate the useable food and ship the rest to a composting facility, a plant that turns the scraps into energy or a farm that can use it as animal food.

"It's a material that we've historically wasted. And now we're putting in place the rules and regulations that should allow this resource to be utilized in lots of different kinds of ways," David Cash, commissioner of the Massachusetts Department of Environmental Protection, tells The Salt.

What's driving this policy? Landfills aren't very environmentally or financially attractive anymore. They generate greenhouse gases, and space is getting increasingly limited – and costly — as they start to reach capacity.

The ban is part of the state's plan to reduce its waste stream by 80 percent by 2050. According to the Department of Environmental Protection's most recent data, Massachusetts disposed of 4.9 million tons of solid waste in 2011, with food waste making up about 17 percent, or about 830,000 tons.

Massachusetts isn't the first state to try to aggressively curb food waste this way. Vermont and Connecticut have similar bans, but right now they only apply to facilities that produce two tons a week and are located within 20 miles of a food waste recycling facility.

Cash says his state, which has been crafting the ban for nearly a decade, has spent the last four to five years helping institutions prepare. He estimates about 80 percent are already complying or have a plan in place.

Part of the strategy is to prevent food from being wasted in the first place. Sabrina Pashtan, sustainability coordinator for Boston University's Dining Services, says the university's food waste reduction program is trying to discourage students from taking more food than they can eat. It is moving towards small-plate, made-to-order dishes and eliminating cafeteria trays.

"You can only carry a limited amount of plates and cups," said Pashtan. "So people are less likely to pile up. They actually have to go back if they want more."

Of course, there will always be some waste. And BU is already complying with the ban by having it hauled away to be composted. Pashtan says that so far, composting the waste has proved to be less expensive than having it taken to a landfill.

Some of the state's big food wasters are also handing off their scraps to the growing anaerobic digestion industry, which transforms waste into biogas that can be burned as a fuel.

AGreen Energy has placed anaerobic digesters on two farms in Massachusetts. One is Barstow's Longview Farm in Hadley, Mass., which produces milk for Cabot Creamery in West Springfield. Cabot makes butter from the milk, and then sends the byproduct, buttermilk, back to the Barstow's, where it's mixed with manure. 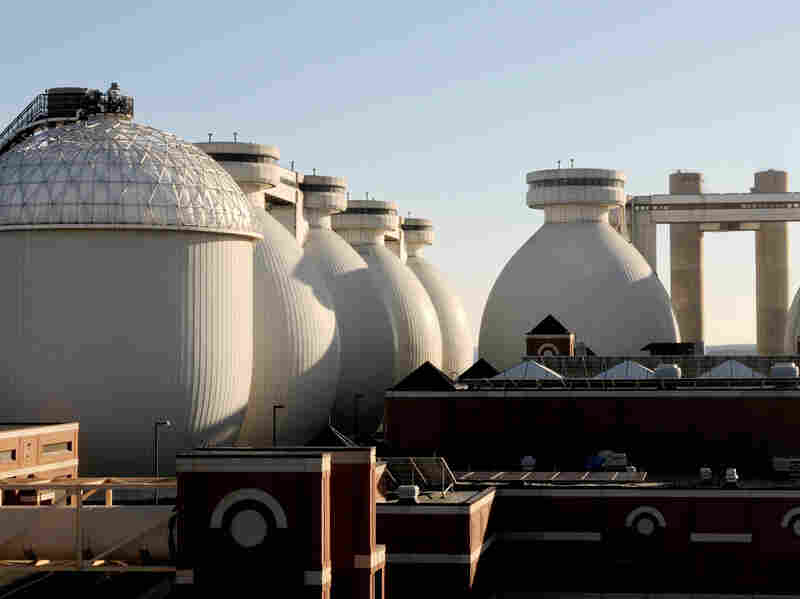 "We ... mix [the food waste] together with the manure, and it goes into the digester. A digester is nothing more than a mechanical cow's stomach," says Bill Jorgenson of AGreen Energy.

Like a cow, the digester produces methane, which is piped to a generator that produces electricity to power the farm, while the energy captured off the generator provides heat. The farm sells the excess electricity back to Cabot to help power its facility, and what's leftover in the digester is used on the farm as fertilizer.

"It's an ecosystem, as I call it. In the food business we call it a closed food chain. In other words, everything goes back," said Jorgenson.

State environment commissioner Cash says the ecosystem that has built up around Barstow's farm is exactly the type of innovation they hoped the ban would create, and just part of what he paints as a very sunny outlook.

According to Cash, the ban will allow more food to make its way into the mouths of the hungry, organizations will save money on waste disposal, there will be fewer landfills and greenhouse gases, and more green energy and green energy jobs — not to mention the fertilizer.

That list of expected benefits, says Cash, is a work of public policy art. And while his department won't know exactly how each institution is adapting to the ban, it will track compliance by monitoring who's disposing how much at the landfills.

But the anaerobic digestion model has to be both environmentally and economically sustainable to keep the farmers in business. David Barstow, who bought the multi-million dollar digester through a combination of state grants and bank loans, says he's forecasting the equipment will pay for itself within six years. The digester has only been up and running for six months, and they're still working out the kinks.

Cash says the state is encouraging the anaerobic digestion industry with grants to help farms buy digesters and help companies build digestion facilities, or help existing wastewater processing plants and landfills expand into food waste digestion. Some companies, like Stop and Shop, are even in the process of building their own anaerobic digester on site.