Accessibility links
Will Americans Buy Bug Snacks? Maybe ... If They're Funny And Cute : The Salt The "ick factor" has kept consumers in the U.S. from eating crickets, locusts and mealworms. To convert skeptics, bug-food advocates are trying to win them over with sleek packages and clever names. 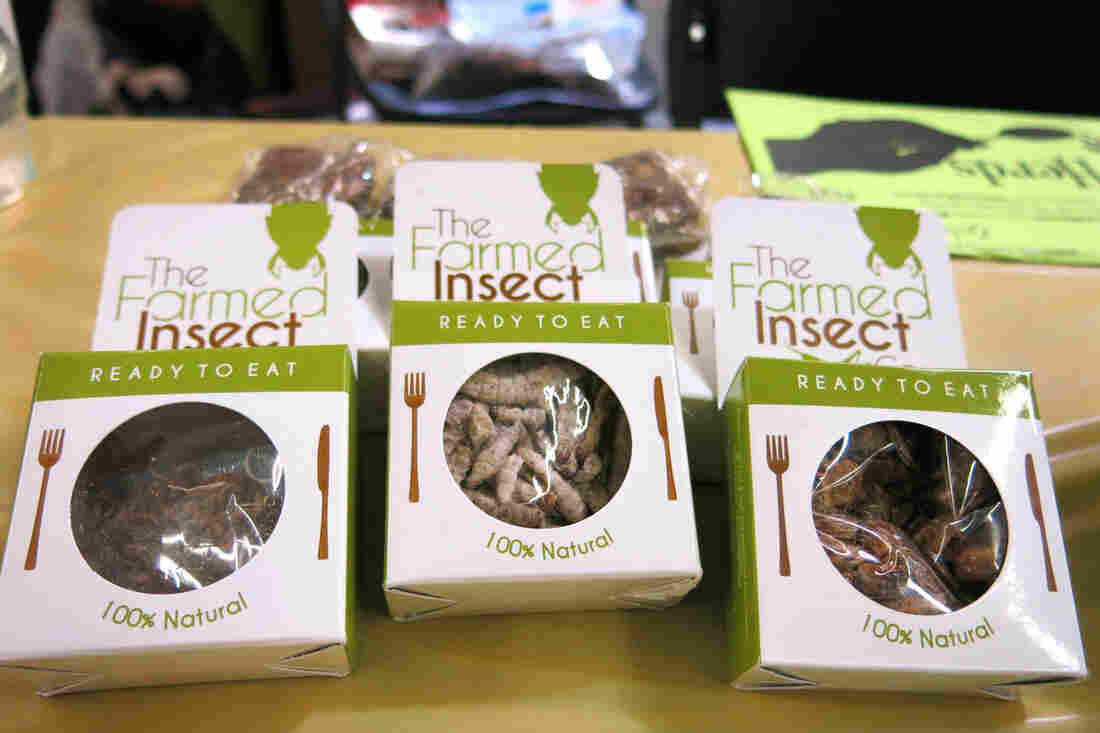 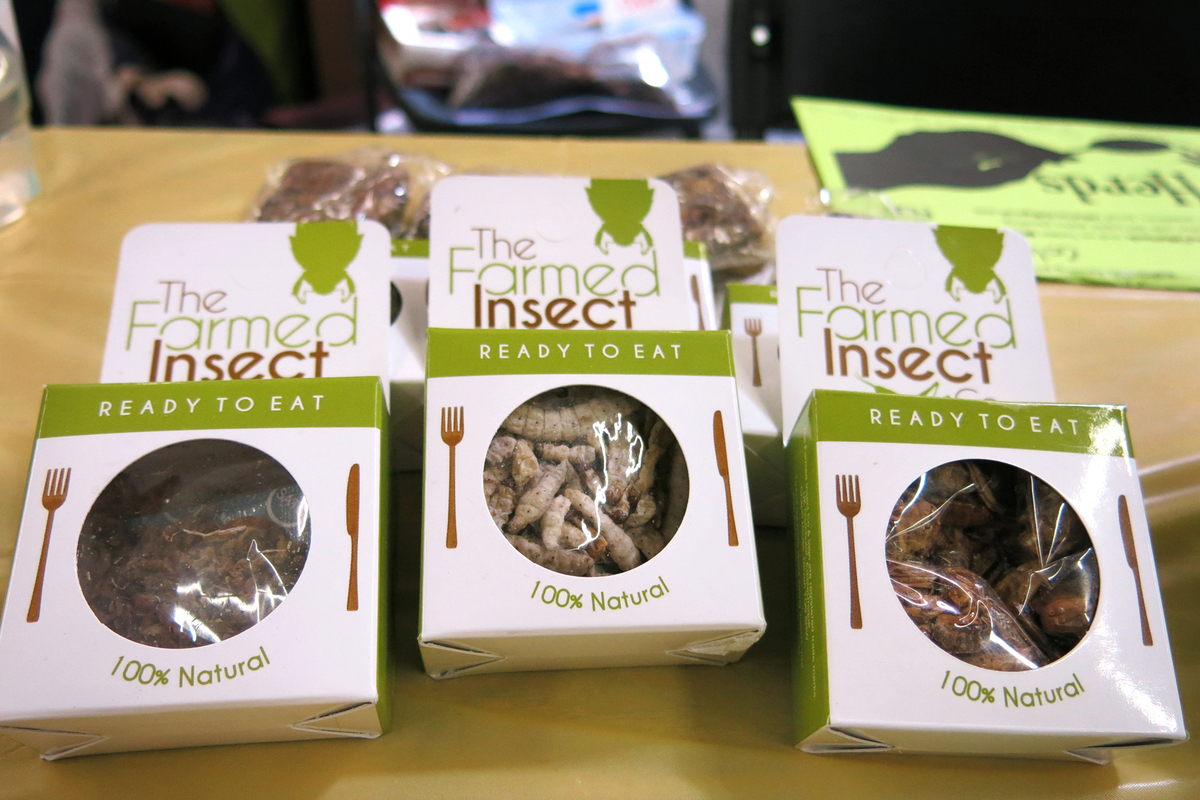 Packages of edible insects lie on a display table at the Denver County Fair.

Insects can be a great source of protein, and in many parts of the world, people gobble them up.

But here in the U.S., a certain "ick factor" has kept consumers from eating crickets, locusts and mealworms. To combat the ickiness and convert skeptical consumers, bug-food advocates are trying a specific marketing tactic: be clever and cute.

Behind a table at the 2014 Denver County Fair, Wendy Lu McGill, an advocate of eating bugs — a practice known as entomophagy — preached the benefits of crickets and locusts. Fairgoers, lured in by the trays of bite-sized cookies and protein bar samples, heard about cricket nutrition.

"Crickets have as much calcium as milk," McGill says. "And then, environmentally, they're a lot more sustainable than chickens and particularly cows and pigs."

She's usually met with scrunched-up noses and looks of disgust, at least from the adults. Children tend to be more receptive, McGill says. She's been promoting entomophagy for years, so she's used to it, she says.

McGill's table is full of sleekly designed packages and clever names. There are Hopper bars and protein bars from Exo, a Brooklyn-based food company, both made with crickets.

"I just noticed the X of Exo are antennae, plus 'Exo' as in exoskeleton, so it's all intelligent cutesiness," McGill says.

Intelligent cutesiness is a good way to describe this entire sector. Massachusetts-based Six Foods is rolling out chips later in 2014 with a cricket base called, get this, Chirps. There have been efforts to rename locusts "sky prawns," to make them more appetizing. The thought is, if you can make people laugh with a pun or cute graphic, it might be enough for them to let their guard down.

"There is obviously a hurdle to get over, in terms of the 'yuck factor,' " Jack Ceadel, founder of the Austin, Texas-based Hopper Foods, says. His company is just one of a handful of bug-infused startups that have popped up in Utah, Massachusetts and California.

Within the sector, food makers are hyper-aware of consumers' squeamishness about eating insects, Ceadel says. That's why his products only use cricket flour, where the bug is pulverized, to make a high-protein powder that can be added to almost any processed food. But more importantly, Ceadel says, consumers can't see the bugs.

"The key to this is that people don't want to see the actual bug itself. It's the legs and the antennae that scare people," Ceadel says. 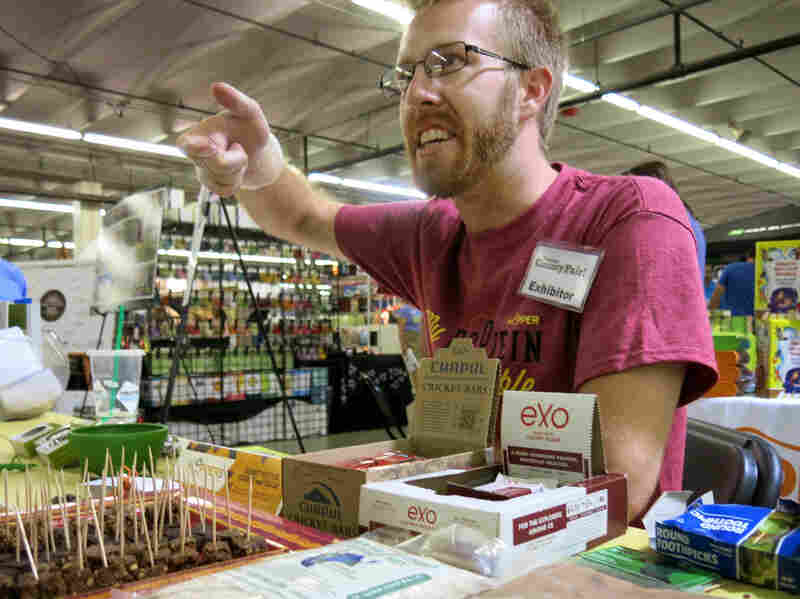 Cleverness in advertising and marketing is important to assuage consumer fears. But the growth in edible insect sales goes far beyond the novelty. Consumers might be first grabbed by a clever logo or well-designed package, but the makers of bug foods want to steer the conversation toward the environment, and how taxing it is to raise protein-dense food.

"The only argument against edible insects is a psychological taboo. And I understand it's a big one. It's a really, really big one," says Robert Nathan Allen, creator of the Austin-based nonprofit Little Herds.

Little Herds, with its logo of a ladybug with black and white cow spots, focuses on the environmental and social justice arguments in favor of eating bugs. It's not alone. A 2013 report from the Food and Agriculture Organization promotes eating bugs, calling them healthy and nutritious, with a far smaller carbon footprint than most livestock.

From an international development standpoint, insect-rearing is less capital-intensive than other animal husbandry, giving poorer farmers a method of entry. Once you start making comparisons to more culturally palatable forms of protein, like beef and pork, insects look a lot more environmentally friendly.

After he lists the most compelling arguments, even the most die-hard skeptics will try a cricket cookie, Allen says.

"Ninety-nine percent of the people that we talk to are at least willing to take a bite. And once they take that bite and they're knowingly eating an insect, it starts to break down a lot of those internal barriers. And it makes them question, 'What is food to me? What do I consider food?' " Allen says.

Getting over the taboo is one hurdle. But other snares, like a lack of federal regulation, research and food-grade insect farms are keeping these companies from really taking off, Allen says.

Back at the sample table at the Denver County Fair, Leah Stein, of Parker, Colo., is about to try her first cricket flour cookie, after just a little prodding.

"I didn't know what I was getting into when I walked up. We were just like 'free food'! There's probably at least one whole cricket in this, right?" Stein says.