Accessibility links
For A More Ordered Life, Organize Like A Chef : The Salt The French phrase mise-en-place means to gather and arrange the ingredients and tools needed for cooking. But for many culinary professionals, its organizing principles are also a way of life. 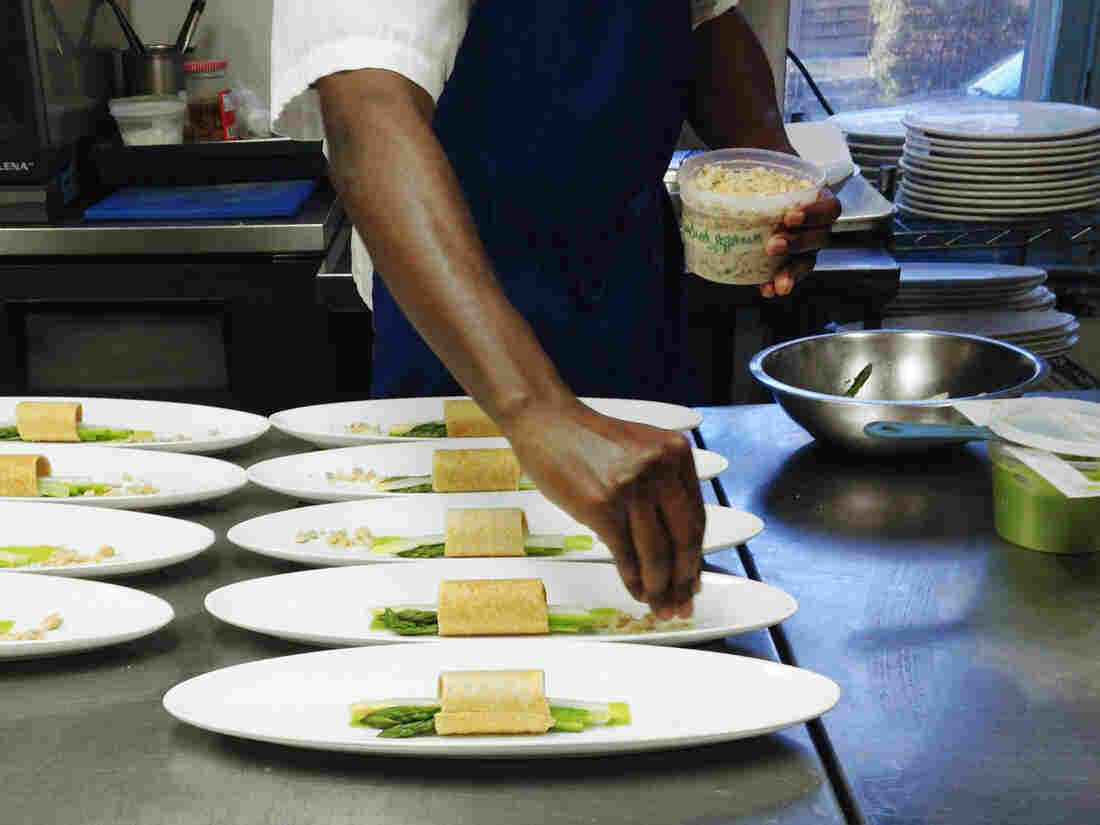 For chefs at the Marigold Kitchen in Philadelphia, as in most professional kitchens, it's all about order and organization. Dan Charnas/For NPR hide caption 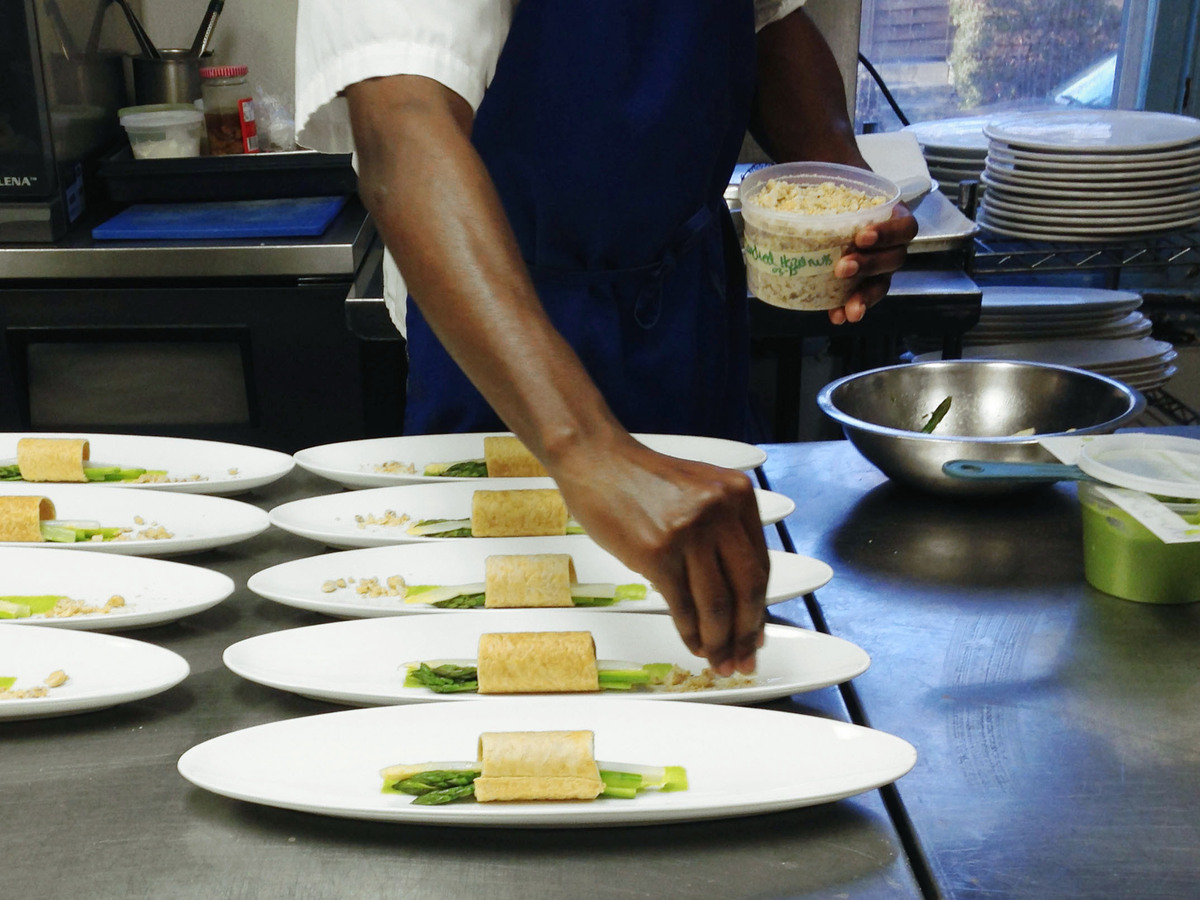 For chefs at the Marigold Kitchen in Philadelphia, as in most professional kitchens, it's all about order and organization.

Americans are obsessed with celebrity chefs. We talk about them, tweet about them and try to eat like them. But could we learn something more from them than recipes and technique?

According to Marketdata Enterprises, Americans spend nearly $10 billion a year on self-help and personal organization products. The market is huge, partly because most colleges and grad schools don't teach basic organization. But culinary schools and professional kitchens do.

Perhaps the principles of culinary organization can be extended to help even those of us who aren't top chefs.

The system that makes kitchens go is called mise-en-place, or, literally, "put in place." It's a French phrase that means to gather and arrange the ingredients and tools needed for cooking.

But for many culinary professionals, the phrase connotes something deeper. Some cooks call it their religion. It helps them coordinate vast amounts of labor and material, and transforms the lives of its practitioners through focus and self-discipline.

"I know people that have it tattooed on them," says Melissa Gray, a senior at the Culinary Institute of America. "It really is a way of life ... it's a way of concentrating your mind to only focus on the aspects that you need to be working on at that moment, to kind of rid yourself of distractions."

And it's a habit that some culinary students carry with them even when they're not in the kitchen. "You mise-en-place your life. You set up your books for class, you set up your chef whites, your shoes are shined, you know everything that you need every step of the day," says Alexandra Tibbats, another student at the CIA.

Gray says that she now arranges her home office as she would her mise-en-place. "My desk is specifically organized based off of where I reach for things the most. [It's] being so methodical to the point that you continually put your pen back in one specific place."

Ok, so how does one attain this level of organization?

"It starts with your list," says Wylie Dufresne, the James Beard award-winning chef and owner of New York restaurants wd~50 and Alder.

"What I used to do is, let's say I had 23 items of mise-en-place I had to do every day. So I'd take a pad and I'd write them all down on the way home. And then I would crumple the list up and throw it out," he says. "On my way to work I'd write the list again. And you become one with your list. You and the list are the same, because the list is scorched into your head."

But the key to mise-en-place is not so much the list, but the mindset. Cooks can easily do six hours of prep for a three-hour dinner shift. Mise-en-place forces cooks to account for every minute of their time and, says chef Dwayne Lipuma, every movement.

That way, chefs are always ready to go, Lipuma says. "They always have one foot pivoted just like a basketball player."

At Esca, an Italian restaurant in Manhattan's theater district, sous-chef Greg Barr describes what is perhaps the central tenet of mise-en-place: working clean.

"It's like a very ... Zen-like thing," he says. "All my knives are clean. Clean cutting board. Clear space to work. Clear mind."

Working clean in the kitchen is paramount because unclean food is dangerous. If chefs don't work clean, people can get sick. And it's also important to clean as you go, says Dufresne.

"Oh my God! If you don't clean as you go it is a mess!" he says. "And that's another thing you people at home could do: Because isn't the worst thing at the end of a successful dinner party doing a whole bunch of dishes? Wouldn't you rather break them all and buy new ones? It actually saves time if you clean as you go. It makes life so much easier."

Across town at Telepan, chef and owner Bill Telepan explains another principle of mise-en-place: slow down to speed up.

"I always say, 'Look, I'd rather you take an extra minute or two and slow up service to get it right.' Because the one minute behind you are now is going to become six minutes behind because we're going to have to redo the plate."

Upstairs in the kitchen, this issue plays out as Telepan coaches a new chef on how to make, of all things, a grilled cheese sandwich: 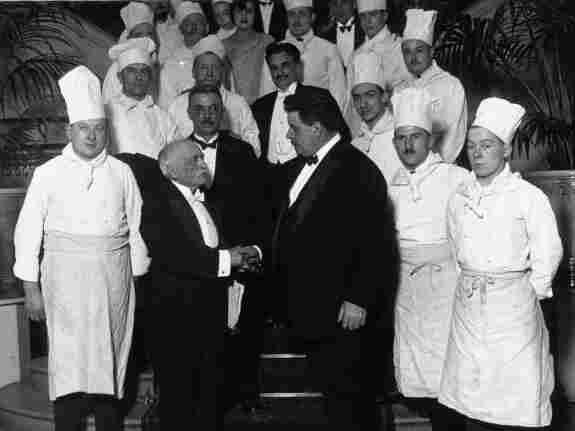 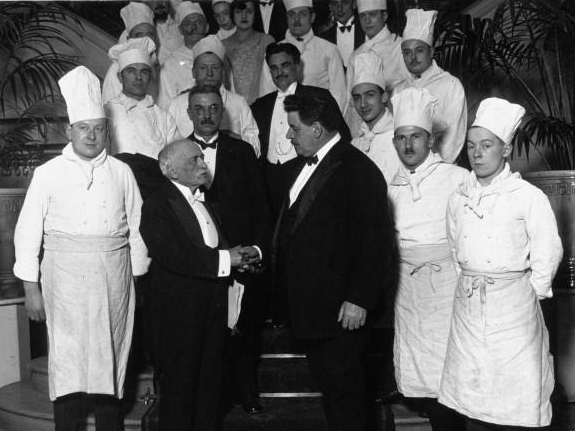 Chef Georges-Auguste Escoffier (in the foreground on the left), who invented the culinary "brigade system," photographed with French Prime Minister Edouard Herrio in 1928.

Some chefs say that mise-en-place is nothing more than a kitchen version of good old-fashioned military discipline. After all, the rigid culinary hierarchy codified in the 19th century by Georges-Auguste Escoffier is called the "brigade system."

"A chef, because of mise-en-place, he's always on time," says Andre Soltner, dean of the International Culinary Center in New York City.

He demands the same kind of efficiency outside his kitchen. "If I go to the doctor, and if he's not ready, I leave. And that's because of mise-en-place."

Other chefs — like Ari Bokovza of New York's The Harrison — admit that this can make domestic life a little intense: "The way we are at work starts to translate into the way we are at home. You wish that you could switch it off. If you asked my girl, you know, 'How is Ari at home?' She'll tell you, 'He's a [expletive] nut job! He can't sit still!' "

"You'll be able to sit down at the table with your kids and actually cook a meal. Get up a little bit earlier so you could breathe. You want to greet the day."