Accessibility links
'Shark Week' Fuels Shark-Meat Feeding Frenzy At Restaurants : The Salt The craze to embrace all things shark during Discovery's "Shark Week" in August is exploding onto menus. But the hype doesn't hide the fact that many of these creatures are endangered. 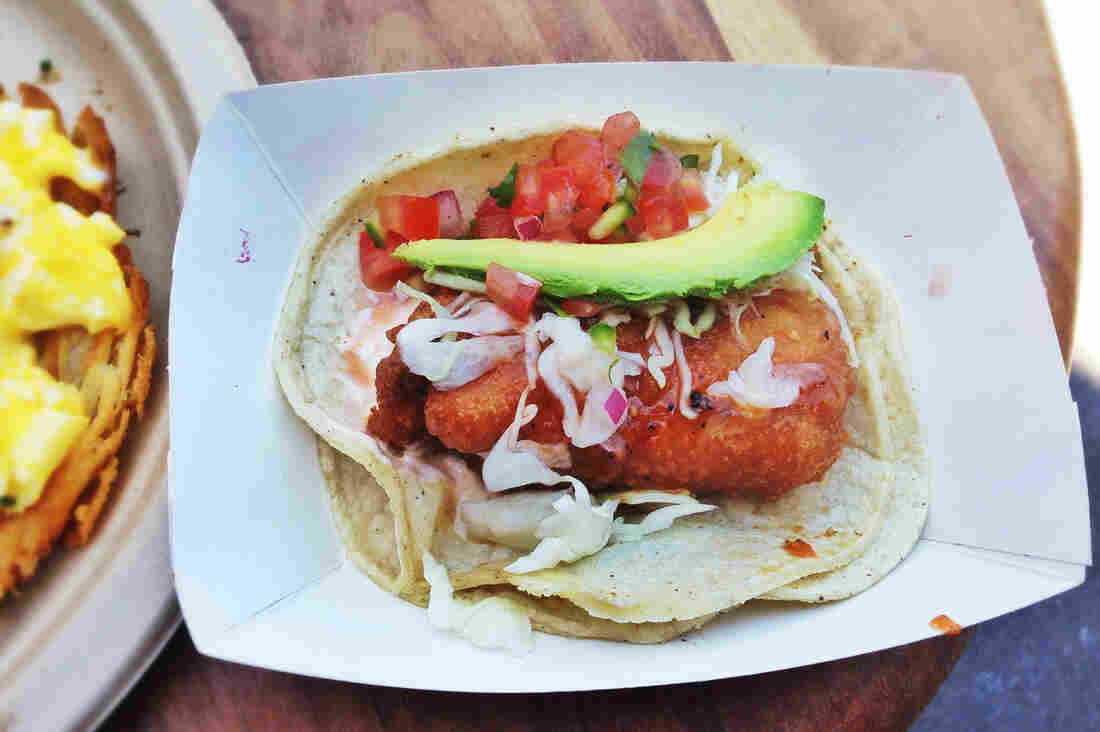 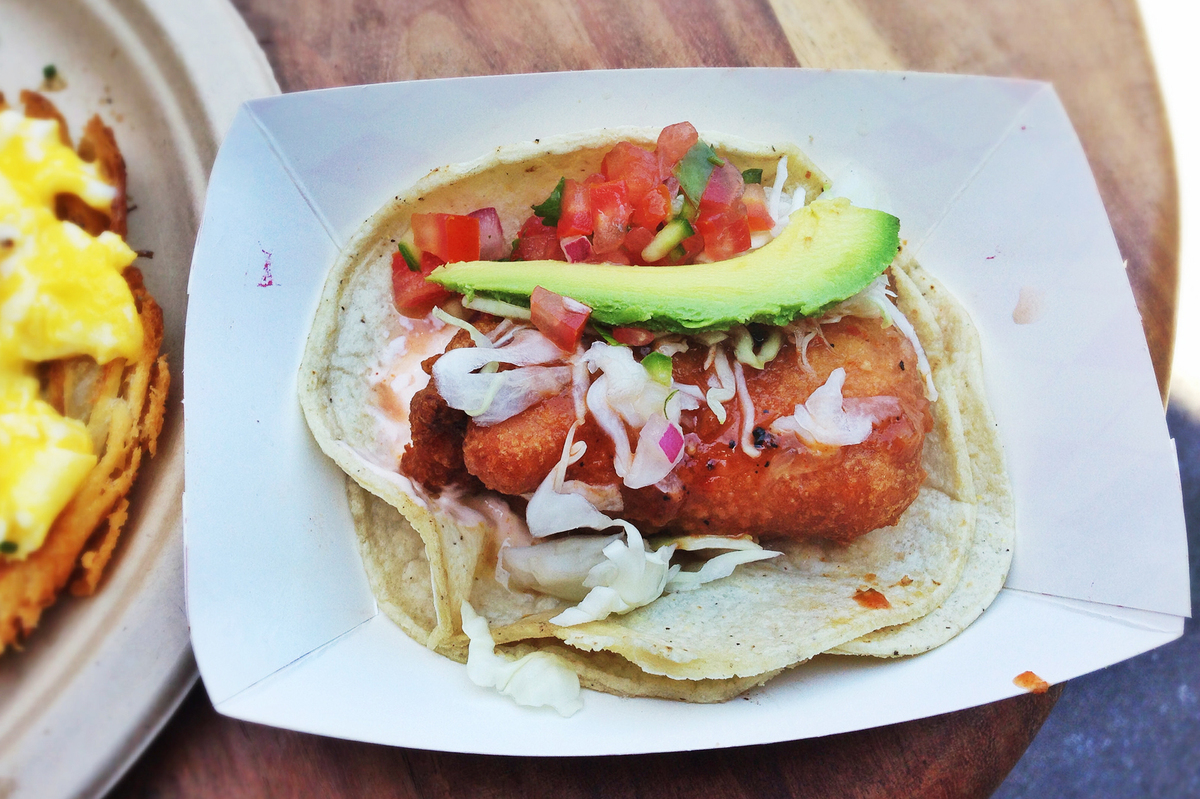 Take a bite — or or maybe don't — of this beer-battered mako shark taco with cabbage, pico de gallo, avocado, arbol chile and cream from Guerilla Tacos in Los Angeles.

Discovery Channel set viewership records in 2013 as millions of people tuned in to watch sharks feed, sharks attack, extinct giant sharks and researchers catch and tag sharks. Discovery's "Shark Week" returned on Sunday, and this year, to the dismay of conservationists, restaurants and markets nationwide are feeding the frenzy with a slew of shark meat promotions.

Shortfin mako shark, a slow-growing fish whose numbers are declining, seems to be the species of choice. It's being featured on menus all over the country — at Doc Magrogan's Oyster House in Philadelphia; Syberg's, a small restaurant chain in St. Louis; Sandbar Mexican Grill, with locations in Chandler, Ariz., and Phoenix; and GT Fish and Oyster in Chicago. In Louisiana, Rouses Supermarkets has a special on blacktip shark fillets at $4.99 a pound. Twitter is meanwhile buzzing with excitement over Shark Week specials, which often feature shark tacos and shark-themed cocktails. 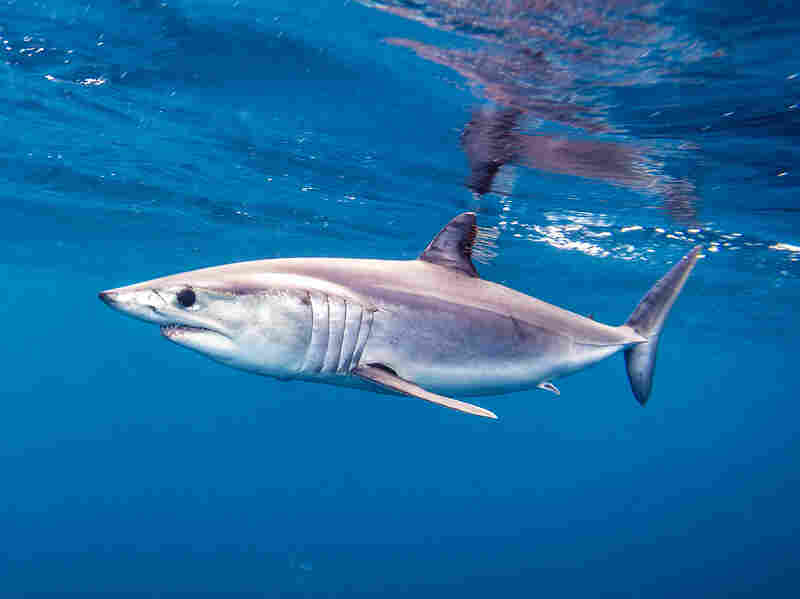 A Pacific shortfin mako shark off the coast of San Diego. A seafood supplier outside Chicago says he has never seen such high interest in shark meat as he has this year. Bryan Toro/iStockphoto hide caption 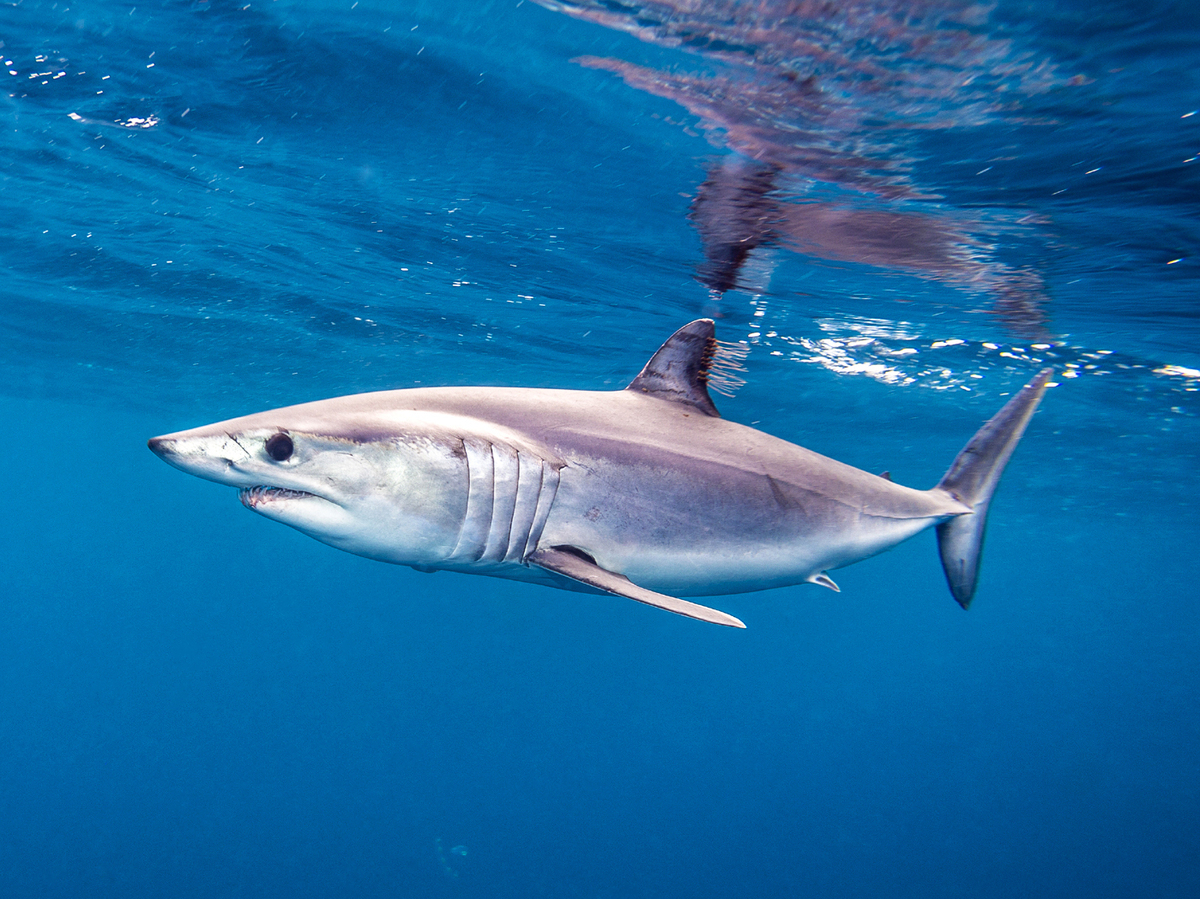 A Pacific shortfin mako shark off the coast of San Diego. A seafood supplier outside Chicago says he has never seen such high interest in shark meat as he has this year.

Michael Clark, a sales rep with Fortune Fish And Gourmet, a seafood supplier outside Chicago, tells The Salt he has never seen such high interest in shark meat.

"In 12 or 13 years, we have had virtually nobody looking for shark, but this year [for Shark Week] people are jumping all over it," says Clark, who is currently carrying Atlantic shortfin mako shark sourced from a supplier on the East Coast of Canada.

Shortfin makos are on the International Union for Conservation of Nature's "red list" of species at risk of extinction. The Atlantic population is declining and "vulnerable," with numbers estimated to be as low as just 30 percent of the species' historic levels.

Pacific shortfin makos are also slowly disappearing, according to the IUCN, though their population may be in better shape than their Atlantic cousins. The Monterey Bay Aquarium's Seafood Watch program calls shortfin mako from California and Hawaii a "good alternative" to more vulnerable options, but generally recommends against consuming shark.

Conservationists working to protect sharks are disappointed in the shark-eating craze being fueled by Shark Week.

"It's opportunistic," says Sean Van Sommeran, founder of the Pelagic Shark Research Foundation in Santa Cruz. "[Restaurants] are using the celebrity of sharkism to sell more tacos than they normally would."

Angelo Villagomez, with the Pew Charitable Trusts' Global Shark Conservation campaign, notes that the Atlantic shortfin mako's "vulnerable" IUCN rating is the same as that of the polar bear. "But you wouldn't want to eat polar bear tacos," he says.

In fact, some restaurants have specifically chosen not to serve shark during Shark Week because of customer concerns. The Lancaster Taphouse in Saskatchewan, for example, planned to serve mako shark last August. But an outcry on social media caused managers to turn tail and yank the item off the menu, according to CBC News.

In spite of declining populations, the number of shortfin mako sharks landed by fishermen has actually been on the rise since 2006. That year, American commercial fishermen reported catching about 222,000 pounds of the fish, according to the National Oceanic and Atmospheric Administration. By 2012, that figure had grown to nearly 389,000 pounds.

Catches of most other shark species are at all-time lows, according to Villagomez. He says this is not because of decreasing demand but decreasing shark numbers. "We've hit 'peak shark,' " he jokes.

Fishermen worldwide kill between 70 and 100 million sharks every year. Most are killed for their fins, which are sliced off the animals and, eventually, dried and used to make shark fin soup. Often, the rest of the carcass is thrown overboard.

While Americans seem to hunger more for shark during Shark Week, China has a much larger year-round appetite.

WildAid, a San Francisco group dedicated to marine protection, has been campaigning to curb the demand for shark fins in China. The efforts may be working. According to a WildAid report released Aug. 4, prices for shark fins are down about 50 percent in China, where fishermen are also receiving 80 percent less money for the product. And 85 percent of about 1,500 Chinese consumers surveyed online by WildAid said they'd stopped eating shark fin soup in the past three years, largely out of sympathy for sharks.

WildAid's founder Peter Knights says he isn't particularly bothered that a few American restaurants are serving shark meat, given the overwhelming global demand for their fins. In fact, Knights is more concerned about Shark Week itself.

"I think Shark Week does more damage to sharks than eating the occasional shark in a restaurant," Knights says. "Shark Week is all about vilifying sharks. They always have about 20 shows about shark attacks and none about what's happening to shark populations."

He adds: "It would be nice if people didn't start to desire shark meat as well [as their fins], but I guess if you're going to kill a shark, it's better to use 85 percent of it rather than one to five percent."