Accessibility links
California Drought Has Wild Salmon Competing With Almonds For Water : The Salt Thousands of Chinook salmon are struggling to survive in the Klamath River, where waters are running dangerously low and warm. Cold reservoir water is instead going to farms in the Central Valley.

California Drought Has Wild Salmon Competing With Almonds For Water

California Drought Has Wild Salmon Competing With Almonds For Water 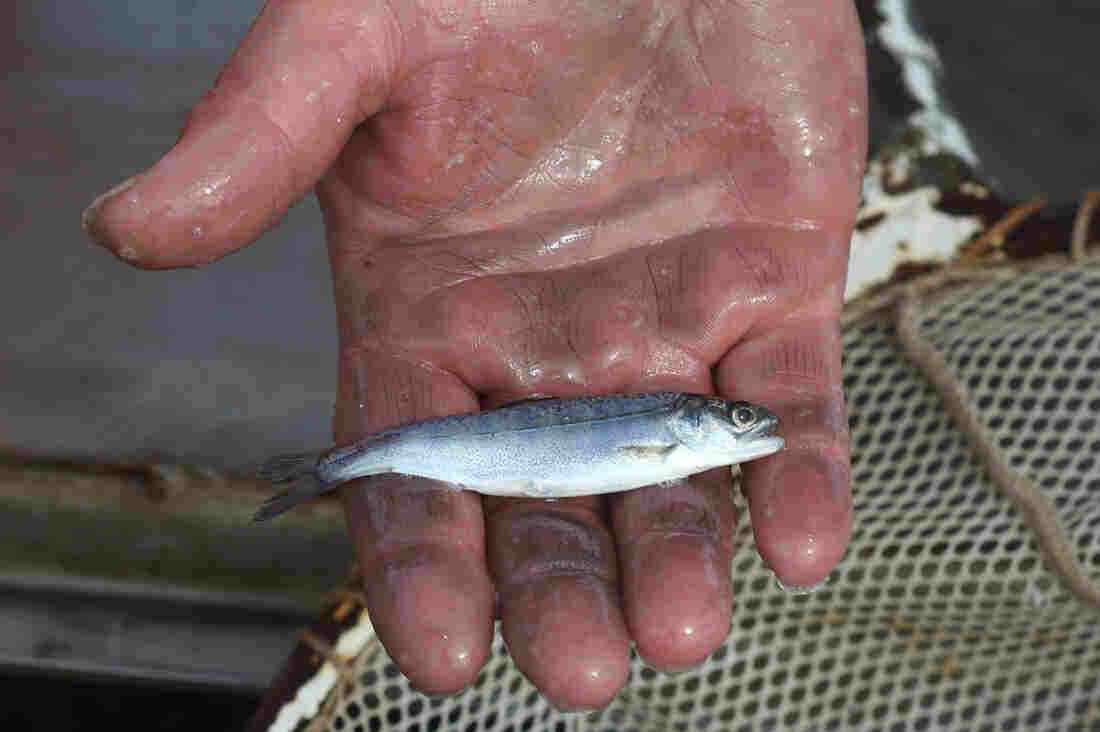 A young Chinook salmon, called a smolt, near Vallejo, Calif., on April 24, 2014. North Coast tribes and environmentalists fear that the smolts and Chinooks may not survive this year's low river flows and warm water. Rich Pedroncelli/AP hide caption 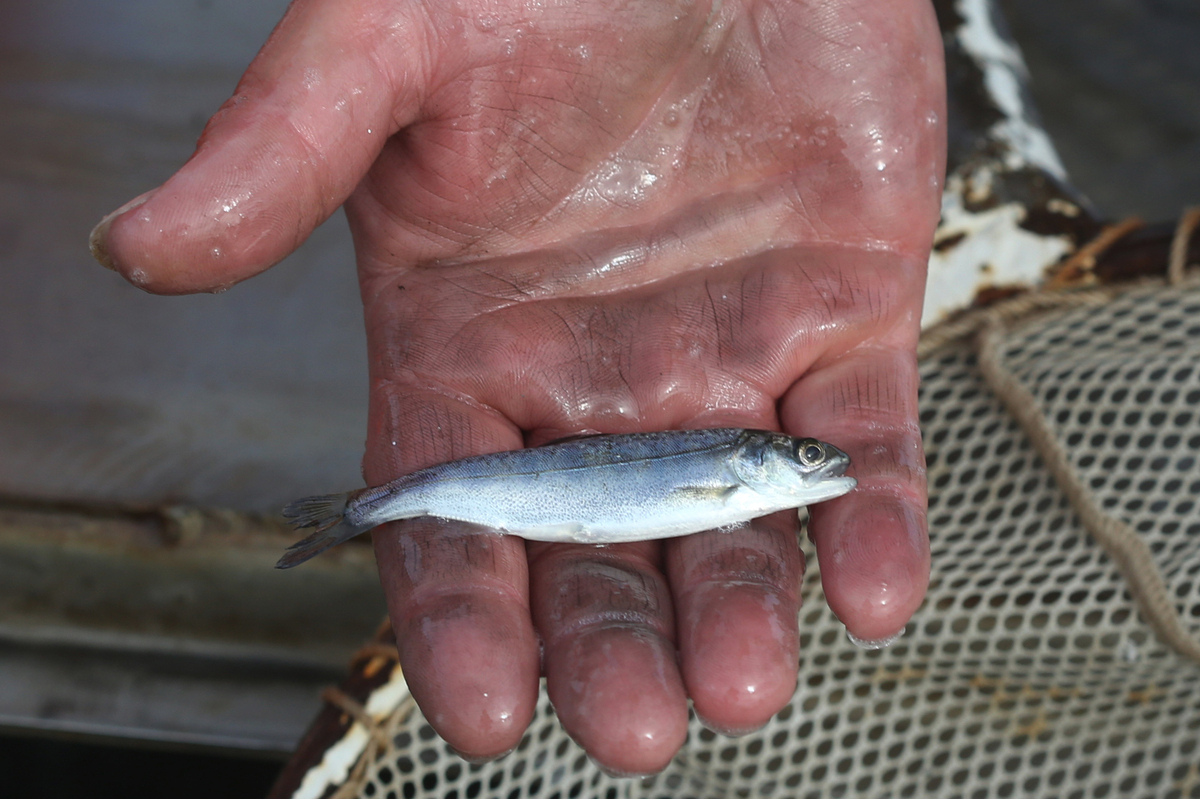 A young Chinook salmon, called a smolt, near Vallejo, Calif., on April 24, 2014. North Coast tribes and environmentalists fear that the smolts and Chinooks may not survive this year's low river flows and warm water.

The ongoing California drought has pitted wild salmon against farmers in a fight for water. While growers of almonds, one of the state's biggest and most lucrative crops, enjoy booming production and skyrocketing sales to China, the fish, it seems, might be left high and dry this summer—and maybe even dead.

Thousands of adult king, or Chinook, salmon are now struggling to survive in the Klamath River of northern California, where waters are running dangerously low and warm due to diversion of river flows into the Central Valley, an intensely farmed agricultural area. If more water isn't let into the Klamath River within the coming days, the salmon, which are migrating upstream toward their spawning grounds, could succumb to a disease called gill rot.

The disease, which played a role in the 2002 Klamath die-off of tens of thousands of Chinook, flourishes in warm water and is already creeping through the salmon population. Frankie Myers, a member of the Yurok tribe, a Native American group that lives in the Klamath River basin, tells The Salt about 1,000 salmon have already died this summer in a 100-mile stretch of river. Now, the remaining fish, which cannot survive in water much warmer than 70 degrees, are clustering in dense schools around the mouths of cold tributary streams, seeking relief from the sun-warmed river. 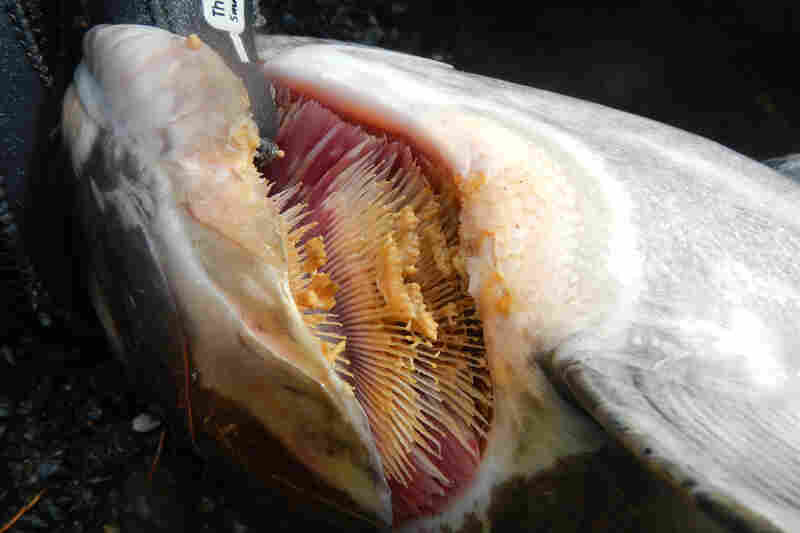 Gill rot in a dead fish taken from the Salmon River, a tributary of the Klamath River in California, on July 23, 2014. Courtesy of Melanie McPherson/Salmon River Restoration Council hide caption 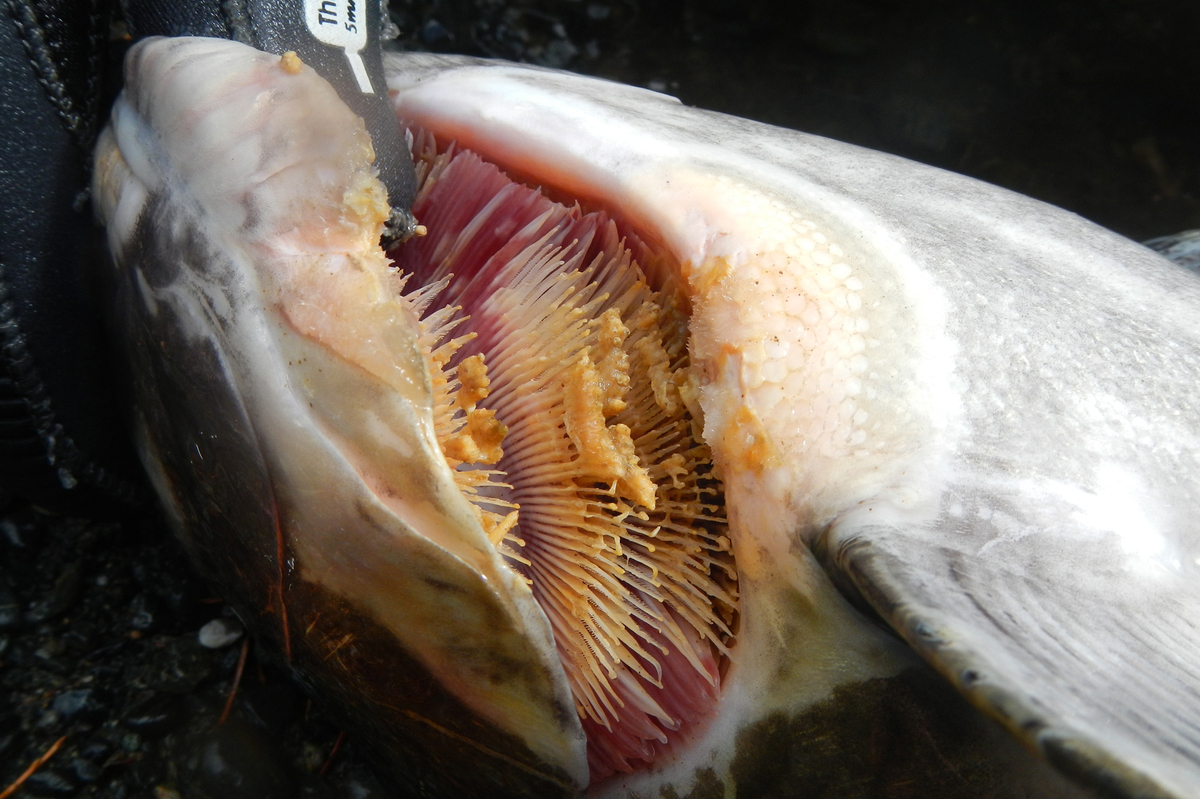 Gill rot in a dead fish taken from the Salmon River, a tributary of the Klamath River in California, on July 23, 2014.

Members of local tribes have pleaded with government officials to step in and help by releasing cold water from the federally managed Trinity Lake, a reservoir upstream of the salmon. This would chill the river, stop the disease in its tracks and allow the salmon to continue their spawning migration.

The problem is, most of Trinity Lake's water has been promised by government water managers to other users, including cities and industry.

On Tuesday, members of Klamath basin tribal groups convened in Sacramento to rally officials to save the Klamath's Chinook salmon. "For us, salmon is life," Chook-Chook Hillman, a 30-year-old tribesman who was at the rally, tells The Salt. "Without salmon, we'd might as well just pack it up as a people." Hillman says the regional director of the U.S. Bureau of Reclamation, which manages much of the state's water, promised in a private meeting that his agency would decide sometime Thursday whether or not to give the Klamath salmon more water.

The Klamath River flows into the Pacific Ocean near Oregon and is naturally separated from the interior regions of California by a coastal mountain range. But in the 1960s, the Bureau of Reclamation built an 11-mile tunnel connecting Trinity Lake to the Sacramento River basin to send Klamath-basin water to farmers in the San Joaquin Valley. Today, the arid valley is a major producer of the world's almonds, as well as other nuts and stone fruits, grapes and alfalfa.

But the North Coast tribal people question the fairness of a system by which crops hundreds of miles away depend on their river water at the expense of salmon.

"It's not our fault they have orchards to water in the desert, and it's not the fish's fault, either," Hillman says. "We shouldn't have to pay for that."

While the BOR technically has not allotted any water to farmers this year due to drought, producers in the valley whose supplies have been cut may still purchase water from others who didn't experience cutbacks. Others may tap into the state's shrinking groundwater reservoirs. One way or another, most fruit orchards receive the water they need each year.

Almonds are one of California's most important crops. The state produces 80 percent of the world's almonds, according to the CA Department of Food and Agriculture. Jenny Nicolau, a spokesperson with the Almond Board of California, says 68 percent of the state's almond crop is exported. Most of those almonds go to China. 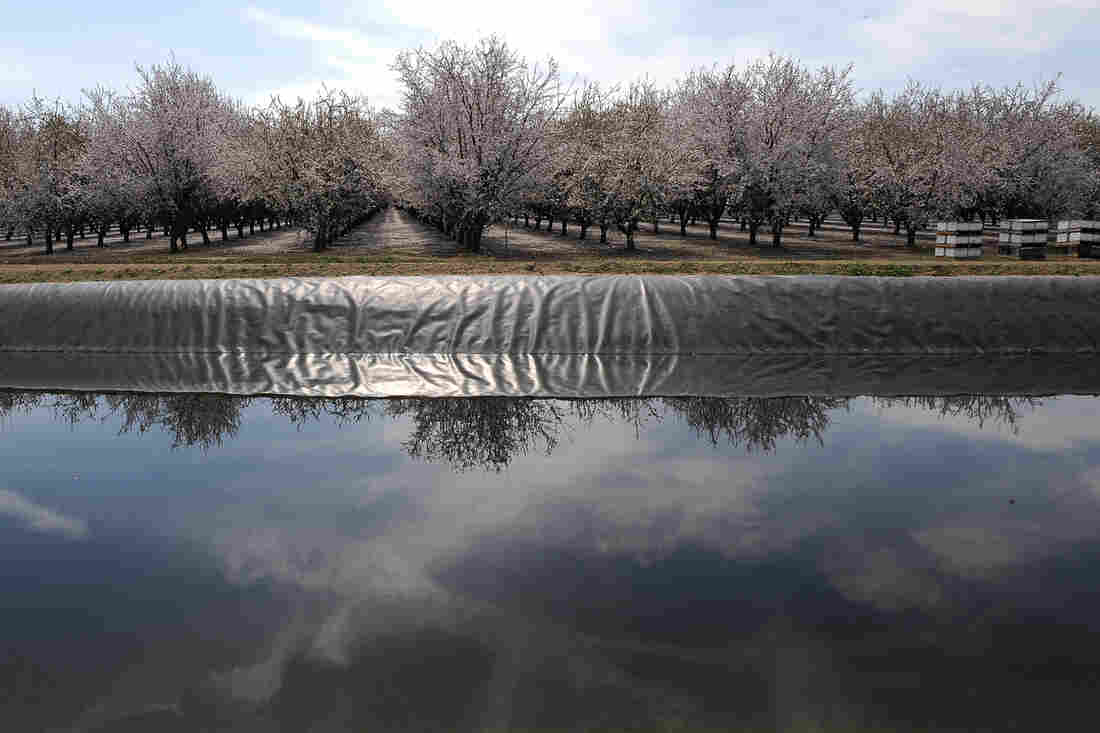 A field of almond trees is reflected in an irrigation canal in Firebaugh, Calif., in the San Joaquin Valley in 2009. The Almond Board of California says that in the past two decades, the industry has reduced its water consumption by 33 percent per pound of almonds produced. Robyn Beck/AFP/Getty Images hide caption 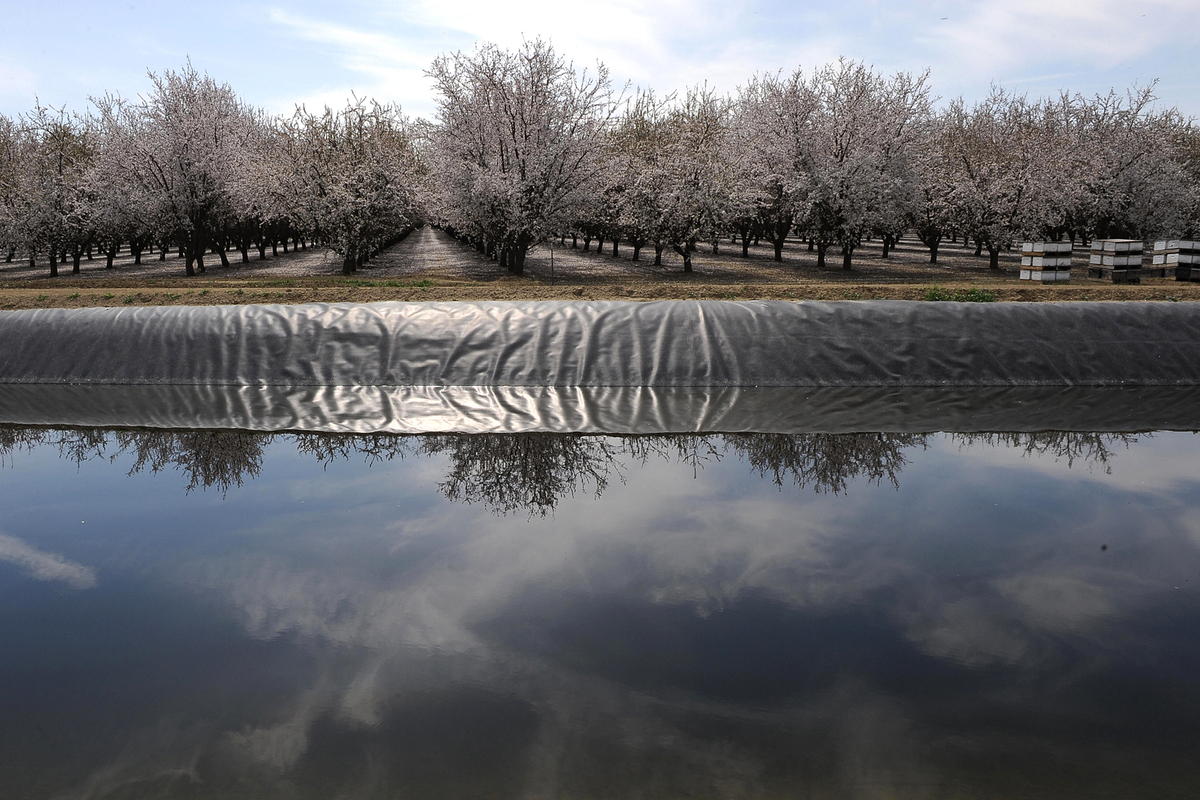 A field of almond trees is reflected in an irrigation canal in Firebaugh, Calif., in the San Joaquin Valley in 2009. The Almond Board of California says that in the past two decades, the industry has reduced its water consumption by 33 percent per pound of almonds produced.

From 2004 to 2013, California's almond harvest exploded from a billion to 2 billion pounds and record high production is forecasted for this year, in spite of ongoing drought.

Jenny Nicolau with the Almond Board of California says almond growers have learned how to use water more efficiently. In the past two decades, she notes, the almond industry has reduced its water consumption by 33 percent per pound of almonds produced. And while production has increased, the industry's water use has remained about the same for at least a decade. She says agriculture uses less than 50 percent of the state's water.

But David Zetland, a water policy analyst and author, says this is a distortion of facts. He tells The Salt that of all the state's water that is diverted from rivers and reservoirs, 80 percent ultimately lands in fields and orchards.

Decades ago, dams built to create reservoirs for agricultural use dented or killed most of California's salmon runs. Relatively healthy runs of Chinook salmon still spawn in the Sacramento and the Klamath rivers, though sustaining them involves a complex life-support system of hatcheries, transporting migrating fish in trucks and boats and constant monitoring of water supplies.

As of Aug. 20, the BOR was pumping about 2,100 cubic feet per second of water from Trinity Lake into the Sacramento River system, leaving just 430 cubic feet per second flowing into the Trinity River, a major tributary of the Klamath. Many of the salmon currently at risk are stranded below the confluence of these two rivers, which means higher releases from Trinity Lake could save them.

Janet Sierzputowski, a BOR spokeswoman, says the water currently being diverted from the Trinty-Klamath system is intended to benefit the Sacramento River's own salmon. After all, two of the Sacramento's four distinct salmon runs — the spring Chinook and the winter Chinook — are on the endangered species list.

But Zeke Grader, a board member of the Golden Gate Salmon Association, an environmental group, says the Bureau's claim is "nonsense." He explains that, by this time of year, the Sacramento's threatened spring run and endangered winter run Chinook are already too far upstream to reap any of the benefits of the cool Trinity Lake water, which flows into the Sacramento downstream of where Grader says the fish are now spawning.

"They're not [transferring Trinity water to the Sacramento] for the salmon," he says. "They're doing it for the almonds."

In a statement released on Aug. 19, the Bureau of Reclamation's regional director David Murillo said conditions affecting the health of salmon in the Klamath system would be "monitored on a real-time basis" and, if necessary, addressed with more water released into the river.

But real-time may not be fast enough. That's because it takes three to four days for water to flow from Trinity Lake to the region where the salmon are currently holding, according to Craig Tucker, the Karuk tribe's natural resources advocate.

"They're telling us they'll let water go once they see dead fish," Tucker says. "But once an epidemic starts, it's hard to stop."

For Myers, the government's reluctance to save the salmon his tribe depends on comes as yet another blow to their embattled traditions.

"Not only are they asking the Native Americans to sacrifice their culture, but we're doing it so we can sell almonds to the Chinese," he says.

UPDATE, Saturday, Aug. 23: The U.S. Bureau of Reclamation announced Friday it would increase the amount of water released from Trinity Lake into the Trinity River, a Klamath tributary, from 450 cubic feet per second to 950 cfs. On Monday morning, the flows will be elevated again to 2,500 cfs and maintained at that level until at least mid-September, according to a statement from the BOR. Water diversions from Trinity Lake into the Sacramento River basin will not be reduced, however, the BOR said. That means Trinity Lake's already diminished water supply will disappear rapidly this summer and fall. If the current drought persists, there may not be enough water in the reservoir next year to both satisfy farmers and sustain salmon runs.

A previous version of the story incorrectly reported the amount of almonds that California exports. In 2013, it was 68 percent.