Accessibility links
Bronx Baker Turns Dominican Cakes Into A Sweet American Dream : The Salt An immigrant who mastered the art of the Dominican-style cake is baking up a business in her New York City neighborhood. And she is spreading Caribbean culture along with her frosting. 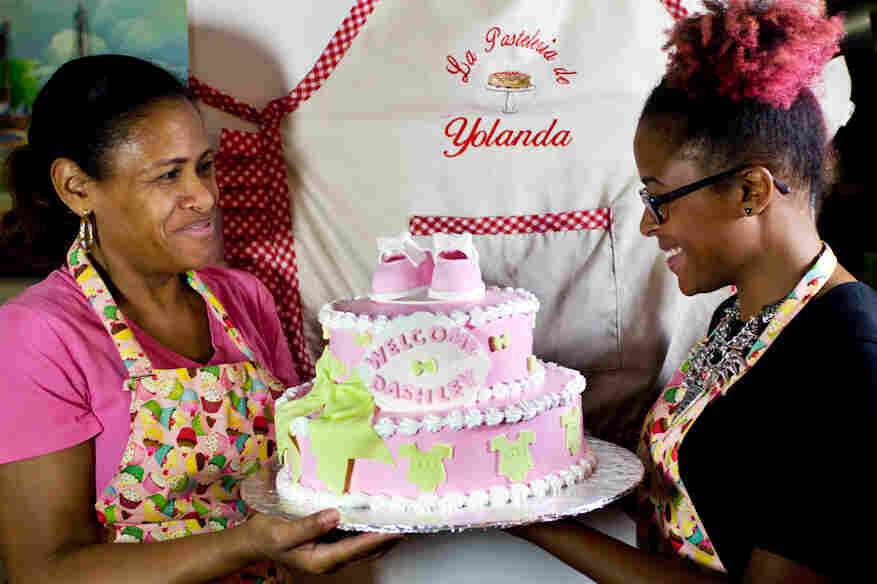 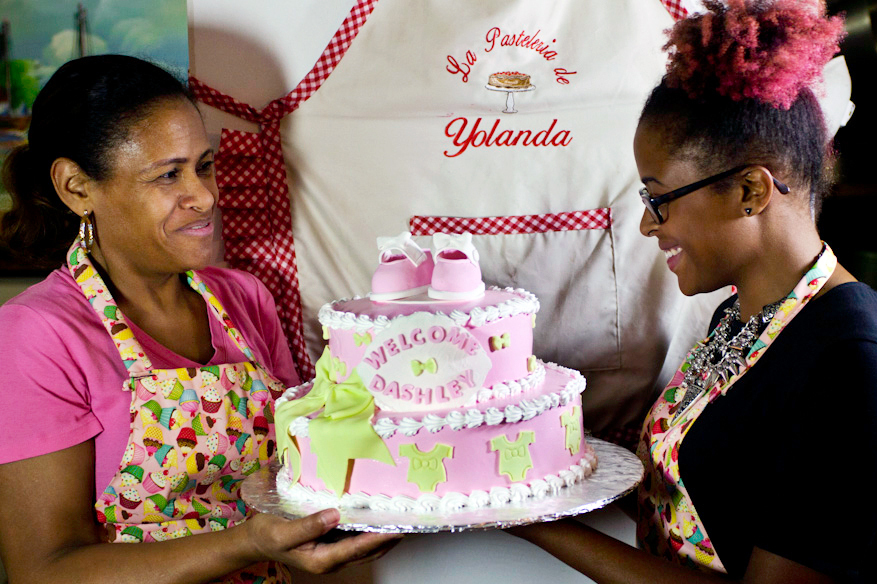 Yolanda Andujar and her daughter Astrid bake together every weekend. Andujar primarily makes the cakes while Astrid, a graphic designer by day, makes elaborate decorations using fondant and bright colors.

Néstor Pérez-Molière/Courtesy of Feet in 2 Worlds

For many immigrants arriving in the U.S., opening a family food business can be a pathway to economic stability. While many fail, one Dominican woman in the Bronx has managed to get her family off food stamps, send her kids to college and share her heritage with new friends and neighbors. And it all started with cake.

Not just any cake — but bizcocho Dominicano, flavored with rum and vanilla extract, and layered with tropical fruit spreads and meringue.

On a typical weekend, Yolanda Andujar, 50, fills orders for a dozen or so cakes, ranging in size from 6 inches to 3 1/2 feet across. Some are basic birthday cakes, and others are extravagant fondant creations shaped like Disney cartoons. She's the owner of Yolanda's Cake, a home business that deals solely in Dominican cakes. 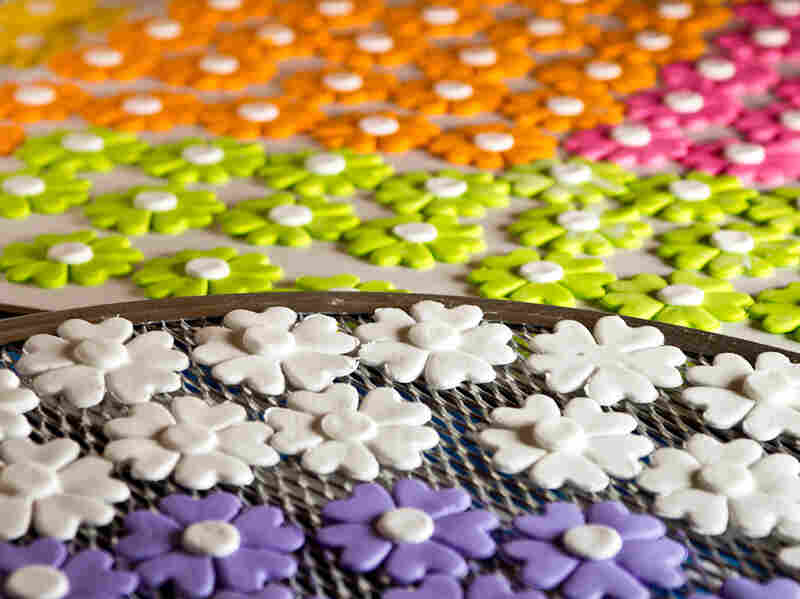 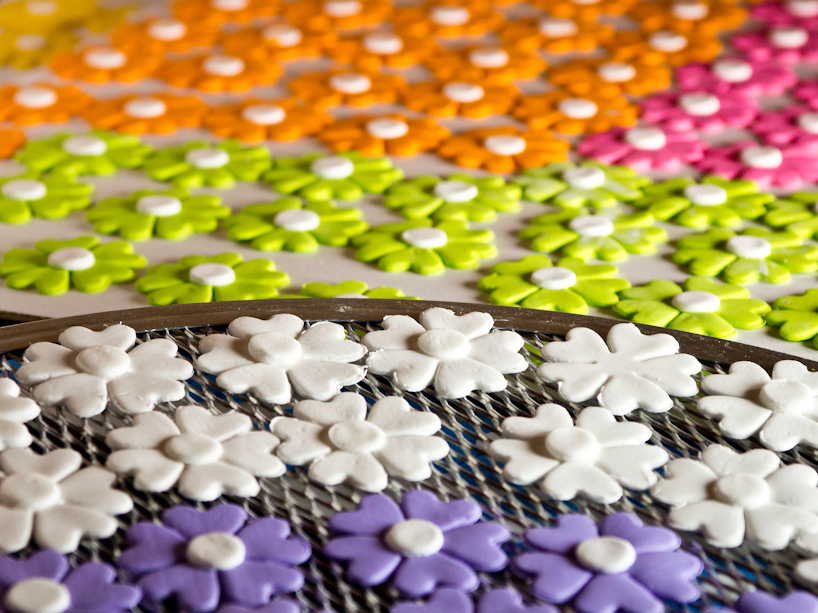 Néstor Pérez-Molière/Courtesy of Feet in 2 Worlds

When Andujar arrived in the Bronx 12 years ago with her husband and three children, they struggled to get by and eventually went on public assistance and food stamps — until Andujar revived an old business that hadn't quite worked back home in the Dominican Republic.

"In DR, I took cake-making classes at a Howard Johnson in San Pedro," she says in Spanish. "I tried to sell my cakes, but the electricity would go out all the time, and I would have to run out to a friend's house to finish the icing. And sometimes my gas would go out, and I'd have to take the cake molds, still hot, in the trunk of my car to another friend's house to finish them."

In 2007, Andujar started freelancing at local bakeries. Then she started making cakes in her family's two-bedroom apartment in the Bronx. She had three standard KitchenAid mixers, a basic oven and just barely enough space for cakes to sit cooling on every surface.

Demand grew, and the family moved to a larger apartment. Andujar's husband turned their tiny dining room into a bakery. 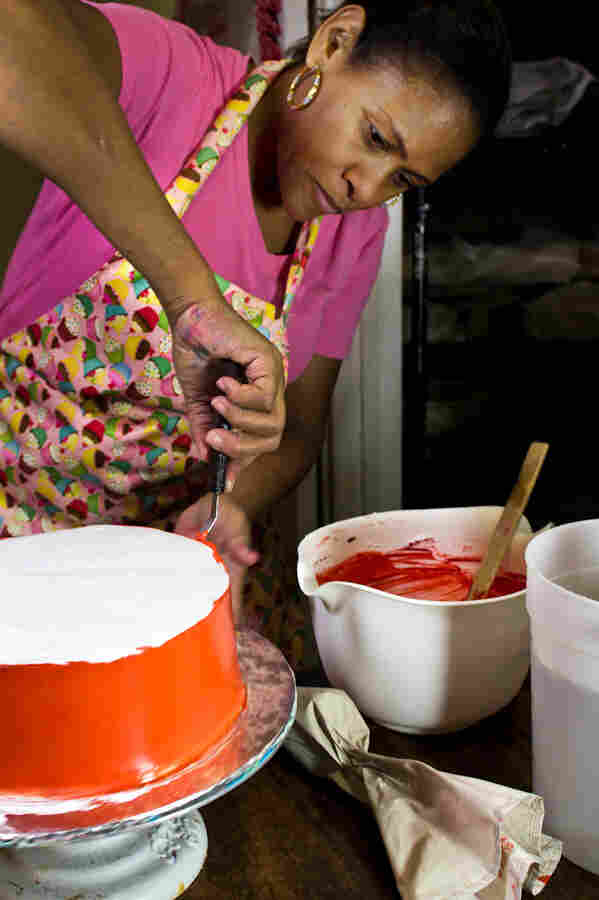 Andujar, adding the fruit filling to her cake. Néstor Pérez-Molière/Courtesy of Feet in 2 Worlds hide caption

Andujar and her daughter Astrid, 24, work side by side every weekend; Andujar handles the baking, and Astrid does the cake design. Together they make delicate fondant accents, such as thumb-sized elephants for a baby shower cake, or more elaborate designs, such as a Louis Vuitton handbag.

There's no space for an extra fridge in the apartment, so everything is baked fresh to order. The cake itself is a basic yellow cake, flavored with Dominican Brugal rum and imported white vanilla extract. Then it's layered with guava, mango, pineapple, Andujar's signature tropical fruit blend or rich dulce de leche.

Astrid never gets tired of cake. "I definitely still eat cake. If there's cake, I'm eating it. If there are pieces of cake left over, the corner of a square cake we had to make round, I'm eating it — with ice cream. The frosting — I will sit here and eat it with a spoon. Because it's delicious," she says.

That frosting is suspiro Dominicano, a firm, lightly sweetened meringue that spreads as smoothly as buttercream but is lighter and fluffier. It's made of water, sugar and egg whites.

"The tropics are too hot for buttercream, and so it's not our custom to use it. We grew up with suspiro. We used to make it by hand with a fork in a bowl. We would eat it right out of the bowl — I grew up doing that," Yolanda Andujar says.

Andujar doesn't yet have an official license for Yolanda's Cake, though she intends to get one soon and already pays taxes on her earnings. In a good week she earns up to $2,000 before taxes and expenses; in a bad week she'll still bring in $400, she says.

She knows at least 10 other Dominican cake bakers in the neighborhood.

There's never been an official survey on New York's informal Dominican cake industry. But Jessamyn Rodriguez, founder and director of Hot Bread Kitchen, a food business incubator for startup chefs, says informal home bakeries like Andujar's are common in New York neighborhoods with high economic disparities and large immigrant communities. Eighty percent of them are women, and 65 percent are foreign-born, she says. They don't always succeed.

"Nobody is going around busting up home cake bakers," Rodriguez says. But they do face many challenges. "It's hard work; there's no security, no retirement or benefits."

Despite the risk, Andujar says she has more business than she can handle and many longtime customers.

"I'm making something that I learned [in the Dominican Republic], and I'm also spreading the culture. I have clients who are black, white, from El Salvador, Ecuador, Puerto Rico, Chinese, Peruvian," she says. "I stay connected to my culture through my cakes."

Von Diaz is a New York-based journalist and multimedia producer, and a production assistant at StoryCorps. She focuses on Latino culture, immigration, LGBTQ issues and food.

This story was produced in collaboration with Feet In 2 Worlds, an immigration journalism project of the Center for New York City Affairs at The New School. The photo essay on Yolanda's Cake is available on the Feet In 2 Worlds website.