Accessibility links
Colorado's Pot Brownies Now Come With Instructions : The Salt Colorado is rolling out regulations for the edible-marijuana sector, including "emergency rules," which spell out serving sizes. But for now, most of the dosage education is falling to pot shops. 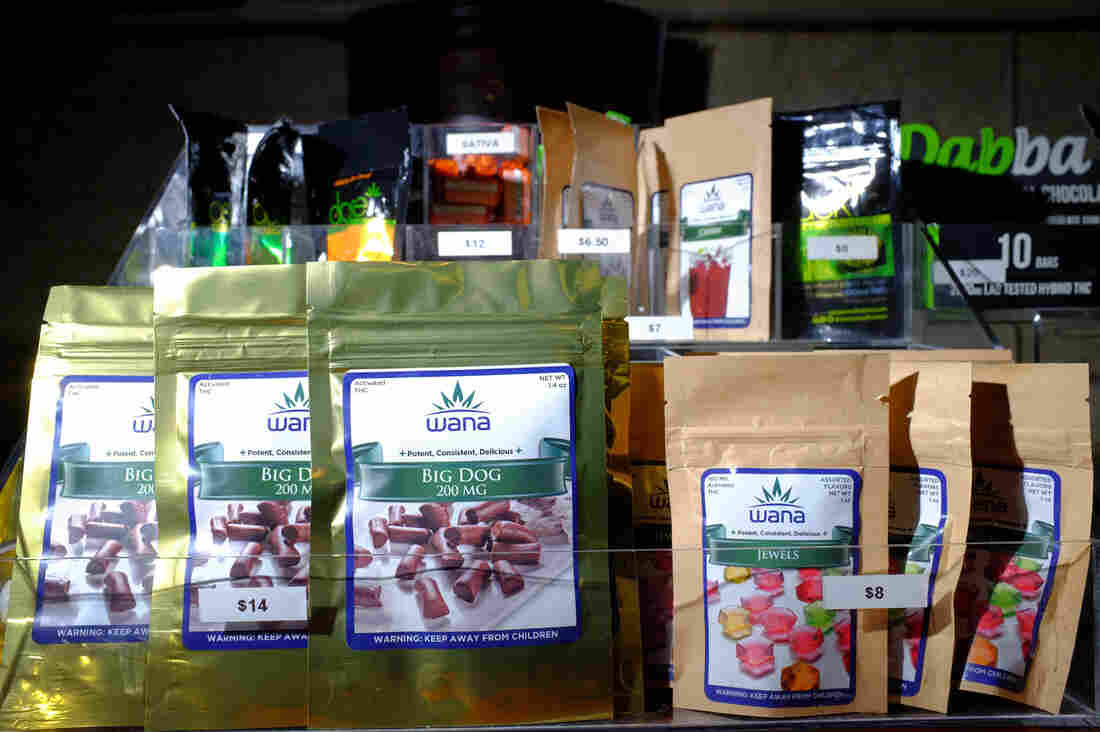 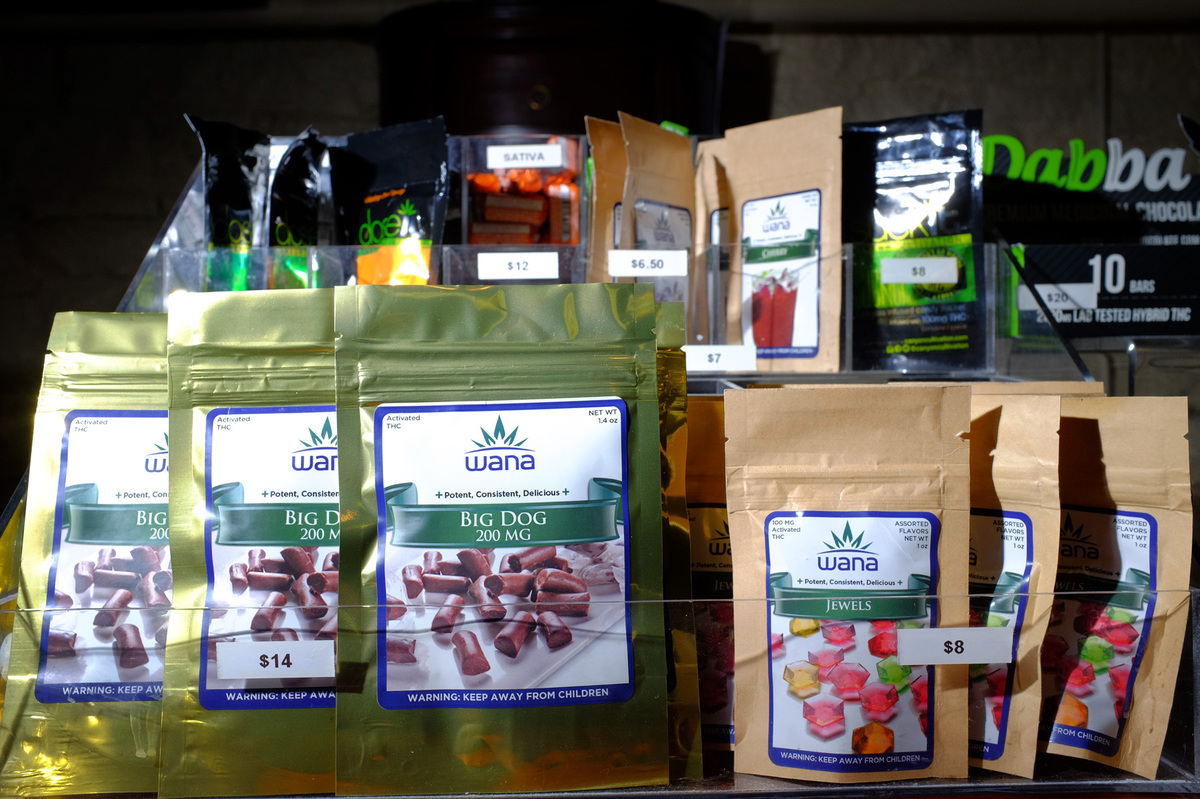 When Colorado legalized recreational marijuana use earlier this year, it also opened the door for food products infused with the psychoactive ingredient, THC, to anyone over the age of 21. That means bakers and food companies now have to ensure new products aren't contaminated with foodborne pathogens. And they have to make sure they're not falling into the hands of children or are too potent to eat.

While public policy think tanks like the Brookings Institution have praised state regulators and legislators for their handling of legal marijuana so far, problems with potency in edible products have made headlines and turned into public relations headaches for the marijuana industry.

Some eager, inexperienced consumers have overindulged on the pot-infused food and then shown up in emergency rooms sweating and paranoid. Edibles were linked to the death of a Wyoming college student in Denver.

"There's been anecdotal evidence that some of the new consumers in the legalized market were not very well informed in terms of how to safely take that product," said Lewis Koski, Colorado's marijuana enforcement director.

But that's not for lack of information on labels. State law requires specific information on all marijuana packages. In addition, Colorado has been rolling out rules for the edible-marijuana sector in batches for almost a year now.

Regulators dropped a big set of what they call "emergency rules" on Aug. 1, which spell out serving sizes limited to 100 milligrams of THC per product, and, new warning labels.

But adding even more notes to packages of THC-infused chocolate and granola bars isn't likely to increase safety, Koski said. 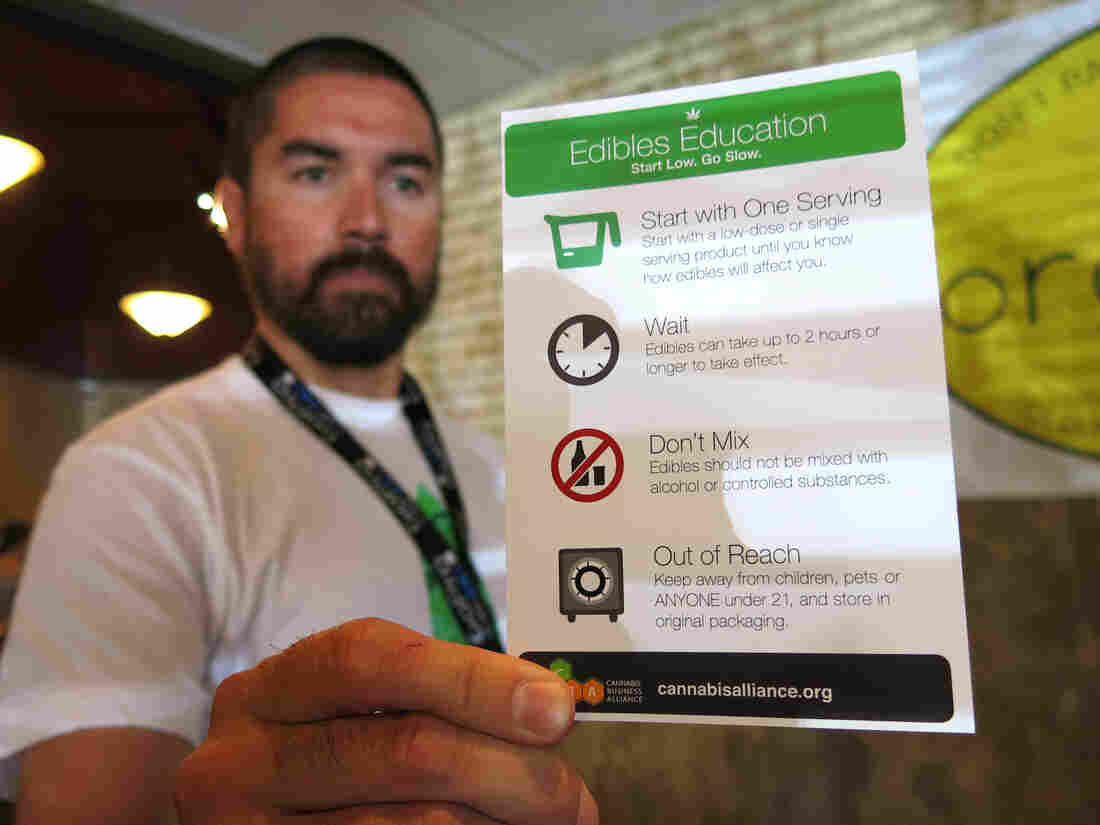 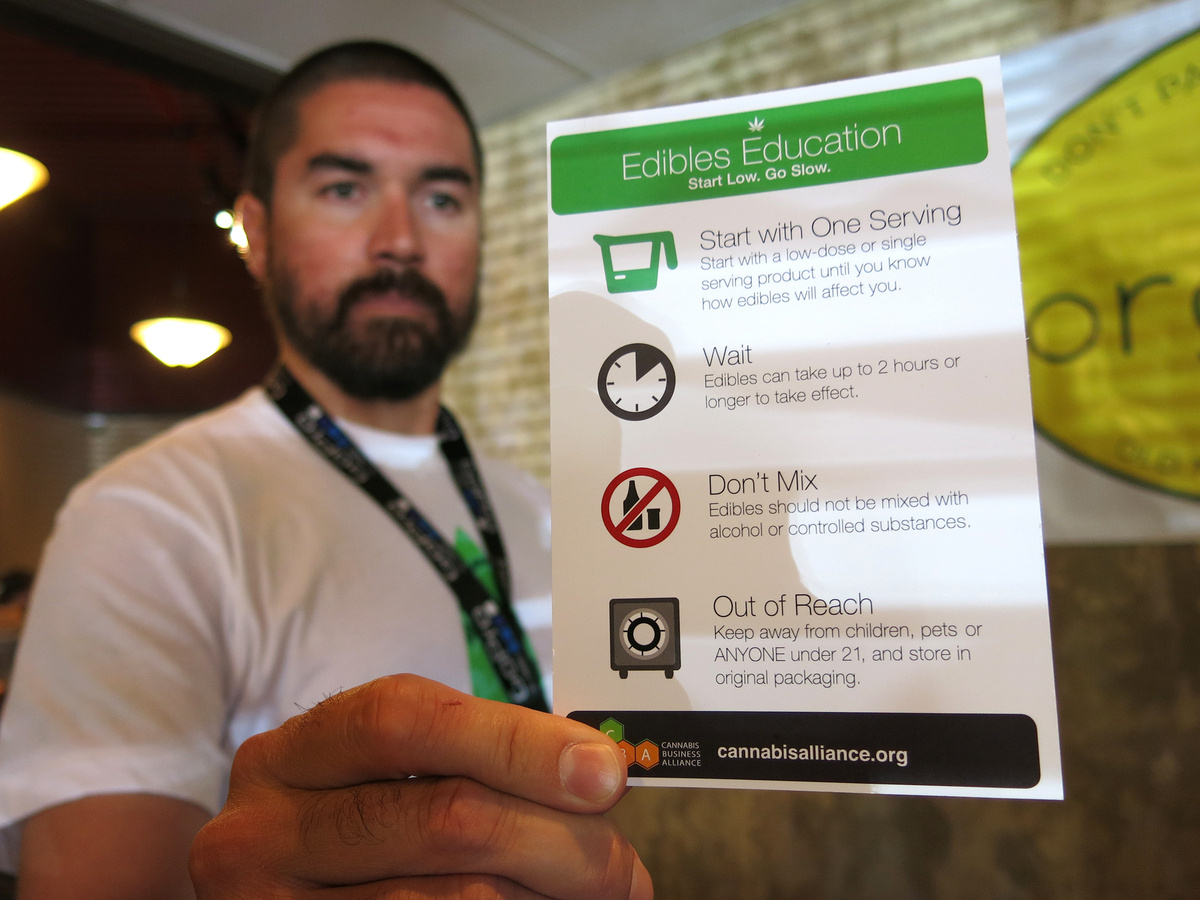 Maka Kalaí, the manager of Organic Alternatives, a recreational and medical marijuana store in Fort Collins, Colo., hands out edibles education cards with each purchase.

"If you continue to put other warnings on there, you have to really question whether or not that becomes effective as a means to really educate a consumer," Koski said.

So for now, most of the dosage education has fallen to the pot shops themselves. Brendon Greney works behind the counter at Organic Alternatives, a recreational and medical marijuana store in Fort Collins, Colo. Greney is a "budtender," as in marijuana flower buds. Even though labels are packed full of information, Greney says most people don't read them. He views himself as an educator.

For instance, when a customer asks about orange-flavored THC-infused liquids in little spray bottles — like a breath freshener — Greney walks him through an appropriate dose.

The Latest Food Truck Theme Is Marijuana For Lunch

"I don't know what your tolerance is," Greney says to the customer. "It varies by the individual and metabolism. But 10 milligrams is what we recommend."

The shop is filled with other items, too — granola bars, lollipops and gummy bears. Many edibles stick to the sweets, with candies and chocolates dominating store shelves. But as marijuana acceptance spreads, entrepreneurs are testing the limits of consumer tastes. A pop-up food truck has dished out THC-infused pulled pork sandwiches.

"This is fun. It should be fun," says Greney. "And I think it's safe if consumed and used the right way. ... It's not some scary back alley thing."

Organic Alternatives is fielding questions from customers all over the globe. Open for recreational sales since the end of June 2014, the store has already had visitors from all seven continents. Yes, even Antarctica. The store says a researcher based at a substation there recently stopped by.

"It's really our job and our responsibility to educate them and let them know, this is a lot different than what your friend made in the '60s," says Organic Alternatives manager Maka Kalaí. That's why the staff hands out industry-developed edibles education cards with every purchase, telling consumers to "Start Low and Go Slow."

It's in the best interest of marijuana food manufacturers to make sure first-time consumers have a good experience, says Monique Nobil, director of marketing for Julie and Kate Baked Goods, a Denver-based producer of THC-infused granola. The company sells its granola packages with the cards included, as well.

"You want to do it in a way that's responsible," Nobil says. "So that you know your end product is what you say it is. And so your consumer knows exactly what it is."

The relatively young industry of edible marijuana manufacturing is still learning lessons in professionalism and good business practices. Before Jan. 1, these food companies operated in a legal gray area in Colorado, serving medical marijuana patients, not the general public. Now they have to think about new concerns like food safety.

In a Denver conference room, that transition from underground market to a more established, respected one is on display. It's set up like a classroom. The students all have one thing in common: They're making, testing and selling edible marijuana.

"Today is not a cannabis cooking class. It's about food safety," ServSafe trainer Maureen McNamara tells the room. ServSafe is a food safety training program used widely in the restaurant and hospitality industry.

For years, McNamara taught kitchen workers how to wash their hands and keep food at the right temperature. But just recently she started a side business to pass along the same information to people making food infused with THC, calling her enterprise "Cannabis Trainers," with classes on food safety and proper in-store education for budtenders.

Trainings like McNamara's are mandatory for pot-infused-food preparers. Edibles-makers also have to test their products for potency, molds and foodborne pathogens. Any violations handed out by the state could put them out of business.

With the drug still illegal at the federal level, Colorado is wading into uncharted regulatory territory.

"This is the direct result of taking a product that used to exist on the underground market and putting it into a legal, regulated one," said Taylor West, deputy director of the National Cannabis Industry Association.

"Now we have the impetus to do things like trainings to be sure that everything is being handled in a professional manner," West says. "You don't have that in an illegal market."

Creating a legal, regulated market, though, has presented some challenges. Regulators worried pot candies would appeal to children, so they mandated all foods be sold in child-resistant packages. Washington state, also working to establish rules for a recreational-marijuana industry, has banned marijuana-infused candies but allows baked goods and bottled drinks.

While Colorado and Washington attempt to create standards for the recreational-marijuana sector, other states are watching closely.

"I would think for any state that is looking to go down that path, they'd be crazy not to look at Colorado and look at the successes and look at the places where we've had to tweak things," West said.

Runyon reports for KUNC and Harvest Public Media, a reporting collaboration that focuses on agriculture and food production.