Accessibility links
There's Much More To Apples Than Meets The Eye : The Salt Growing up, I knew two kinds of apples: red and green. Then I started dating an apple enthusiast and discovered we are in the midst of a rare apple renaissance. 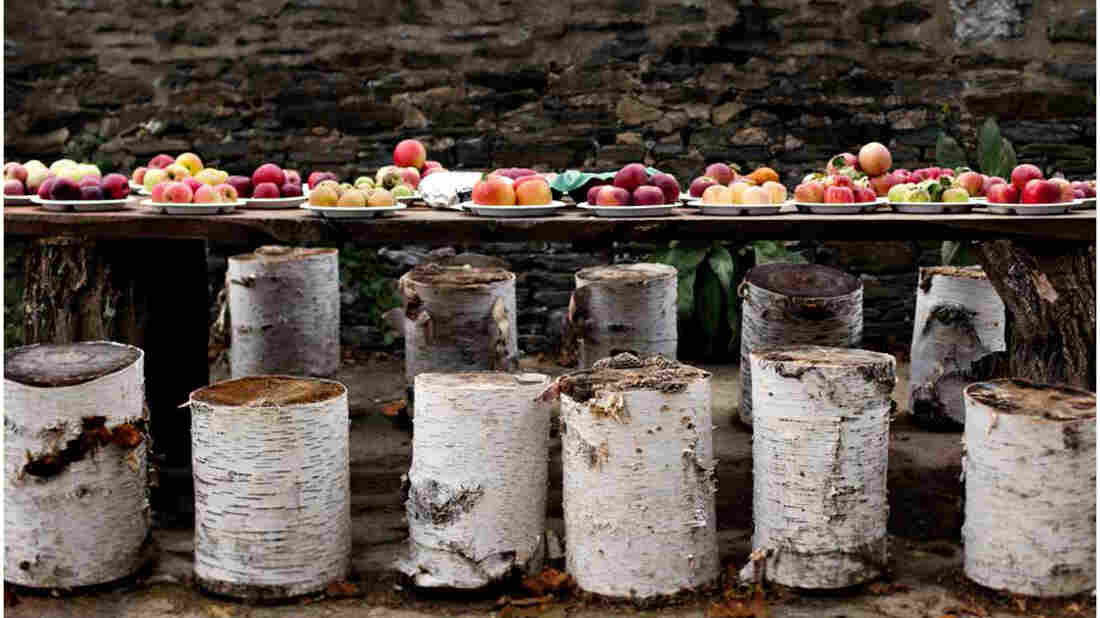 Have a seat: a sampling of varieties from Apples of Uncommon Character. Clare Barboza/Bloomsbury hide caption 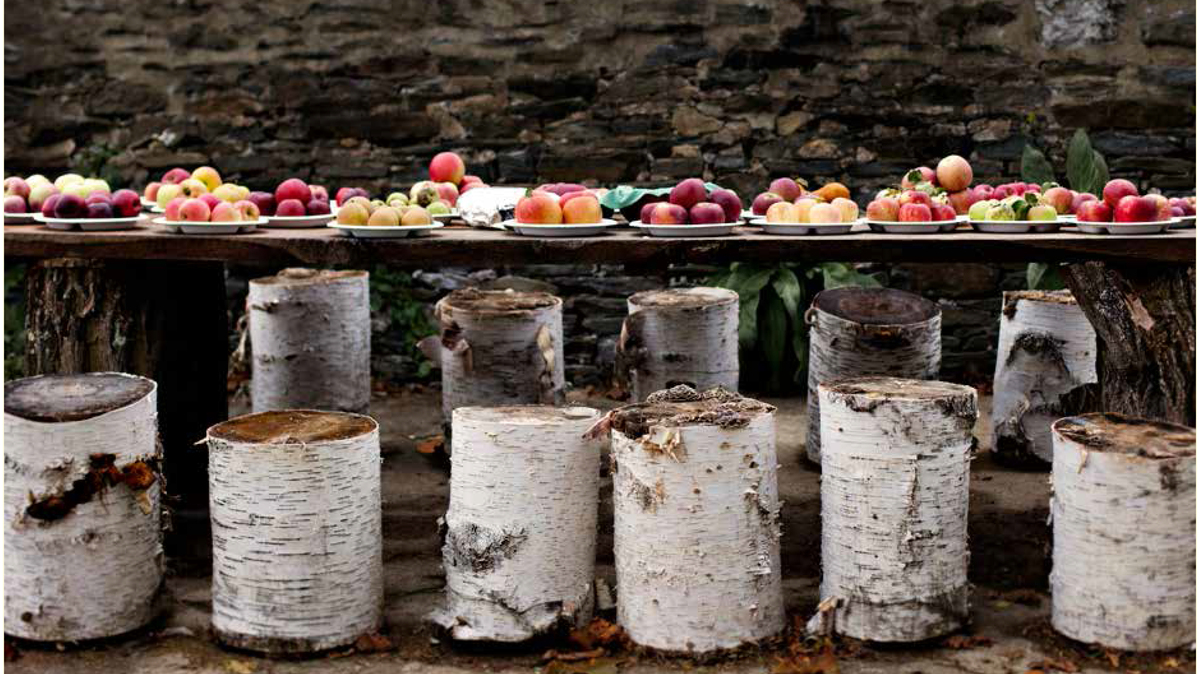 Have a seat: a sampling of varieties from Apples of Uncommon Character.

One of my favorite Far Side cartoons shows four triumphant cavemen with a giant carrot hoisted onto their shoulders, with the caption, "Early vegetarians returning from the kill."

That's kind of what it looks like every autumn weekend when my better half, Dan, comes home from the farmers market with a half-bushel of apples balanced on his shoulder.

Dan is really into apples. On one memorable "date" a few years ago, we attended a rare apple tasting in Santa Cruz run by the Monterey chapter of the California Rare Fruit Growers. "Really?" I asked. "A rare apple tasting? Is that even a thing?" Indeed it is. 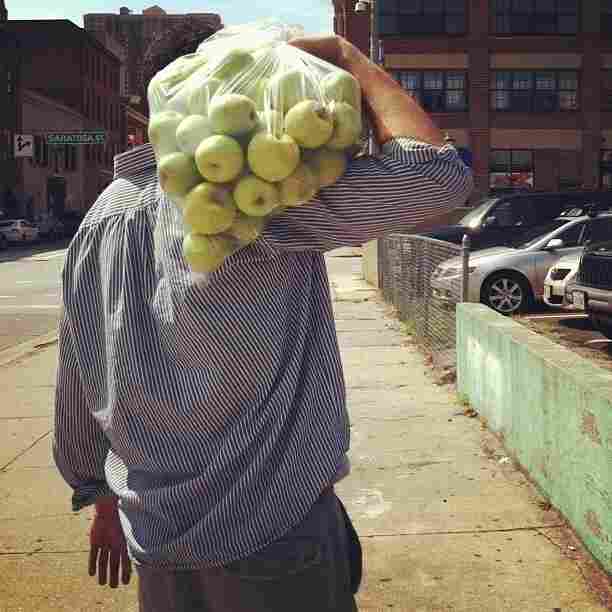 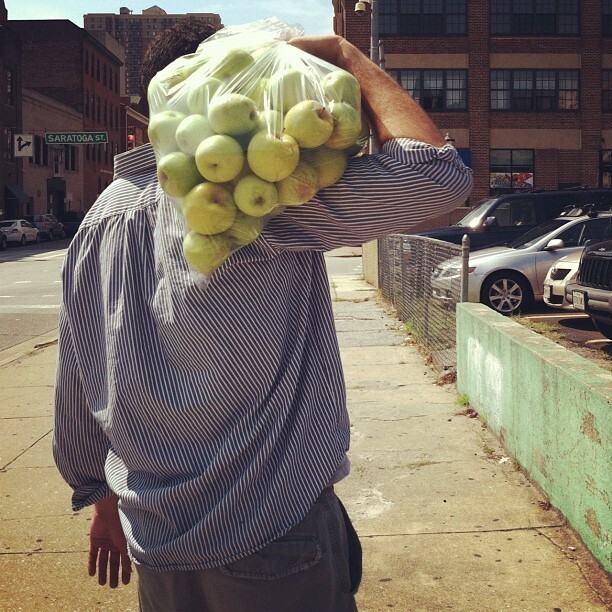 We buy in bulk.

When I was a kid, I knew about two kinds of apples: red and green — and I wasn't all that excited to find either of them in my lunchbox. Who wanted a piece of fruit when the other kids had those little containers of crackers and "cheese product" with a red plastic stick for easy spreading? (You know the ones.)

But in Santa Cruz we joined a gaggle of rare-fruit enthusiasts to taste 71 different types of apples, and I realized that I hadn't been giving the apple enough credit. There were dozens of varieties here. These apples had completely ridiculous names like "Brushy Mountain Limbertwig" and "Karmijn de Sonnaville" and "Tydeman's Late Orange" and "Belle de Boskoop." Some were such a deep, dark red that they looked like plums. Others, when you sliced them, revealed pale pink insides.

It was eye-opening. And despite a steady drizzle, we spent a happy afternoon nibbling on little bites of cut-up apples and finally settling on our own favorite, the "Reinette Rouge Etoilee."

If there isn't a rare apple tasting coming up in your future, here's the next best thing: food writer and self-described "apple stalker" Rowan Jacobsen's new book, called Apples of Uncommon Character: 123 Heirlooms, Modern Classics, and Little-Known Wonders. It's a who's who of apples — 123 "portraits," organized into categories like "Dessert Apples," "Cider Fruit" and "Oddballs."

Jacobsen makes the case that the apple renaissance we're enjoying now is actually The Second Age of the Apple. He says the first started back in the early 1700s, when seeds brought over from Europe by colonists multiplied like crazy in America. Unlike other fruits, apples "don't need us at all," Jacobsen writes. "They will run rampant through any temperate environment, metamorphosing endlessly." 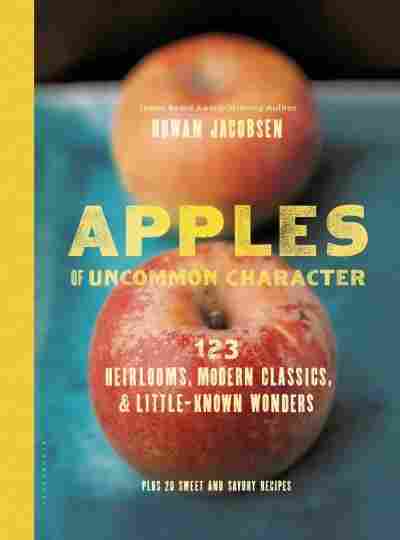 Settlers began grafting the very best of those trees — snipping a shoot off one tree, fusing it onto another, and ending up with a clone of the original. "Every Granny Smith," Jacobsen tells us, "stems from the chance seedling spotted by Maria Ann Smith in her Australian compost pile in 1868."

The First Age of the Apple included Thomas Jefferson, who focused on four varieties of apples at his Monticello plantation — Esopus Spitzenburg, Newtown Pippin, Hewes Crab and Taliaferro. "They have no apples here to compare with our Newtown Pippin," Jefferson wrote disparagingly, from Paris, of European fruit.

The apple's biggest break came when Americans began to move west, Jacobsen explains. John Chapman (whom you might know better as Johnny Appleseed) helped establish nurseries in Ohio, Pennsylvania, Indiana and Illinois. It was a time of tremendous growth and experimentation; according to Jacobsen, there were some 7,500 American apple varieties.

But it wouldn't last. The 20th century brought with it industrial-size orchards feeding national distributors who did not care to work with smaller farms or their "inconsistent" apples. Only a handful of apples — of the thousands once available in the 19th century — ever made it to the modern supermarket, Jacobsen says. The omnipresent Red Delicious apple was bred more for color than for taste: "American consumers brought this disaster upon themselves by consistently choosing the redder apple over the tastier one," he laments. Those are the ones I knew, until Santa Cruz.

That apple tasting was just a part of a larger movement focused on celebrating and saving these rare varieties before they die out.

John Bunker, founder of Fedco Trees, played a critical role in this second movement, Jacobsen says. He posts "Wanted" posters in towns in search of hard-to-find apples. Bunker has saved some 80 apple varieties that otherwise might have been lost.

It feels a little bit like Facebook for fruit — profile photos taken from the most flattering angle, and a rundown of basic biographical data — origin, appearance, flavor, texture, season, use and region.

A growing market for different kinds of apples has also spurred innovation from the apple industry. Jacobsen points to Gala and Honeycrisp as "recent stars of the produce aisle" that — though sometimes maligned by heirloom apple connoisseurs — he suspects would have been a hit among early American settlers. That said, there's concern that "focus-grouped" apples are being cast in Honeycrisp's image — sweet, crispy and juicy, but without much nuance. 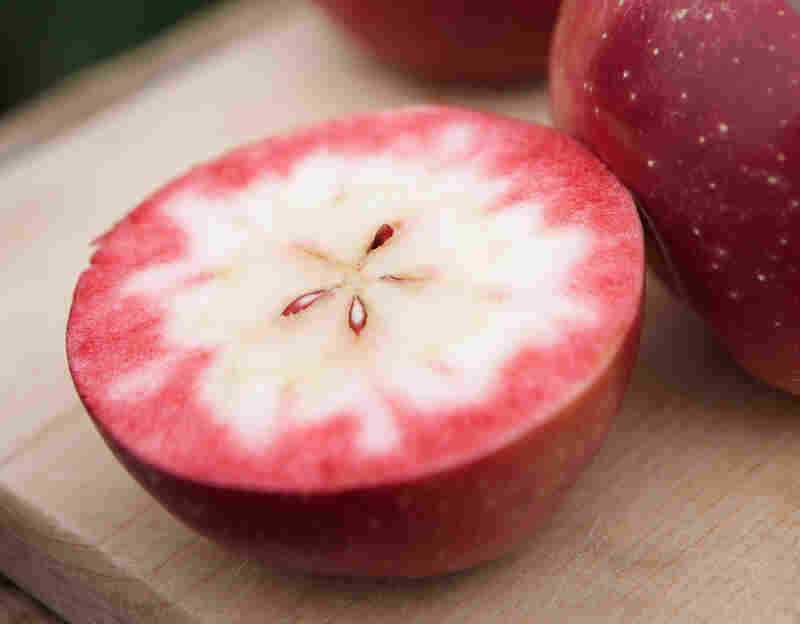 Surprise! This is what it looks like when you cut into a Redfield apple. Clare Borboza/Bloomsbury hide caption 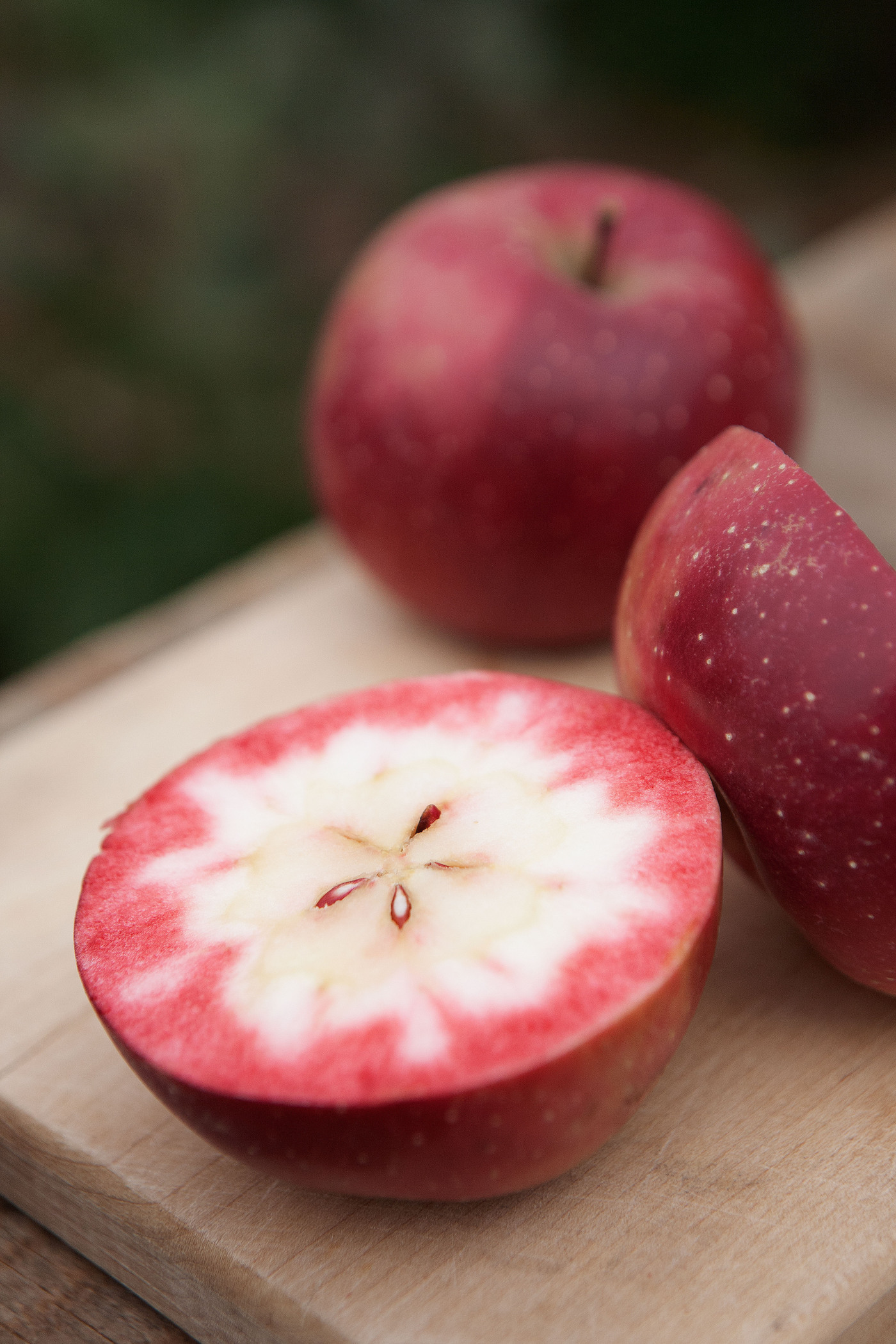 Surprise! This is what it looks like when you cut into a Redfield apple.

The book also includes 123 apple biographies, with each fruit described and documented in loving detail. It feels a little bit like Facebook for fruit — profile photos taken from the most flattering angle, and a rundown of basic biographical data — origin, appearance, flavor, texture, season, use and region. (Of course, there's some good gossip, too — like how Golden Delicious "sired" Jonagold, Mutsu, Gala, Pink Lady and many more).

You'll also find some fun facts in the short essays that accompany each variety. Remember fictional Vietnam vet and general badass Rambo? First Blood author David Morrell got the idea for his character's name from Summer Rambo, an apple his wife bought from a farm stand. The apple that helped 22-year-old Isaac Newton come up with his theory of gravity in 1666? It was a Flower of Kent.

There are some more useful tips as well — Jacobsen advises readers on which apple to put in a strudel (Glockenapfel) and which apple to eat with a slice of cheddar cheese (Westfield Seek-No-Further).

And in a 300-page book devoted entirely to one fruit, there are some fairly creative descriptions, such as, "Like the Incredible Hulk, Mutsu is huge, green, and strangely lovable." And, "Granite Beauty is like the Charles Bukowski of the apple world. It gives the feeling of dissolute existence brought on by life too deeply felt."

When you reach the end of the profiles, you'll find 20 applecentric recipes, a glossary of apple terms, and resources for "apple geeks" — like mail order trees, mail order fruit, cider-makers and annual apple festivals.

Speaking of apple festivals, don't be surprised if you run into Dan and me at the Monticello Apple Tasting in late October.

For Paul Cezanne, An Apple A Day Kept Obscurity Away