Accessibility links
Across The Country, Fast-Food Workers Rally For $15-An-Hour Pay : The Salt Union organizers say workers need a liveable wage and that the campaign to win them is gaining momentum, but the industry says higher wages would increase the cost of fast food. 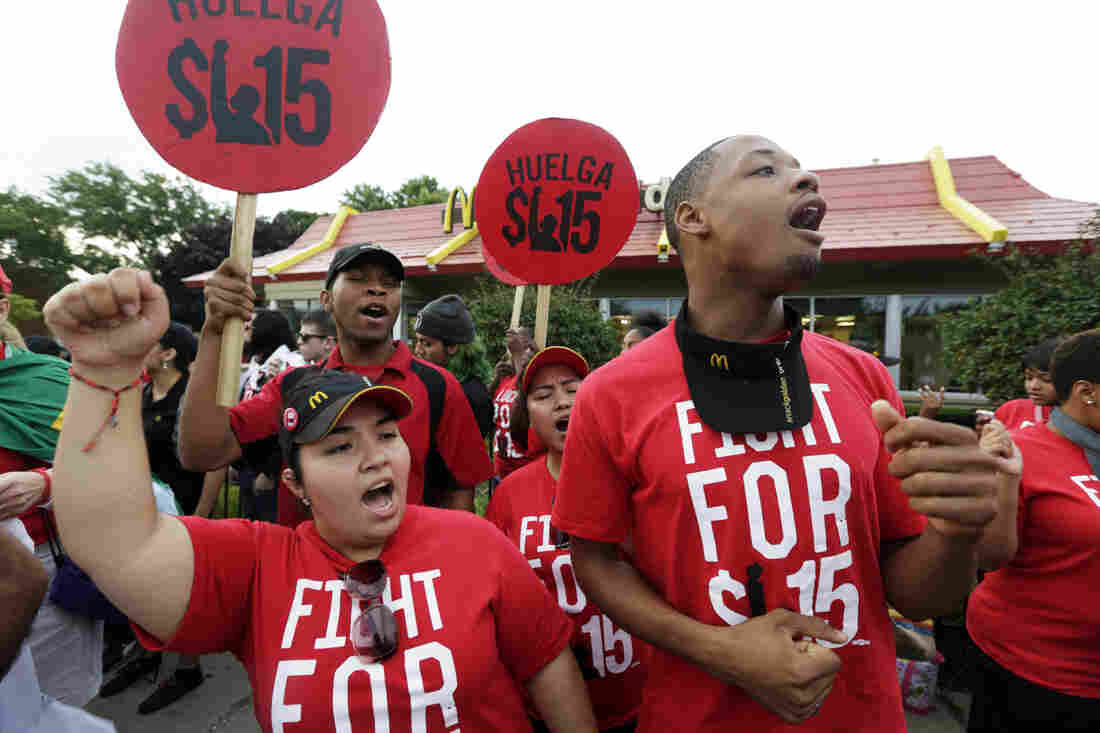 Protesters demonstrate outside a McDonald's in Chicago. Hundreds of workers from McDonald's, Taco Bell, Wendy's and other fast-food chains were expected to walk off their jobs Thursday to push the companies to pay their employees at least $15 an hour, according to labor organizers. M. Spencer Green/AP hide caption 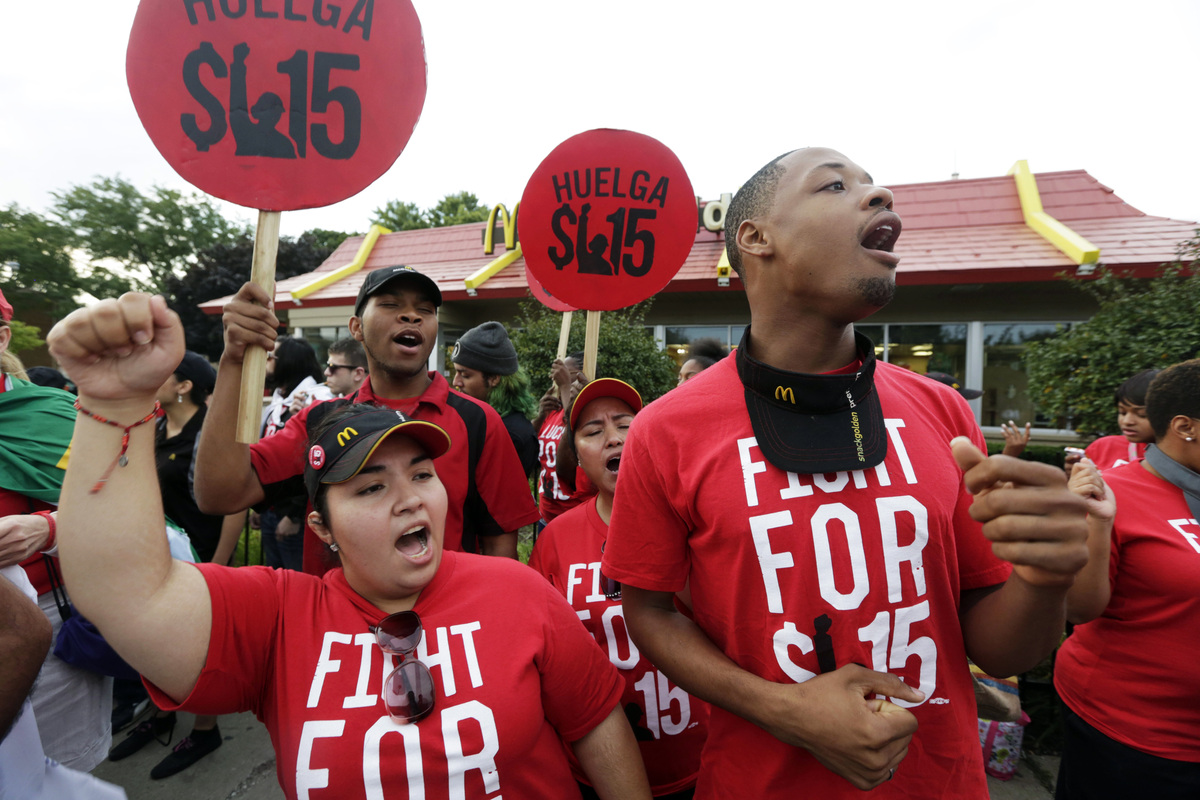 Protesters demonstrate outside a McDonald's in Chicago. Hundreds of workers from McDonald's, Taco Bell, Wendy's and other fast-food chains were expected to walk off their jobs Thursday to push the companies to pay their employees at least $15 an hour, according to labor organizers.

Fast-food workers in cities across the country, from Los Angeles to Chicago to Hartford, Conn., rallied for higher wages during a day of demonstrations Thursday.

Union organizers, backed by the Service Employees International Union, are building a campaign for $15-an-hour pay.

At the corner of 87th Street and South Wabash in Chicago, an intersection that has a McDonald's on one corner and a Burger King on the other, workers chanted "$15 an hour" or sang "We Shall Not be Moved" as they blocked traffic.

"We took over the whole street," said Jessica Davis, 26, a McDonald's employee who lives in the Chicago area. "It was empowering."

By early afternoon, the police had handcuffed and arrested an estimated 30 demonstrators. Similar scenes played out in other cities: In Kansas City, local news reported a sit-down rally leading to arrests; protesters in Milwaukee were taken into police custody; and a march of about 100 workers in Hartford, Conn., led to several arrests.

The campaign, which started two years ago when fast-food workers in New York City rallied for higher wages, has grown. In December, demonstrators got the attention of lawmakers in Washington, D.C., sparking talk of raising the federal minimum wage to $10 or more.

But in many cities, a living wage would need to be much higher. For instance, in Chicago, where Davis lives, an adult with one child needs to make about $20 an hour to support his or her family, according to one living wage calculator.

Davis says she makes about $9 an hour at McDonald's, which is average for the fast-food industry. She argues that it's not enough.

"It's extremely hard. I'm forced to use government assistance to take care of my children," Davis said. She relies, for instance, on the SNAP program, or food stamps, to buy some of her groceries.

And Davis is not alone. A recent study by economists at the University of California, Berkeley concluded that 52 percent of fast-food workers rely on taxpayer-funded public assistance programs, such as SNAP or Medicaid.

Those programs and subsidies cost taxpayers about $7 billion a year, so the study led some economists to ask: Why should middle-class taxpayers subsidize corporate profits?

Despite the assumption that flipping burgers is a job for teenagers, the majority of fast-food workers are adults, and a third of them are parents.

"This is a multibillion-dollar industry," says Jack Temple, an economist at the National Employment Law Project. "McDonald's' profits were $5.6 billion last year. There's plenty of revenue to afford a living wage."

In a statement, McDonald's wrote that the company and its franchisees support paying employees fair wages. "We believe that any minimum wage increase should be implemented over time so that the impact on owners of small and medium-sized businesses — like the ones who own and operate the majority of our restaurants — is manageable," the statement read.

A sudden jump to $15 an hour, which is about double the current minimum wage, is a bad idea, the industry says.

"A $15 [per hour] entry-level wage would increase the cost of food probably by about 35 percent to 40 percent," says Scott DeFife of the National Restaurant Association.

And economist Michael Strain of the American Enterprise Institute says a jump to $15 an hour likely would lead to more automation and fewer jobs in the sector. For instance, Strain notes that fast-food workers used to fill diners' drinks for them, but that task is now delegated to the customers.

You think you need a person to say, "Welcome to McDonald's, may I take your order?" Nope, says Strain. In the future, we all may be keying our orders into an iPad or some other technology.