Accessibility links
Tax Breaks May Turn San Francisco's Vacant Lots Into Urban Farms : The Salt San Francisco is one of many U.S. cities rolling out incentives to grow food on unused land. But some San Franciscans argue that land should be used to address the acute affordable housing shortage. 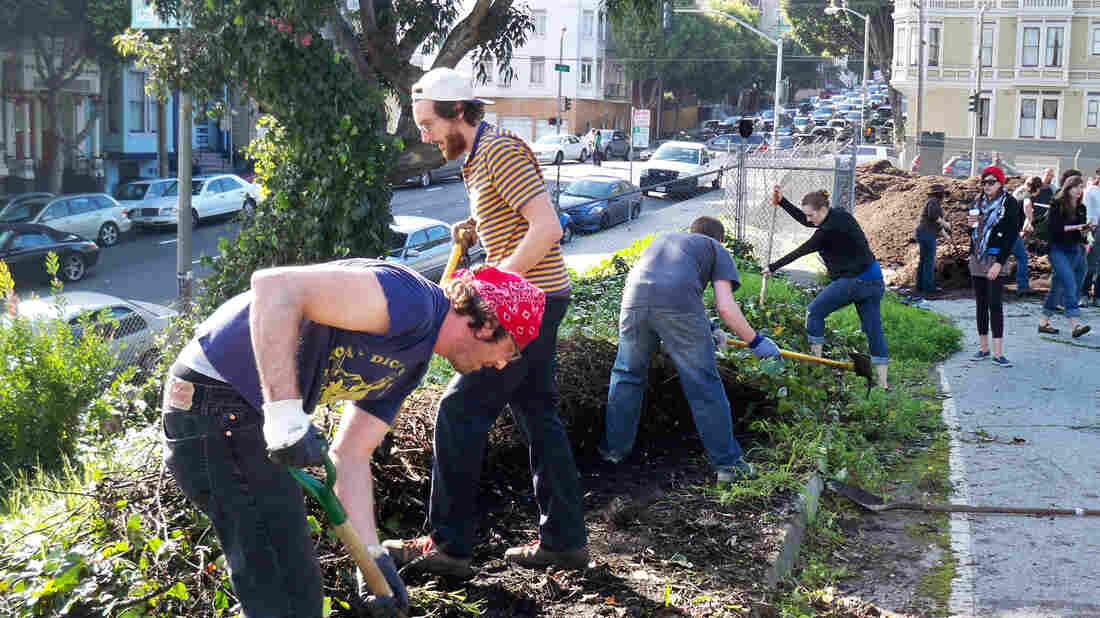 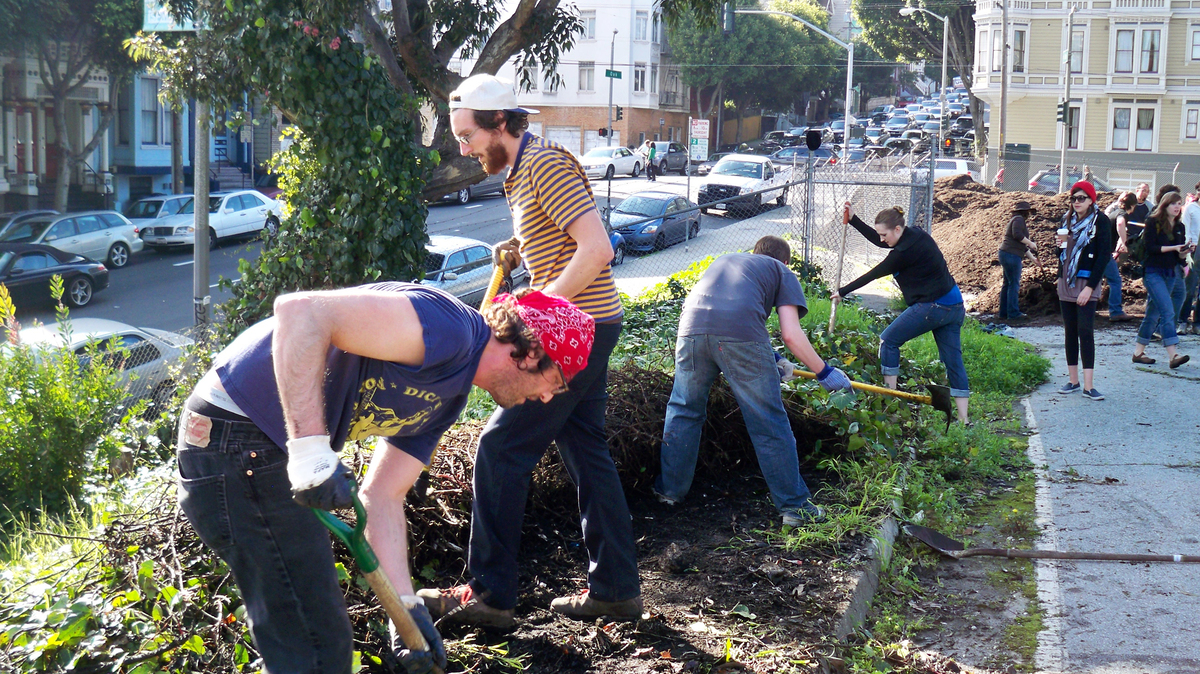 In San Francisco, there's a new program aimed at property owners who can resist the temptations of the sky-high real estate development market and turn their vacant lots into agricultural oases instead.

Many sustainability advocates have applauded the creation of the tax incentive, announced in August. But critics say there is no room in San Francisco to devote space to corn, beans and kale when homes cost millions and rent is at least $2,000 per bedroom in desirable areas.

Here's how the tax break works: Property owners who are willing to turn uninhabited land into farms would get that land assessed at the going tax rate for the state's irrigated farmland. According to the U.S. Department of Agriculture, that was about $12,500 per acre in 2013.

If accepted into the program, the property owner's annual dues to the city would drop from $10,000 or more to roughly $100. But the landowner would have to keep the land as an agricultural operation for at least five years or pay back the balance of the tax reduction, plus interest.

To qualify, the farm must also sell or donate produce to local residents, offer school tours or some other educational benefit or serve as a community-run garden space.

"The city legislation requires that there be some sort of public interface," says Eli Zigas, an urban agriculture advocate with the San Francisco-based nonprofit SPUR who helped develop the ordinance. Zigas feels urban farms can, to a small degree, increase a region's food security. But their primary value is to raise awareness among city slickers otherwise disconnected from food production systems, Zigas says.

Newbie Urban Gardeners May Not Be Aware Of Soil's Dirty Legacy

The city law's author David Chiu, a member of the San Francisco Board of Supervisors, tells The Salt there is currently nowhere near enough garden space in San Francisco to accommodate locals who want to grow their own food. He says the waiting list for some city residents hoping to get their hands into the soil of local community gardens is as long as two years.

"There is enormous demand for this, in every single neighborhood," Chiu says, adding that, nonetheless, some public gardens have been lost to development projects. "So we want to create incentive for property owners to preserve their land by using it for farming."

San Francisco's ordinance follows passage of a state law, Assembly Bill 551, in 2013 that gave cities and counties the authority to create tax incentives to start urban farms. While San Francisco is out in front, activists in Los Angeles, Oakland, San Jose, Sacramento and Fresno have all discussed creating similar incentive programs that would foster urban farming and rid their cityscapes of blighted vacant lots, according to Zigas.

Nationally, too, interest in urban farming is on the upswing, and many states have passed laws to promote city farms. In New Jersey, property used for urban agriculture is exempted from property taxes as long as a nonprofit organization runs the farm.

In Utah, urban land may be zoned for agriculture if the lot is between two and five acres.

Missouri, Hawaii, Texas and other states have created their own urban farming support programs. In 2010, Cleveland updated its zoning code to permit agriculture on all vacant residentially-zoned lots while creating a grant program for farmer co-ops and community-supported agriculture.

In Maryland, counties and the city of Baltimore may now offer tax credits for land used exclusively for farming. Baltimore officials have drafted a bill to take advantage of the state law.

Urban farming advocate Megan Wakefield with the Community Law Center in Baltimore says growing crops in the city is important because it revitalizes abandoned lots, allows people to experience cultivation of food and helps foster a sense of community among neighbors.

"From an environmental perspective," Wakefield adds, "urban farming projects throughout the city help reduce the distance food has to travel to get to the consumer and provide pervious ground that helps reduce storm water runoff."

But in San Francisco, at least, not everyone likes the idea of using valuable real estate to grow food.

"It's not like we have a food shortage in California ... but we certainly have a housing shortage," says David Sobel, the executive director of the San Francisco Housing Development Corporation, a nonprofit that helps lower-to middle-income people find affordable housing.

Sobel says he would like to see initiatives that support rooftop farming or encourage residents to grow backyard gardens. He says lower-income neighborhoods, especially, could benefit from having access to such greenery. "That could help meet two needs at once, without precluding people from living there," he says.

Aaron Roland owns a two-lot property in San Francisco's Potrero Hill neighborhood that has been used as a farm for years. While he recognizes there's a housing shortage, he'd like to keep the property the way it is.

Thanks to the new tax break, Roland will begin saving about $6,000 per year. (Roland is paying especially low taxes because he bought the property 17 years ago.)

"Is there $6,000 in value to the people of San Francisco in having this land used for agriculture? I think there is," says Roland. He estimates he would reap about $2 million if he sold the land for development, rather than use it as a garden.

Karen Heisler, owner of the restaurant Mission Pie, sources some of her produce from a San Francisco urban farm. She says she supported the state law passed in 2013. Heisler says encouraging temporary gardens does not prevent a house from eventually taking its place on an undeveloped property— it just encourages property owners to do something productive with their land while possibly making development plans. For properties that are unsafe for building due to instability or erosion issues, the city's tax break offers owners an alternative long-term use plan, she says.

"[Assembly Bill] 551 does nothing to impede the development of housing," she writes in an email. "If a developer has a site and resources ready for development, she or he will simply go forward and develop."

Sobel, though, expects any efforts to replace a beloved community garden with homes will meet with fierce resistance.

"I think a temporary garden could easily become permanent," he says. "I hope people's expectations are shaped around the eventuality that these properties could eventually be developed."