The Comeback Of The Endangered Colorado Orange, An Apple

The Comeback Of The Endangered Colorado Orange, An Apple 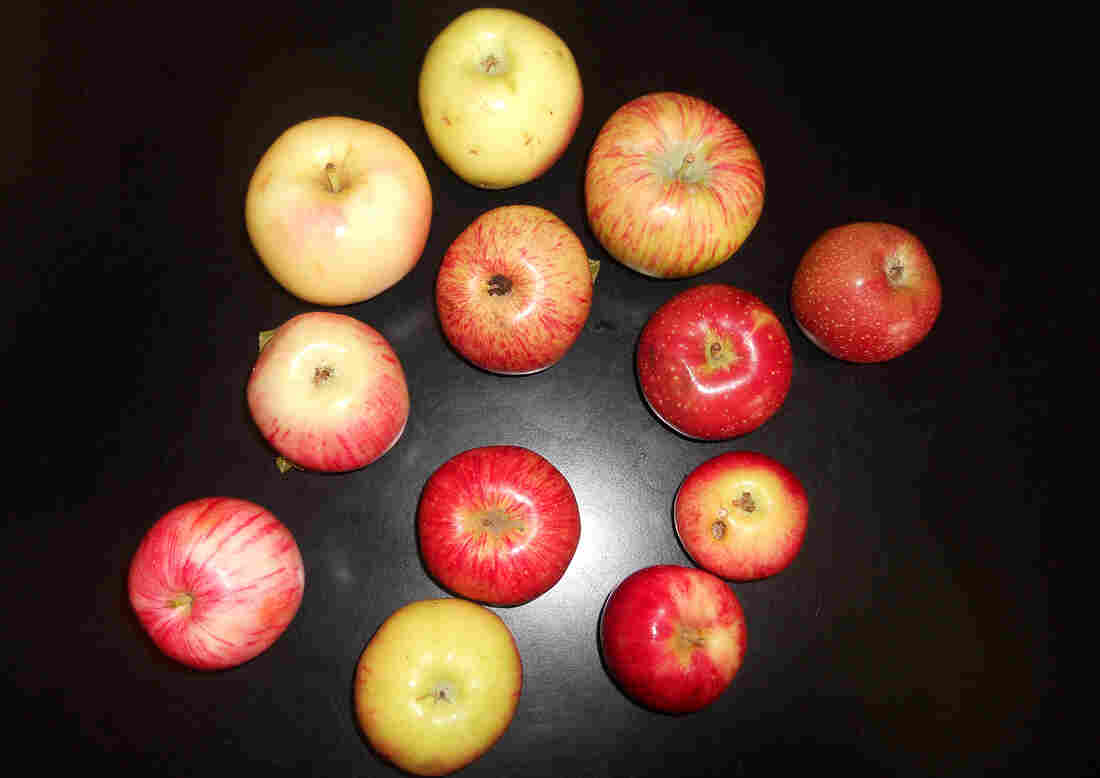 The Maiden Blush, Chenango Strawberry and Duchess of Oldenburg are heirloom apples found in old orchards across Colorado, which was once a major apple-producing state. Adalyn Schuenemeyer /Montezuma Orchard Restoration Project hide caption 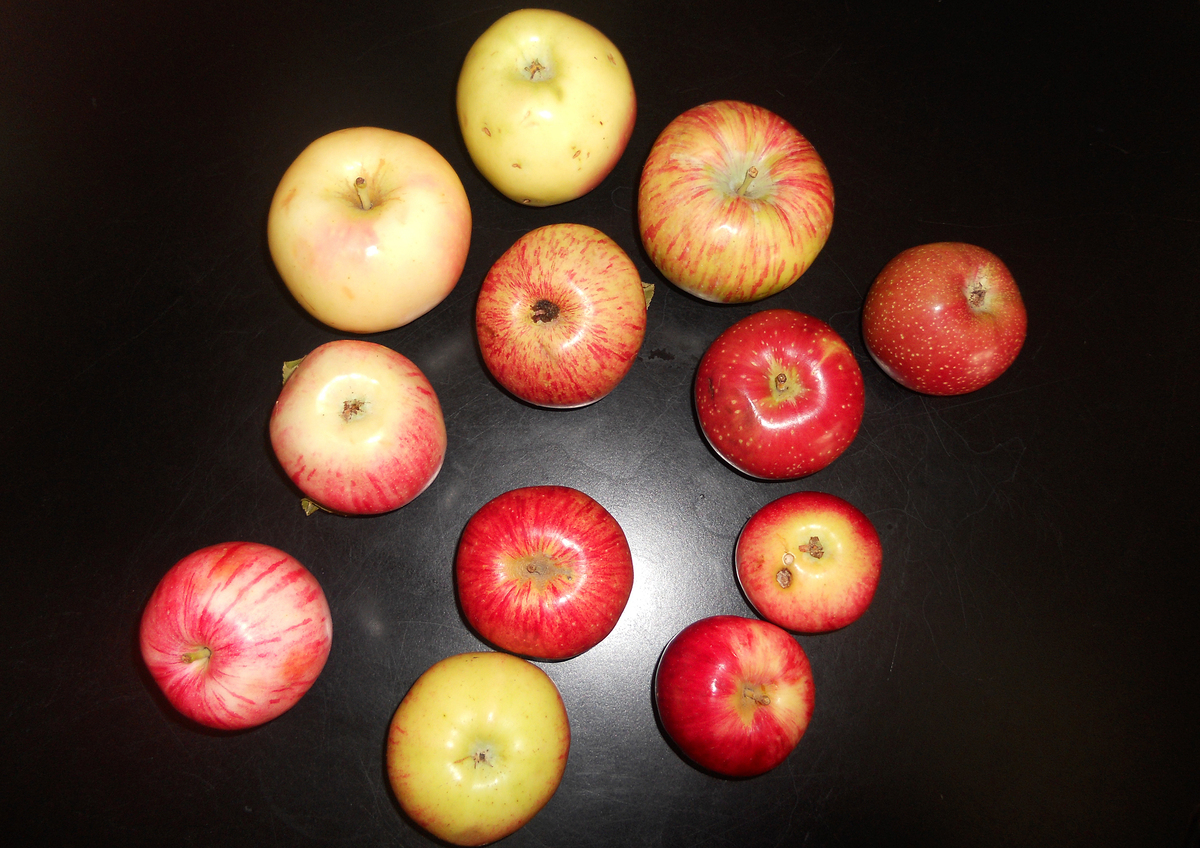 The Maiden Blush, Chenango Strawberry and Duchess of Oldenburg are heirloom apples found in old orchards across Colorado, which was once a major apple-producing state.

The Colorado Orange is not an orange, in color or essence.

"It is an apple, with a unique texture and taste. It has a little bit of a citrus bite," says Paul Telck, one of the few people today to have tasted the apple – a yellow fruit with an occasional red blush, once thought to be extinct.

A few years ago, Telck, who owns an orchard in Fremont County, southwest of Colorado Springs, knew little about the Colorado Orange. Now, he's involved in an effort to bring it and other endangered Colorado apples back from the brink of extinction.

When Telck bought his orchard nearly 40 years ago, it had about 100 old apple trees in it, all different kinds.

"The older varieties are apples that were actually put here for the prison system," which once operated a cannery, he says.

Telck enjoyed his orchard, and knew many of the apples by name: Gano, Macintosh and Ben Davis, a popular apple of the early 20th century.

"But there were a few trees, in fact there are [still] a few trees now, that were something I had no idea what they were," he says.

In 1991, he learned a little more. Fremont County and the area around its county seat, Cañon City, had once been one of the premier apple producing areas in the state. The local historical society decided to have an apple tasting at the prison museum, with folks from the area bringing in apples from their historic orchards.

On the face of the invitation was a picture of an apple Telck recognized as one of his orchard unknowns – yellow, slightly ovular, with a reddish blush. It was captioned: Colorado Orange.

So Telck took the apple matching the picture out of his orchard to the tasting.

"And of course it stole the show. That's when we found out we had a Colorado Orange in our orchard, and at that time we had three of them," he recalls.

The find was exciting, but it wasn't until a few years later that Telck realized he had what might be one of the only Colorado Orange trees left in America. By that time, half his orchard and two of the three Colorado Orange trees had been killed by an early, heavy frost, where temperatures went 20-below Fahrenheit for almost 24 hours.

Telck wanted to do something to save the tree, so he started trying to learn how to graft. It was challenging though, and he didn't quite know what he was doing.

Then, he got a call.

Jude Schuenemeyer is an orchardist and nursery owner in Cortez, in the far southwest corner of Colorado. He has red hair, strong hands, and an intense fascination with old fruit trees.

There are a lot of these where he lives in Montezuma County, which was once the premier fruit-growing area in the state, winning gold medals for its fruit at the 1904 St. Louis World's Fair, and taking almost every prize for fruit in Colorado State Fairs in the early 1900s. 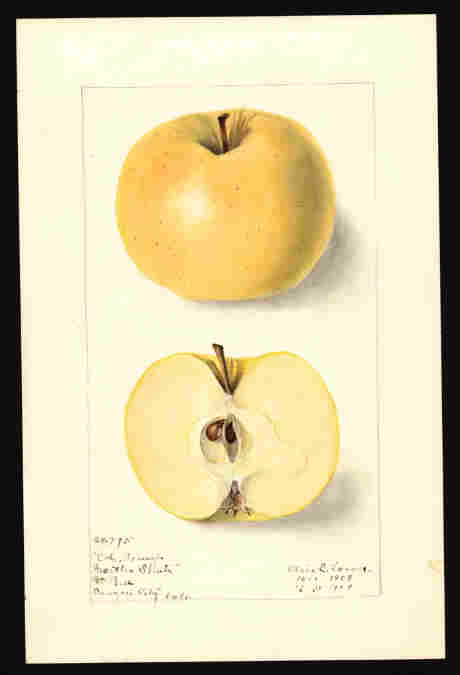 About six years ago, Schuenemeyer started an effort that has become the nonprofit Montezuma Orchard Restoration Project. He begin by getting in touch with folks who had old orchards, trying to find rare trees, and grafting those old varieties that might be dying out onto new root stock. He also holds grafting workshops in area orchards, helping others learn the art of taking old trees and giving them new life.

The goal is threefold, he says: preserving the unique and rare genetic resource of ancient fruit trees, compiling an orchard history of the area and rebuilding the area's orchard industry so these trees will be preserved because there is demand for their fruit.

"The trees are old and the people are old," he says. "Our hope is by finding the genetics and tying in with the history, our hope is by doing those two things, we can help to resuscitate an economy again.

While doing research on historic trees, Schuenemeyer has rediscovered unusual varieties like the Early Strawberry, and the Cedar Hill Black, which was found in an orchard of an elderly woman who has since passed away. He also learned about another rare tree that was once grown in his southwestern corner of the state: the Colorado Orange.

"I knew the thing had existed here," says Schuenemeyer, but he did not find any Colorado Orange trees in Montezuma County. He traced the tree's origins to Fremont County, and wondered if it might still exist there.

A couple of calls to the Fremont County agricultural extension office later, Schuenemeyer was connected to Telck.

In March 2012, Schuenemeyer made his way to Telck's orchard. They took parts of trees from the old Fremont Country orchard, and grafted away. All in all they grafted 50 or 60 trees, Telck recalls.

Schuenemeyer taught Telck how to do a type of grafting called whip and tongue, one of the easier methods to learn, and held a grafting class at his orchard, so others in the area could also learn the technique.

How Colorado Lost Its Apples

Schuenemeyer has sent young grafts, including the Colorado Orange, to Dan Bussey, an apple expert who runs an orchard at Seed Savers Exchange, an Iowa nonprofit dedicated to conserving and promoting diverse and endangered varieties of food crops.

The Colorado Orange, says Bussey, was once popular enough to be grown in the Midwest, even though it originated in an orchard in Fremont County. A 1916 copy of the Moncrief Orchard Book from Winfield, Kansas, states of the Colorado Orange: "Deserves wider planting. Rich golden yellow, blooms late, fine keeper. In demand at high prices."

But the Orange, along with thousands of other varieties, eventually gave way to the monolithic Red Delicious, says Bussey, who is writing a book about the 17,000 apple varieties that have existed across America from 1600 to the present.

"Like anything, people are always looking for something new," says Bussey. The Red Delicious, with its "great, great color," soon became a nationwide craze in the 1920s and beyond.

The older apples hung around in orchards for a time. "But after a while they just came to be looked over," Bussey said.

In southwest Colorado's Montezuma County and in Fremont County, the state's orchard industry dwindled. Schuenemeyer called it a "death by 1,000 cuts." As growers planted more orchards with just one or two varieties, like Red or Golden Delicious, they were also more vulnerable to diseases and crop-killing frosts. In the past, orchards with many varieties might lose some to a freeze, but not all.

Washington State had also jumped into the apple game. For a time, Colorado competed with the Pacific Northwest state in terms of production. But with its milder climate and the growth of the railroads, which made distance to population centers less important, Washington soon became the dominant Western apple producer – especially when everyone was growing the same apples.

"Colorado was trying to compete on a commodity market, and Washington could outcompete them," says Schuenemeyer.

At some point, maintaining an orchard was no longer a good business proposition.

Although fruit from Colorado is of great quality, due to a combination of cool nights and warm days, "growing fruit at 6,000 feet is really challenging," says Schuenemeyer.

Bringing Back A Fruit Economy

Although Red Delicious won the hearts of Americans for many decades and is still a very common apple, it is now almost as despised as it is widespread, says Seed Savers' Bussey. As American tastes change, more people are excited to try heirloom varieties of apples from the past.

"When you have a chance to try some, you can't believe the difference in the flavors and the quality of these varieties that we had just put on the shelf. It can just be really good, it can be spectacular," says Bussey.

There are now at least 12 Colorado Orange trees growing in Fremont County. In and around Cortez, Schuenemeyer continues visiting old orchards and finding more rare trees. Recently, he sent leaf samples to Colorado State University for genetic analysis, to learn even more about some unidentified trees.

In 1922, there were 48,630 apple trees in Montezuma County, and at least 50 different varieties of the fruit. While a return to those apple-dominant days is probably out of reach, Schuenemeyer hopes to revive some of that diversity.

He knows of plans for a cidery nearby, one new avenue for local apples, and he also believes orchardists will be able to market their heirloom fruits to customers in Telluride, Durango and the nearby Navajo reservation.

Graft by graft, it's the beginnings of a new orchard economy.