Accessibility links
Want To Learn About The Scientific Method? Go Bake Some Cookies : The Salt How one woman's quest to bring you the scientific method has resulted in a blog project chock-full of chocolate chip cookie experiments. Wear your oven mitt and bring a glass of milk.

Want To Learn About The Scientific Method? Go Bake Some Cookies

Want To Learn About The Scientific Method? Go Bake Some Cookies 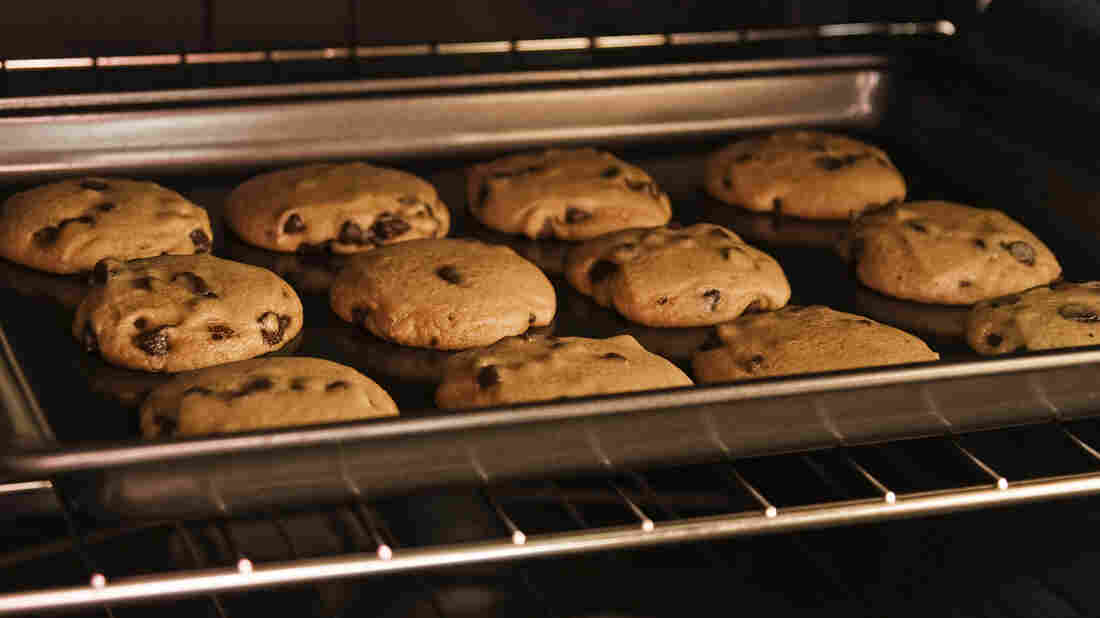 Chocolate chip cookies can be the gateway to a better understanding of the scientific method. iStockphoto hide caption 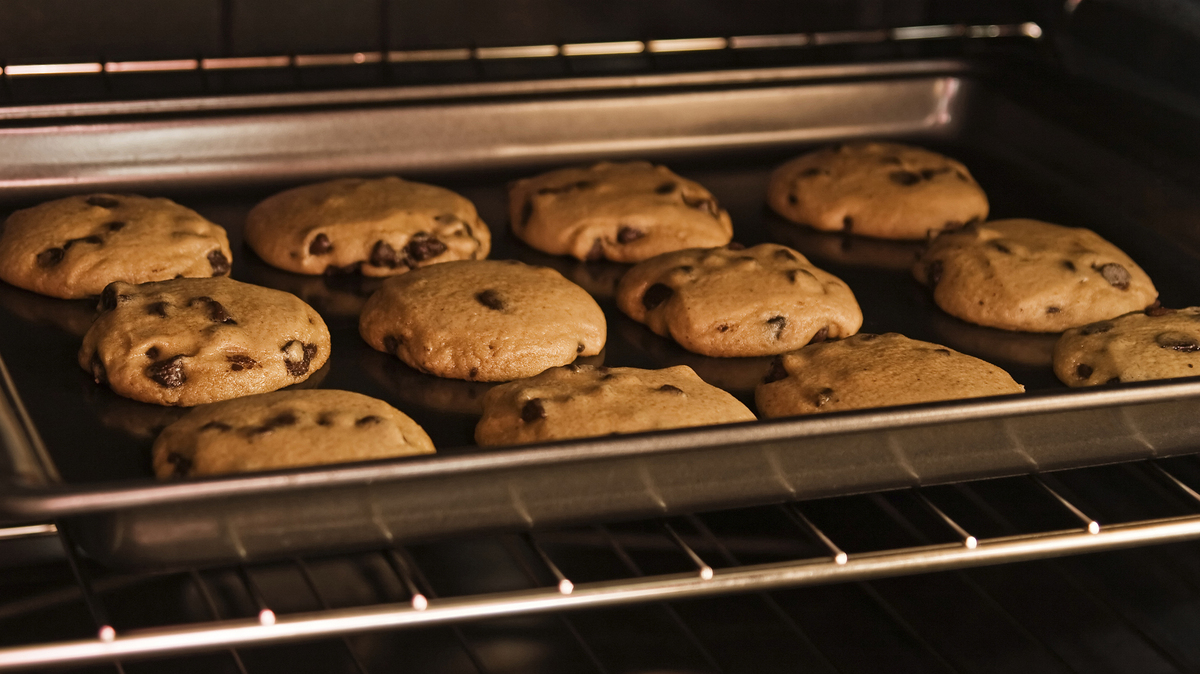 Chocolate chip cookies can be the gateway to a better understanding of the scientific method.

Bethany Brookshire, aka @SciCurious, is a blogger at ScienceNews, where she covers the latest science research and develops creative science outreach projects. 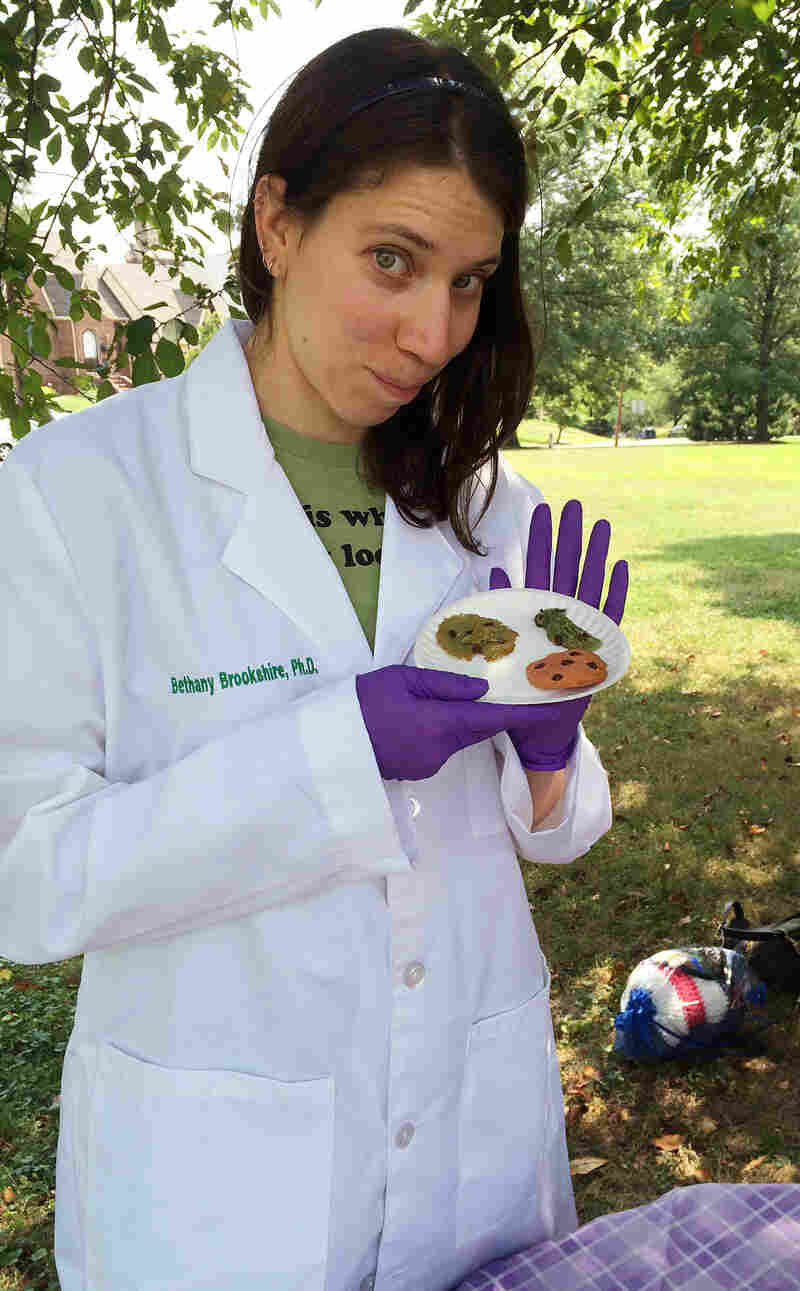 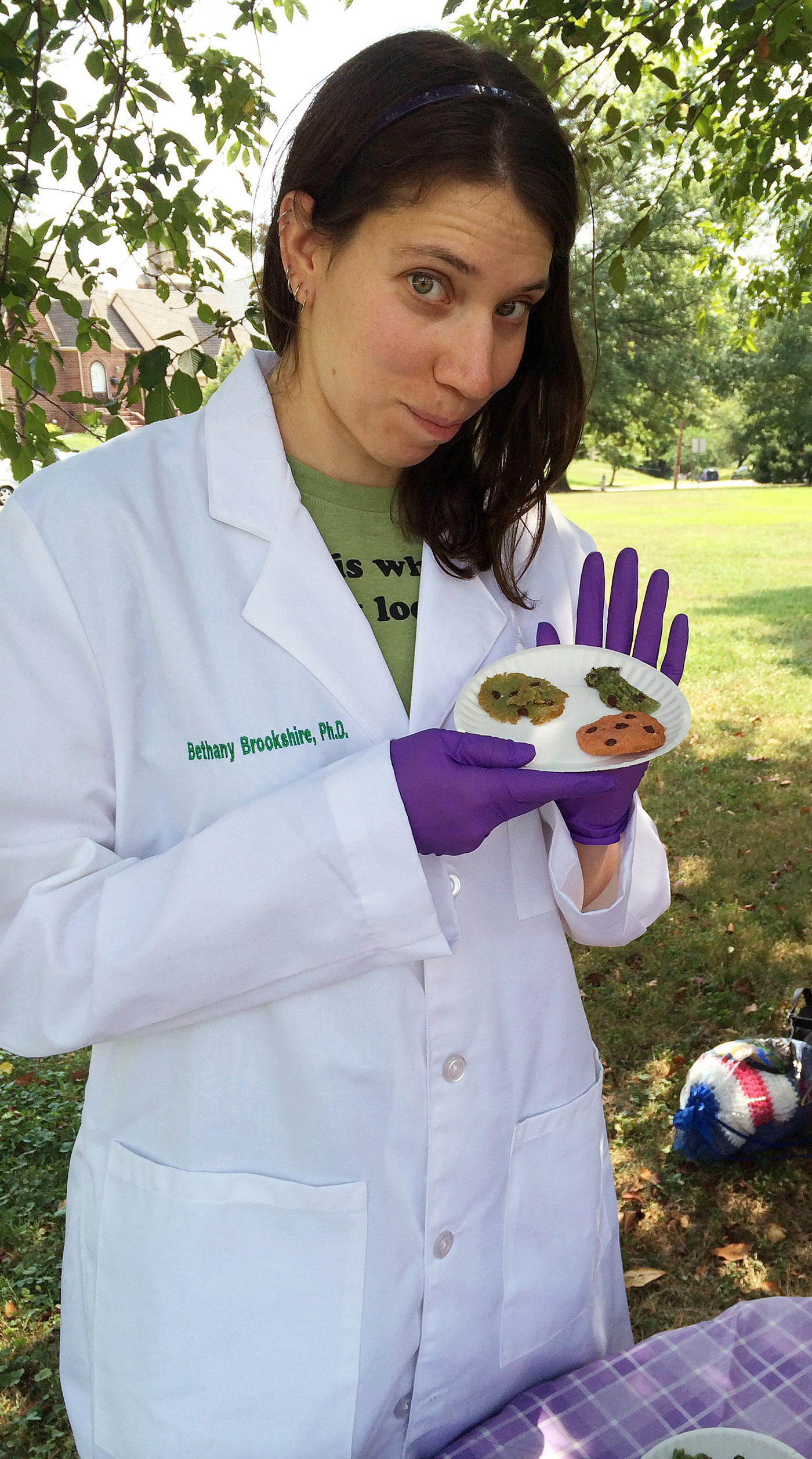 Bethany Brookshire believes the scientific method is best when baked.

She has recently started her own project, the deliciously named Cookie Science, which aims to illustrate the scientific method by creating what she hopes will be a tasty gluten-free cookie for a friend.

She tells The Salt how the project is more than just developing a recipe for a sweet treat.

This Q&A has been edited for clarity and brevity.

I was looking for projects that would work really well to demonstrate the scientific method, and it occurred to me that I wanted something really accessible, that people could do along with me if they wanted. And cooking — well, it's as close as your kitchen. And I bake a lot of cookies.

Yeah, it feeds my habit. I started this blog series called Cookie Science where I'm actually designing and carrying out a scientific experiment using cookies. And the ideas that I used — coming up with a hypothesis, different kinds of statistical tests, how you design an experiment, reading the scientific literature — this is the sort of thing that can be applied to any idea. It doesn't have to be cookies. Cookies are just a delicious vehicle.

That's the really interesting thing — why would you choose food in the first place?

I know that one of the great things about baking, and I bake a lot, is that when you make a single change — for example, the change I made in my first experiment was switching to gluten-free flour. That one change drastically changed your cookie. It's huge. Literally. You get a really huge, flat cookie.

I was reading your blog posts, and they're incredibly detailed in the scientific method. How did you decide what parts you were going to include? Those are things that normally people wouldn't think about. 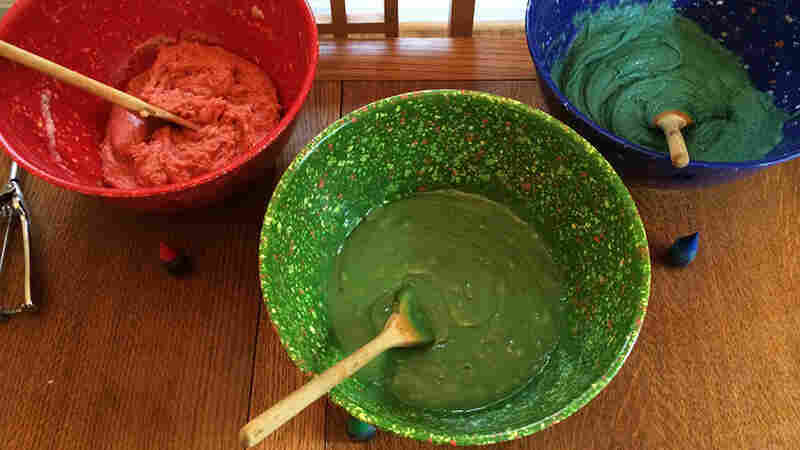 Brookshire color-codes her cookie dough. That way, she knows which dough is which, but her tasters don't, eliminating potential bias. Bethany Brookshire/Society for Science & the Public hide caption 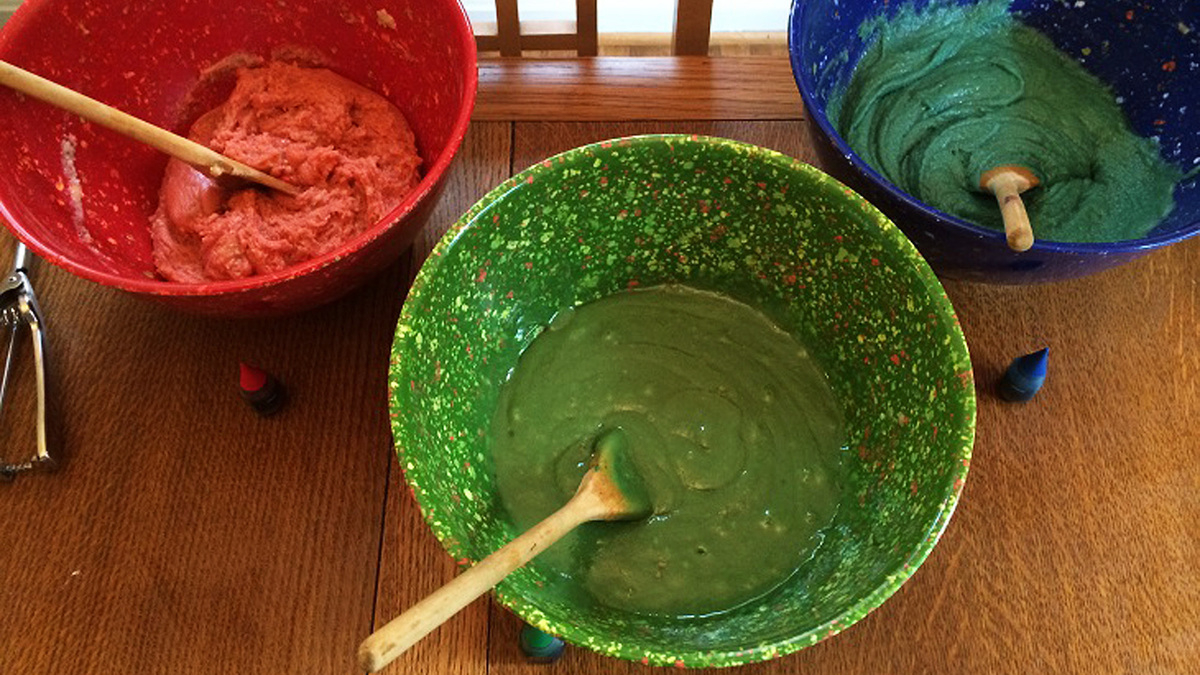 Brookshire color-codes her cookie dough. That way, she knows which dough is which, but her tasters don't, eliminating potential bias.

I decided to include them because they are so important to think about. When people think about science, you know you see all the time, online, these memes of "this person did science with cookies," and they'll have a photo of eight different cookies, and this is the cookie with all brown sugar, and this is the cookie with unmelted butter, or something. And that's cool, that's definitely science of cookies. But it's not the scientific method. It's not how an experiment is carried out.

Taking out one ingredient and baking it up and then taking a picture, that's not an experiment. It's cool, but it's not an experiment. And so I really wanted to document if you were going to do a real scientific experiment, this is how you would do it. This is what scientists do every day. And this is how they do it. I also wanted to take the chance to show the things that scientists have to go through on a daily basis. You can't just walk out and say, hey, people, I need to test this new drug or this new cookie and get a bunch of volunteers. It does not work that way. So it's a great opportunity to showcase what really happens in science, using cookies.

What kind of feedback have you gotten so far on the project?

I'm really excited that several people have contacted me to say that they're going to follow along and they're gonna bake up the experiment with me, which is wonderful. I don't expect everyone to get approval to test on humans, necessarily. But there are aspects that I am measuring for things like "cookie spread," how big the cookie gets, and things like that, that if you follow my recipe, you may be able to replicate my results. And I hope that they will. That's a really important part of science that I want to make sure that they can experience as well.

What do you hope people will take away from this project? 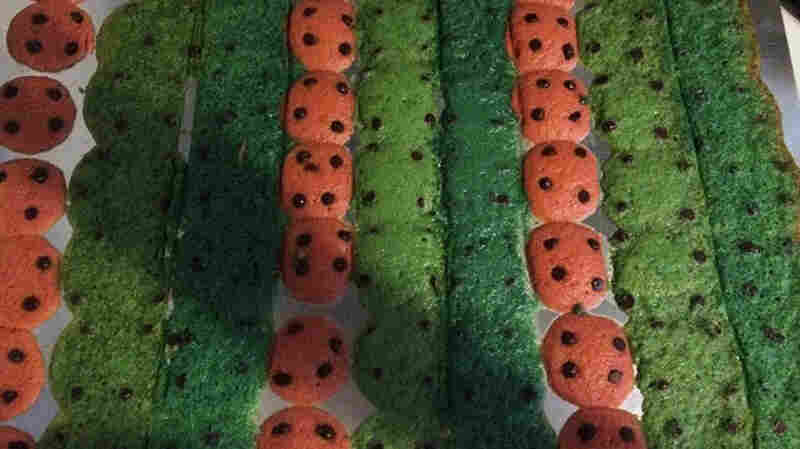 This is what Brookshire says cookie science looks like. Bethany Brookshire/Society for Science & the Public hide caption 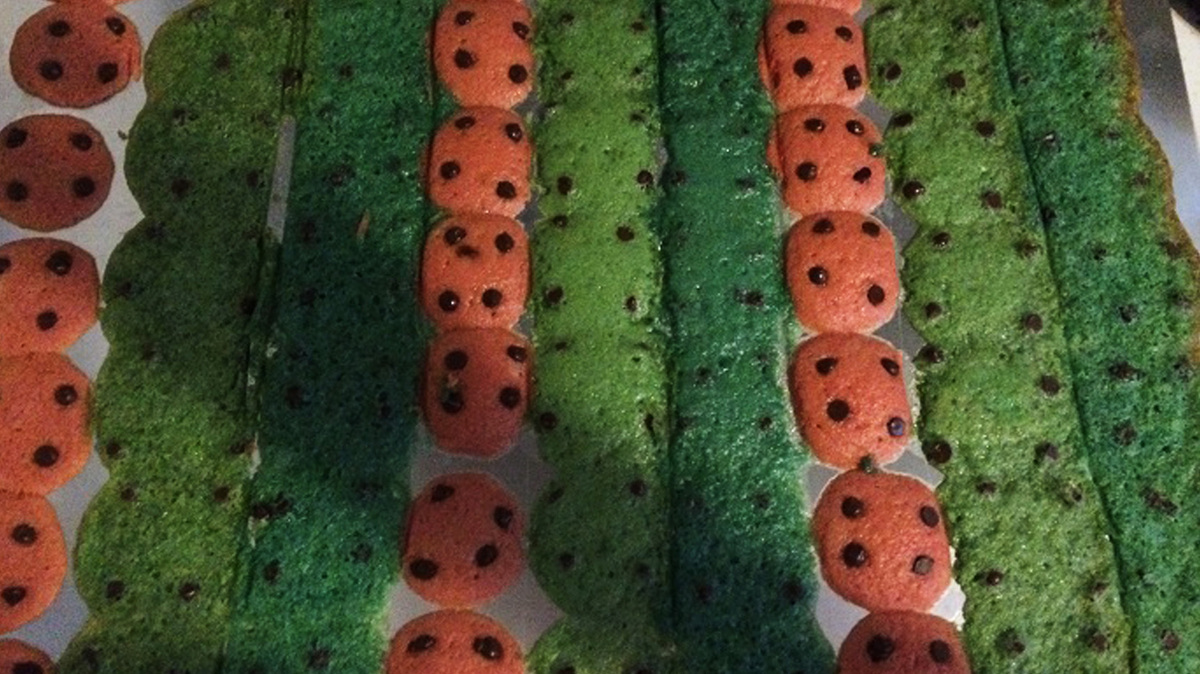 I hope that people will take away a very clear picture of what happens during a scientific experiment — how people go about conducting science. I also hope they come away with the impression that a science experiment is as easy as walking into your kitchen, looking around, and asking a question. Do you want to know how long a pork chop takes to cook at different temperatures? Or in different areas of your oven? You can design that experiment, and so I want to use cookies to show that this can apply to anything in your kitchen, and you can make science out of anything.

This isn't your first foray into creative science outreach. You also run your Twitter handle, @SciCurious, with nearly 32,000 followers. May 2013 was the first time you identified yourself [there by name]. How did that play into your science education and outreach persona?

It's mostly been useful. I think it's really increased my outreach — people can go and say, well, who is this person, and they can see previous work I've done. If they are concerned, they can go and they can look at my scientific publication record if they really want to. I don't recommend it, but they can.

Do you feel [the reveal has given] you more credibility?

I would like to think that the credibility of what I write stands on its own, especially now that I'm working to become a science journalist. But I do think some people really do like to know about science backgrounds.

And in this case, chef experience might be helpful.

Yeah, sadly. I'm an OK baker, but I set off the fire alarms a lot more than I would like to admit.