Accessibility links
Mistura Food Fest Gives Peruvian Cuisine A Chance To Shine : The Salt Every September, top chefs from around the world gather to celebrate the diversity of Peruvian cuisine. But not everyone is convinced the food boom is the answer to the country's historic challenges. 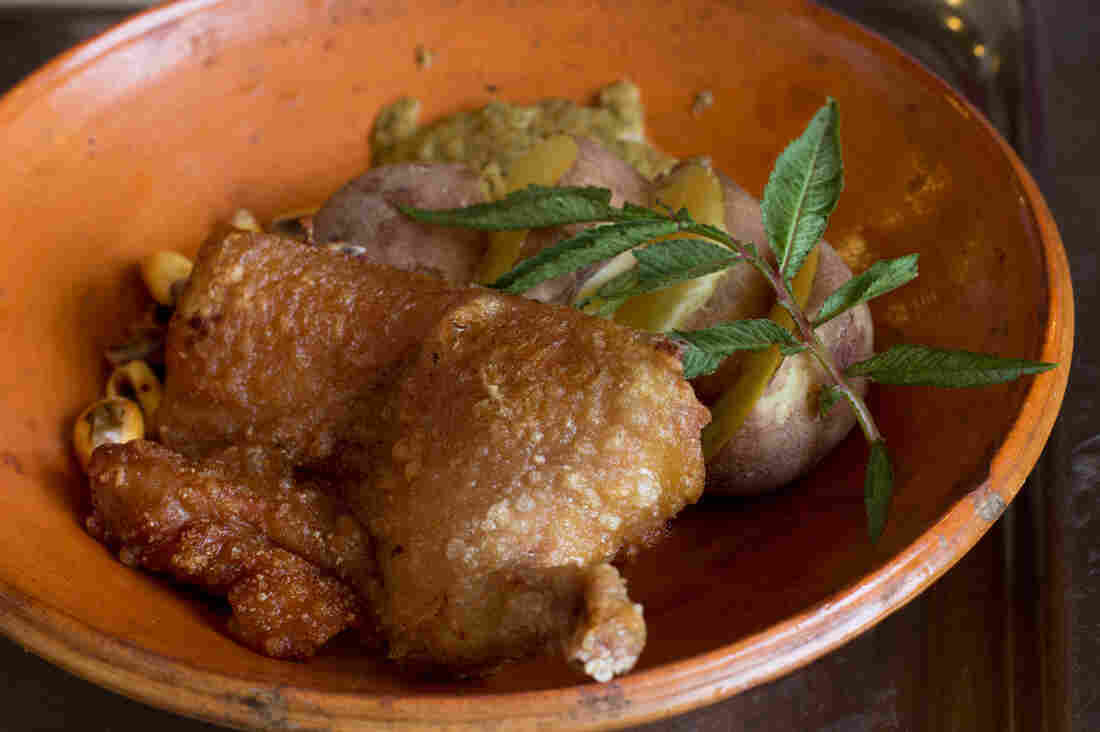 Cuy, or guinea pig, one of the traditional dishes from the Andes. Mollie Bloudoff-Indelicato hide caption 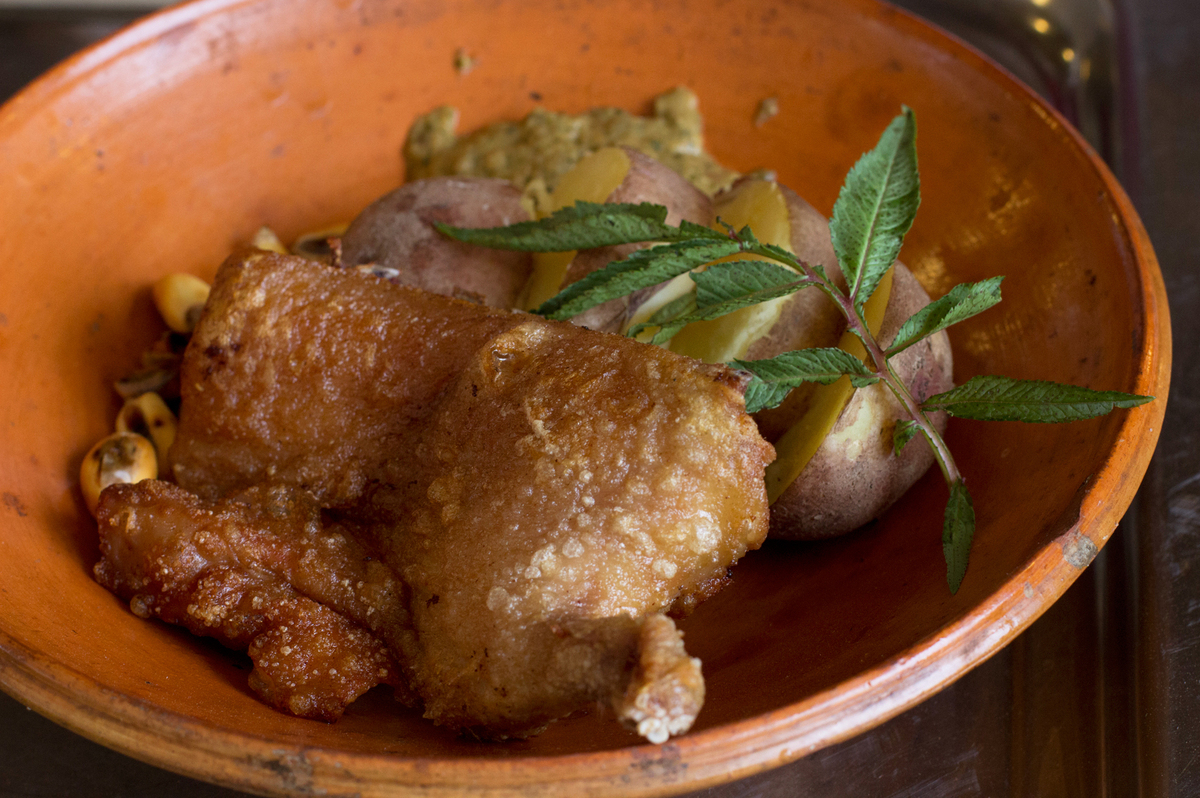 Cuy, or guinea pig, one of the traditional dishes from the Andes.

Every September, Peruvian restaurants and famous chefs from around the world gather in Lima for a celebration of Peruvian cuisine. The word mistura means "mixture" in Portuguese. And the cuisine served at Mistura, the biggest food festival in Latin America, certainly reflects a fusion of cultural dishes.

"Mistura is the culinary stronghold for one of the greatest cuisines of the world," says Victor Albisu, chef and owner of Del Campo, a South American grill in Washington, D.C. "It's the place to be in September." 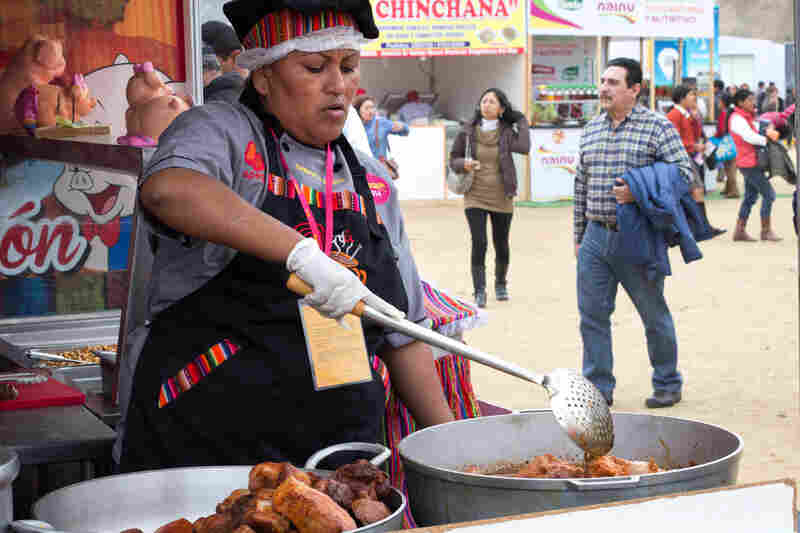 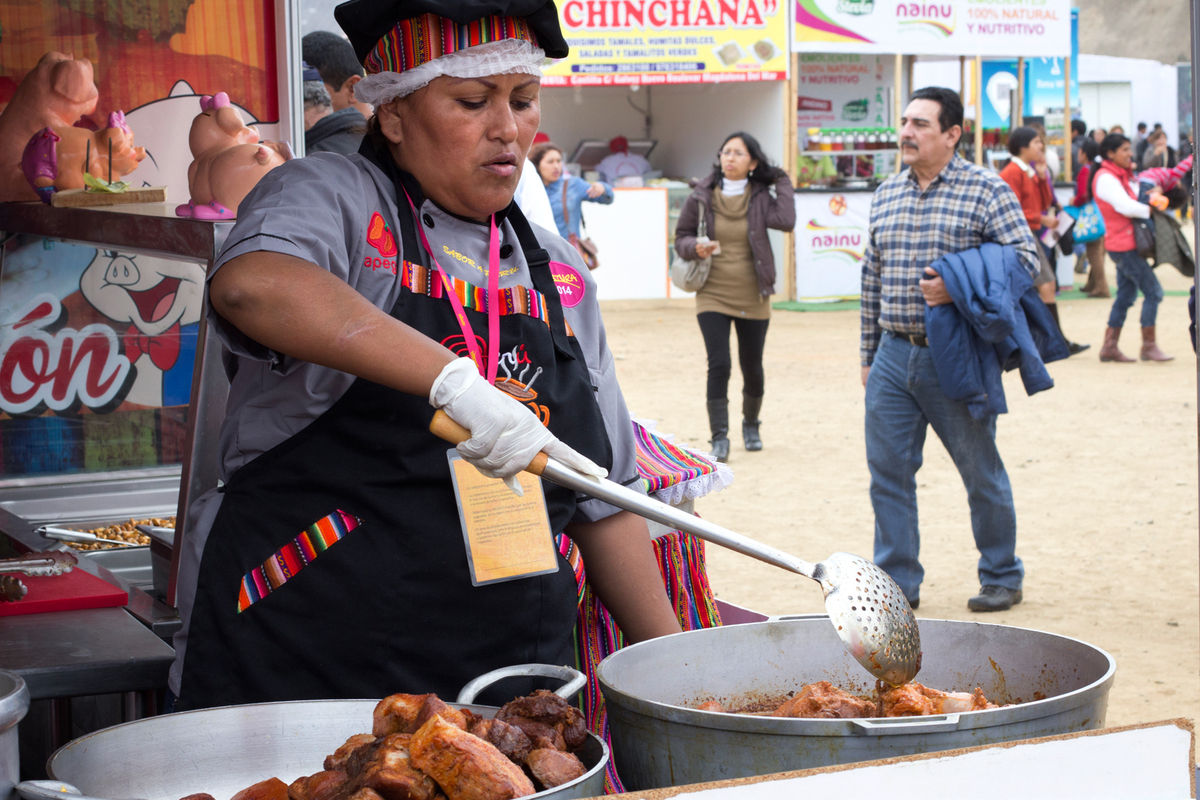 A vendor cooks a Peruvian stew at Mistura in Lima, the largest food festival in Latin America.

This year, restaurants from the Amazon served slices of a monstrous fish called paiche. Chefs from the coast were mobbed by hundreds of people who wanted to sample ceviche. Representatives of the Andean villages passed out plates of quinoa and cuy, which is guinea pig.

The gastronomic fair is part of the Peruvian "food boom" that's put Lima on the map for epicurean excellence, according to The Wall Street Journal and others. The festival has grown from just 30,000 attendees back in its first year, 2008, to an estimated 600,000 this year.

In Peru, food is exalted, and chefs are celebrities. When they comment on politics and current events, people listen. A visit from Acurio would be like getting pulled onstage by Oprah.

But to understand why Mistura is so popular, and why Peruvians love their food and their chefs with such fiery passion, you have to know the violence that plagued this country for decades. 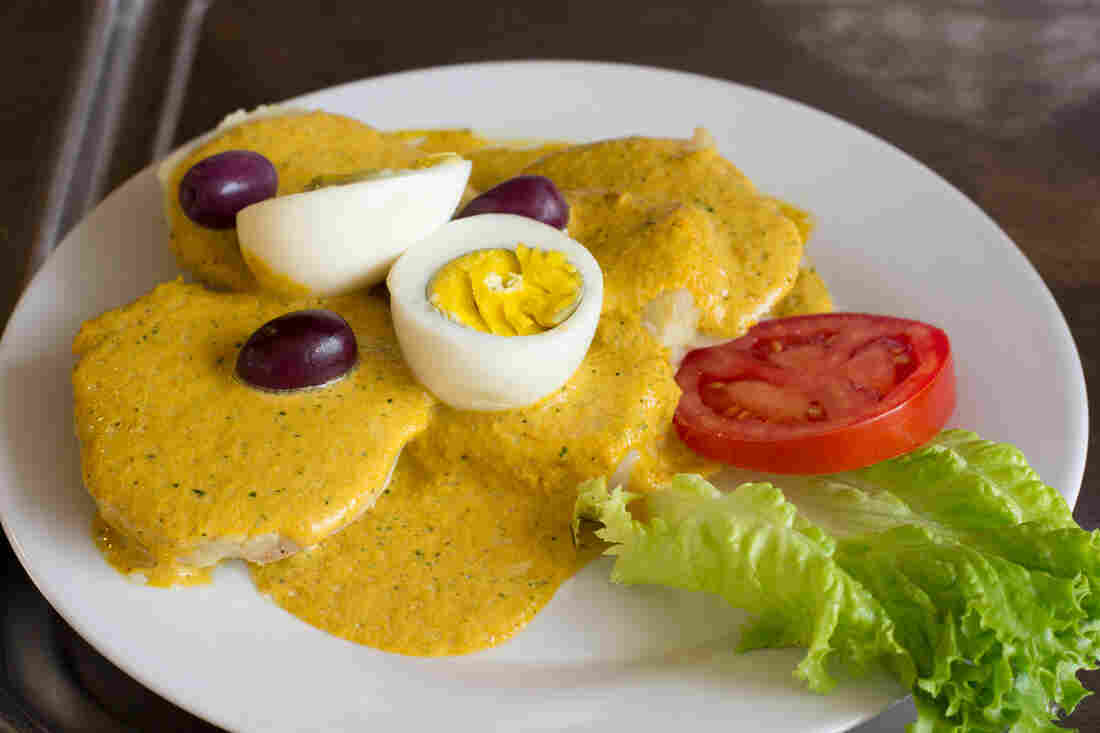 Ocopa is a traditional Andes dish made with slices of potato topped with a nutty, creamy sauce, hard-boiled eggs and olives. Mollie Bloudoff-Indelicato hide caption 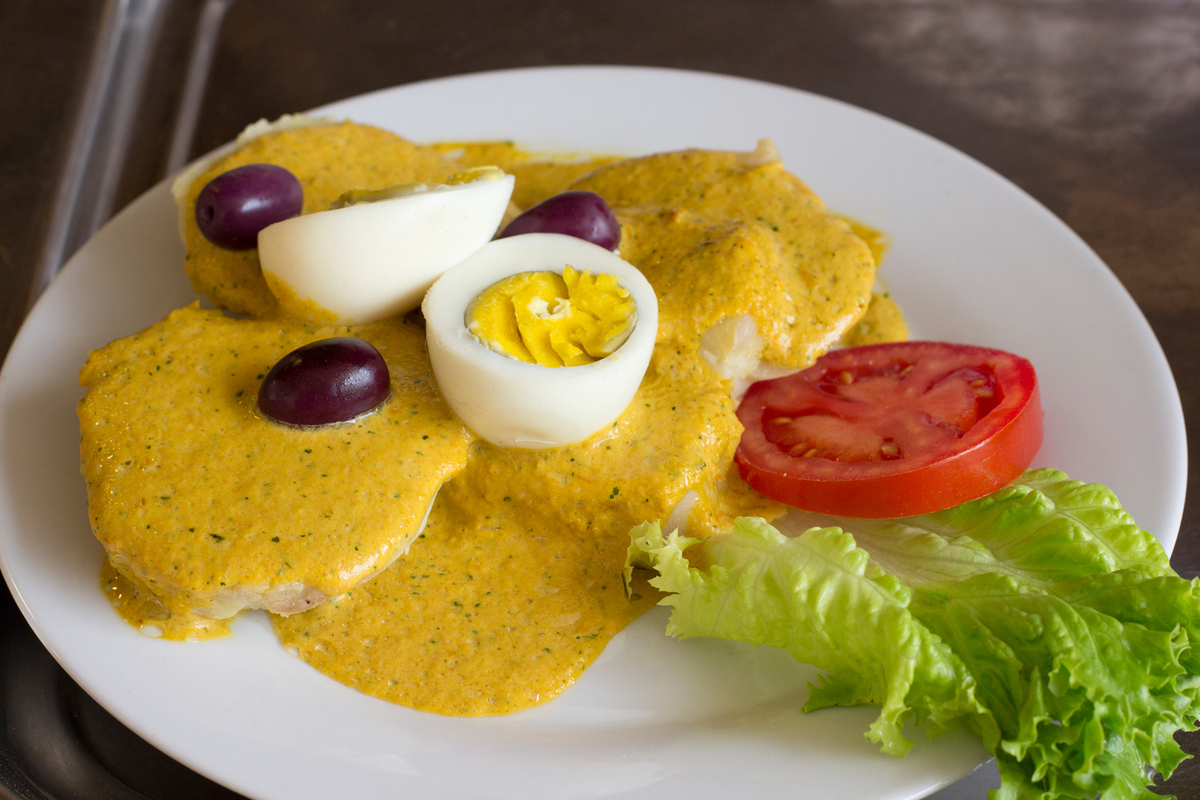 Ocopa is a traditional Andes dish made with slices of potato topped with a nutty, creamy sauce, hard-boiled eggs and olives.

Peru is still reeling from its battles with the terrorist group Shining Path, which began in the 1980s. Notorious for killing villagers who refused to support the Maoist movement, Shining Path menaced Peru with bombings and beheadings for almost 20 years.

Then, in the early 2000s, Peru got a new president, the economy picked up, and the terrorist killings decreased. Life suddenly became much more peaceful. Yet many of the issues that precipitated the Shining Path movement still exist: poverty, geographical disparities, cultural inequality, and discrimination against indigenous populations.

So a group of chefs, led by Acurio, decided to unite the country around its food.

"Using food to heal is very much about using food to show the world that we are better," says María Elena García, a cultural anthropologist at the University of Washington in Seattle who studies the Peruvian food movement. "Instead of being economically backward and this country that's mired in violence, you're suddenly this world power in terms of cuisine."

Mistura is supposed to be a celebration of that healing power. But while Mistura brings together various foods, it doesn't necessarily bring together all people. The festival is targeted at Peru's elite because it's too expensive for a working-class family to attend, says Raul Matta, a sociologist at Institut de Recherche pour le Développement in Paris.

It's about $8.75 for an adult ticket, and small plates of food are about $6. That may not seem like a lot to an American audience, but it's an awful lot to the average Peruvian, who could eat lunch in a nice neighborhood for about $3.50. And chefs pay for stalls, too, he says. 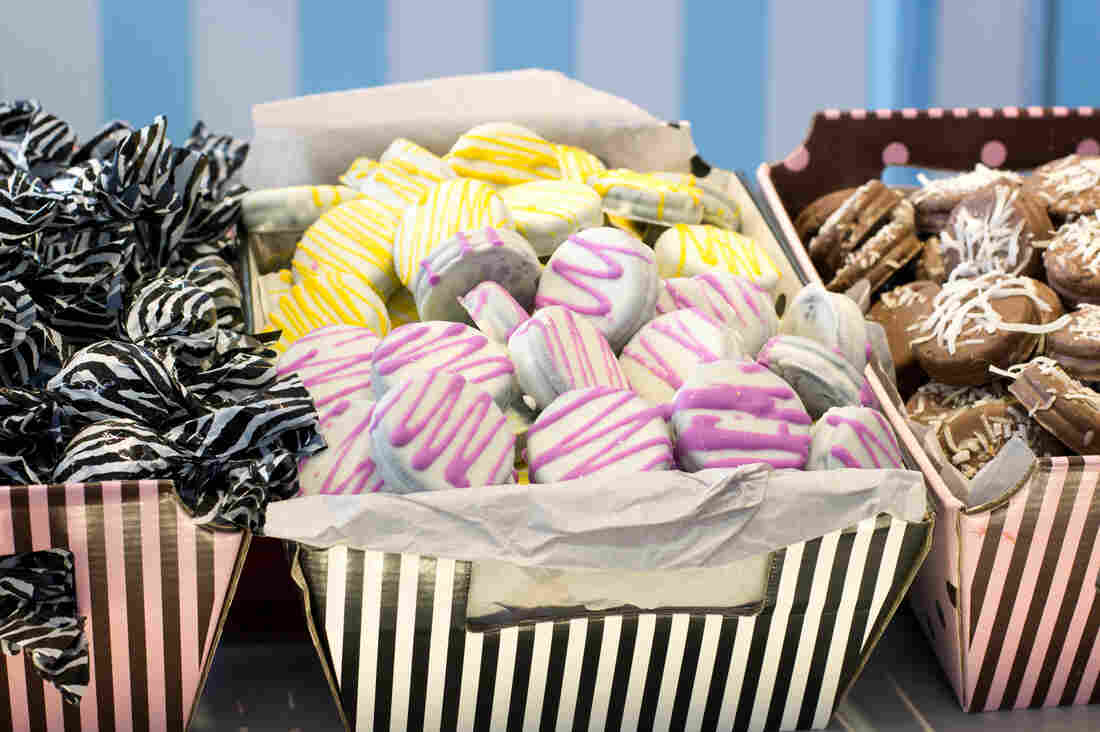 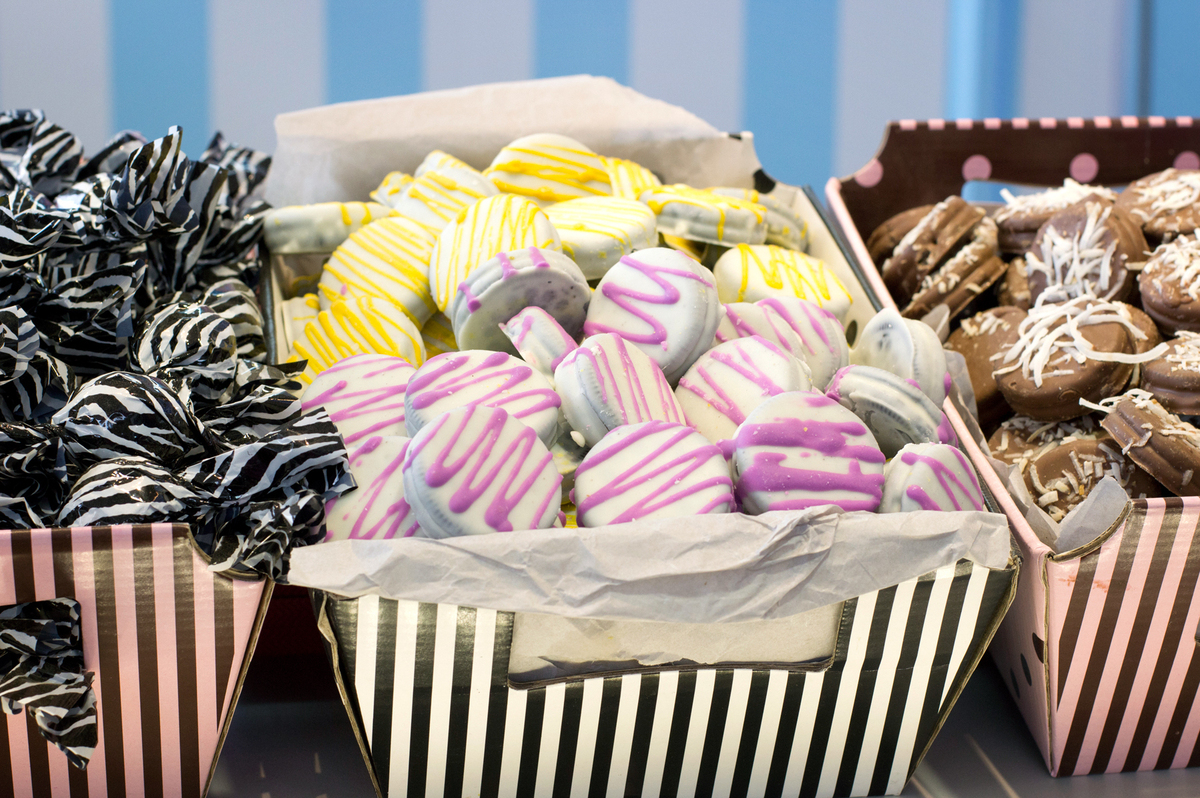 These high prices are due to the high cost of setting up and maintaining Mistura's temporary site, including water, sewage, electricity and security, event organizers tell La Republica.

But it's not just the event itself. The newfound popularity of certain foods also has García worried about the country's agricultural future.

Before the food boom, eating dishes like guinea pig and quinoa was a lifestyle of the lower class. Now that it's popular with tourists, farmers are asked to specialize in the crops, which may reduce biodiversity and move Peru toward a monoculture, García says.

"My biggest criticism of the food boom is that it's being sold like a development project, like it's going to solve a bunch of historical problems," Matta says.

Instead, it sweeps those problems under the rug, García says. By celebrating fusion, she adds, they forget to celebrate our differences, and they forget about the discrimination and violence that indigenous people face every day.

Still, Matta and García agree that the people behind this decade-long food movement and Mistura have good intentions — and it's a place to start.

Chef Albisu agrees. "I believe in culinary diplomacy. Food is the common bond in so many cultures," Albisu said. "Hopefully one day people are able to break bread more readily together and more easily, and what matters most is how it tastes."