Accessibility links
Giving Chickens Bacteria ... To Keep Them Antibiotic-Free : The Salt What does it take to get chickens off antibiotics? According to Perdue Farms, an added dose of the "good bacteria" known as probiotics can help crowd out the harmful microbes that make a chicken sick. 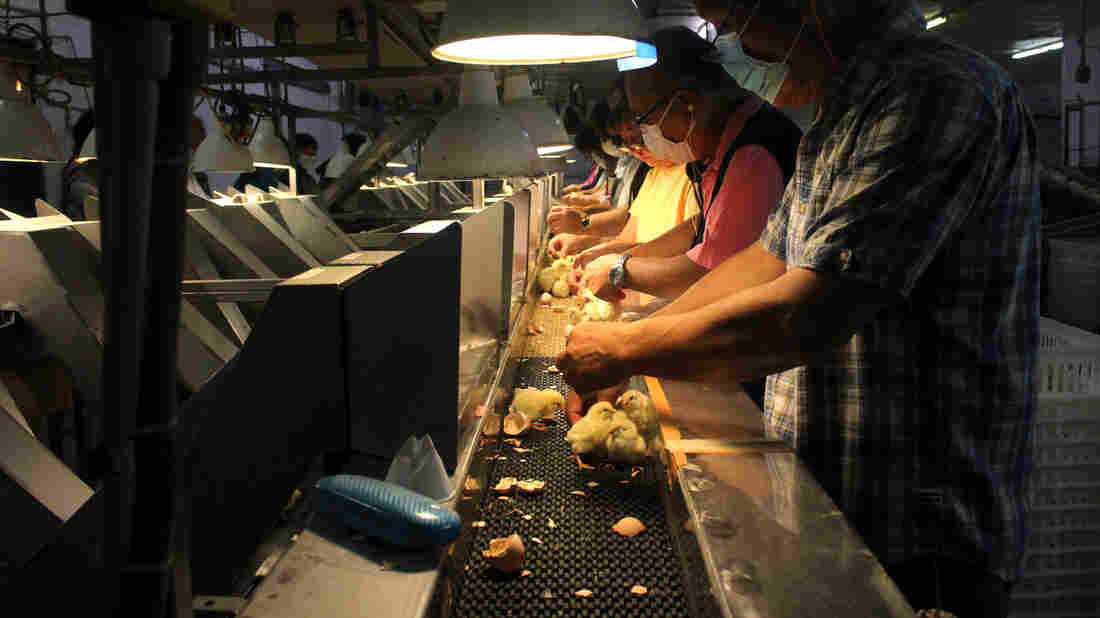 Within a day after chicks hatch, they are sorted by sex and shipped to farms. Some will be treated with antibiotics; others will not. Dan Charles /NPR hide caption 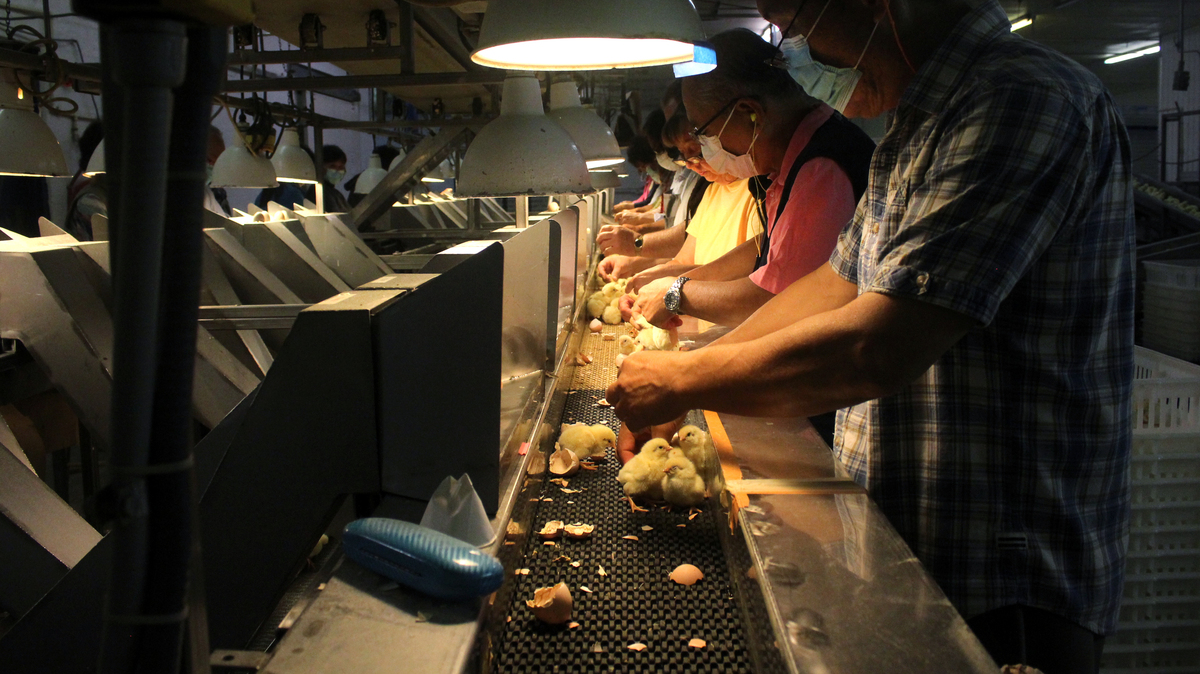 Within a day after chicks hatch, they are sorted by sex and shipped to farms. Some will be treated with antibiotics; others will not.

You know those foods and pills that promise to supply your body with "good bacteria?"

They may or may not make you healthier, but some of these "probiotics" do, in fact, appear to be effective in chickens. Poultry companies are turning to probiotics as an alternative to antibiotics, which have become increasingly controversial.

Perdue Says Its Hatching Chicks Are Off Antibiotics

"As we took antibiotics out of the feed, we put some other things in, such as probiotics," says Bruce Stewart-Brown, an executive at Perdue Farms. "We've increased the amount of probiotics by five times over the past five years. It's a significant part of our program."

Poultry companies have fed antibiotics to their chickens to fight off disease, and also to make them grow faster. Public health advocates have been pushing for an end to this practice, saying that it can lead to the emergence of more antibiotic-resistant bacteria.

Perdue Farms has not gone completely antibiotic-free, but it has reduced or eliminated some uses of antibiotics in its operations, and it is expanding production of chickens that are raised completely without antibiotics. According to Stewart-Brown, that has forced the company to search for new ways to keep chickens healthy, which is where probiotics come in. The idea is, all these "good bacteria" can crowd out the harmful microbes that make a chicken sick.

Stewart-Brown says that he was initially skeptical about probiotics. "Eight years ago, I would have said that they're not working in poultry. They're not very useful. Today, I'm saying that they are useful. Expensive, but useful." Chickens that got probiotics stayed healthier and grew faster than birds that didn't.

He declined to say exactly what products the company is using, but some poultry probiotics include live Enterococcus, Lactobacillus and Bifidobacterium microorganisms. 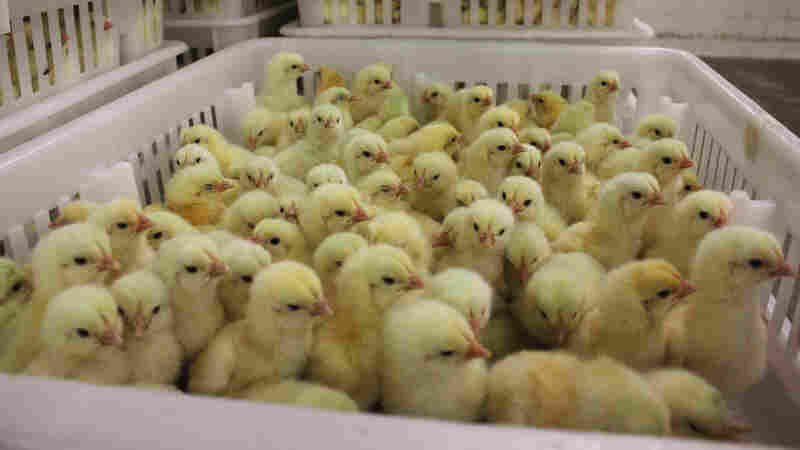 These chicks, at a Perdue hatchery in Salisbury, Md., have received no antibiotics. Dan Charles/NPR hide caption 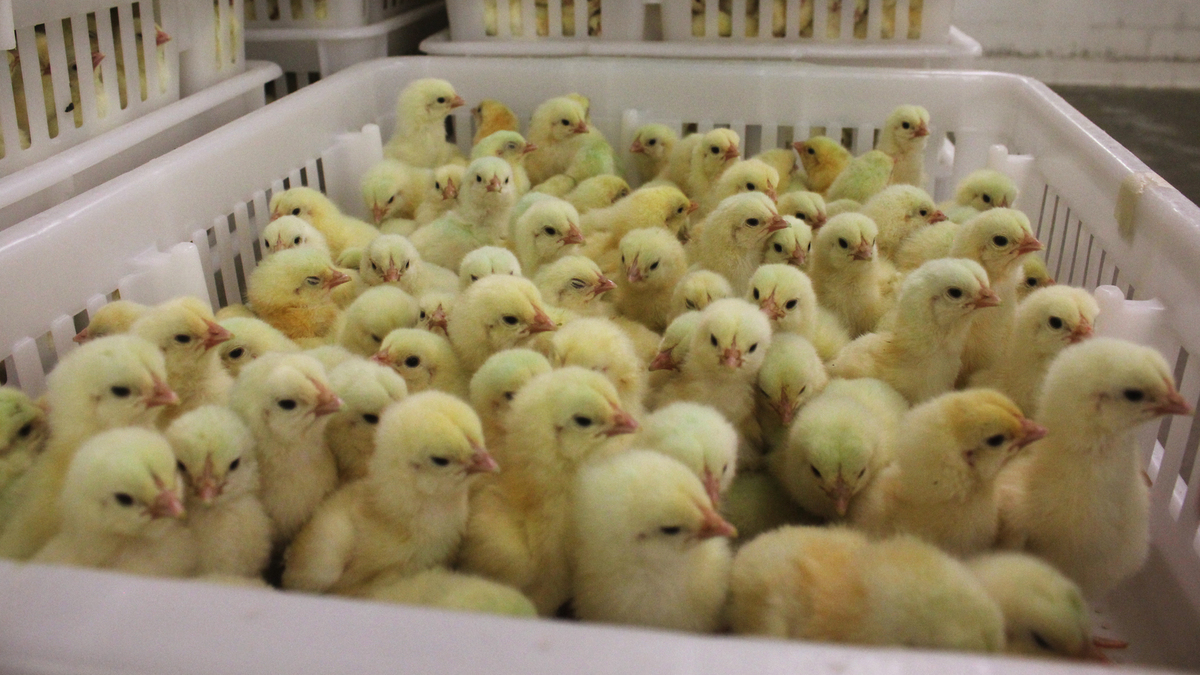 These chicks, at a Perdue hatchery in Salisbury, Md., have received no antibiotics.

In addition, Perdue Farms has eliminated the use of animal byproducts, such as fat, in chicken feed, after finding that chickens appeared to stay healthier on a vegetarian diet. (Chickens, of course, aren't "naturally" vegetarian; given the choice, they'll happily forage for insect larvae.) It now vaccinates its chickens against a wider array of diseases. It experimented with herbal remedies that were used by Coleman Natural, an organic poultry company that Perdue bought in 2011.

According to Stewart-Brown, all of this has increased the company's costs.

"Our birds grow a little bit slower, significantly slower than the rest of the industry, in general," he says.

But as long as consumers are willing to pay better prices for meat from chickens raised without antibiotics, the extra cost is worth it.