Accessibility links
To Stop Picky Eaters From Tossing The Broccoli, Give Them Choices : The Salt When healthier school lunch standards went into effect, many worried kids would toss their mandated veggies. But researchers say letting kids pick what they put on their tray can cut down on waste. 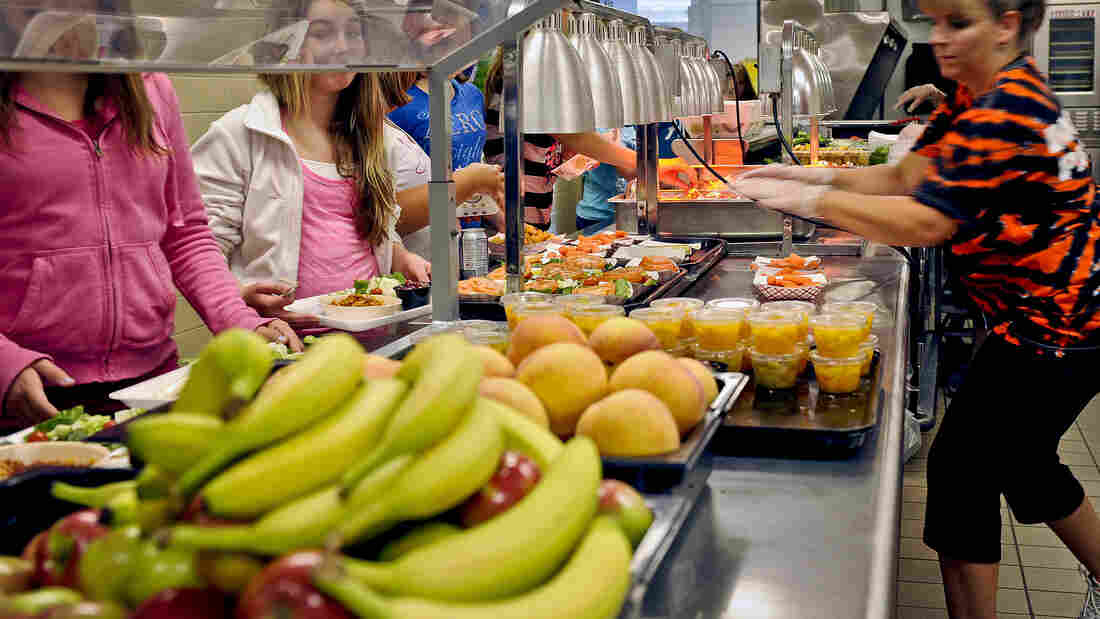 Students are given healthy choices on a lunch line at Draper Middle School in Rotterdam, N.Y., in 2012. To keep students from tossing out the fruits and vegetables they're served, researchers say it helps to give them a choice in what they put on their trays. Hans Pennink/AP hide caption 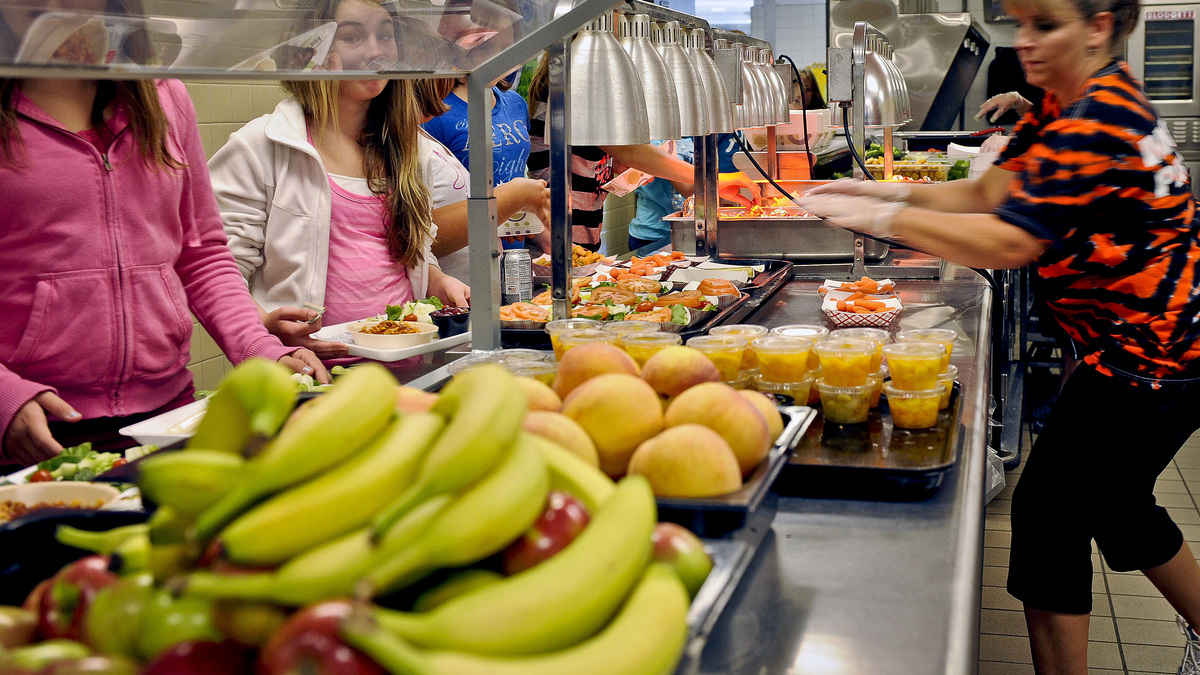 Students are given healthy choices on a lunch line at Draper Middle School in Rotterdam, N.Y., in 2012. To keep students from tossing out the fruits and vegetables they're served, researchers say it helps to give them a choice in what they put on their trays.

In many communities, the local school district is the largest food provider, filling thousands of hungry bellies every day. But trying to feed healthful food to some of the pickiest eaters can result in mountains of wasted food.

Now, many schools are finding that giving kids a say in what they eat can cut down on what ends up in the trash.

It's a lesson you can see in action in the lunchroom of Harris Bilingual Elementary School in Fort Collins, Colo. Kindergartners in light-up tennis shoes and pigtails march single-file into the cafeteria, sliding small trays along a salad bar.

"Alison, que quieres? Oh, broccoli, tambien," says Kate Kosakowski, a teacher's assistant at the school. She gives the pigtailed kindergartner a pat on the back and places several florets on the tray. Kids speak in both English and Spanish throughout the school week at Harris. Poudre School District, which includes Harris elementary, serves almost 15,000 meals a day.

The salad and fruit bar is a staple of this lunchroom. In 2012, the U.S. Department of Agriculture updated its school nutrition standards, mandating more fruits and vegetables on students' trays. So when one kindergartner tries to sneak past without taking a vegetable, Kosakowski swoops in.

"Oh, let's try something new today," Kosakowski says, grabbing a hold of the boy's tray. "Pick one to try." 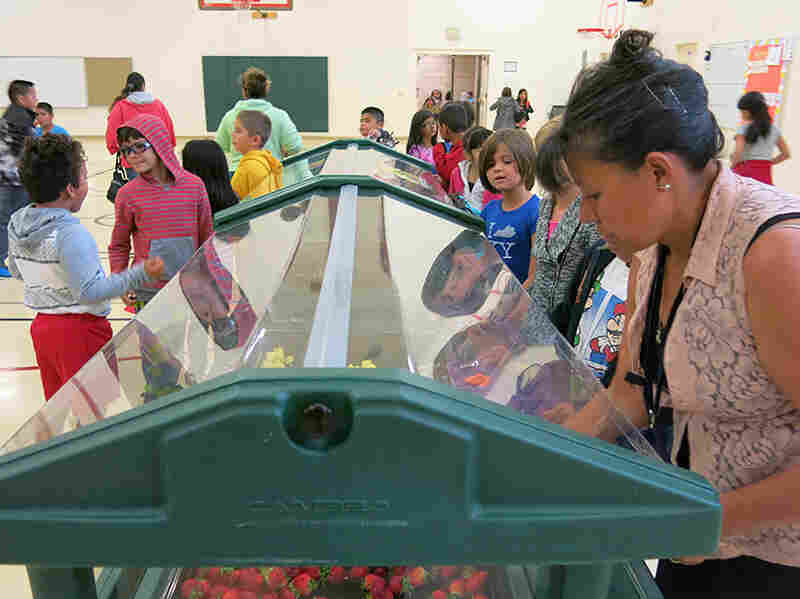 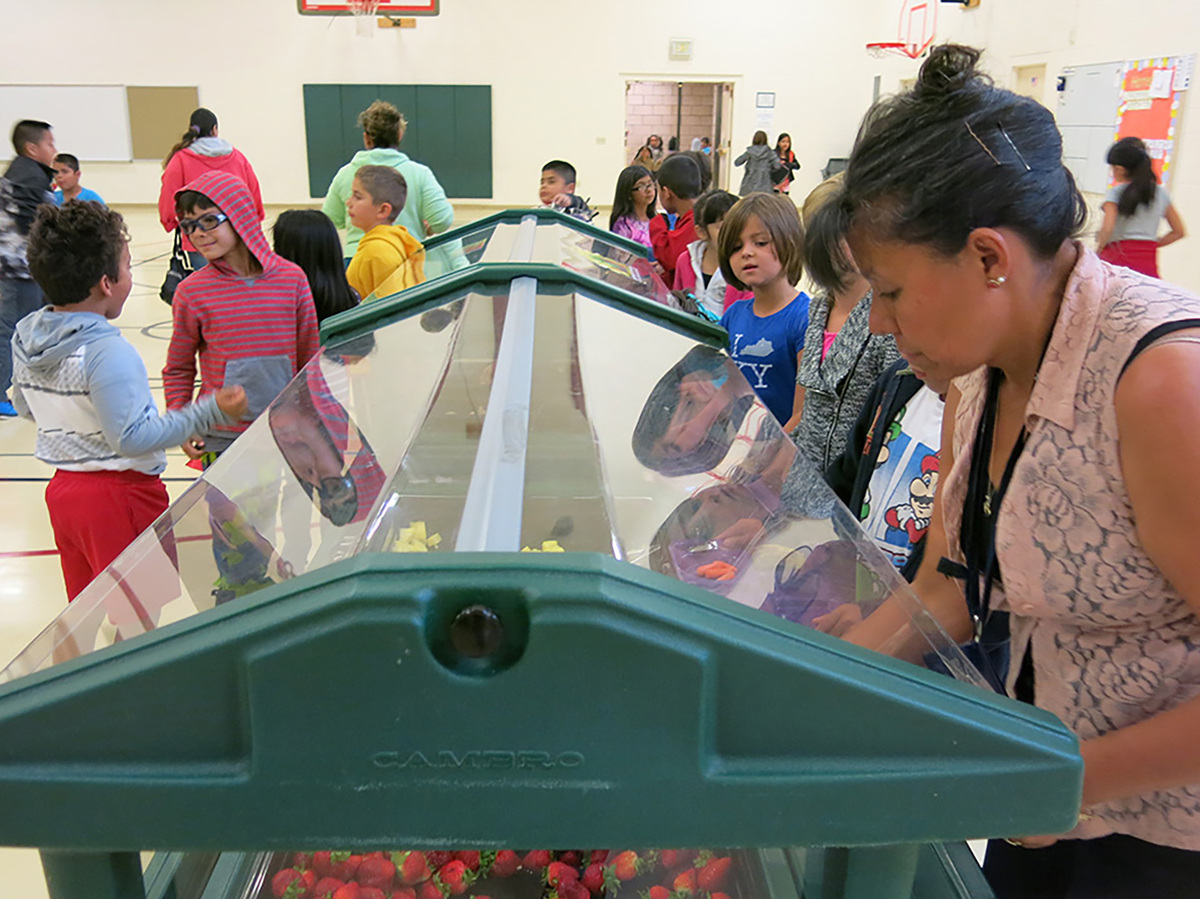 He relents and grabs some carrots. But there's nothing that says that picky kid has to eat what he takes. The school can provide the choices, but some kids just will not eat.

Nationwide, the National School Lunch Program feeds more than 30 million students each year. Food waste has always been a problem for large institutions like school districts. Studies have shown that kids throw away anywhere from 24 percent to 35 percent of the food on their trays.

But there was particular angst over these latest healthy lunch standards. Conventional wisdom says kids don't like vegetables and that by mandating more veggies on trays, waste was going to go up.

"Our goal as a department and a district is to make sure the last kid has the same choices as the first in the variety and the quality," says Craig Schneider, director of nutrition for the Poudre School District. "But we also don't want to have so much food out there that it's being thrown away."

Conventional wisdom doesn't give kids enough credit, Schneider says. A Harvard University study found that after the new standards went into effect, kids ate better, and the increased portions of fruits and vegetables didn't cause waste to go up. A Government Accountability Office report noted that many school districts have complained about increased waste, but it acknowledged a lack of data and summarized those notions of trash cans piled high with wasted veggies as anecdotal. Few studies have been published that compare plate waste from before and after the introduction of the new standards.

The key to cutting down on waste in the lunchroom is choice, according to researchers. By allowing kids to make their own food decisions, rather than asking lunch ladies to load up trays, you disarm their pickiness.

"Food is money," Schneider says. "So we really want to manage that cost. But also, we just don't want to be throwing away food. It's just that simple."

But waste in schools is still a huge problem. A Colorado State University research team found the average student throws away more than a third of the food on the tray, most of that being fruits and vegetables. That's a higher percentage than food wasted at home.

"It's really tough for the schools, because they're dependent on their clients, the students," says CSU nutritionist Leslie Cunningham-Sabo, who led the study. "And I think it's really tough to balance healthy food with the taste preferences of the clients."

Cunningham-Sabo says school districts can make subtle changes with big effects on food waste. She says when some schools have inverted lunch and recess, putting play before the cafeteria, food waste was cut by 30 percent.

"There's a lot of evidence to support having recess before lunch," she says. "And the kids get out there, they get to play, they get to socialize, they burn off some energy, and they come in hungry for lunch."

Other research shows healthy food marketing can change student attitudes about fruits and vegetables. Schools shouldn't be afraid to get creative and can rebrand vegetables as things kids would actually clamor to get their hands on, says dietitian Stephanie Smith. Try calling it "Super Power Cauliflower," she says, or instead of green beans, "Laser Beans."

"Involve the students. Let them help set the menu. Get them more involved," Smith says. "That way they have more buy-in, their school lunch participation increases, and hopefully, waste decreases."

Back at the lunchroom at Harris elementary in Fort Collins, Colo., fourth-graders clean their trays before raising their hands to be dismissed from the cafeteria.

They ate everything. But we as a society usually don't. We waste roughly 35 million tons of food a year. If consumers are really going to cut down on food waste, we'll all have to start eating our vegetables.

This story is part of the Harvest Public Media series Tossed Out: Food Waste in America. A version of this story appears on the Harvest website.