Accessibility links
The Gefilte Fish Line: A Sweet And Salty History Of Jewish Identity : The Salt Gefilte fish can be a hard sell even in its standard savory form. But some European Jews like it sweet, a preference that, surprisingly, overlaps exactly with a geographic and linguistic divide. 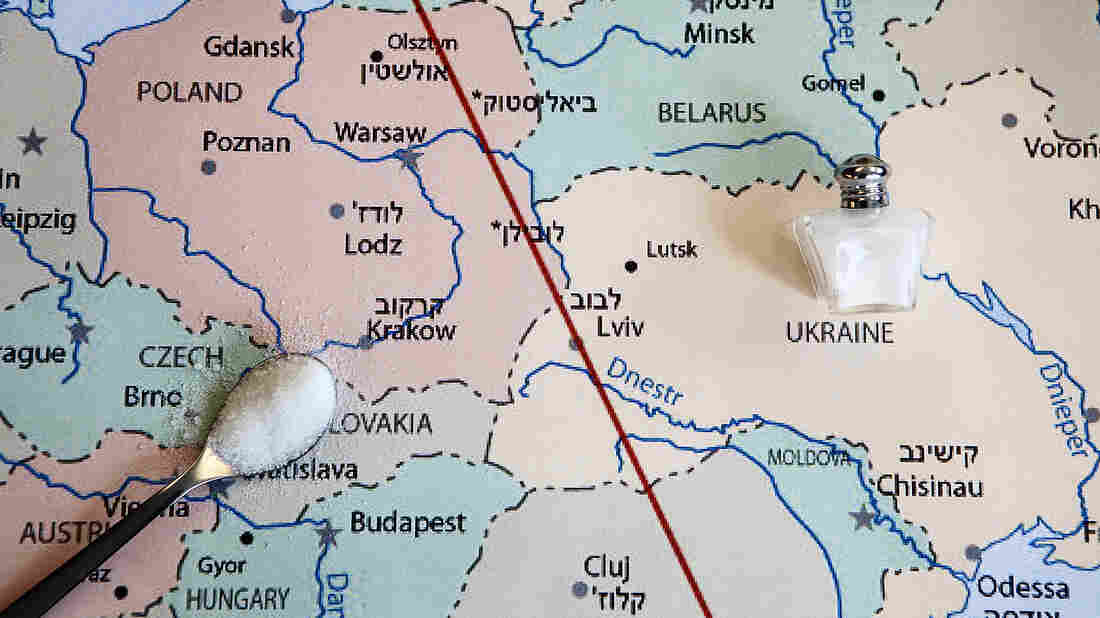 Sweet or salty? Historically among Eastern European Jews, how they liked their gefilte fish depended on where they lived. This divide created a strictly Jewish geography known as "the gefilte fish line." Claire Eggers/NPR hide caption 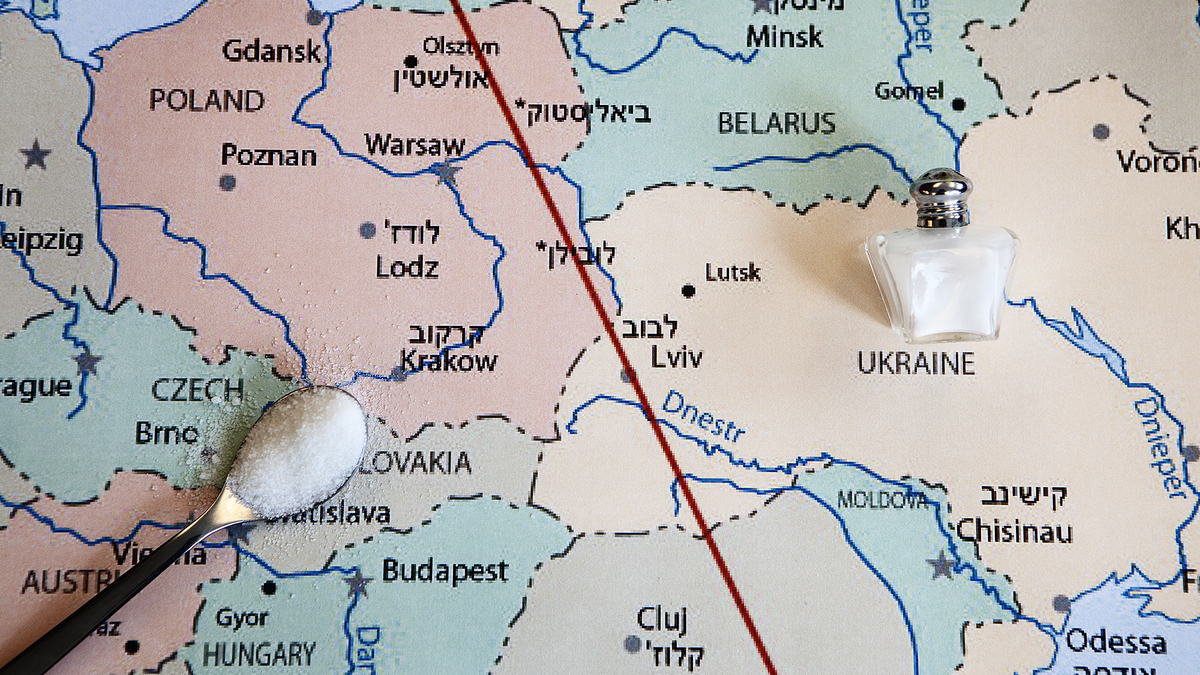 Sweet or salty? Historically among Eastern European Jews, how they liked their gefilte fish depended on where they lived. This divide created a strictly Jewish geography known as "the gefilte fish line."

Rosh Hashanah, the Jewish New Year, is a day when everything tastes like dessert. In symbolic hope of a sweet year to come, the table is positively sticky — honey marinades, honey cakes, raisin-studded challah bread. And, depending on where your family is from, sweet gefilte fish.

Gefilte fish, those oft-reviled patties packed in jelled broth, can be a hard sell even in the standard savory form. And with a big dose of sugar stirred in? It can be hard to swallow. But for Jews with roots in Poland, gefilte fish was always sweet. Always.

"I like to think of the gefilte fish sweetness variation as the Jewish version of the great European olive oil/butter divide," jokes Jeffrey Yoskowitz, co-founder of the Gefilteria, which makes small batch gefilte fish out of Brooklyn. On one side of the divide: sugared sweet gefilte. On the other — the side whose gefilte became standard in American Jewish cuisine — the fish is savory, seasoned with salt and lots of pepper.

Both Yoskowitz and his co-founder, Liz Alpern, have family roots in Poland and grew up with the sweet version. But in a nod to prevailing tastes (and to not mask good-quality fish), they settled on a bit of a hedge: a bit sweeter than the standard, but dialed back from the versions of their childhoods. 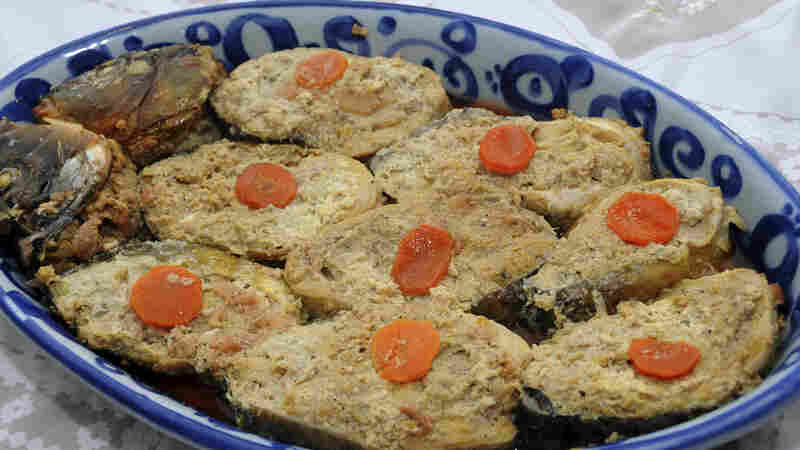 Sweet gefilte fish is fading from tables in many places. But even the better-known savory form of the fish can be a part of a sweet Jewish New Year. iStockphoto hide caption 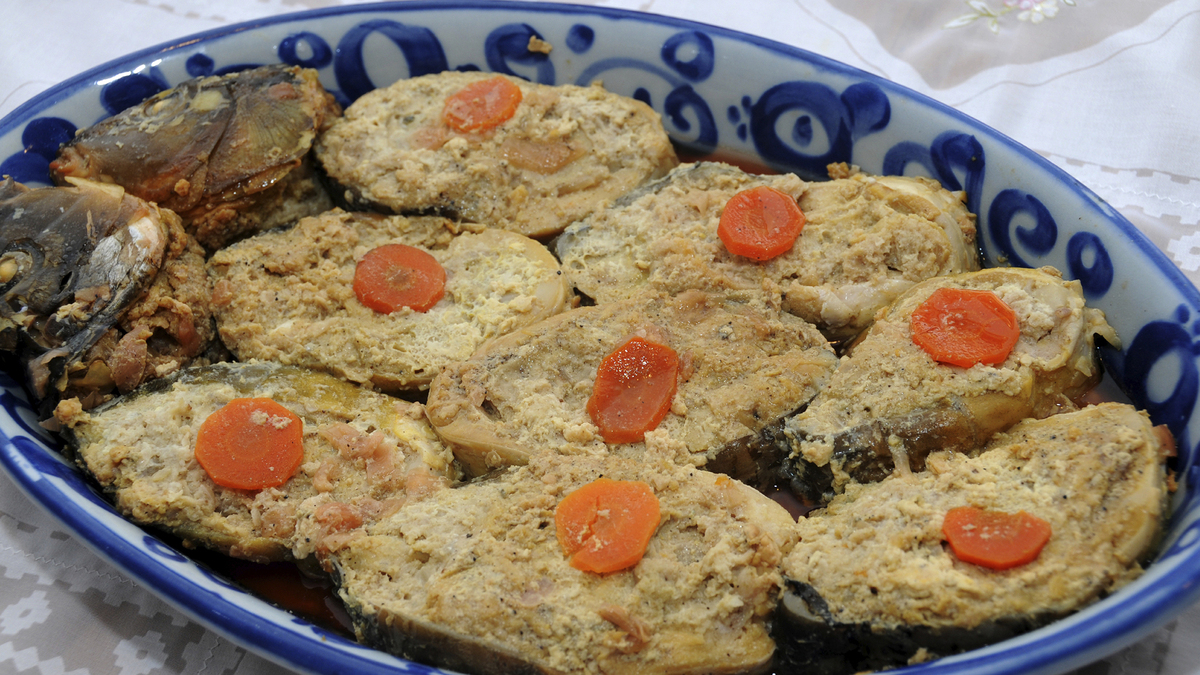 Sweet gefilte fish is fading from tables in many places. But even the better-known savory form of the fish can be a part of a sweet Jewish New Year.

"Of everything we considered when making our gefilte fish, sweetness was among the top considerations. It's so contentious," Yoskowitz acknowledges. Which raises the question — why?

It turns out this difference in gefilte fish comes down to the explosion of a new industry in early 19th-century Poland: sugar beets.

Imported sugar was a highly valued commodity in Europe — "the oil of that time," jokes culinary historian Gil Marks, author of The Encyclopedia of Jewish Food. And in the face of this pricey import, the first sugar beet factory opened at the turn of the 19th century, in what is now southern Poland. From there, the industry (with heavy Jewish involvement) took off, and sugar made its way into everything.

"Other Jews had savory noodle kugels," notes Marks. "You didn't have sweet challah. The idea of putting sugar into anything else was absurd." But Polish Jews began to put sugar into all of these dishes. Previously peppery kugels. The now-sweet-and-sour stuffed cabbage. And gefilte fish.

If you trace this sweet-savory divide, you begin to see more than just a difference in palates. In the mid-1960s, Yiddish language scholar Marvin Herzog was perhaps the first to observe that plotting the boundaries of two of the main Yiddish dialects — the central Polish/Galician (Poylish/Galitzianer), and the more northern Lithuanian (Litvak) — creates a map that lines up exactly with the sweet and savory culinary lines. It's a division that doesn't map to any other political or natural border — a strictly Jewish geography later dubbed "the gefilte fish line." Tell us how you eat your gefilte fish, and we'll tell you who you are.

And that gefilte-fish-as-shorthand-to-culture can come in handy. Niki Russ Federman's family store, Russ and Daughters, has been selling fish on New York City's Lower East Side for over 100 years (Federman is the fourth generation behind the counter). When her great-aunt Hattie, one of the titular daughters, stepped into a shoe store one day as a young woman, a smitten clerk asked, "How does your mother make her gefilte fish? Is it sweet?"

"How did you know?" asked Hattie.

"I'll be there Friday night," he responded. The shoe salesman showed up for shabbos dinner, ate the familiarly sweet gefilte fish, and subsequently joined Hattie behind the counter as her husband.

But despite this sweet start, the gefilte fish at Russ and Daughters is now savory. "Not Galitzianer," acknowledges Federman. "Tastes have really changed."

The Brooklyn-based Gefilteria sells a two-tone terrine of whitefish and pike topped with salmon and steelhead trout. For the home cook, they've come up with a somewhat simpler version. But, like the commercial product, it's got that touch of Galitzianer sweetness.

Heads, bones and tails from fish (A fishmonger can save these for you if he/she sells you fish as a fillet. Just ask.)

*If you prefer, you can skip the broth and poaching, and cook the gefilte fish as a terrine. Oil a loaf pan, smooth the mixture in (with a light coating of olive oil or canola on top). Bake at 350 degrees Fahrenheit, rotating from top to bottom rack halfway through, until set with just a bit of browning in the corners (~40 minutes). Chill, slice, and serve.