Accessibility links
A Bumpy Ride: Airplane Food Through The Decades : The Salt The food on U.S. planes has gone from bad to nonexistent in coach class. But airplane meals have had ups and downs before. Now, airports and food delivery services are aiming to close the gap.

A Bumpy Ride: Airplane Food Through The Decades

A Bumpy Ride: Airplane Food Through The Decades 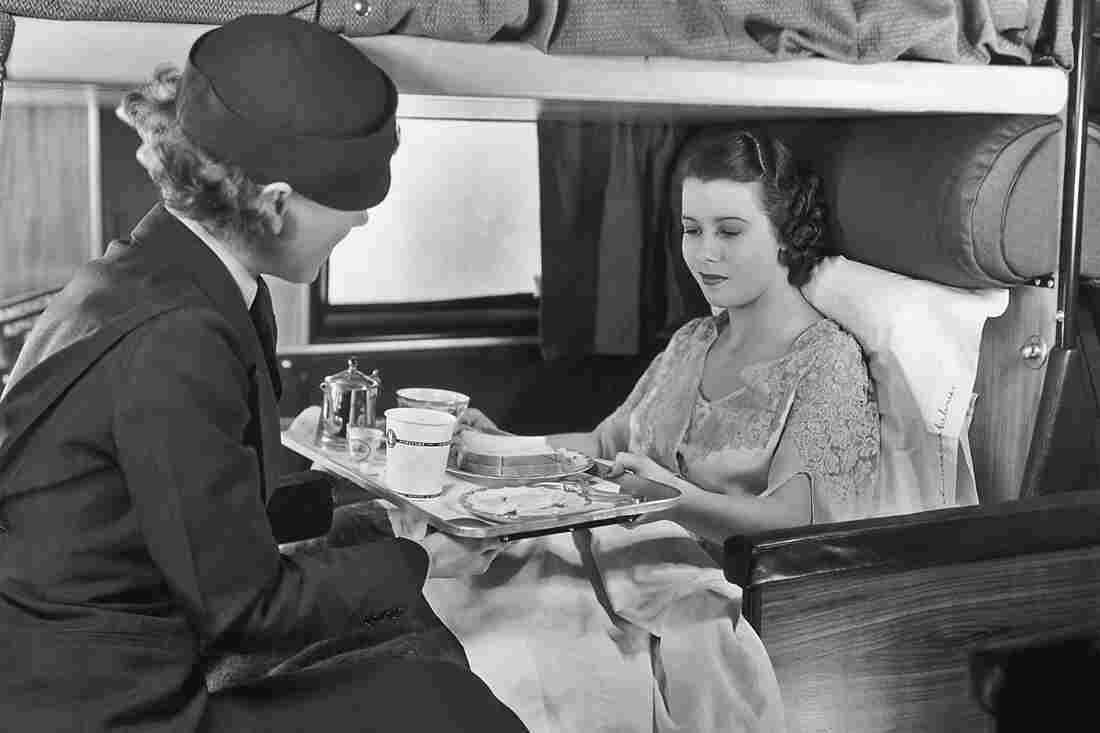 The good old days: A flight attendant serves coffee and sandwiches to a passenger on board an American Airlines flight, circa 1935. Frederic Lewis/Archive Photos/Getty Images hide caption 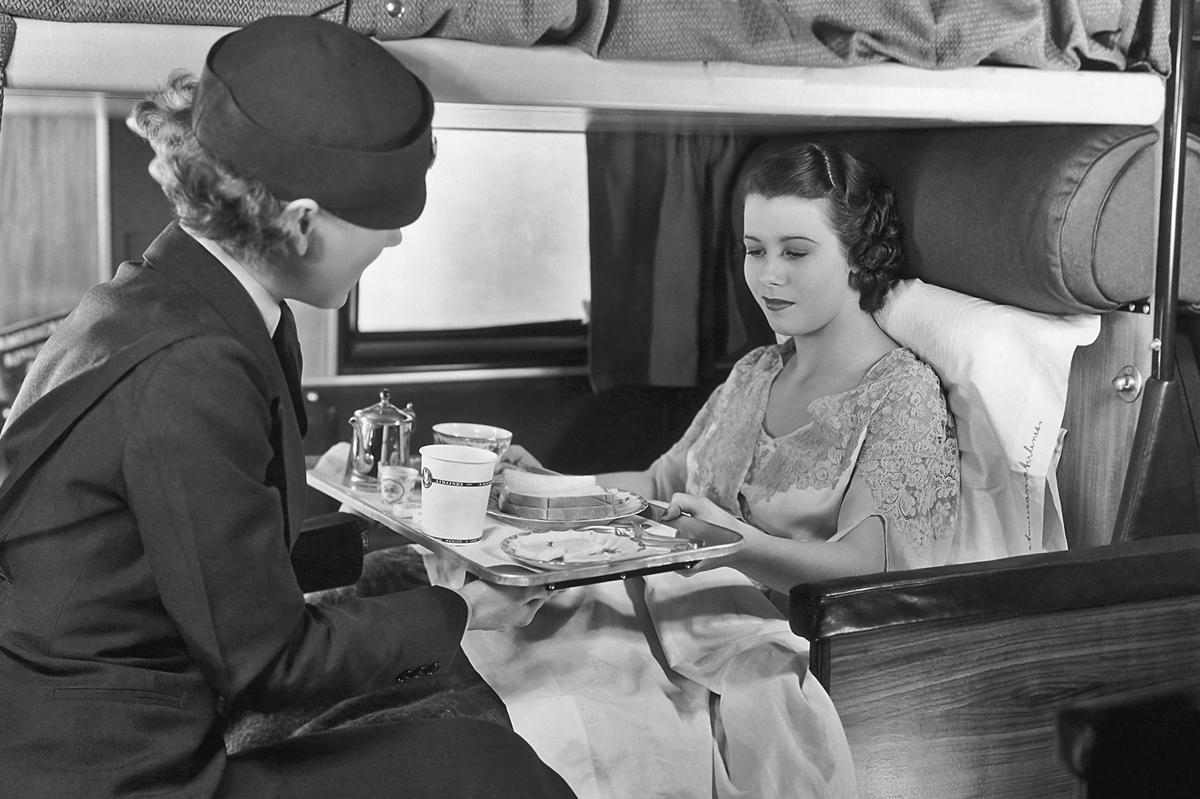 The good old days: A flight attendant serves coffee and sandwiches to a passenger on board an American Airlines flight, circa 1935.

People who fly coach on domestic carriers these days don't expect much from the in-flight service beyond watery soda and maybe a salty snack. Or if they're in the air for a few hours, they might get the option to buy a "meal" that looks like a cross between hospital food and school lunch. But that's not how it used to be.

Back in the 1920s, just a few adventurers took flight — think Amelia Earhart and Charles Lindbergh — and they usually brought their own sandwiches, according to the History Channel blog, Hungry History.

"In a 1938 article detailing the food service program at Newark Airport, Mrs. G. Thomas French explained how she managed the kitchen program for the entire airport. She proudly noted that her kitchen 'does all our own baking – pies, tarts, pastries, cream roll desserts, breads and muffins.' She even knew individual passengers' likes and schedules, and wouldn't serve the same meal two consecutive Mondays if she knew that meant a specific traveler would have the same meal twice," writes Stephanie Butler of Hungry History.

Then, in the 1950s, more people started flying, and it got more expensive to feed all those new passengers. So the airlines started cutting the food budget.

"Between the '60s and the '80s, it just got worse and worse," says Jason Kessler, the editor and founder of Fly and Dine, a food blog for frequent fliers. It was like airlines began using "a weird outdated robot who was putting things down a conveyor belt with no thought or care," he tells The Salt. Think tin foil-topped packages of mushy mystery meat.

Add to that the oil crisis and airline deregulation, which further brought fares down and competition up, and the airlines didn't have as much cash to spend on customers. "Cost made good food go away," Kessler says.

That is, of course, unless you were traveling internationally.

If you are hungry to relive those polyester days of "five-star dinners and unlimited cocktails" on an international flight of the 1970s, head to Los Angeles. A film studio hosts a retro dinner on a stage set up to look like a Pan Am double-decker 747. Note: You'll have to shell out a couple hundred bucks and show up dressed to the nines in period garb. 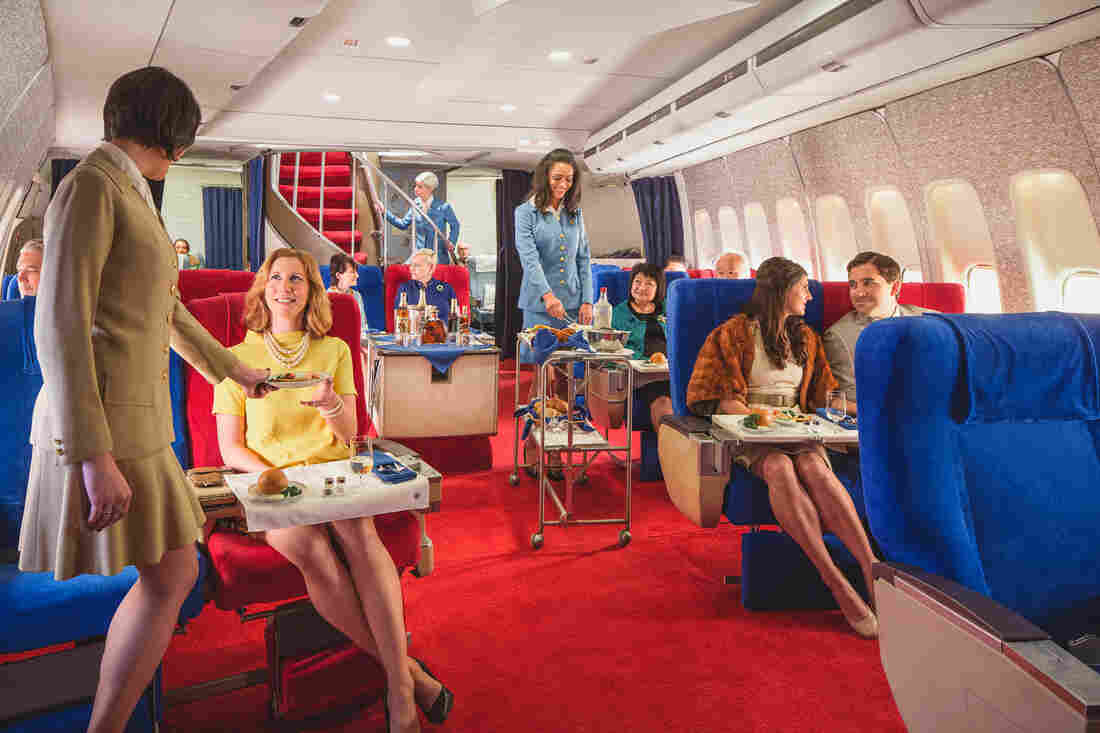 Break out the polyester: For a price, you can go back in time on an L.A. sound set and enjoy a meal in the style of an international Pan Am flight in the 1970s, complete with linens and china. Courtesy of Michael Kelley/Air Hollywood hide caption 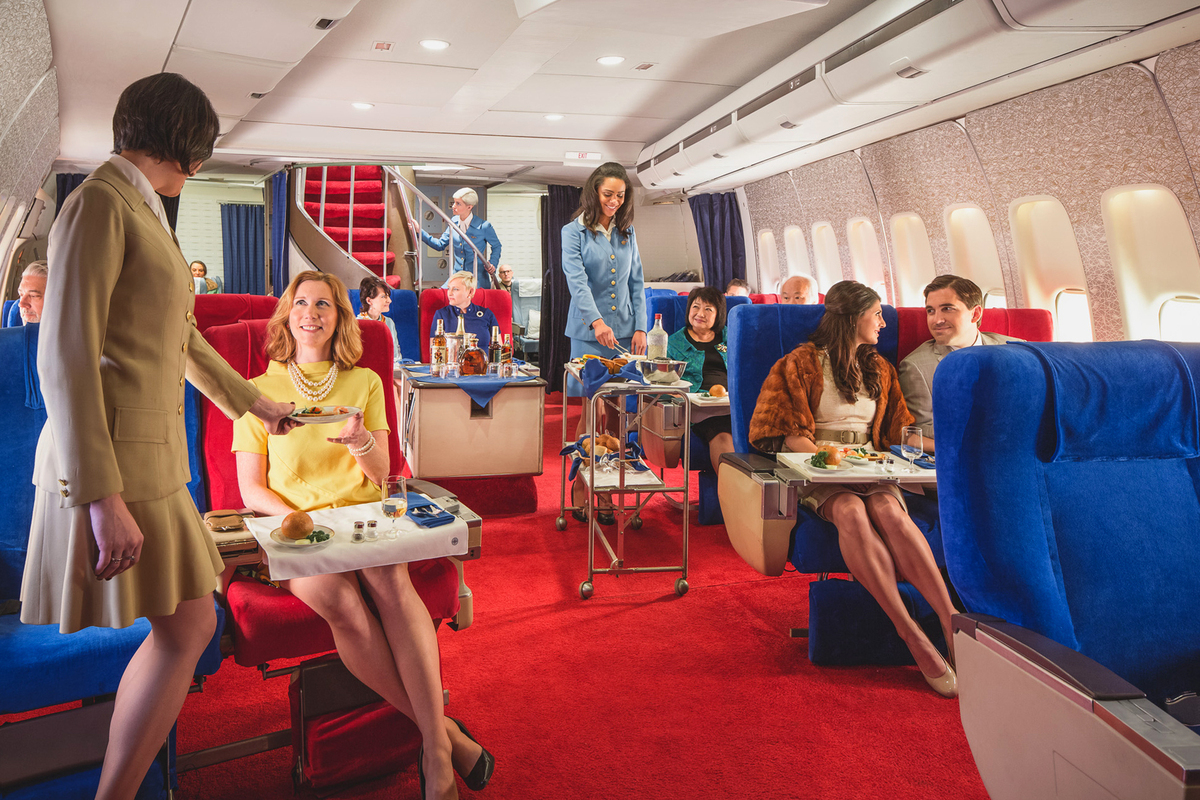 Break out the polyester: For a price, you can go back in time on an L.A. sound set and enjoy a meal in the style of an international Pan Am flight in the 1970s, complete with linens and china.

By the go-go 1980s, airlines began looking for ways to distinguish themselves. One way to do that was to improve the food. "Determined to remove the stigma attached to airline food, in 1988 American became the first airline to enlist the expertise of prominent and well-respected chefs to help craft the direction of its in-flight food service," says an American Airlines press release from 2008. 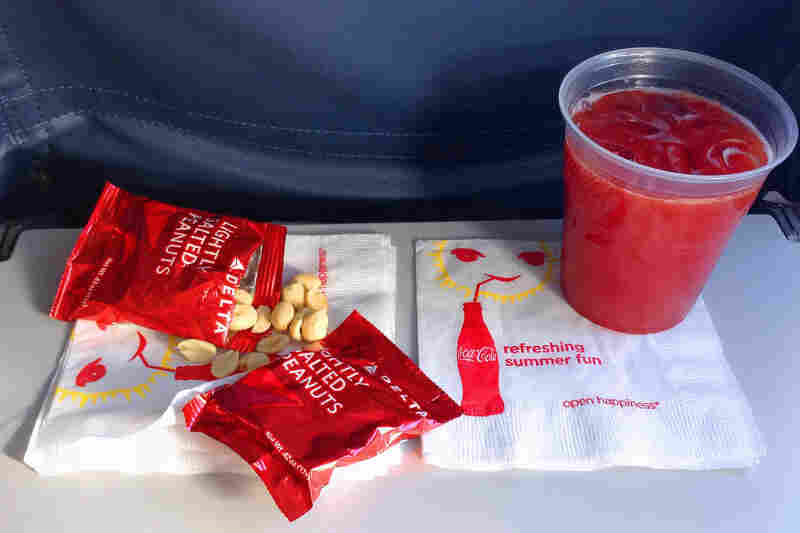 Hungry? These peanuts and drink, served aboard a Delta flight in July, are about all you'll get on domestic flights these days. Ron Cogswell/Flickr hide caption 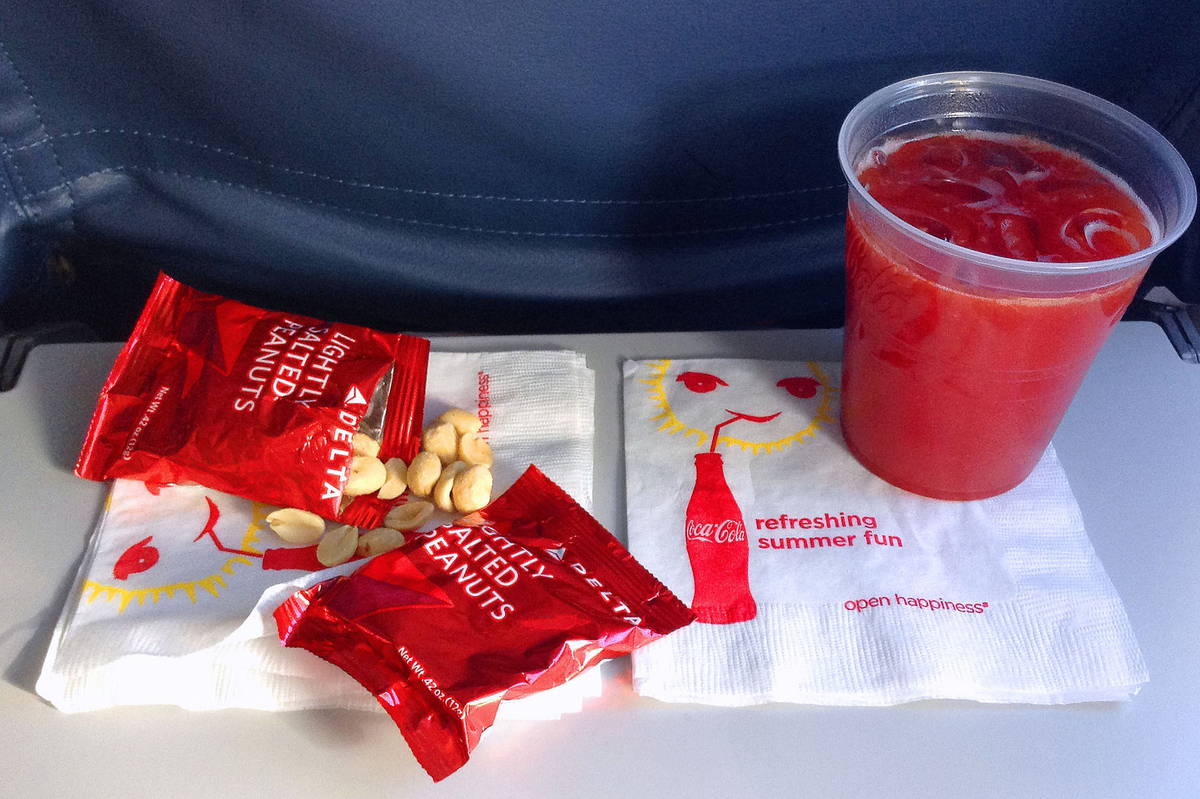 Hungry? These peanuts and drink, served aboard a Delta flight in July, are about all you'll get on domestic flights these days.

Chef's Conclave was discontinued in 2013, around the time American began its merger with US Airways.

"We actually no longer use celebrity chefs in our menu design process," Laura Nedbal, a spokeswoman for American, tells us via email. From now on, she writes, the airline will be turning to "internal talent" to create its passenger meals.

Still, amid the economic turmoil and terrorist threats of the past two decades, the quality and quantity of airline food has continued to decline, particularly in coach.

"The airlines run so lean that they have to cut costs wherever they can," says Kessler. "Instead of offering meals to everybody, you have to buy it on board or you don't get anything."

Flying This Holiday? Here Are A Few Tips To Survive Airline Food

So what's a passenger in the cheap seats to do? Pack your own grub or grab something at the terminal, which isn't nearly as bleak-sounding as it used to be.

For example, the newly rehabbed Tom Bradley International Terminal at LAX boasts a handful of boutique restaurants developed by celebrity chefs. And many major terminals around the country now house upscale wine bars, full-service diners and grab-and-go fare — including salads, yogurt and other, more healthful options than in years past.

Technology is also helping to connect passengers with food beyond the confines of the airport.

If you're flying into Finland or Amsterdam, you can now shop online midflight and pick up your groceries at the airport in refrigerated lockers. Now that's an idea we'd like to see land on our side of the pond.