Accessibility links
Everything But The Squeal: How The Hog Industry Cuts Food Waste : The Salt Large-scale hog operations get a bad environmental rap. But when it comes to processing the animals, the industry is a model of efficiency, making use of every last bit in sometimes surprising ways. 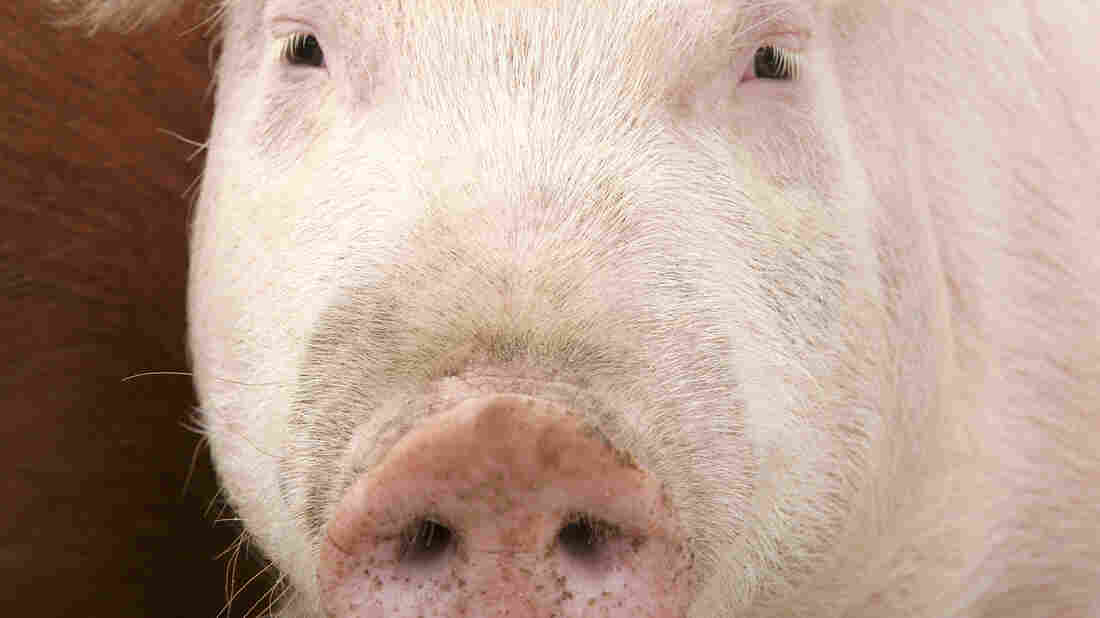 The rendering industry likes to call itself the world's oldest recycling system. Nearly 100 percent of processed pigs will eventually get used — as meat and in uses as varied as medicine and pet food. iStockphoto hide caption 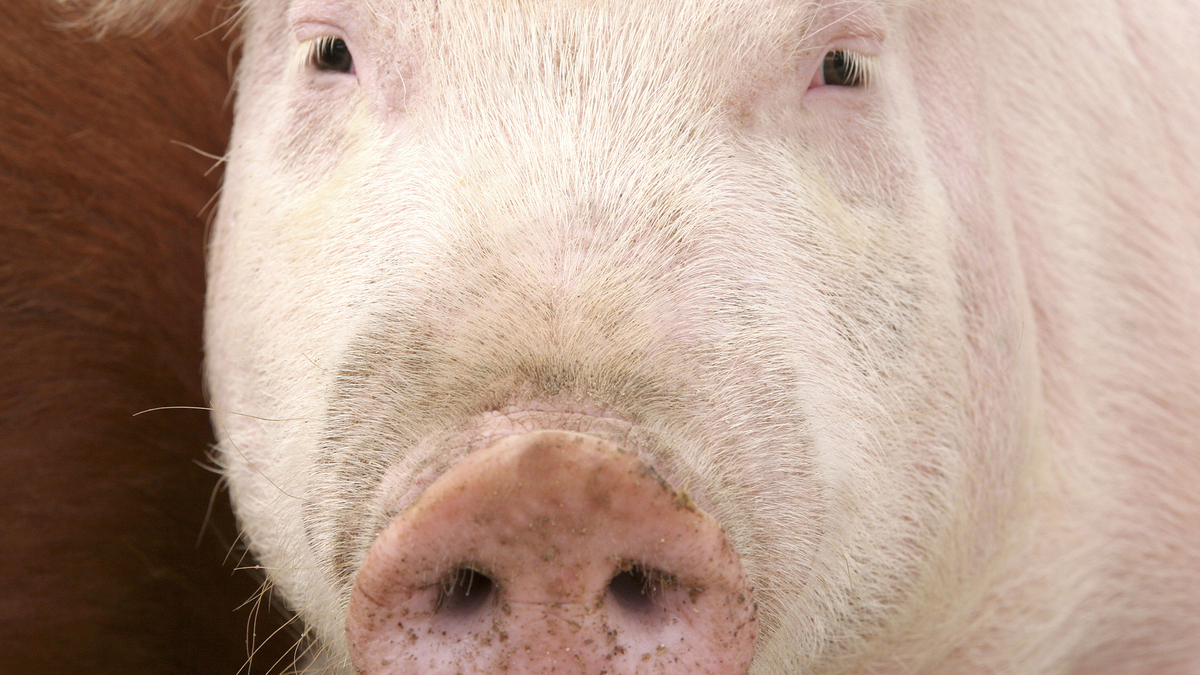 The rendering industry likes to call itself the world's oldest recycling system. Nearly 100 percent of processed pigs will eventually get used — as meat and in uses as varied as medicine and pet food.

A tour of a pork processing plant takes a hard hat, waterproof boots and a strong stomach.

Americans eat just half of the meat produced by farm animals. So what happens to the rest of the animal? I arrive at the Farmland Food plant in Milan, a factory in northeast Missouri, for a tour.

The plant has two sections, manager Tim Messman informs me. There's the "kill side," or slaughterhouse, where the animal is cut up into edible parts like, say, a pork chop. And then there's the rendering side, where the pig is broken down into fats and proteins, nonedibles that end up in dozens of other products — some of which may surprise you. 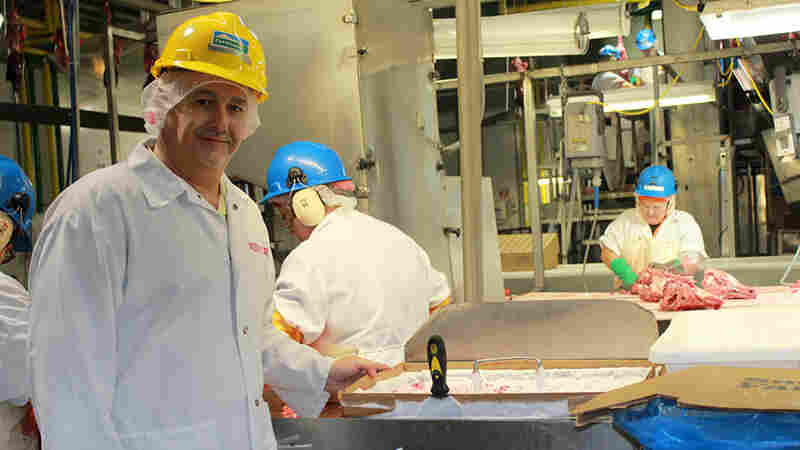 Todd Scherbing, Smithfield Foods' senior director of rendering, holds a tray of pituitary glands that are cut from hogs on the line at the Farmland Foods plant in Milan, Mo. Peggy Lowe/Harvest Public Media hide caption 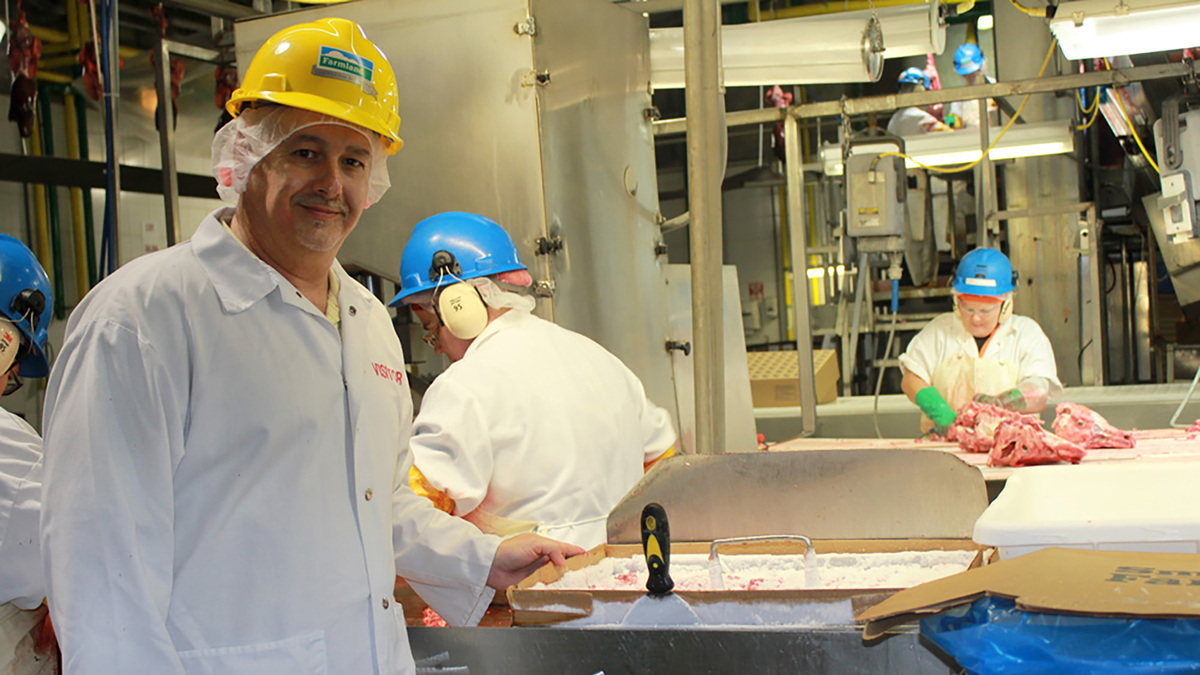 Todd Scherbing, Smithfield Foods' senior director of rendering, holds a tray of pituitary glands that are cut from hogs on the line at the Farmland Foods plant in Milan, Mo.

The tour begins at the end for the animal: the so-called disassembly process. The hogs, stunned unconscious by ingesting carbon dioxide, hang from a back leg on large hooks, moving along one by one on a line. A worker jabs the animal at the throat with a knife, and the blood pours out into a trough. That's the first part that will be rendered.

"Rendering has been around for a very long time, back to when the Native Americans realized that if you poured blood on your corn crops they grew better because it's a good fertilizer," says Jessica Meisinger, director of education, science and communication at the National Renderers Association.

For centuries, tallow — or beef fat — was made into candles and soap, among other things. These days, grease is made into biofuels; animals, into livestock feed, pet food and pharmaceuticals.

The association likes to call rendering the world's oldest recycling system. That green image might surprise you, considering that not every step in the production of pork is environmentally friendly: Livestock farming is one of the largest sources of global greenhouse gas emissions. But at the processing end, things get much more efficient.

"We sell everything but the squeal," says Todd Scherbing, senior director of rendering for Smithfield Foods, which owns the Farmland plant.

Back at the plant, the line of hooks snakes along the ceiling — I see hog heads, livers and other body parts moving from one point to another. At one stop, we find a tray, covered in frost and holding tiny red beads. Scherbing says they are pituitary glands.

Medicines like insulin and the blood thinner heparin are produced from hog byproducts, as are the "cillins" — amoxicillin, ampicillin and penicillin.

It's because of those kinds of uses that meat processing ranks as one of the most efficient in the food chain. Just 4 percent of meat product is lost to waste during processing in North America, compared with 10 percent of grain products, according to the Food and Agriculture Organization of the United Nations.

The industry processes some 56 billion pounds of raw material annually in the U.S. and Canada --enough, it says, to fill all landfills within four years.

But rendering isn't just efficient; it's also quite profitable — a $10 billion business. Smithfield, the world's largest pork producer, is a $14 billion company, with $1 billion coming from rendering.

"Once you get to the processing stage, the manufacturers often own the product at that point. It's certainly in their interest to use every little bit of it that they can," says Dana Gunders of the Natural Resources Defense Council, who studies food waste.

Entering the rendering side of the plant is a physical blow: It's hot and loud. My glasses fog up. I gag several times at the smell, which I'm told is decomposition of "raw material" — bone, skulls, fat, skin that will go on to other uses.

The raw material is crushed, then sent to the supercooker — a huge barrel-shaped machine that is essentially a giant deep fat fryer set at 270 degrees. That creates sterile bone and meat meals, both wet and dry, which are made mostly into food for animals — including hogs raised by Smithfield subsidiary Murphy-Brown, Scherbing says.

Pet food, livestock feed and biofuels each will use about 30 percent of all the rendered product in the U.S. The remaining 10 percent goes to products as varied as cosmetics and crayons, Meisinger says.

Eventually, Scherbing says, nearly 100 percent of the animal will get used.

"We actually even collect the hair off the hogs. We take that, we cook that, we dry that down and then put that into our process," Scherbing says. "So even the hair is recycled."

This story is part of the Harvest Public Media series Tossed Out: Food Waste in America.

Earlier versions of this story reported that the hogs were "stunned by an electric bolt." In fact, they are lowered into a pit of carbon dioxide that knocks them unconscious. (Corrected Oct. 28.)