Accessibility links
GMOs Are Old Hat. Synthetically Modified Food Is The New Frontier : The Salt Scientists hyping synthetic biology say it may one day give us biofuels, drugs and organisms that will solve hefty global problems. But synthetic biology food is already here, and causing controversy. 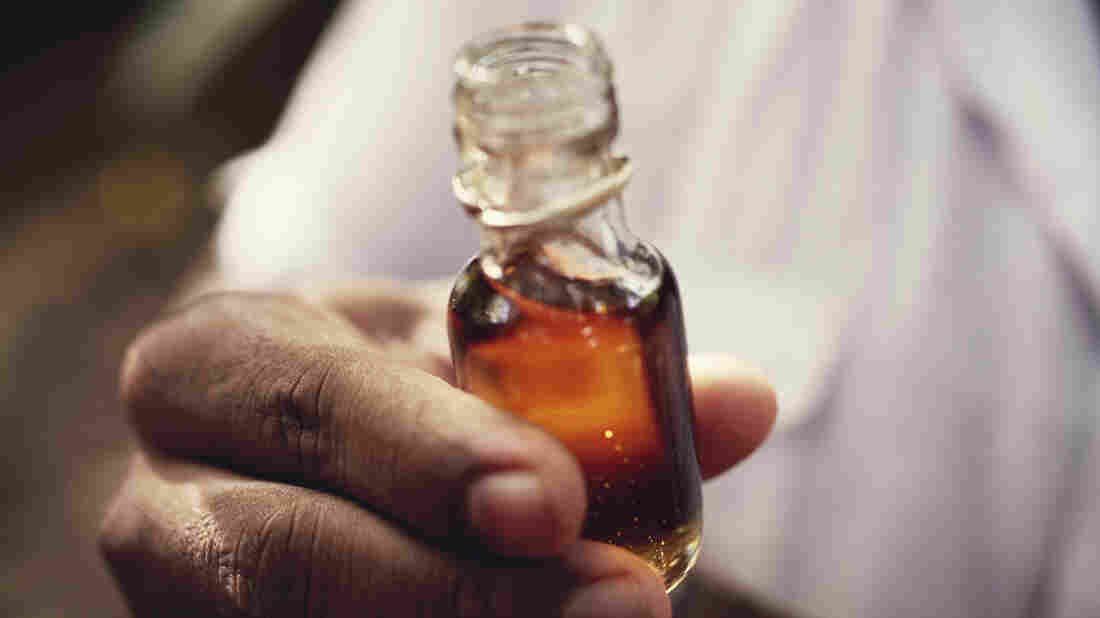 The vanillin made through synthetic biology will be used in flavorings sold in the U.S. by International Flavorings & Fragrances. iStockphoto hide caption 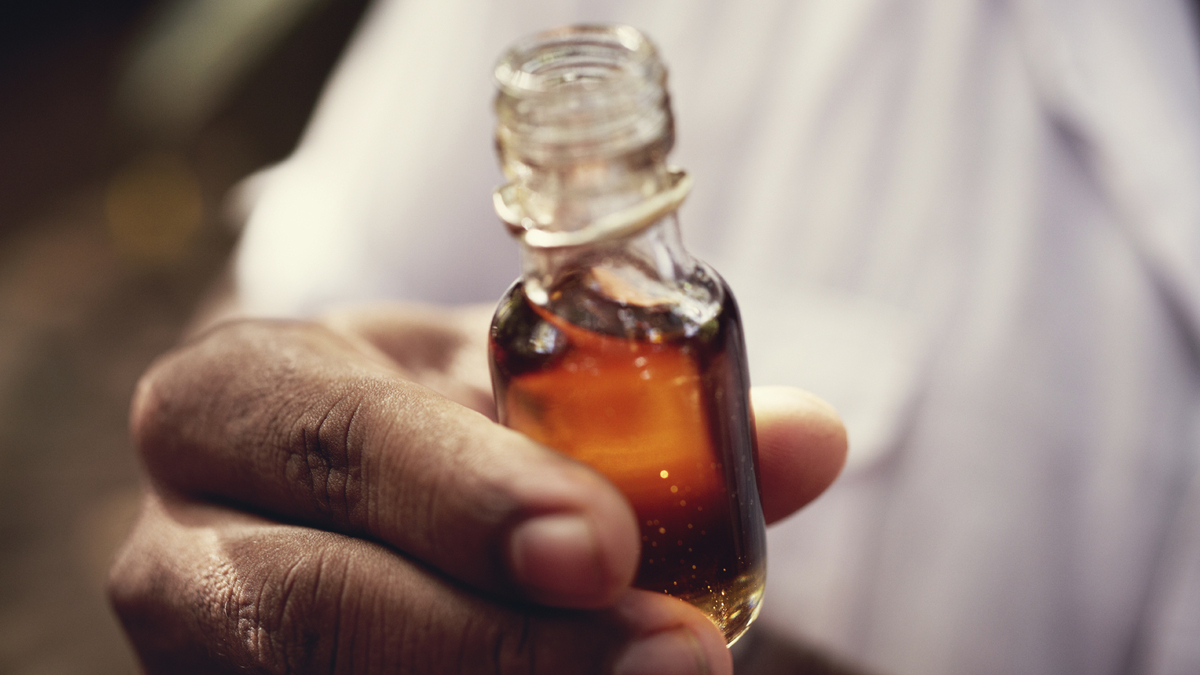 The vanillin made through synthetic biology will be used in flavorings sold in the U.S. by International Flavorings & Fragrances.

Genetically modified organisms are ancient, technologically speaking. Though some consumers may just be discovering that they're in the food system (and getting riled up about labeling them), farmers have had access to them since 1996.

But there's a new technology on the scene, adding a twist to the already complicated conversation about GMOs in our food: synthetic biology.

In essence, synthetic biology is about designing and building workhorse organisms that can make things more efficiently than nature (or make things we might need that nature doesn't make at all). According to Todd Kuiken, a senior program associate with the Synthetic Biology Project at the Woodrow Wilson International Center for Scholars, "It's the next stage of genetic engineering."

While there's been far more hype around synthetic biology's potential to create drugs, biofuels and even designer creatures, some of the most recent "synbio" products to hit the market are actually (somewhere) in our food.

Synbio vanillin, marketed as an alternative to artificial vanilla flavor, was rolled out in the U.S. this summer. But don't expect to be able to locate it in your local supermarket. Its maker, International Flavors & Fragrances, the U.S. partner of a Swiss company that invented the technology, is keeping mum about which food companies are using it.

While genetically modified seeds typically contain genes from another organism that bestow a plant with a new defense mechanism, making synbio food involves taking genes from a plant and giving them to yeast to make the same compound the plant makes, but much more efficiently, via fermentation.

Evolva is the Swiss synthetic biology company that developed the synbio vanilla; it also has synbio saffron, the antioxidant resveratrol and stevia in the pipeline. All are expected to go to market in the next two years. The main advantage of synthetic biology foods, Evolva claims, is that they can be made in a lab, rather than in a field that has to be tended by laborers and is subject to unpredictable variables like weather.

As we've reported, saffron is one of the most labor-intensive and expensive crops in the world (there are lots of fake versions out there). And the sweet molecule in the stevia plant occurs only in tiny quantities — well below 1 percent of the plant's total composition, which drives its cost up, too. Evolva's synbio resveratrol, the antioxidant that occurs naturally in red wine and chocolate, will be available this fall, and could get snapped up by supplement companies peddling the chemical's supposed anti-aging benefits.

Artificial vanilla flavoring, meanwhile, is cheap, but it's derived from petrochemicals and paper mill waste, and thus can't be labeled "natural." So Evolva saw an opportunity: Synbio vanillin, the name of the compound in the vanilla bean that imparts most of its flavor, can be labeled "natural" because it's made from fermentation, according to the Flavor and Extracts Manufacturers Association. (Flavorings and supplement manufacturers aren't required to get approval from the Food and Drug Administration before selling their products.)

Evolva claims its vanillin "will have a better and more rounded taste" than the artificial vanillin that's in most of the vanilla-flavored food products out there. (The biotech company acknowledges its product still won't taste as good as real vanilla extract from the bean, which, as we've reported, has more than 250 flavor and aroma compounds that give it its mouth-watering robustness.)

Primarily, Evolva wants to "make these expensive and scarce products more affordable" and available, CEO Neil Goldsmith tells The Salt. And Evolva's process is cost-effective and sustainable, he says.

The company also says it has performed rigorous safety tests. And as for the vanillin — chemically, it's identical to the artificial vanillin already on the market, so the flavor industry group has designated it as "generally recognized as safe." Critics have pointed out that new products like synbio vanillin are slipping through a regulatory loophole that allows them to earn this GRAS designation without a government safety assessment of the process.

There are several other companies making synbio flavorings and supplements, says Kuiken. But few are as transparent as Evolva, he says. "Evolva is being completely open and up front about their process."

After years of experiments, Goldsmith says his company has figured out how to give yeast directions — in the form of genes for enzymes — to turn sugar into stevia, vanillin, saffron and resveratrol.

Yeast is a natural at transforming sugar into substances we love — that's what it does with alcohol, of course. And as synthetic biologists are learning, with the right genetic instructions, yeast can ferment sugar into lots of other things, too.

So will these new synbio foods measure up to the original versions, or be accepted at all by a public that's increasingly skeptical of GMOs? Hard to tell right now — and it's also virtually impossible for consumers to track synbio foods, even if they wanted to.

As Kuiken notes, "The people making these materials aren't the ones putting them into the final products, and sometimes the companies buying the flavorings and supplements didn't know they were made with synbio."

But besides potential advantages of flavor and price, some companies are betting that synbio foods could be far better for the planet, and thus marketable to conscientious consumers, if they get off the ground. As Luc Henry of the Swiss Federal Institute of Technology wrote in a blog post for Discovery, "Not only does [engineered yeast] not require any land, but also the final products, such as Evolva's vanillin, are chemically identical to the one isolated from natural sources and do not need to be labeled as 'GM.' "

Indeed, eco-minded engineers have been inspired by the environmental potential of synbio food. As Motley Fool recently reported, new dairy products are in the works that would require no cows at all. The start-up Muufri is using fermentation to engineer yeast to make cow, goat and buffalo milk, and a group of biohackers is pursuing synbio vegan cheese.

But even though most consumers still haven't heard of synbio foods, one advocacy group is scrutinizing them and rejecting claims that they are "natural." In August, Friends of the Earth noted in a press release, "Like 'traditional' GMOs, synthetic biology ingredients are entering food and consumer products in absence of adequate health and environmental safety assessment, regulations or labeling."

The environmental group also announced that it had persuaded Häagen-Dazs and a few other small ice cream companies not to use vanilla produced via synthetic biology. (Häagen-Dazs' move was a bit like a mayonnaise company slapping a gluten-free label on the jar, since Häagen-Dazs only uses real vanilla extract in its ice creams. The company seems unlikely to ever buy synbio vanilla, a substitute for artificial vanilla.)

Dana Perls, a food and technology campaigner with Friends of the Earth, says she has a lot of questions about the potential environmental impact of synbio foods. In particular, she wants to know how much sugar will be required to feed the yeast to make all these products.

"If you scale this up, it could hugely exacerbate the environmental impacts of sugarcane plantations, which are already responsible for huge amounts of destruction in biodiversity hot spots," Perls says. "I think Evolva's claims of sustainability are questionable at best."

Perls says it's also misleading for Evolva to call its vanillin "natural." "Consumers don't know the difference between natural and synthetic," she says.

Kuiken of the Synthetic Biology Project says that while technically, companies like Evolva are allowed by law to call their products "natural," the debate is an important one to have.

Ultimately, he says, the success of synbio foods will depend in part on whether the regulatory system can handle this type of technology, and what consumers have to say about it.

"The vanillin is going to be an interesting case to watch to see how people accept it or not," says Kuiken. "And I wonder: Do people even know that the artificial vanilla they're buying now" is derived from petrochemicals?

An earlier version of this story stated that the Food and Drug Administration does not regulate supplements or flavorings. In fact, the FDA can take action against flavoring and supplement manufacturers if their products are misbranded or adulterated, but the agency does not approve products before they go to market.