Accessibility links
The Birth And Afterlife Of Israel's Precious Etrog Fruit : The Salt An odd, beautiful and persnickety citrus fruit has its big moment during the Jewish fall festival of Sukkot. But then what do you do with it?

The Birth And Afterlife Of Israel's Precious Etrog Fruit

The Birth And Afterlife Of Israel's Precious Etrog Fruit 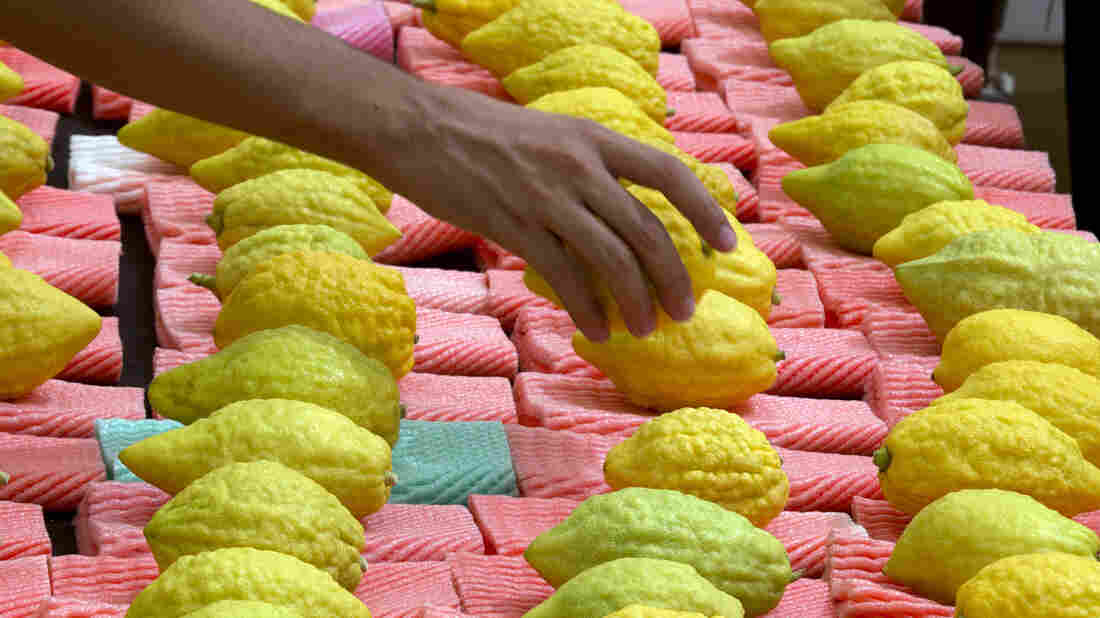 A man picks up an etrog, one of four plant species used during the celebration of Sukkot, in the ultra-Orthodox city of Bnei Brak in central Israel in September, 2012. Jack Guez /AFP/Getty Images hide caption 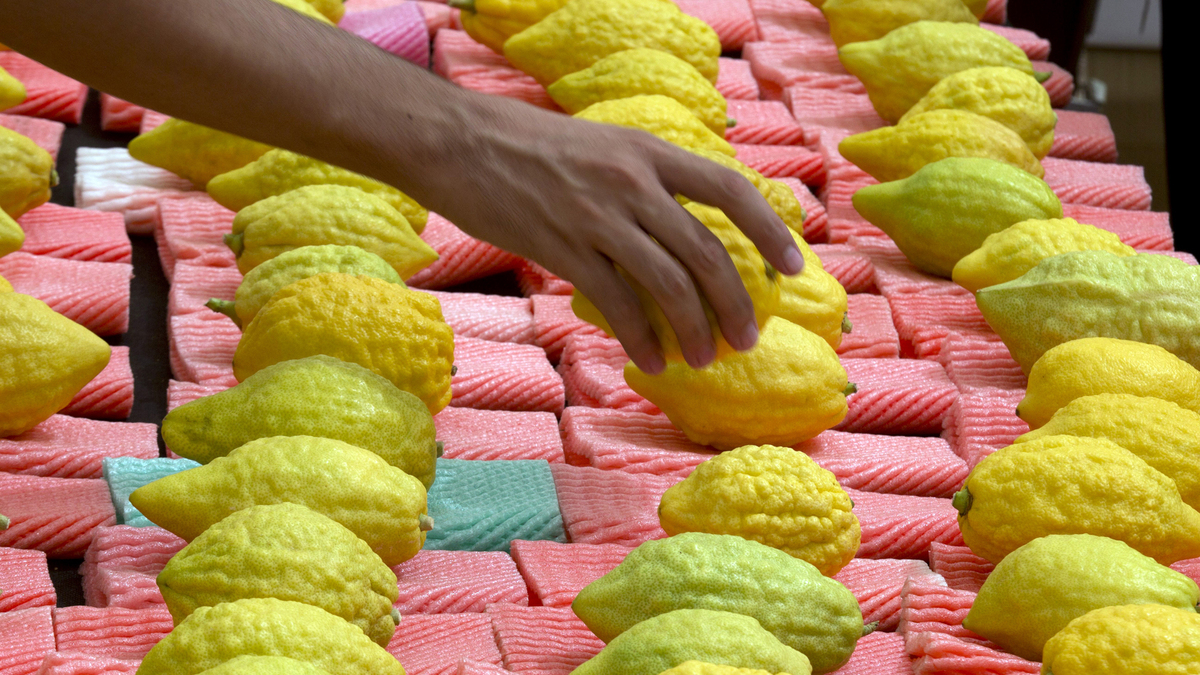 A man picks up an etrog, one of four plant species used during the celebration of Sukkot, in the ultra-Orthodox city of Bnei Brak in central Israel in September, 2012.

From boxes stacked nearby, he takes one bumpy green citrus at a time out of padded wrapping, holds it in both hands, brings it close to his nose and peers over his glasses for a good look. He rotates each etrog slowly, checking if it's suitable to serve as a "beautiful fruit" — as the Bible calls for — in ceremonies during the Jewish holiday known as Sukkot. Sukkot, which commences sundown on Oct. 8, marks the harvest and the Biblical tale of Jewish people wandering the desert for 40 years.

"I'm looking to see if it's symmetrical, not leaning," he says. "I'm checking that the top third is free of blemishes. As for the color, I'll put it with an apple and it should turn yellow in two days." 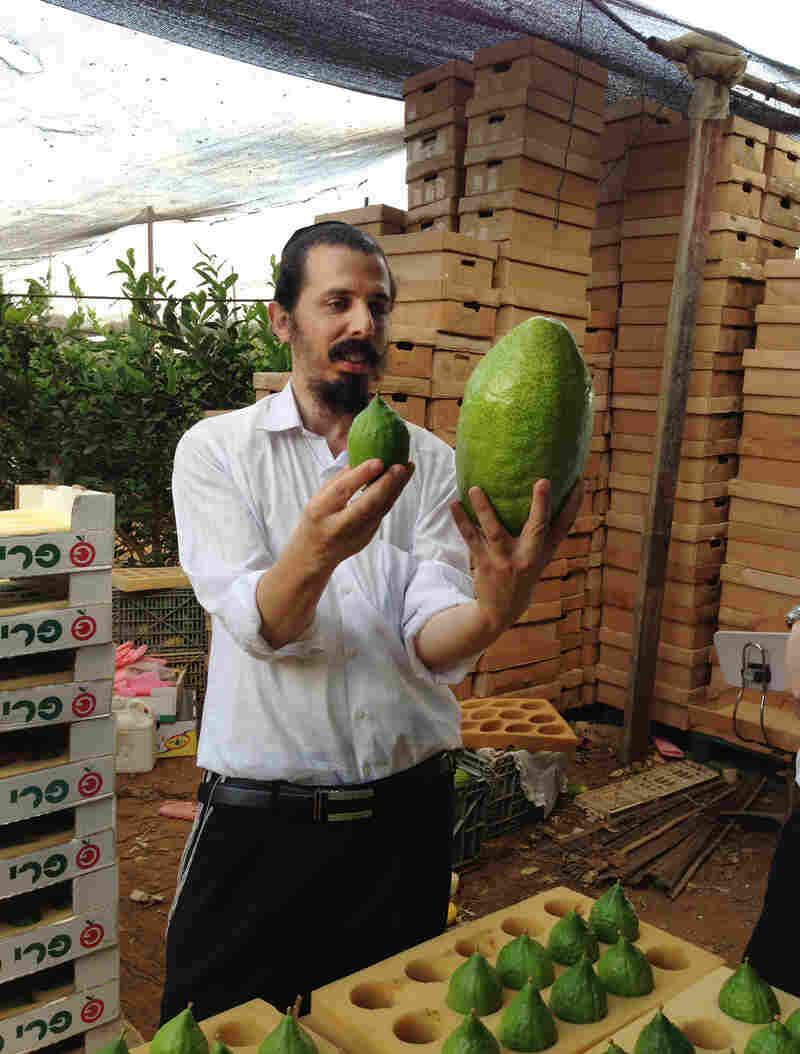 A wholesaler picking out fruit in an Israeli etrog orchard weighs a large Yemen-style etrog against a smaller variety. He prefers the small ones, and will search through stacks of boxes to find those he considers most beautiful. Emily Harris/NPR hide caption 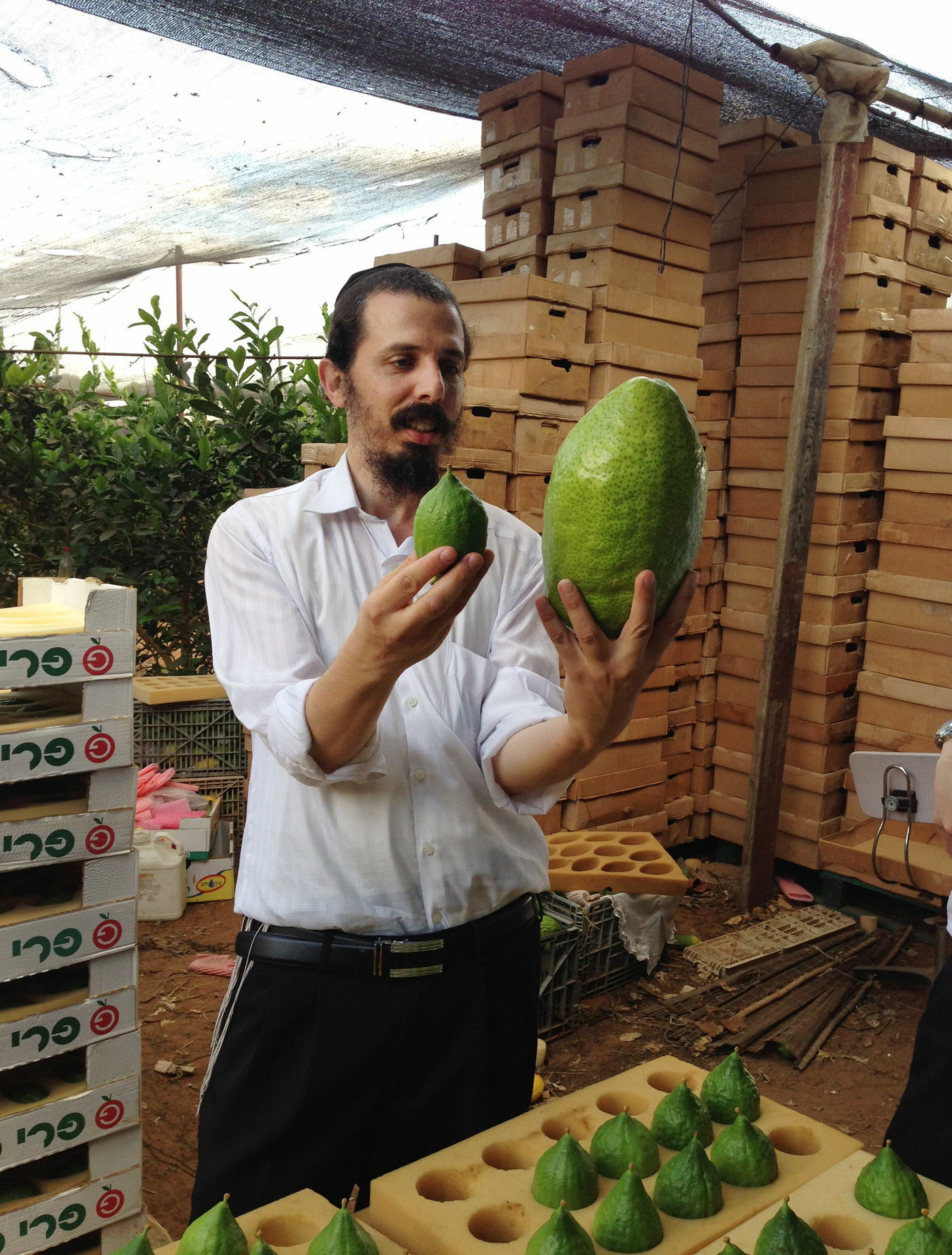 A wholesaler picking out fruit in an Israeli etrog orchard weighs a large Yemen-style etrog against a smaller variety. He prefers the small ones, and will search through stacks of boxes to find those he considers most beautiful.

Kalimi's eight-year-old son, Shoam, watches his dad and examines fruit, too. For those who value a perfect etrog, the secret of finding one is worth passing on through generations.

Called "citron" in English and etrog in Hebrew, this fruit is believed to be the first citrus to arrive on the shores of the Mediterranean Sea. Archeological evidence — pollen imprints in the walls of a Persian palace in what's now Jerusalem — points to etrogs appearing in the area as early as the 7th century B.C., says Eleizer E. Goldschmidt, a professor of agriculture and etrog specialist at Hebrew University.

He says etrogs have been used in Sukkot religious rituals since at least the second century B.C. It's one of four species, representing different aspects of agriculture, that observant Jews wave and pray over during the holiday ceremonies.

Etrog isn't specifically named in the Hebrew bible, but it has played the role of "beautiful fruit" for millennia because it has been considered so special for so long, Goldschmidt says.

"You have no idea how exotic citrus fruits were" when they first arrived around the Mediterranean, he says.

Since perhaps that long ago, rabbis have debated both the proper look of an etrog and its symbolism. Some suggest it represents the heart, says Rabbi David Rosen, the international director of interreligious affairs for the AJC (formerly the American Jewish Committee). The three other plants used in Sukkot ceremonies — palm, willow and myrtle — represent other parts of the body, he says.

"So when we take the four species together, it's a symbol of the whole body and all its components being devoted and dedication to God," he says.

Another popular view is that these plants, each with a different balance of taste and fragrance, represent the mix of good deeds and knowledge among people. The willow offers neither taste nor fragrance, Rosen notes, while myrtle smells good but has no taste. Palms produce delicious dates but no significant scent.

Etrog skin, when rubbed, is intoxicatingly fragrant, somewhat like a lemon. And although hardly a meal, the thick white pith inside is edible and mildly sweet. One etrog variety has very small juice sacs in the center, although the giant Yemenite etrog has no juice inside at all.

Etrog are tricky to grow, especially with the unblemished skin desirable for Sukkot ceremonies. In Israel's muggy lowlands, 77-year-old Arieh Antman has been growing etrogs for decades. It's a hassle, he says: Trees bear fruit for less than a decade, the crop must be sprayed with pesticides twice daily, and the leaves — which have sharp, serrated edges — must be tied back so they won't brush and blemish the skin.

Antman sticks with it, in part, because he finds the whole cycle beautiful. One tree can have blossoms, green leaves and fruit all at the same time.

"I've fallen in love with this crop," he says. "Otherwise I'd quit farming it." 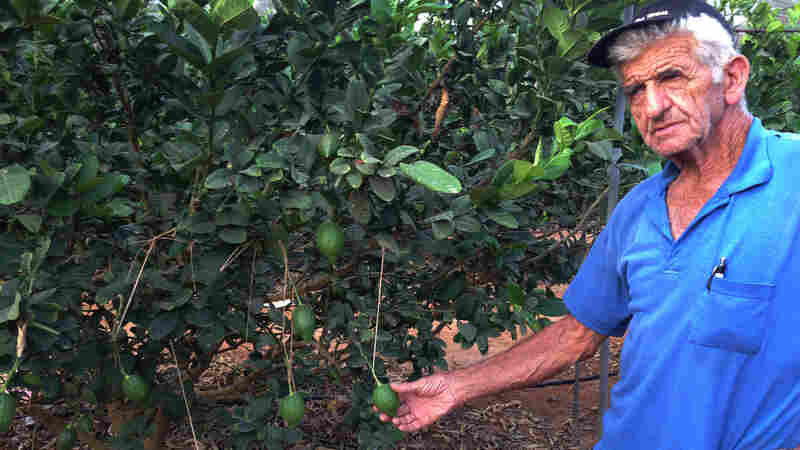 Israeli farmer Arieh Antman has been growing the labor-intensive etrog for decades. Leaves must be tied away from the fruit so their serrated edges won't mar the etrog skin. Emily Harris/NPR hide caption 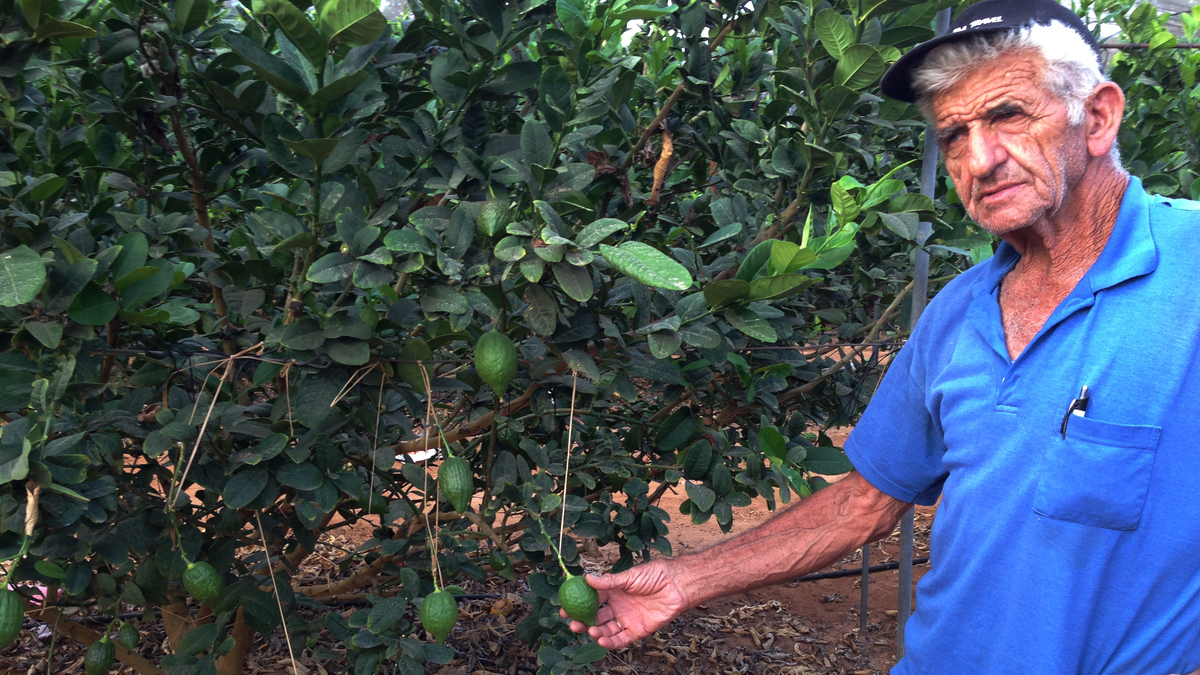 Israeli farmer Arieh Antman has been growing the labor-intensive etrog for decades. Leaves must be tied away from the fruit so their serrated edges won't mar the etrog skin.

Some people prize an etrog with a girdel, an indentation around the middle that makes the fruit resemble images of a woman's figure. Others will only consider an etrog with the pitam, a small, stem-like extrusion on the end of the fruit that does not attach to the tree.

No matter the specs, every etrog is most valuable right before Sukkot. A "perfect" etrog sells for hundreds of dollars.

Israel grows about a million etrogs each year, according to the Ministry of Agriculture. A third are exported, most to the U.S. Israel imports etrogs, too, particularly from Morocco and Italy.

Of course, Jews weren't the only people to prize the fruit – ancient Greeks and Romans loved the scent and ate the pith in salads. Candied citron is critical to many an English Christmas table, and citron preserves are important to pastry-making in Italy. But the big etrog party happens in Jewish homes in the fall.

The average retail price in Israel before Sukkot, according to government figures, is 40 Israeli shekels, or about $11, for one etrog. After Sukkot, they're worth almost nothing.

Rabbi Rosen says it breaks no religious rules just to toss the etrog out with other holiday leftovers. "It doesn't have any sanctity," he says. "It isn't something like a Torah scroll that has God's name written in it."

"Nevertheless, because it's used for a religious service," he adds, "One doesn't want to be disrespectful."

So there are some common alternatives to the garbage bin. Jam is popular; so is making etrog liqueur. Some people poke cloves in the etrog skin and use it in weekly Sabbath prayers as long as it stays fragrant.

The man with the most answers may be Uzi Eli, otherwise known as Etrog Man. At a small shop in Jerusalem's Mahane Yehuda market, the 72-year-old and his son Or sell fresh etrog juice, etrog skin cream, etrog spray, etrog mustard, etrog jam, and soap and candles made with — and in the shape of — an etrog.

He makes a rub to clear sinuses, made of menthol, ginger, cayenne, camphor and, of course, etrog. Another concoction is intended to fight morning sickness. Etrog has a traditional association as being helpful in pregnancies.

"If a pregnant woman eats a lot of etrog in the ninth month, the smell of her baby will be like etrog," says Uzi's son Or.

For their business, looks don't matter, so they can pick up etrog, especially after Sukkot, for about $2 a pound.