Accessibility links
The 'Sioux Chef' Is Putting Pre-Colonization Food Back On The Menu : The Salt Sean Sherman plans to open a restaurant serving food inspired by what was eaten in the Great Plains prior to the arrival of European settlers. Discovering those ingredients has been half the battle. 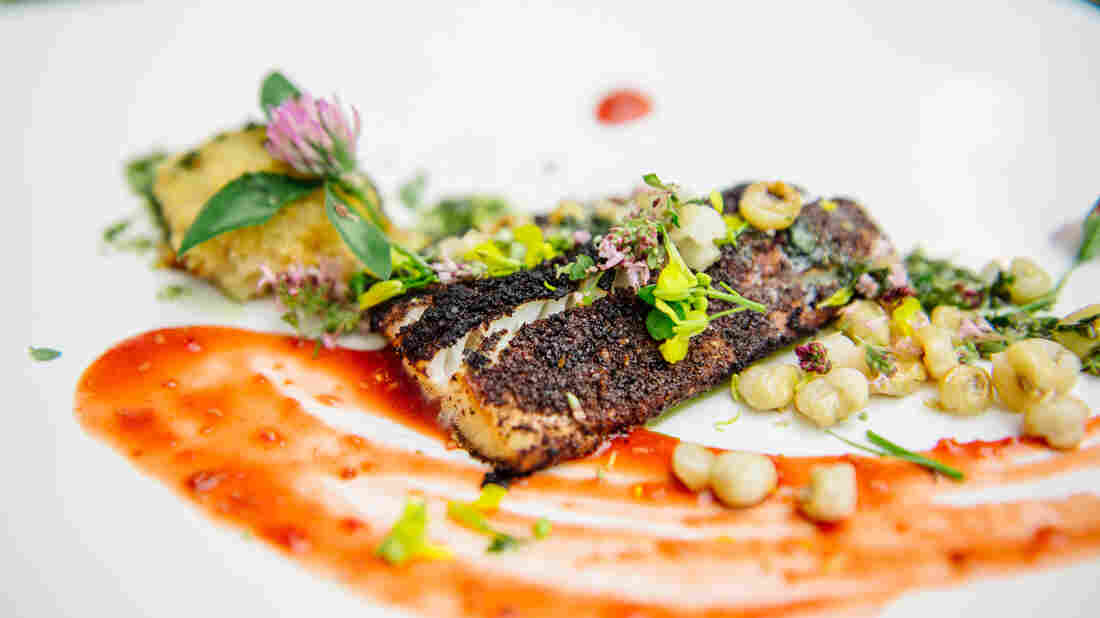 Sherman is still experimenting with the type of food he'll serve in the restaurant. Recently he made this walleye filet with sumac and maple sugar, a white bean and smoked walleye croquette and toasted hominy. Becca Dilley/Courtesy of Heavytable.com hide caption 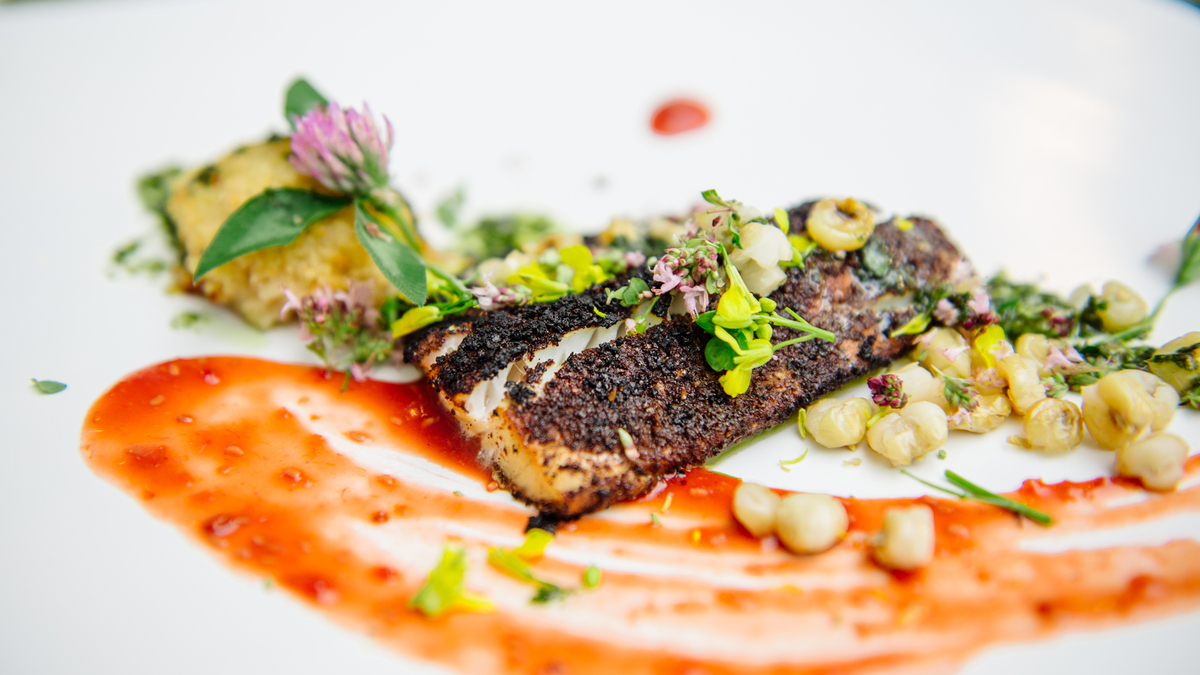 Sherman is still experimenting with the type of food he'll serve in the restaurant. Recently he made this walleye filet with sumac and maple sugar, a white bean and smoked walleye croquette and toasted hominy.

Like most chefs, Sean Sherman practically lives in the kitchen. But in his spare time, this member of the Oglala Lakota tribe has been on a quest to identify the foods his ancestors ate on the Great Plains before European settlers appeared on the scene. After years of researching and experimenting with "pre-colonization" foods, he's preparing to open a restaurant in the Twin Cities this winter that showcases those foods, reborn for contemporary palates.

Sherman, who calls himself the Sioux Chef, grew up on the Pine Ridge Indian Reservation in South Dakota. It's where he first started to learn about the traditional foods of the Plains, whether it was hunting animals like pronghorn antelope and grouse, or picking chokecherries for wojapi, a berry soup. 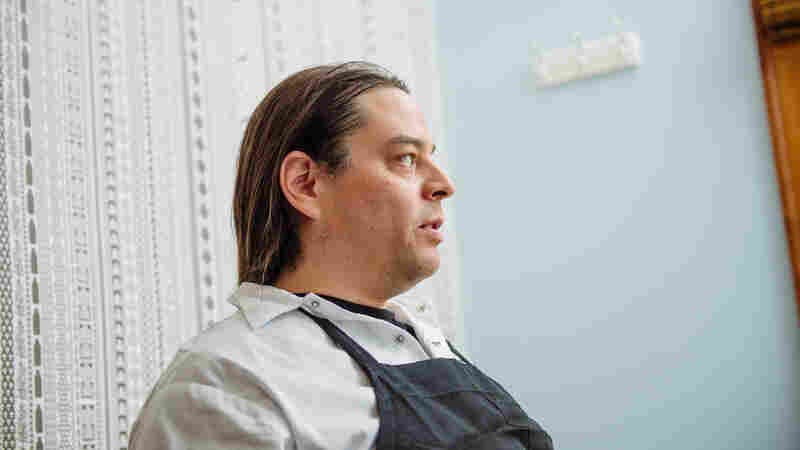 Sean Sherman, who calls himself the "Sioux Chef," grew up on the Pine Ridge Indian Reservation in South Dakota. Becca Dilley/Courtesy of Heavytable.com hide caption 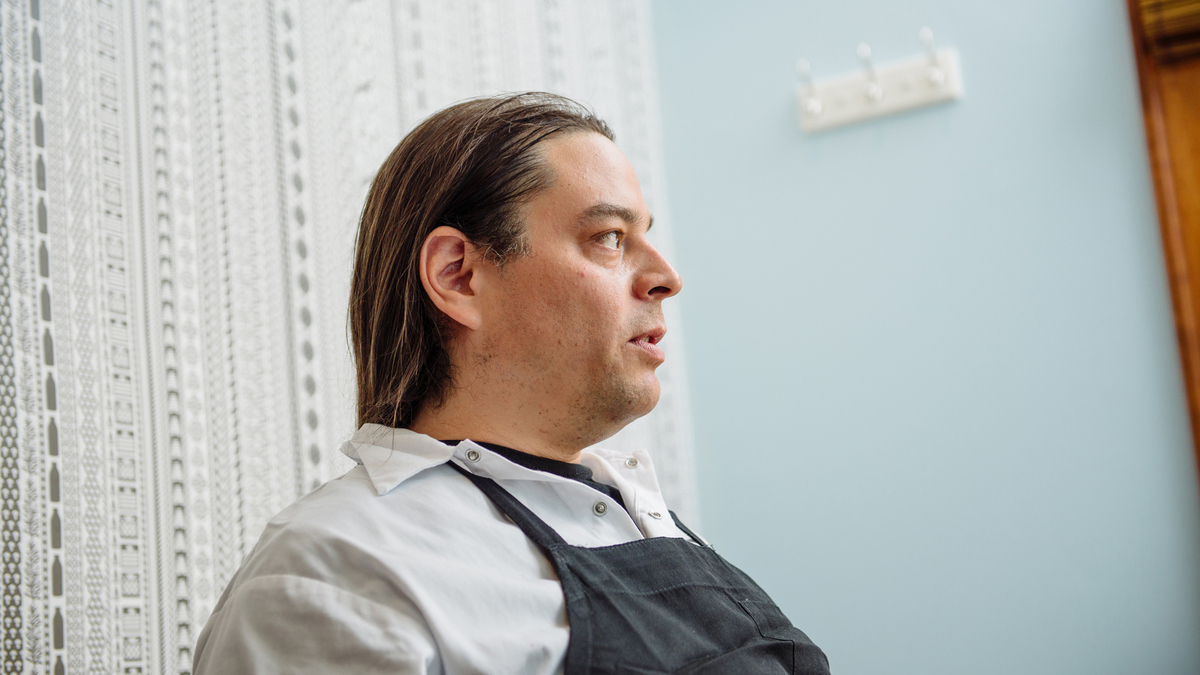 Sean Sherman, who calls himself the "Sioux Chef," grew up on the Pine Ridge Indian Reservation in South Dakota.

"We were close to the Badlands and its sand hills, which is not the best growing area by far," says Sherman, who's now 40. "But we would also spend weeks in the Black Hills, crawling around and learning stuff."

Sherman's grandfather was among the first Native American children to go to mission schools on the reservation, and he was one of Sherman's first teachers. Forced assimilation during the 19th and early 20th centuries wiped out much of Native American food culture across the country. When his grandfather died when Sherman was 18, he was left with many unanswered questions.

In the meantime, Sherman worked his way up in the restaurant world, eventually becoming an executive chef at Minneapolis' La Bodega in 2000. Around the same time, he had the idea to write a Lakota cookbook. Although there were some Native American cookbooks already on the market, he says he found that most of them focused on the Southwest or made too many generalizations about food across regions and tribes.

When he tried to learn more about the wild game — and especially the plants — native to the Great Plains, he came up short. He says many Americans don't have a sense of the Lakota diet beyond bison or frybread. (Frybread is actually a fairly recent addition and has a complicated history.)

"There wasn't a lot of information out there, so I devised my own [research] plan," he says. "I spent years studying wild edibles and ethnobotany."

One of his breakthroughs came when he lived in Mexico for a while. He discovered that the traditional methods of drying and grinding food in that region were similar to those his tribe had once used, and indigenous people all across North America were working with ingredients like corn, beans and squash. 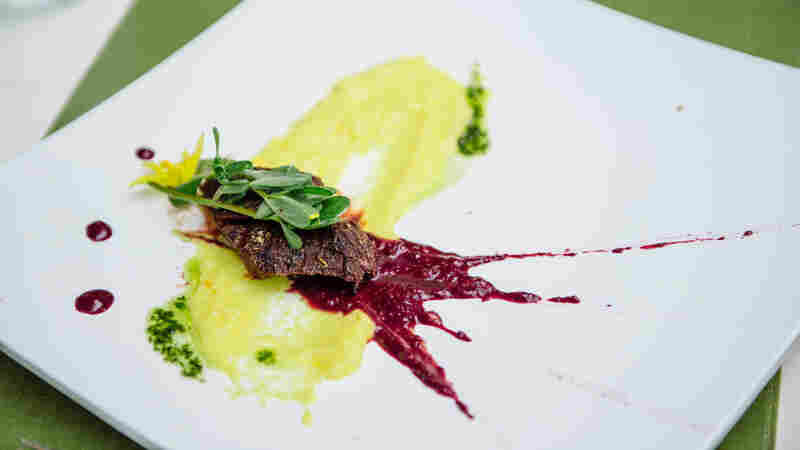 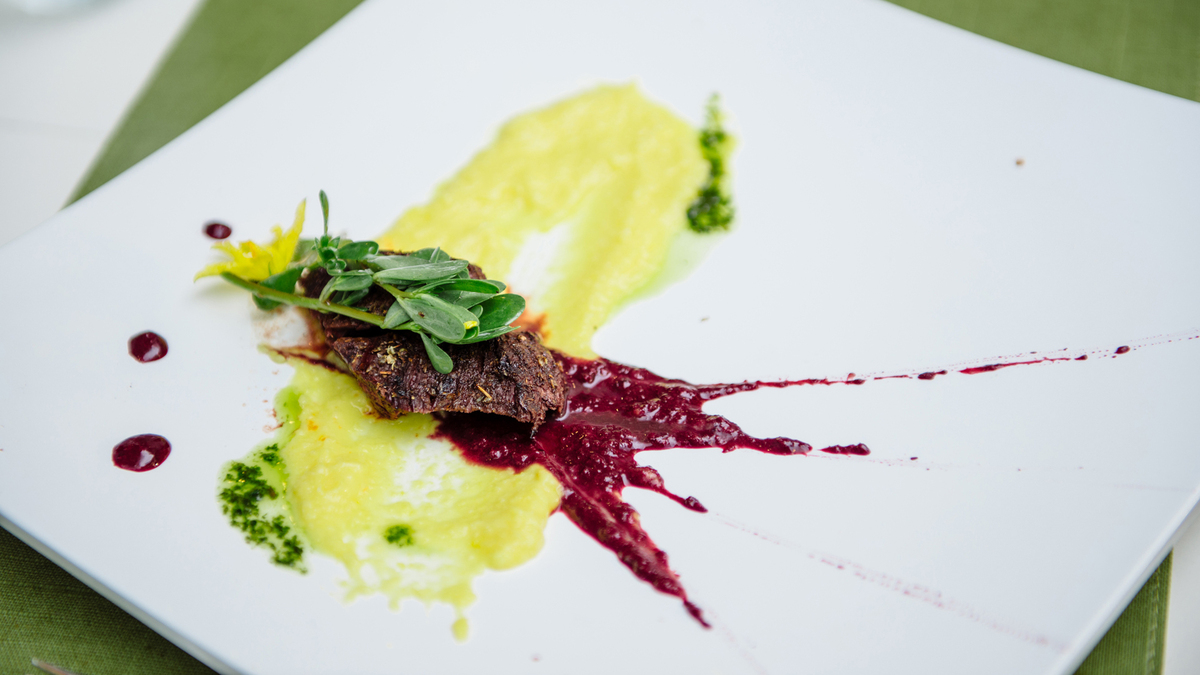 Another of Sherman's dishes — bison hanger steak with a corn and dandelion puree, chokecherries, purslane and squash blossoms.

Back in Minnesota, he continued to try to piece together a picture of the traditional diet of the local Dakota and Ojibwe tribes. He also spent a lot of time traveling across the state, adding more staples to his growing list, including bison, venison, rabbit, river and lake fish, trout, duck, quail, maple sugar, sage, sumac, plums, timpsula or wild turnip, wild rice, purslane, amaranth, maize and various wildflowers.

Identifying the ingredients has only been half of the challenge, however. He has also had to figure out how to preserve everything. He has relied mostly on a food dehydrator (for efficiency) but has also experimented with drying by sun and wood fire.

"I want to figure out how I can use wild flavors in season, because they might be gone in a two-week period," he says. "The biggest part of the Native American cuisine is just that method of preserving foods. That's what people were doing during the whole summer season — preparing for the next long winter."

Sherman started Sioux Chef as a catering business in Minneapolis and hopes to open his restaurant sometime this winter in the Twin Cities. He says the area's diverse population and vibrant food scene offer the "best platform to showcase what we can do with these foods."

Some chefs have tried similar concepts in other regions. Nephi Craig brings Apache and Navajo influences to the food he prepares at the Sunrise Park Resort Hotel in Arizona. The Mitsitam Cafe in the Smithsonian National Museum of the American Indian in Washington, D.C., has won national acclaim.

Native Americans Have Superfoods Right Under Their Feet

Sherman says his restaurant will feature a seasonal menu with family-style dishes, like wild rice flatbread, cedar-braised bison, smoked turkey wasna, seared walleye with sumac and maple sugar, and balsam-fir iced tea. Most of his ingredients will be sourced from local farms. Some farms, like Wozupi, work with local tribes to grow indigenous plants and preserve heirloom seeds.

Sherman says his goal is to bring a sophisticated touch to traditional ingredients, and he hopes it will be a way to share old traditions with new diners. "We need this kind of restaurant all over the place," he says.

But other groups on reservations are interested in reviving pre-colonization foods to reincorporate them into local diets. The Traditional Western Apache Diet Project and the Crow Creek Fresh Food Initiative are offshoots of a food sovereignty movement that is picking up steam on several reservations around the country. A recent study by the U.S. Department of Agriculture also found that several indigenous foods that aren't widely consumed anymore are highly nutritious.

If his restaurant is successful, Sherman hopes he can expand the concept and create similar ones across the country, training young Native American chefs in keeping their tribes' best culinary traditions alive.

Serri Graslie is a producer for NPR.org and All Things Considered.