Accessibility links
What's Really In A Big Mac? McDonald's Says It's Ready To Tell All : The Salt Pink slime? Eyeballs? Rumors about what goes into McD's food have dogged it for years. As U.S. sales falter, the firm's new ad campaign aims to tackle those concerns by inviting consumers' questions. 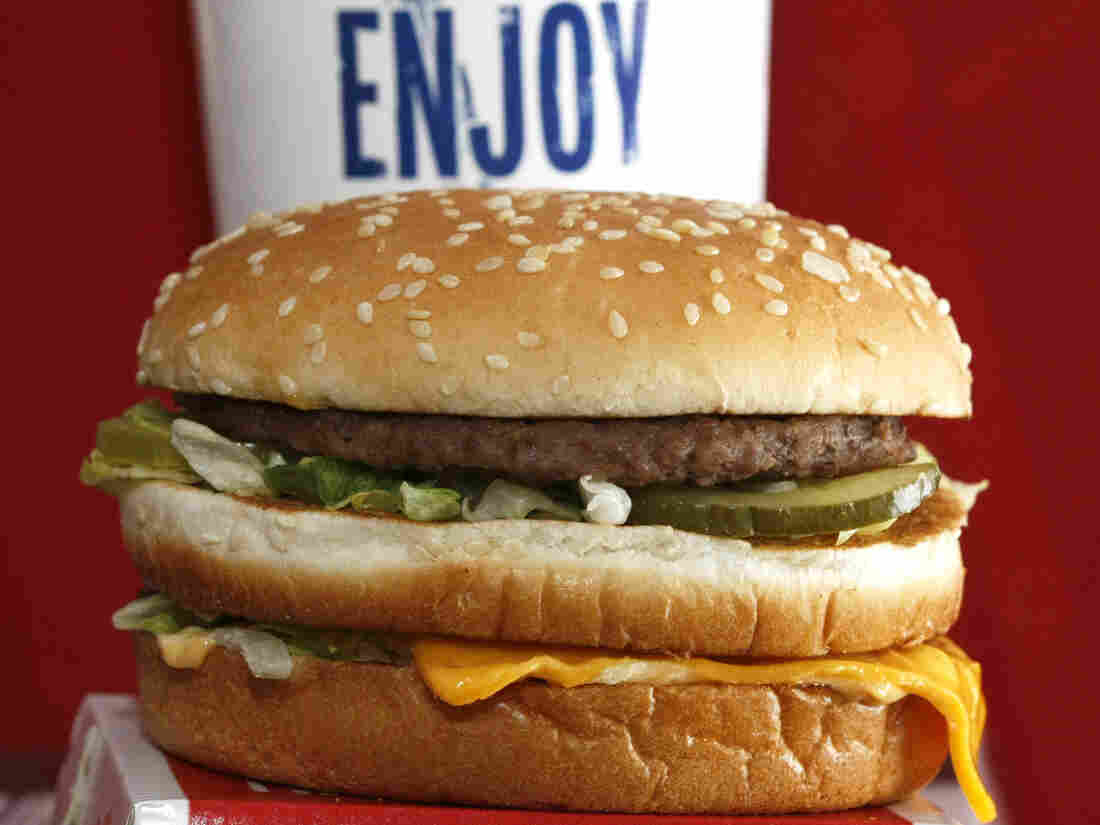 McDonald's still won't reveal the recipe for its secret sauce, but it will show you how that Big Mac patty gets made. Keith Srakocic/AP hide caption 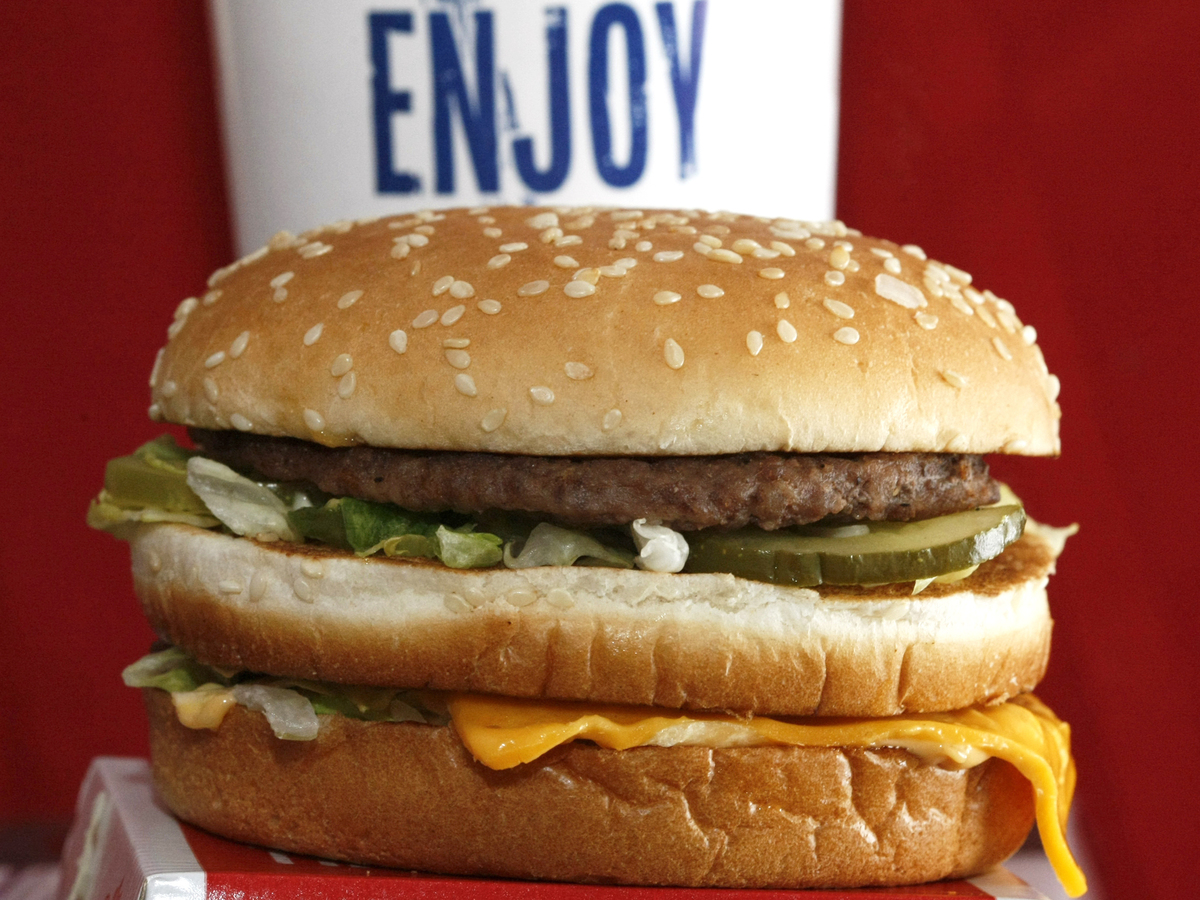 McDonald's still won't reveal the recipe for its secret sauce, but it will show you how that Big Mac patty gets made.

Did you hear the one about the McDonald's hamburger that still hadn't decomposed after 14 years?

And "pink slime" — how much goes into McDonald's beef?

Over the years, fast-food behemoth McDonald's has faced some pretty disturbing questions about the ingredients that go into its meals. And lately, its North American sales have been slumping. That may have something to do with the growing ranks of consumers asking pesky questions about what Big Food is feeding them.

So perhaps it's not so surprising that this week, McDonald's USA decided to tell the public, all right, we're throwing open the doors. On Monday, the company launched "Your Questions, Our Food," a new advertising blitz aimed at dispelling the rumors and convincing consumers it has nothing to hide.

This new tell-all, social media-based approach — "in many ways, it's the way the world is going," Ben Stringfellow, vice president of communications for McDonald's USA, told the Associated Press.

As part of that effort, the company is inviting questions via Facebook and Twitter. And it has enlisted the help of Grant Imahara, former co-host of the Discovery Channel's Mythbusters, to help address some of the most persistent concerns. In a video posted on the company's website, Imahara tours a factory in Fresno, Calif., run by Cargill, which supplies the beef used in McD's burgers.

During the tour, we learn that no, there are no eyeballs or lips in the meat and no, there's no ammonia or lean, finely textured beef (the so-called pink slime), either.

"Beef in and beef out — nothing else is added," one Cargill worker tells Imahara.

What the video fails to mention is that yes, McDonald's burgers at one point did contain lean, finely textured beef, though the company phased it out in 2011. The company does acknowledge this in a longer Q&A on its website, which addresses other unsavory issues, like the fact that most of its beef comes from cattle treated with hormones.

The new campaign follows similar efforts to pull back the curtain at McDonald's Australian and Canadian divisions, which released a highly publicized video that let us witness the birth of a chicken McNugget earlier this year. (Perhaps the most illuminating bit of information from that video was that the iconic chicken lumps are made in four shapes — the bell, ball, bow tie and boot.)

The shift in tone also comes as McDonald's sales falter at its U.S. stores. Same-store sales slipped 1.5 percent during the most recent fiscal quarter, and the company is having a tough time appealing to millennials. Since 2011, the number of 19- to 21-year-olds who visited a McDonald's each month has dropped by 12.9 percentage points, as the demographic flocks to fast-casual chains like Chipotle and Five Guys, according to data the restaurant consulting group Technomic gathered for The Wall Street Journal.

While consumers may welcome McDonald's move toward more transparency, some critics say what's really needed is a change in its core menu.

"Most people simply don't think of McDonald's as a healthy place to eat, despite its efforts to offer more menu choices," Civil Eats co-founder Naomi Starkman writes. In a world where farm-to-table increasingly dominates eating ethos, McDonald's is still essentially serving up "factory farm-to-table," she says.

"The truth is," she writes, "McDonald's is facing a marketplace where people no longer want fast food, but good food served fast."

Adds Sriram Madhusoodanan of Corporate Accountability International, an advocacy group that has called on McDonald's to stop marketing to kids, "Instead of addressing people's concerns with the corporation's marketing practices and food quality, McDonald's continues to double-down on advertising that simply won't make its problems go away."

Speaking of things that won't go away, remember that burger-that-never ages we mentioned? Yeah, it's scientifically possible, McDonald's has previously acknowledged, if you stored the thing in superdry conditions where bacteria and mold can't form.