Accessibility links
More Cities Are Making It Illegal To Hand Out Food To The Homeless : The Salt Lots of groups and individuals try to help the homeless in their communities by offering them food. But a report finds that cities are increasingly passing measures to restrict these efforts. 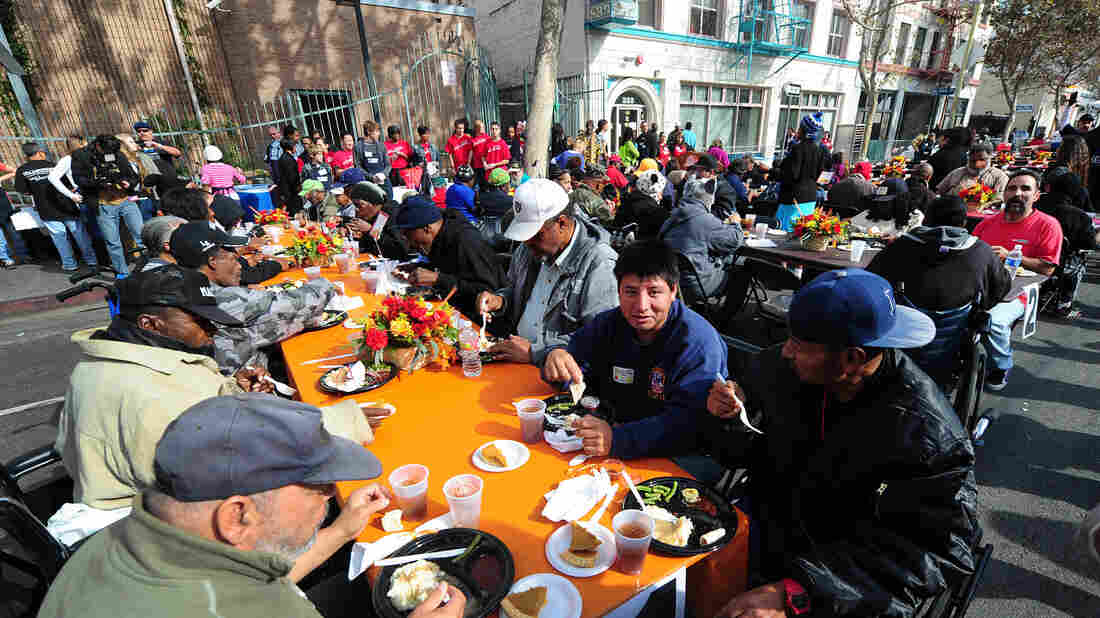 The homeless and others in need enjoy lunch at the Los Angeles Mission on Nov. 23, 2011, in celebration of Thanksgiving. Legislation to ban organizations from serving food to homeless people in public places has been proposed in Los Angeles. Frederic J. Brown/AFP/Getty Images hide caption 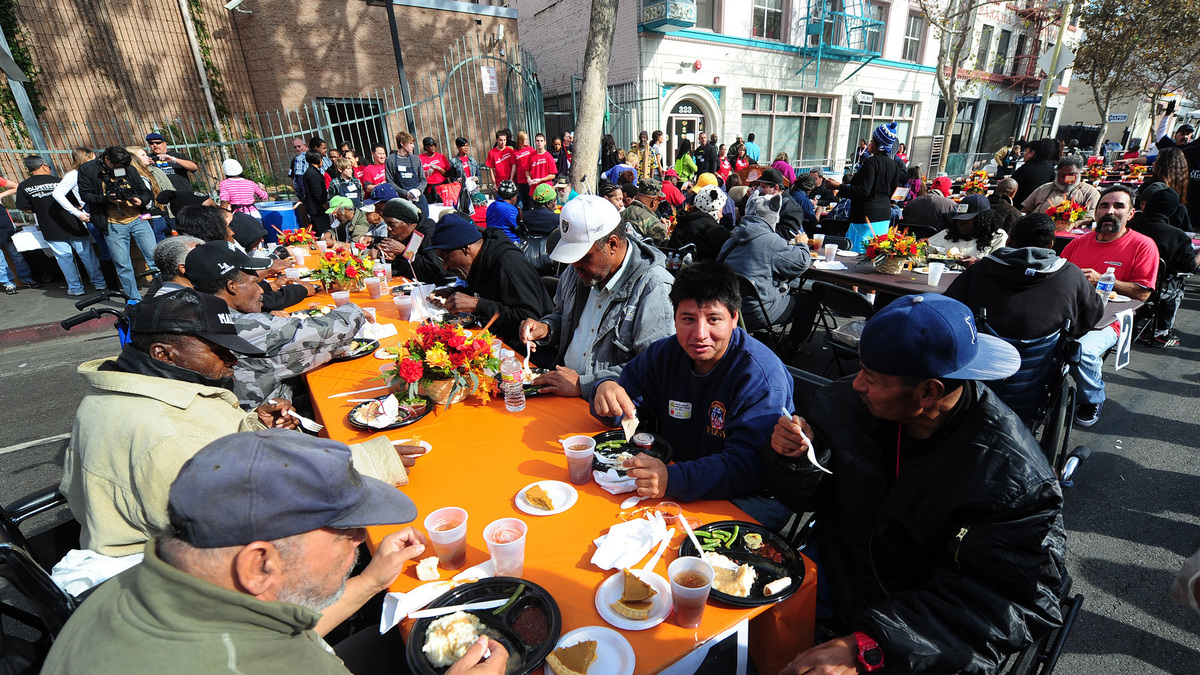 The homeless and others in need enjoy lunch at the Los Angeles Mission on Nov. 23, 2011, in celebration of Thanksgiving. Legislation to ban organizations from serving food to homeless people in public places has been proposed in Los Angeles.

If you don't have a place to live, getting enough to eat clearly may be a struggle. And since homelessness in the U.S. isn't going away and is even rising in some cities, more charitable groups and individuals have been stepping up the past few years to share food with these vulnerable folks in their communities.

But just as more people reach out to help, cities are biting back at those hands feeding the homeless. 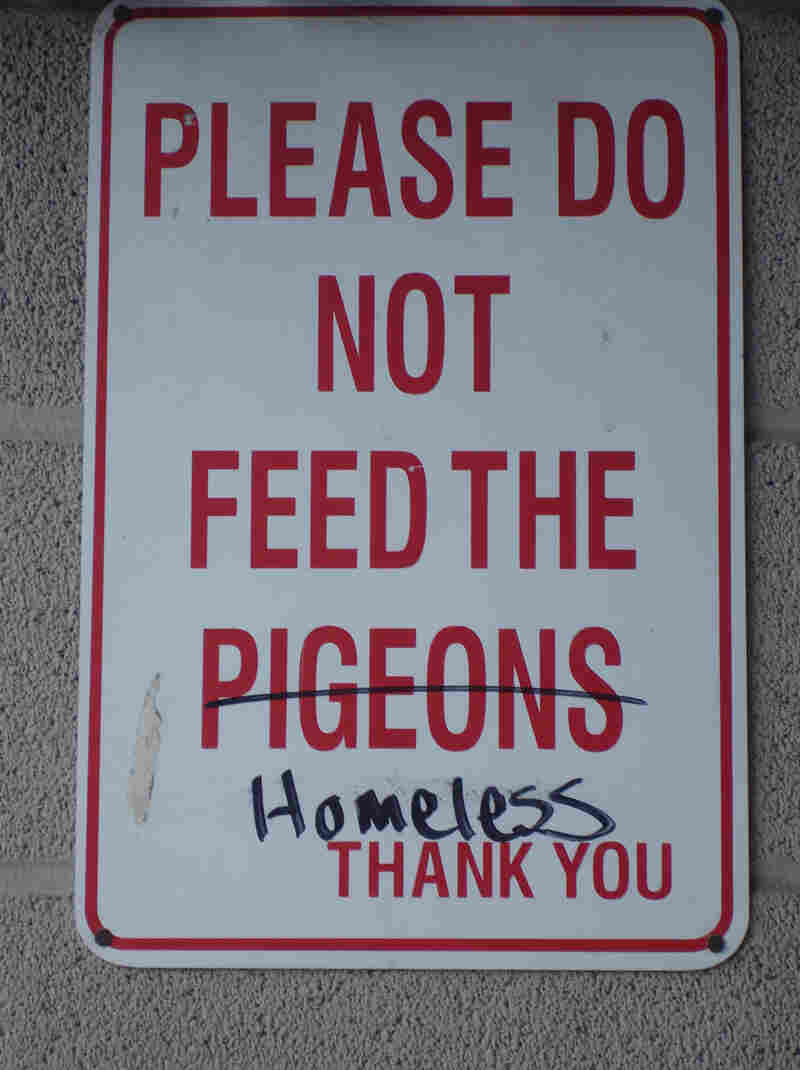 toggle caption
Courtesy of National Coalition for the Homeless 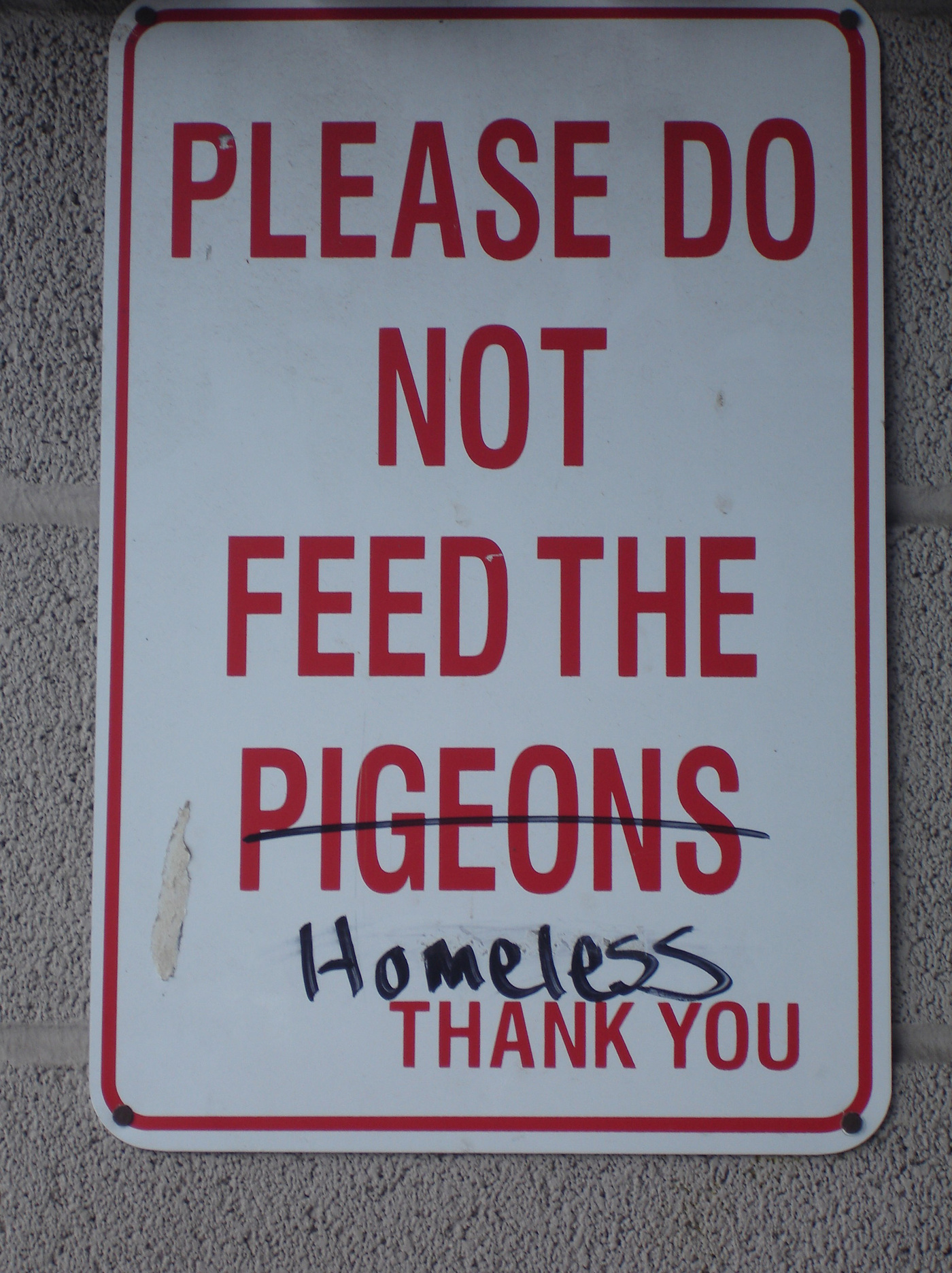 According to Michael Stoops, a supporter named Tem Feavel submitted this image to the National Coalition for the Homeless in 2007, but there is no record of where it was taken.

Courtesy of National Coalition for the Homeless

According to a report released Monday by the National Coalition for the Homeless, 21 cities have passed measures aimed at restricting the people who feed the homeless since January 2013. In that same time, similar legislation was introduced in more than 10 cities. Combined, these measures represent a 47 percent increase in the number of cities that have passed or introduced legislation to restrict food sharing since the coalition last counted in 2010.

The latest city to crack down is Fort Lauderdale, Fla. According to the Sun Sentinel, the city's commissioners passed a measure early Wednesday that will require feeding sites to be more than 500 feet away from each other, with only one allowed per city block. They'll also have to be at least 500 feet from residential properties.

Michael Stoops, director of community organizing for the coalition and the editor of the report, says that as cities have felt more pressure to prioritize economic development and tourism, they've decided that food sharing programs — especially those that happen in public spaces and draw dozens, if not hundreds of people — are problematic.

"We consider measures like the one in Fort Lauderdale to be criminalizing being homeless or helping the homeless," says Stoops.

Cities like Fort Lauderdale aren't throwing people in jail for feeding the homeless or being homeless. But often, they're creating more ways to impose fines.

And yet, Stoops argues that the measures will ultimately be ineffective in addressing the real problem: homelessness itself.

"Cities' hope is that restricting sharing of food will somehow make [the] homeless disappear and go away," Stoops tells The Salt. "But I can promise you that even if these ordinances are adopted, it's not going to get rid of homelessness."

Millions Struggle To Get Enough To Eat Despite Jobs Returning

The measures that restrict food distribution tend to take one of two forms: new rules on the use of public property and new food-safety regulations. Salt Lake City, for example, now requires that anyone preparing and serving food to the homeless get a food handler's permit.

In some cities, like Charlotte, N.C., it's not the local government that pressures the food groups to relocate or limit their programs — it's community groups practicing "not in my backyard" politics, or NIMBYism, according to the coalition's report. (The coalition notes that its report focuses on cities it has been able to track, but that many more cities may have anti-homeless-feeding legislation that the coalition may not be aware of.)

Robert Marbut, a consultant based in San Antonio, helps cities and counties deal with the problem of homelessness. He says he falls somewhere in the middle in this debate. While he's opposed to criminalization, he thinks "street feeding" programs that distribute food in parks and under bridges can do more harm than good.

"Street feeding is one of the worst things to do, because it keeps people in homeless status," he says. "I think it's very unproductive, very enabling, and it keeps people out of recovery programs."

Instead, he thinks food sharing programs should only be located near what he calls the "core areas of recovery": mental health, substance abuse and job readiness services. Otherwise, he says, homeless people may spend more time pursuing food than the services that will help them get back on their feet.

Stoops says that he agrees there should be options for the homeless to eat meals indoors — with heat and air conditioning at shelters, churches and other sites. But he points out that those programs can't meet the full scope of needs.

"Not everyone wants to go to a shelter or a meal program. In the best of all worlds, the homeless agencies get out of the office and go with ministry programs to bring services to where people are," he says.