Accessibility links
Why California's Drought-Stressed Fruit May Be Better For You : The Salt Is California's severe drought hurting the nutrient content of fruit? No, preliminary data on pomegranates suggest. The fruit may be smaller, but packed with more antioxidants, tests show. 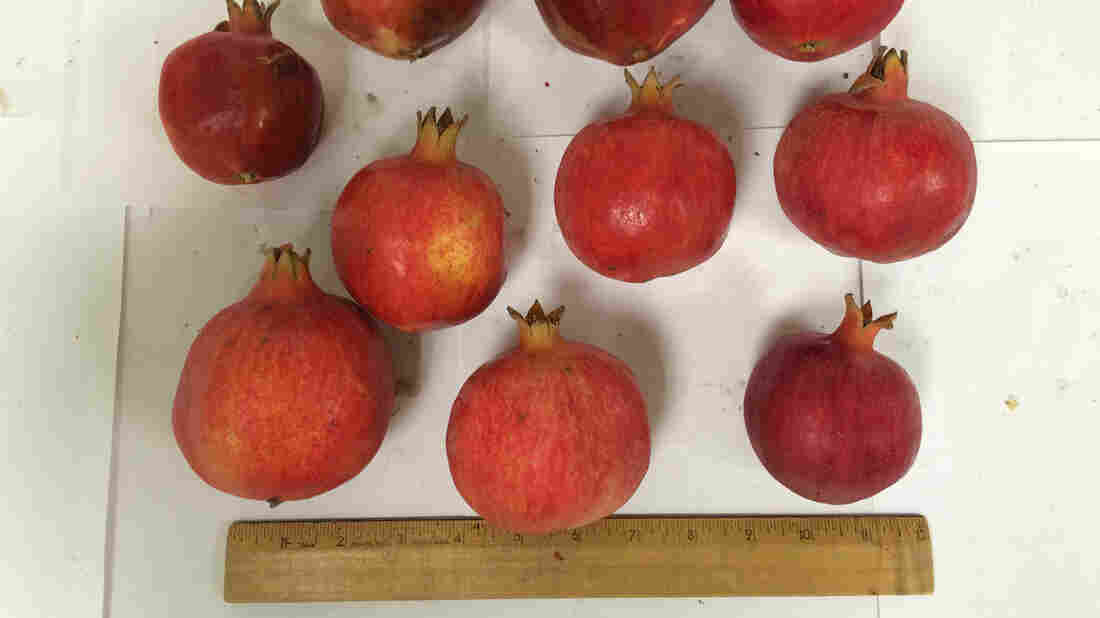 These pomegranates are about an inch smaller than the typical size, but they're packed with antioxidants. Courtesy of Tiziana Centofanti hide caption 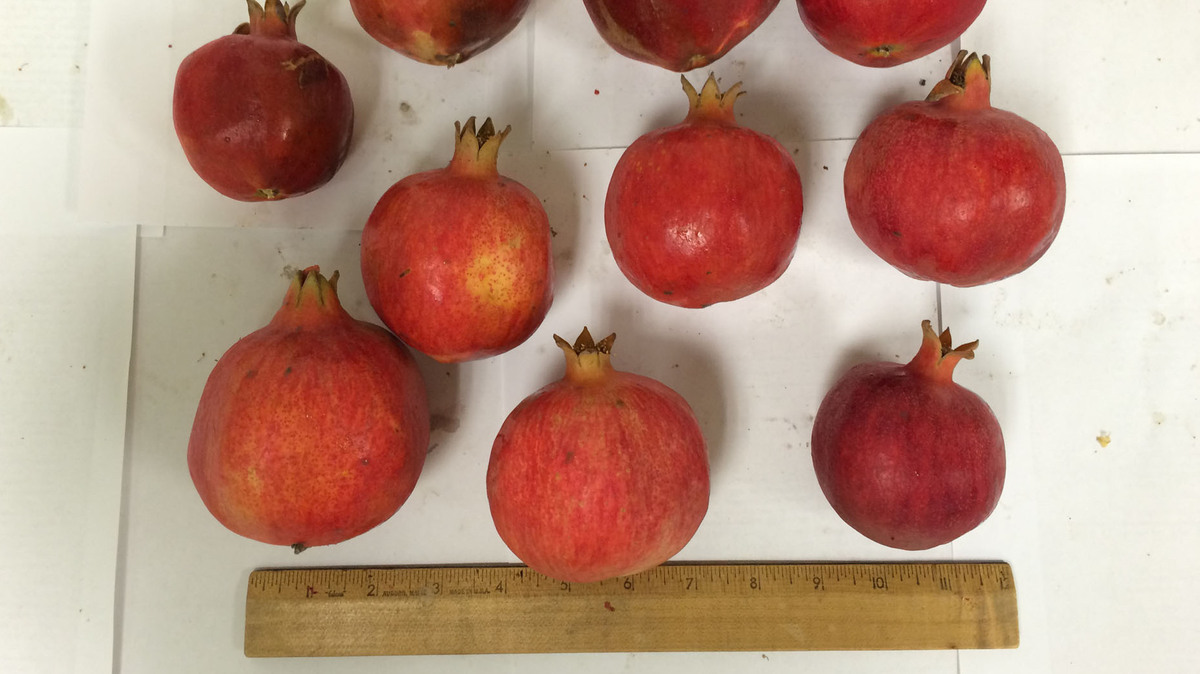 These pomegranates are about an inch smaller than the typical size, but they're packed with antioxidants.

California's severe drought is putting stress on everyone these days: the residents whose wells are running dry; the farmers forced to experiment with growing their produce with much less water; and of course, the thirsty fruits and vegetables themselves.

But preliminary research suggests the dryness isn't hurting the produce's nutritional value, and with a few added minerals may even boost it.

That's the tantalizing concept Tiziana Centofanti has been studying at the U.S. Department of Agriculture lab in Parlier, Calif., a sprawling campus of experimental farmland about half an hour south of Fresno.

Centofanti is a research scientist affiliated with the Center for Irrigation Technology at Fresno State. One of the questions she's asking is how fruit trees react to drought, compared to fruit from trees that get plenty of water.

"My research is about physiological response to stresses," Centofanti says, "and drought is one of those." 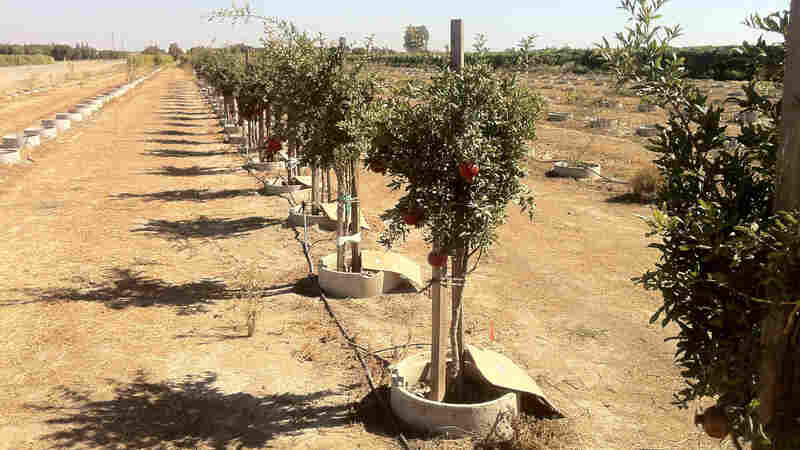 The tile ring prevents the roots of these trees from spreading out, forcing them to grow further down. Courtesy of Tiziana Centofanti hide caption 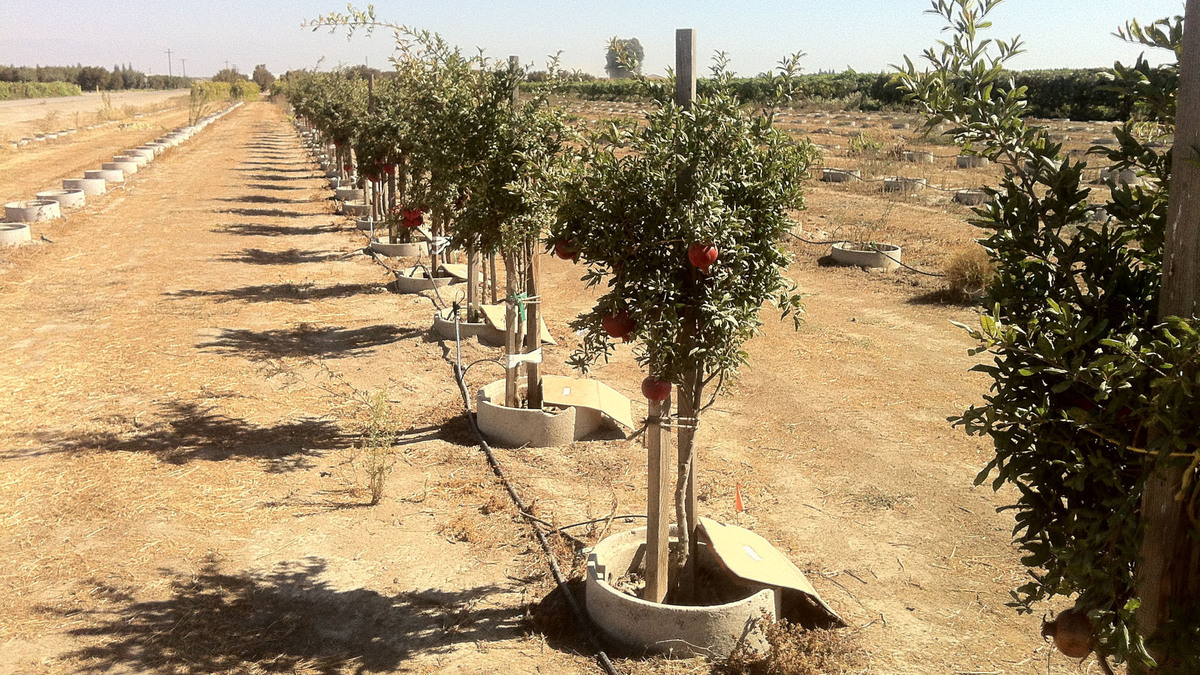 The tile ring prevents the roots of these trees from spreading out, forcing them to grow further down.

Some of the pomegranate trees in the orchards at Parlier are pretty stressed out. They're planted inside a tile ring that constrains their root systems, forcing them to burrow deep into the ground. Centofanti waters them with a solution of salt, boron and selenium; these are natural elements in the soil on many Central Valley farms that are also struggling with drought.

"You will definitely see that these trees are much, much smaller," she says. They're actually dwarfish, and the fruit on them is tiny, too.

Centofanti shows me another plot of pomegranates she's watering with just 35 percent of what a tree normally would drink, and yet another group of trees that are getting half the normal amount of water. These trees all are growing to the usual height but their fruit is cracked, so you can see the pomegranate seeds peeking out like tiny rubies.

Research shows that pomegranates have specific compounds that may reduce swelling and infection, even possibly fight DNA damage and cardiovascular disease. So to see how drought might change that fruit chemistry, Centofanti takes the water-stressed pomegranates into the lab, cuts them and uses a French press to squeeze everything, including the peel, into juice. She shakes that onto a magnetic stirrer, and analyzes it with liquid chromatography.

Preliminary data, she says, confirm her suspicions about drought's effect on the fruit's nutritional value.

"Does not affect the fruit quality, so nothing, no differences at all," Centofanti says, gesturing toward a deep freezer full of fruit samples.

Indeed, so far the results from this study show that the cracked pomegranates grown with much less water still have all the normal antioxidant levels — the same amounts of vitamin C, micronutrients and macronutrients. Same results with the drought-stressed grapes that Centofanti has tested.

But there is one interesting difference about the dwarf pomegranate trees, the ones with constrained roots: The tiny pomegranates grown with the salt, boron and selenium seem to have double the antioxidant content of pomegranates grown under normal conditions. Centofanti and her team still are investigating why the salt and boron produce these results, but they have some ideas.

"Plants, when they are stressed, they tend to produce higher content of phenolics, antioxidants," Centofanti says. And because salt and boron are toxic for plants, she says, this increased stress appears to be prompting the trees to come out fighting, releasing more protective chemical compounds.

Centofanti and her colleagues plan to submit their findings on grapes and pomegranates for publication early next year, and she is looking into whether there's a similar effect on peaches. Those trials are still in the early stages, and so far, like the pomegranates, the peaches she has grown with less water are tiny.

The big challenge? Convincing consumers that fruit that's smaller or cracked might be better for you, and for the environment.

She and her fellow researchers at Parlier are hoping to get funding to continue looking at the antioxidant content of fruit grown with less water. They're not only analyzing pomegranates and peaches, but opuntia cacti and agretti (salsola soda), a gourmet vegetable from Italy that can be watered with salt water.

As The Salt previously has reported, other farmers in California who've been experimenting with so-called dry farming, which involves using far less water than normal, have found it can create much sweeter, more flavorful produce.

Meanwhile, researchers in Mexico, Thailand, Taiwan and Spain have managed to grow spicier peppers by giving them less water. But when UC scientists working with jalapeño growers in Santa Clara and San Benito counties tried repeating the experiment, the results were only lukewarm.