Accessibility links
Gladiator Gatorade? Ancient Athletes Had A Recovery Drink, Too : The Salt Gladiators guzzled a drink made from plant ash to help their bodies recover after a hard day of sword fighting, according to Roman accounts. New tests of old bones back up that idea. 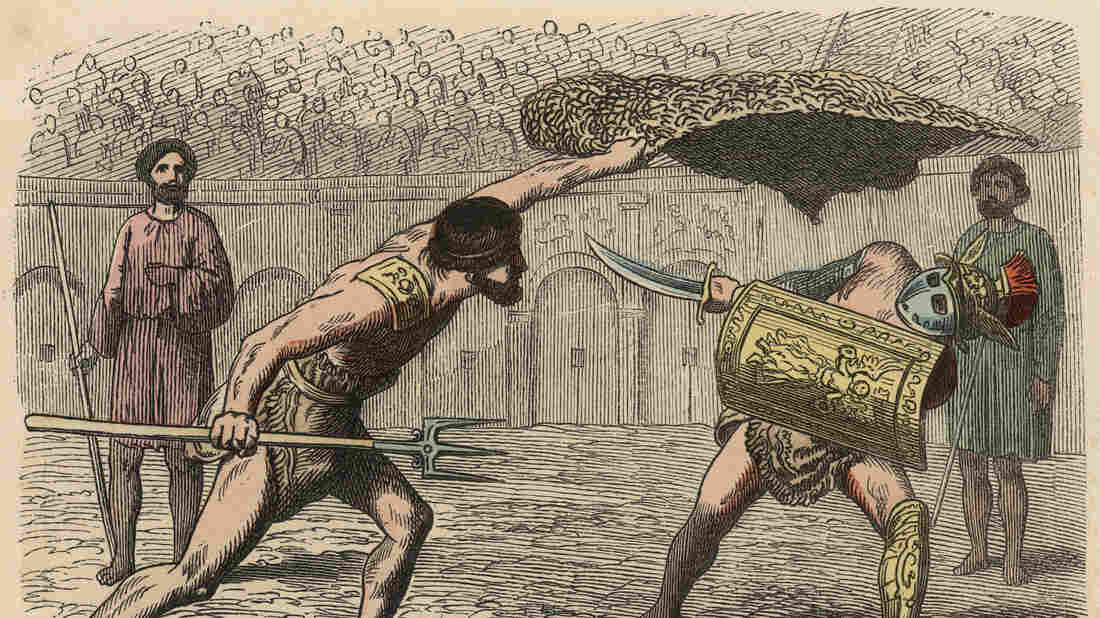 After a hard day of bruising battle, ancient gladiators reached for a post-workout drink, according to an ancient account. New research backs that up. Stefano Bianchetti/Corbis hide caption 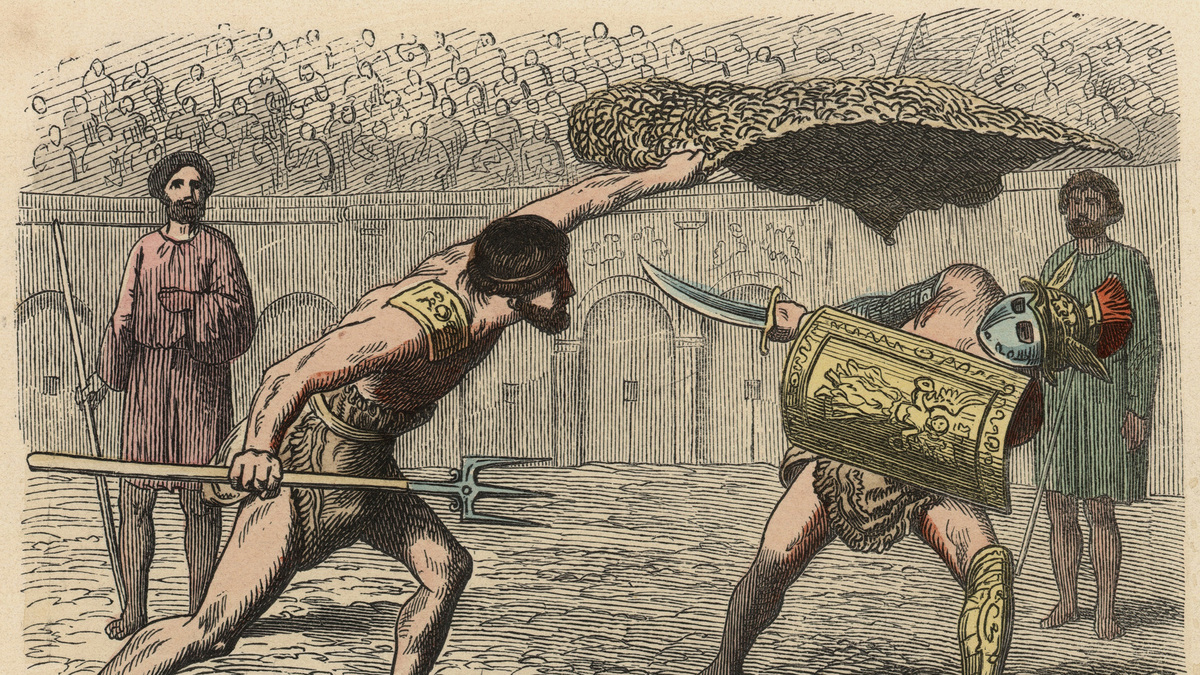 After a hard day of bruising battle, ancient gladiators reached for a post-workout drink, according to an ancient account. New research backs that up.

So it's A.D. 150, and you've just had a long day at the gym (or ludus), thrusting and parrying with your fellow Roman gladiators. What do you reach for to replenish your sapped strength? A post-workout recovery drink, of course.

Modern-day athletes often nurse their muscles with supplement shakes or chocolate milk after a workout. Similarly, gladiators, the sports stars of the Roman Empire, may have guzzled a drink made from the ashes of charred plants — a rich source of calcium, which is essential for building bones, researchers report this month in the journal PLOS One.

"Plant ashes were evidently consumed to fortify the body after physical exertion, and to promote better bone healing," Fabian Kanz, a forensic anthropologist at the Medical University of Vienna who led the research, said in a statement. "Things were similar then to what we do today."

Evidence for this ancient dietary supplement comes from a second-century cemetery for gladiators in what was once the great Roman city of Ephesus, in modern-day Turkey. Kanz and his colleagues have been studying the remains buried there to unravel how these athletes lived. To figure out what they ate, the researchers examined the remains of 22 gladiators using stable carbon and nitrogen isotope ratio analysis.

Carbon can tell us about the plants these people ate, while nitrogen offers hints of their animal protein consumption. The gladiators were eating a pretty varied diet, the analysis showed. Some went heavier on the grains and greens; some ate more meat. 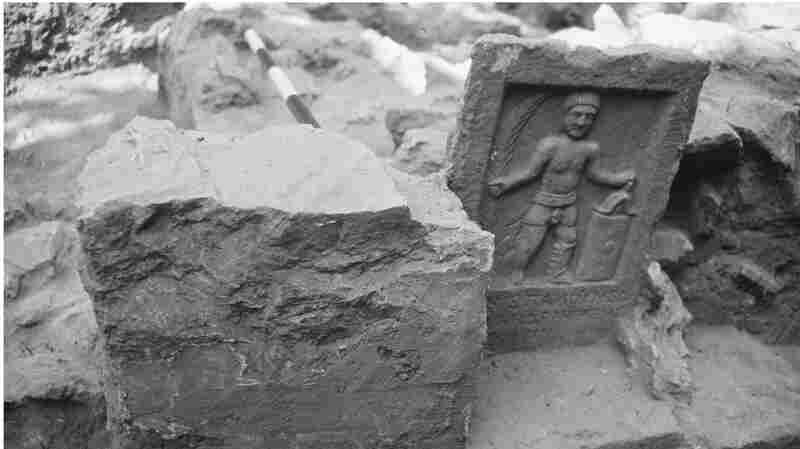 This gladiator tombstone was excavated in a cemetery for these ancient power athletes in what was once Ephesus, in modern-day Turkey. Courtesy of PLOS ONE hide caption

toggle caption
Courtesy of PLOS ONE 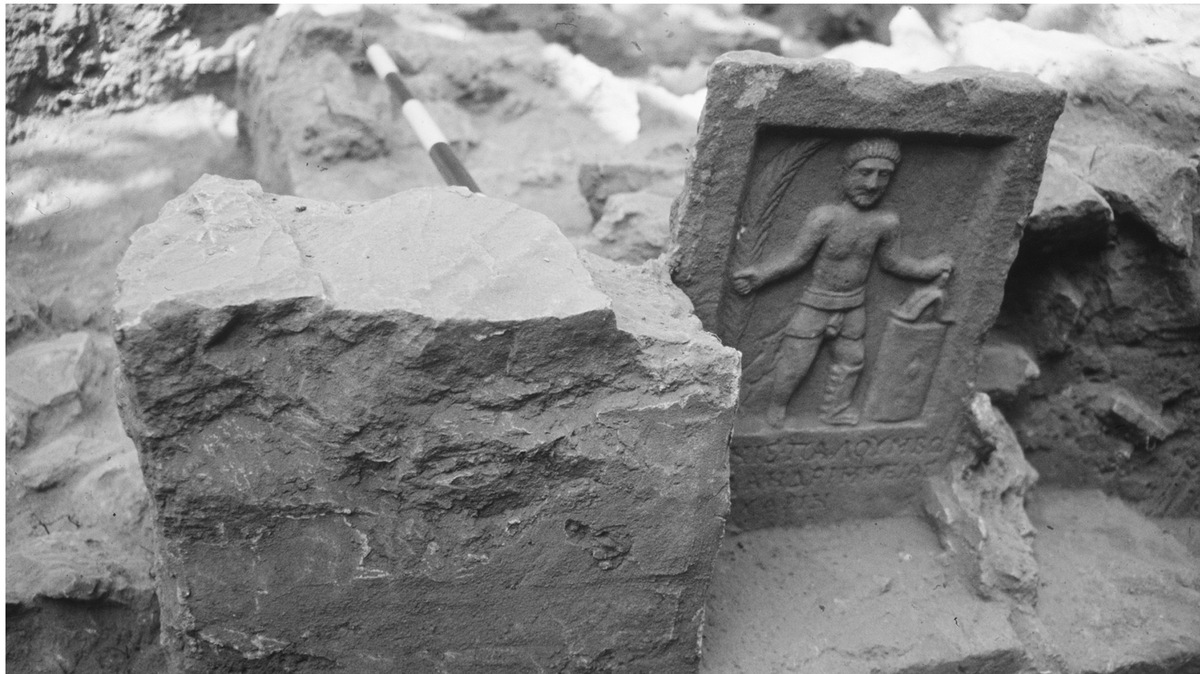 This gladiator tombstone was excavated in a cemetery for these ancient power athletes in what was once Ephesus, in modern-day Turkey.

Courtesy of PLOS ONE

When the same tests were run on the remains of 31 regular folks from that era and region, they found the same sorts of variation. In other words, gladiators seemed to be eating the same way as everyone else.

But the researchers also decided to look at the trace elements of strontium and calcium in those old bones. And that's where a huge difference jumped out. Compared with the regular Joes, the gladiators had a much larger ratio of strontium to calcium.

"This is strong evidence that the gladiators were consuming something high in calcium to replenish their calcium stores that other people weren't and that didn't show up in the isotopes," says Kristina Killgrove, a biological anthropologist at the University of West Florida who studies imperial Rome through ancient bones.

The researchers wondered: If the gladiators weren't eating more meat than their contemporaries, then where was this calcium boost coming from? A nearly 2,000-year-old encyclopedia offered a tantalizing clue.

In his Naturalis Historia, published in the first century, Pliny the Elder wrote: "Your hearth should be your medicine chest. Drink lye made from its ashes, and you will be cured. One can see how gladiators after a combat are helped by drinking this."

It's a neat bit of detective work, and it ties in nicely with historical accounts, Killgrove says, but the case isn't closed.

"It's entirely possible gladiators were drinking ash drink," she says, "but they haven't proven it." The problem? Dairy doesn't show up in isotopes, so the gladiators could have been chowing down on more cheese and yogurt than the rest of the population.

One other thing to note: Ancient texts don't always agree on the finer points of gladiator diets. For instance, Pliny credited the warriors' diet — a bean and barley mash was standard fare — for their endurance and toughness in battle. But Galen, a famous second-century physician who also did a stint as a gladiator doc, complained that this diet made the men soft and flabby.

The thinking is that gladiators loaded up on carbs to create a layer of fat to protect them from cuts and slashes in the arena, says Barry Strauss, a classics scholar at Cornell University and author of The Spartacus War, about the most famous gladiator of them all.

Hmm, that's a far cry from the rippling muscles Russell Crowe sported in the 2000 film Gladiator. So were these ancient warriors more hunky or chunky?

"By and large, we are seeing them with their armor on," Strauss says. "They're not showing their abs, so I don't think we know. We do know they were sex symbols — there's a lot written about noble women hanging out with gladiators."

Footnotes: Since we're talking ancient history here, it seems appropriate to include some footnotes. Thanks to Kathleen Coleman of Harvard University for confirming that translation of Pliny on the ash drink (it's a fairly obscure reference), and to Susan Mattern of the University of Georgia for breaking down some of Galen's thoughts on food and medicine for me. Her book on the subject is called The Prince of Medicine: Galen And The Roman Empire. If you're curious about what bone biochemistry can reveal about history, Kristina Killgrove's blog, Powered by Osteons, is a fun read.